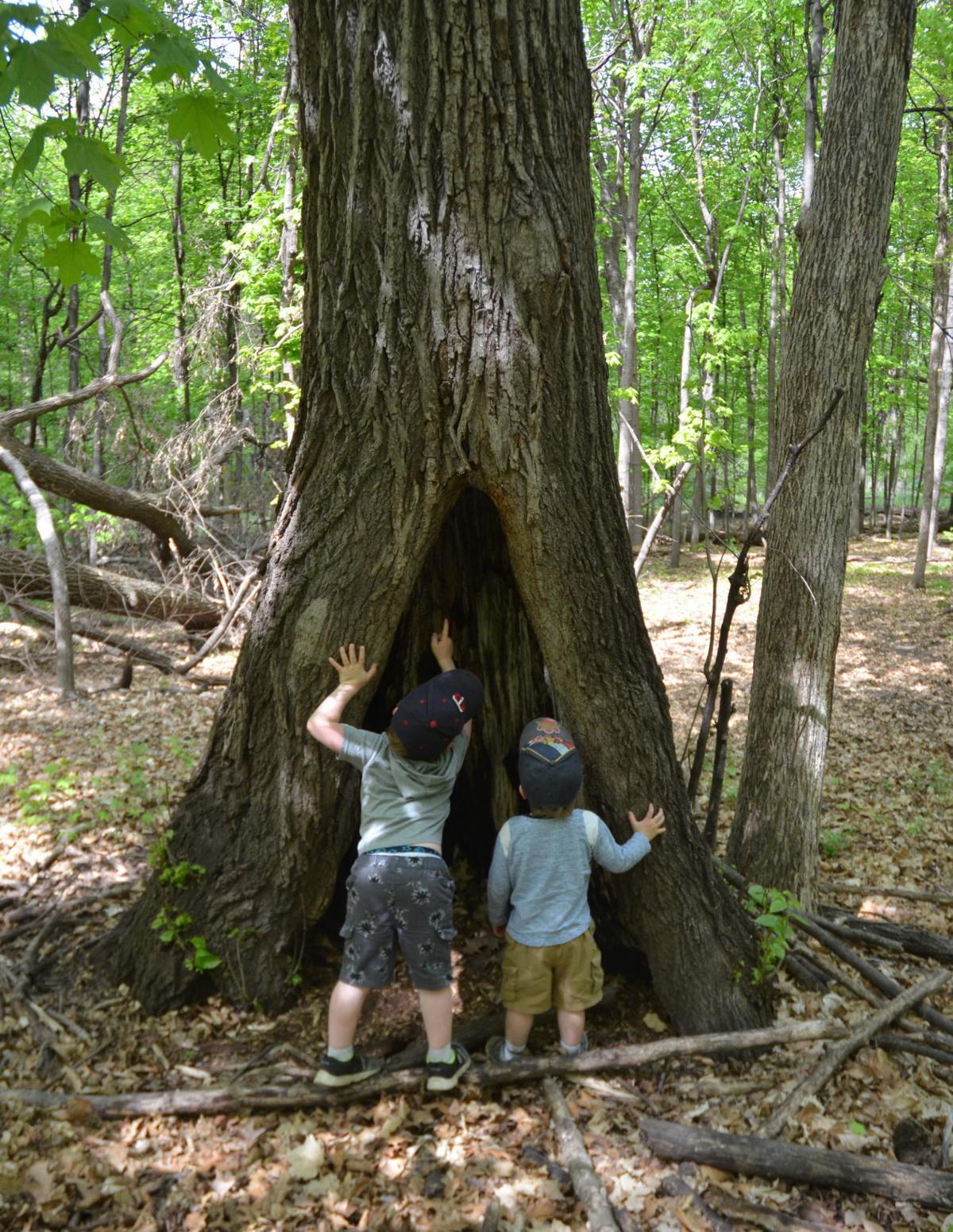 William May Park offers plenty of room to get lost in its 71.5-acre forest of maple trees. There’s also plenty of holes in those trees to explore. 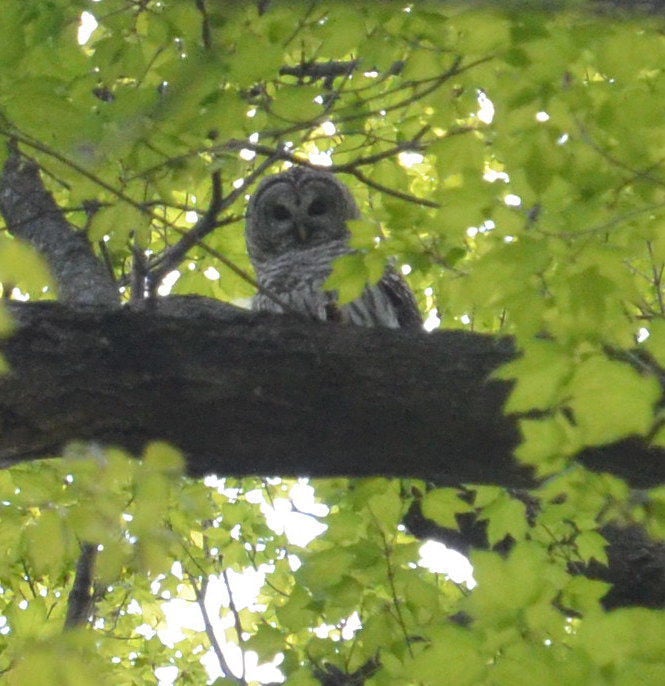 This barred owl was not pleased that we interrupted its snake dinner. 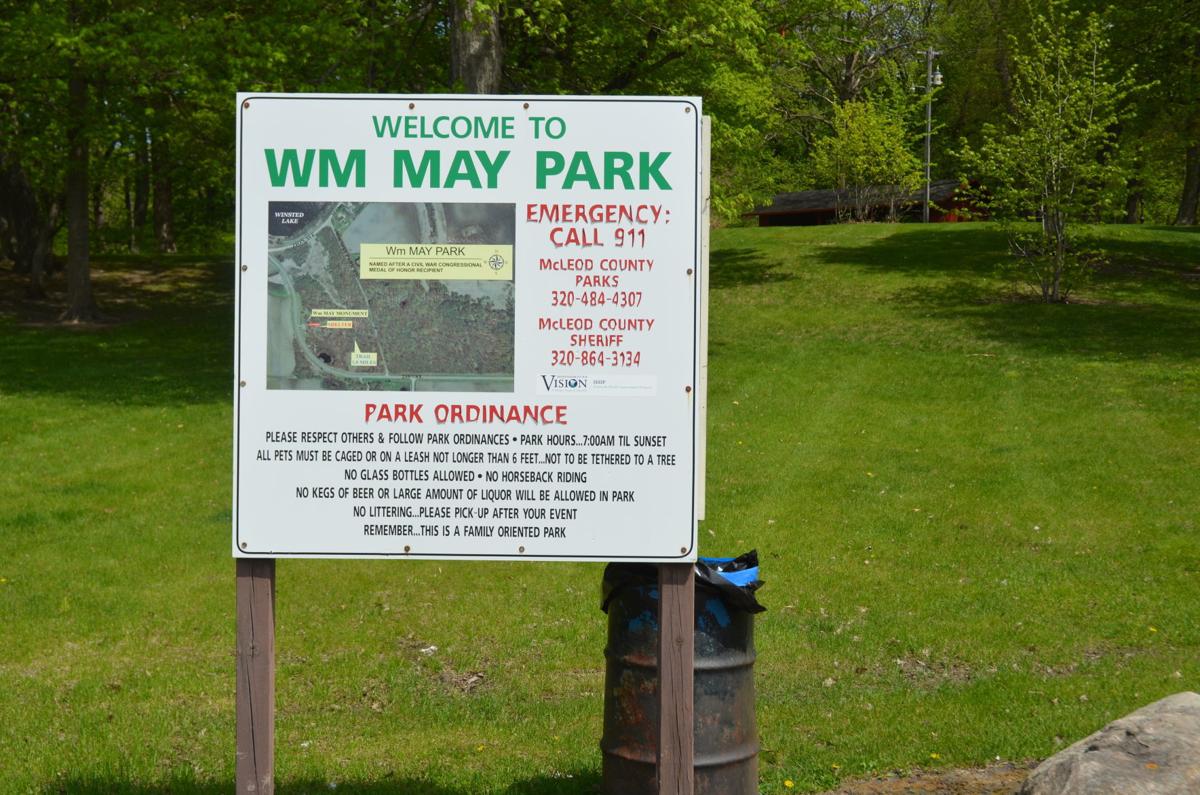 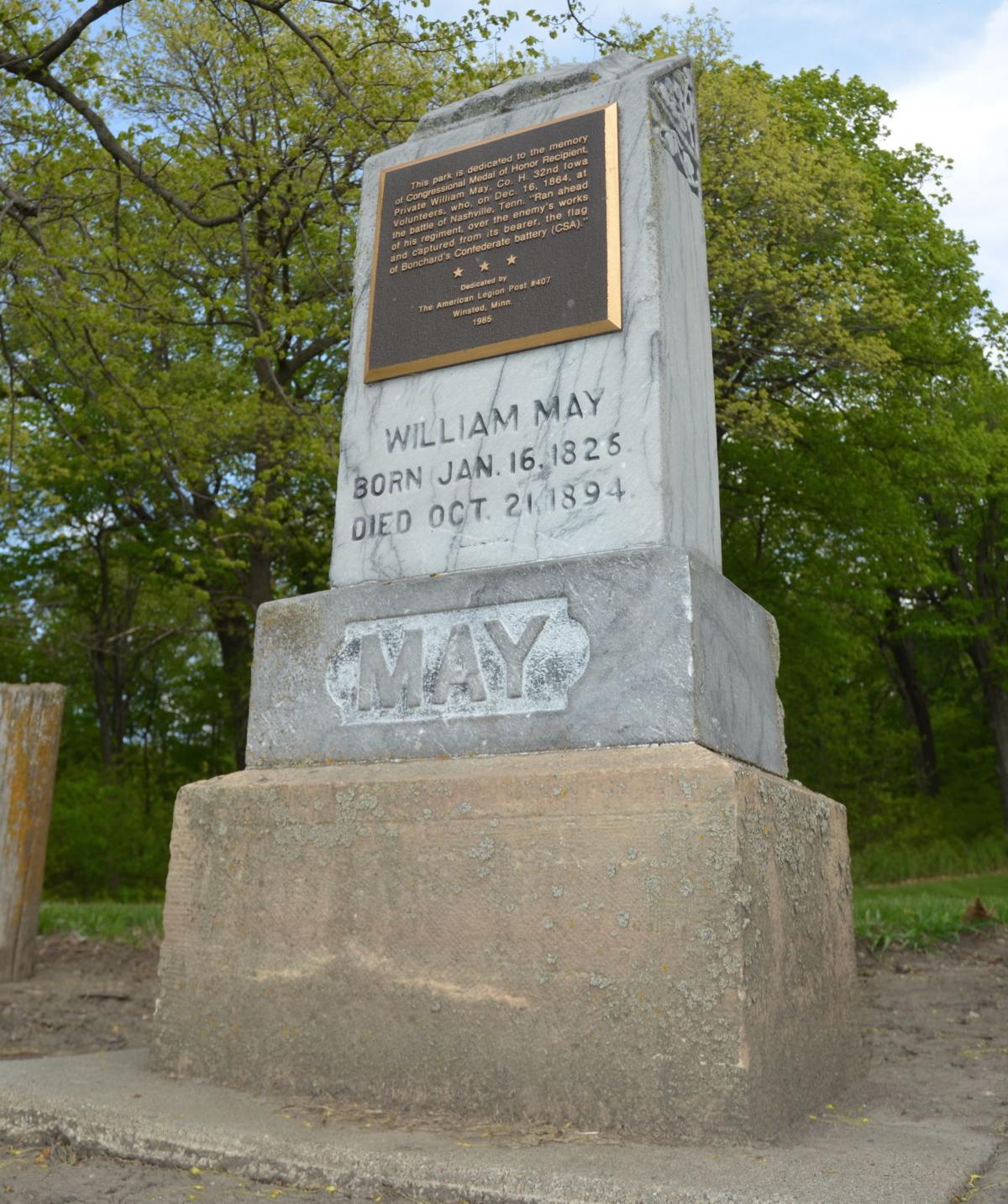 This monument at William May Park honors the park’s namesake, a Civil War Congressional Medal of Honor recipient who lived in Winsted. 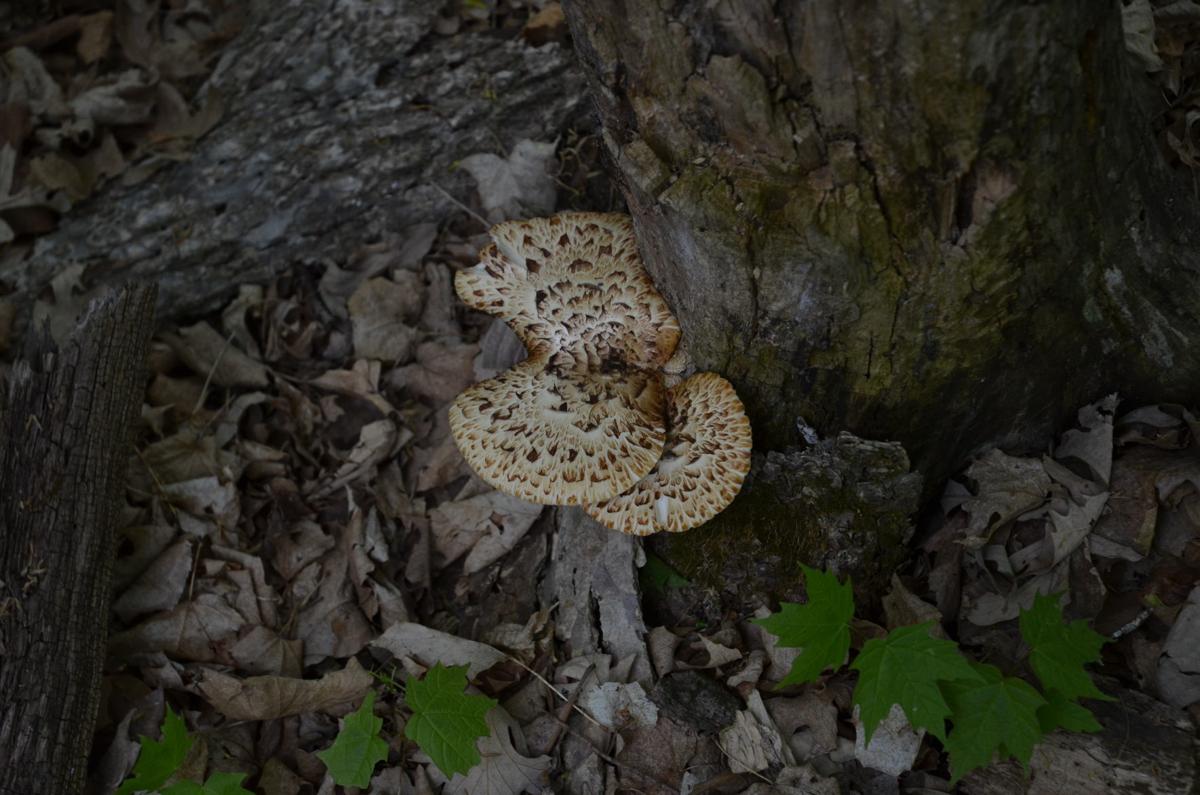 This is a photo of pheasant back, a type of fungus that grows on trees. It earned its name for its resemblance to pheasant feathers. 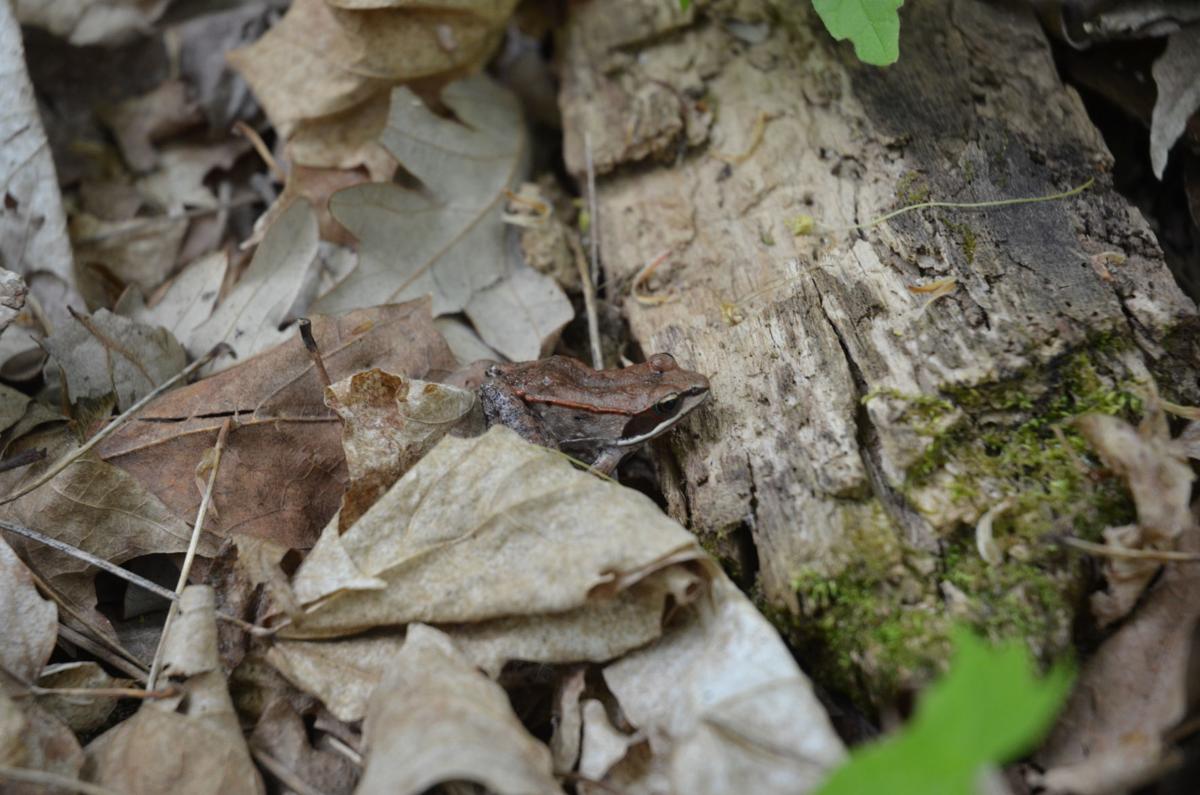 Here's a little frog we met on our hike. 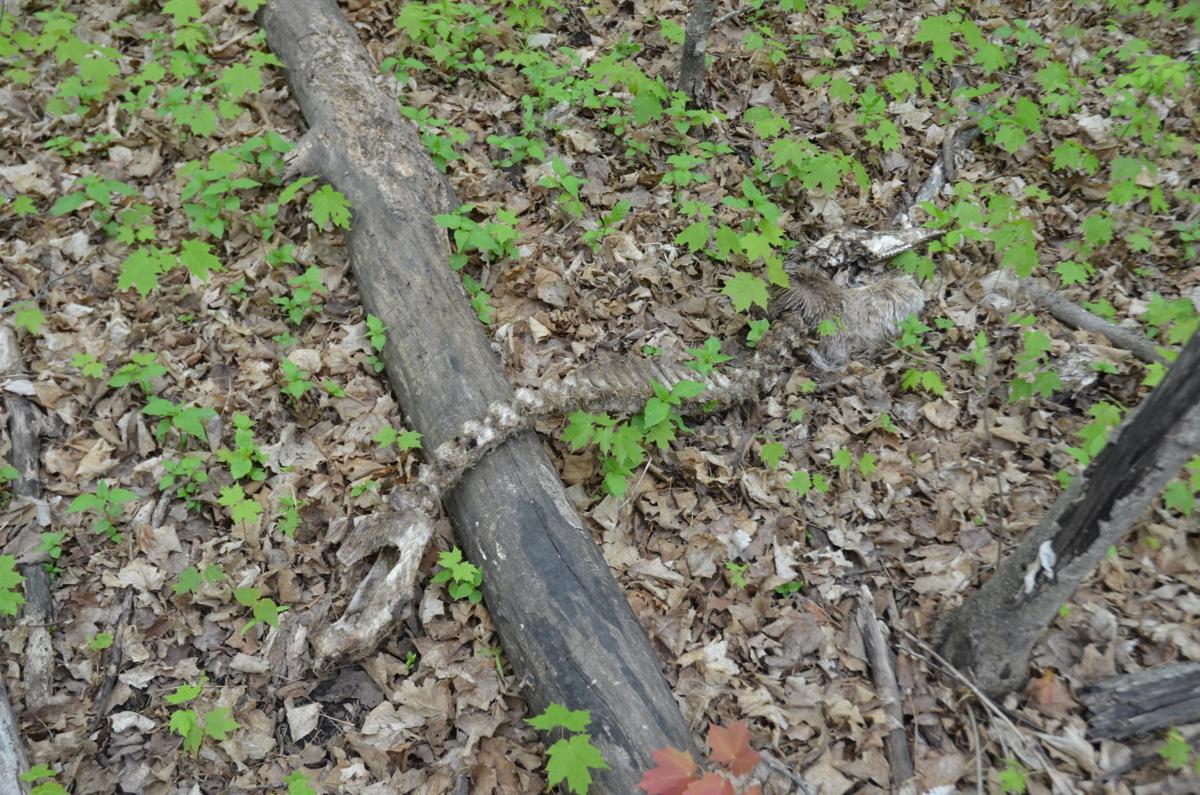 Here were the remains we found of what appeared to have been a deer. 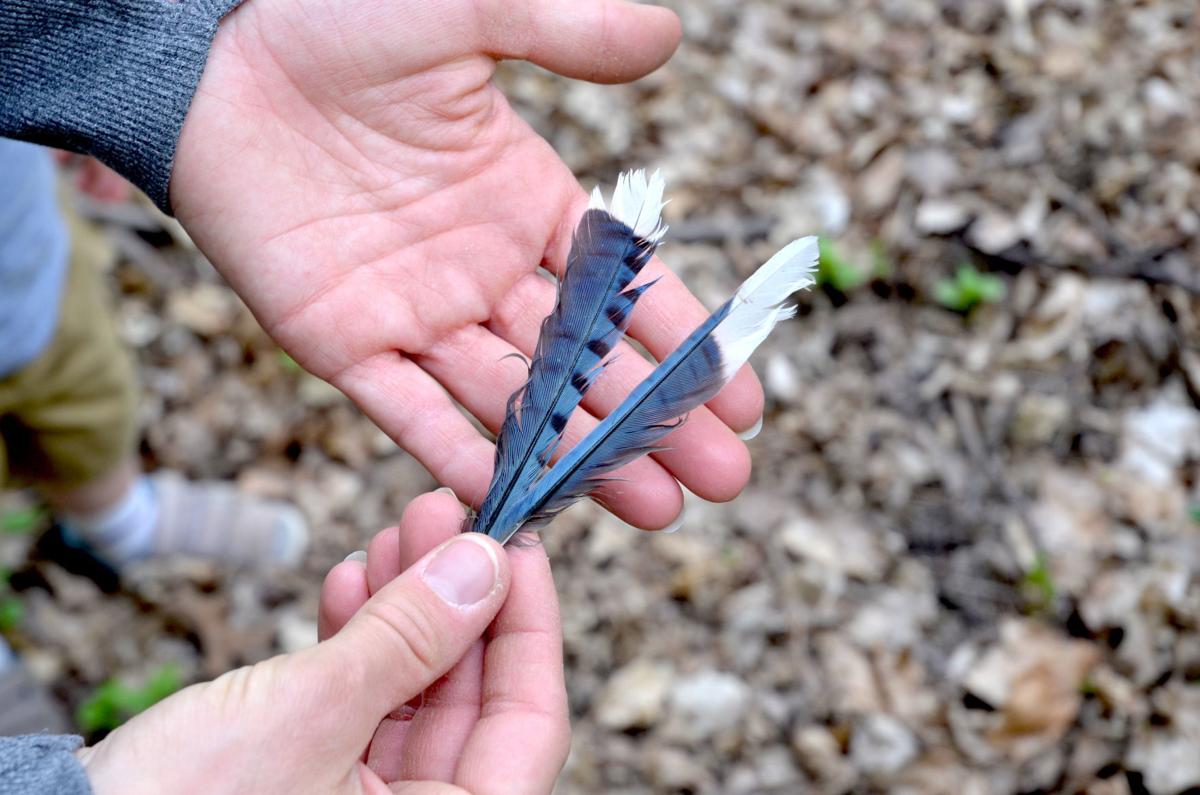 We found lots of feathers during our hike, but these blue jay feathers with their vibrant colors were our favorite discovery.

Have you ever wanted to just get lost? To walk into the woods and lose yourself for a bit with nature and wildlife?

If that sounds like the kind of McLeod County park adventure you’re looking for, then William May Park 3 miles east of Winsted off 235th Street is the spot for you.

When we first arrived at the park, we took a slow ride down William May Park Road, which cuts through the middle of the park. Less than a minute into the drive and we enjoyed our first thrill of the trip, a barred owl sitting on a branch just off the road with what appeared to be a snake in its grasp. It didn’t take kindly to us interrupting its meal and flew off, but we got a terrific view of its wingspan and gorgeous face. And fortunately, this was not the last of our wildlife encounters as William May provided the greatest variety of nature that we’ve spotted in our trips to four parks so far.

After our short drive through, we circled back to find the official entrance and parking lot to the 71.5-acre park.

Like all McLeod County parks, William May features a picnic shelter, tables and grill to enjoy day visits. These features all sit on top of a hill leading up from the parking lot, and if you have small children like ours, they won’t need much convincing to take a good roll down the slope.

But when you first arrive at William May Park, like us, your first question will likely be, “What’s that small monument north of the parking lot?”

William May Park was dedicated in 1985 and named after a Civil War Congressional Medal of Honor recipient who settled in Winsted after the war. According to the plaque on the monument, he was a member of Company H 32nd Iowa Infantry, and at the battle of Nashville, Tennessee, he “ran ahead of his regiment, over the enemy’s works and captured from its bearer, the flag of Bonchard’s Confederate battery.” He is buried in Winsted. So along with nature, William May Park offers a bit of local history as well.

We don’t know if May enjoyed long walks in the woods and communing with nature, but if he did, he would be proud of his namesake park. After examining the monument and making our way up the hill to the picnic shelter, we began our hike down the 1-mile trail. As I’ve said in the past, one of my sons’ favorite pastimes on these hikes is throwing rocks into water. Although Winsted Lake is nearby, William May does not include any water for skipping stones. However, it does have an abundance of hollowed out trees, which is perfect for another of my boys’ favorite pastimes, checking out the vacant holes in trees, or “leprechaun houses” as they call them.

The trail at William May weaves its way through a large stand of maple trees. While some parks are so thick you can’t veer far from the trail, this park is spacious with a tall canopy that allows even the smallest of people to set off from the cleared path and do a bit of trail blazing. That’s exactly what we did, and while we never truly lost our way, we were fully emerged in wilderness.

It was during this off-the-path part of our hike that we made most of our favorite discoveries in the park.

Along with the owl we saw earlier in the trip, we also spotted a snake that was not yet someone’s lunch, and a small frog that blended perfectly in with the leaves on the forest floor. My wife is not a fan of amphibians, but I’m friendly and have no problems scooping the frog up for a closer look with my sons. When we were finished, we put the frog back on a large growth of pheasant back, a type of fungus we found growing on a tree stump.

As we continued our trek we found the remains of more wildlife: a fully intact spine and skull to what appeared to have been a deer, picked clean by some other wildlife that we were glad we did not see. We also found lots of bird feathers scattered throughout William May, including a pair of blue jay feathers that were the cherry on top of our day.