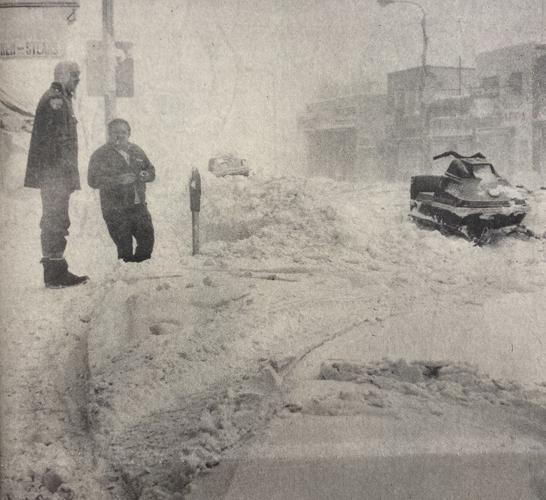 Downtown Hutchinson was filled with snow and dirt piled up during the raging blizzard. Pictured is Jim DuHamel outside Christy’s, where he was snowbound, talking to police officer Al Cheney. Snowmobiles, the only mode of vehicular transportation feasible, were parked along Main Street. 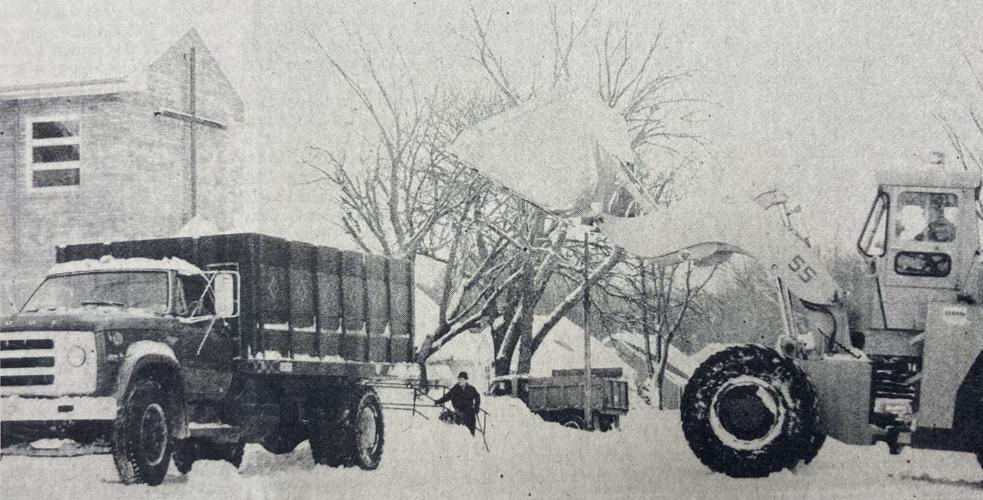 As one truck is loaded with snow, another in the background pulled up to be loaded as residential areas were cleared. About 14 inches of snow was dumped on Hutchinson during the January 1975 blizzard.

Downtown Hutchinson was filled with snow and dirt piled up during the raging blizzard. Pictured is Jim DuHamel outside Christy’s, where he was snowbound, talking to police officer Al Cheney. Snowmobiles, the only mode of vehicular transportation feasible, were parked along Main Street.

As one truck is loaded with snow, another in the background pulled up to be loaded as residential areas were cleared. About 14 inches of snow was dumped on Hutchinson during the January 1975 blizzard.

A good storm is something almost all people can relate to. Most everyone has been through a big clapping thunderstorm or the occasional snow clipper. Some have even been witness to a tornado or hurricane if they travel down south. Once and awhile, however, a storm builds up so violently that its ferocity cements it in the history books. In Minnesota, we know this all too well.

The North Country has seen its fair share of violent storms, especially in winter. Recent memory rekindles vivid images of the Halloween Blizzard. Reaching back into history there was the Children’s Blizzard of 1888 that killed hundreds of settlers, and no one can ever forget the famous and deadly Armistice Day Storm of 1940. Only one storm has earned the nickname “Storm of the Century,” however, as it was one of the most terrible storms to cut through Minnesota in the 20th century.

It was January 1975. The decade was half over and a new era was on the horizon. It was the year the war in Vietnam would come to an end, gas prices would begin to rise as OPEC raised the price of crude oil by 10%, and the “shock-rock” band Kiss would take the music world by storm. In Minnesota, fans of the Minnesota Vikings were gearing up to watch Fran Tarkenton and the Purple People Eaters battle the Pittsburgh Steelers in their third bid for a Super Bowl title — the previous two ending in losses.

While people across the Midwest looked forward to the new year ahead, Mother Nature was concocting a recipe for disaster across the region. A storm was brewing over the Pacific Ocean with gale-force winds. The storm headed east, building in strength as it moved over the Rocky Mountains. In the Midwest, an arctic cold front was settling in from Canada, and large amounts of warm tropical air were pushing northward. Together, these factors combined to create a perfect storm that would be anything but perfect for those in its path.

The storm pulled into the central plains, and with it came a string of violent thunderstorms that produced 45 tornadoes. As the storm moved north and mixed with the frigid cold front, the moisture turned to snow and began falling on Jan. 10. Over the next two days, more than a foot of snow fell across Minnesota with more than 2 feet recorded in some places. In addition to the copious amounts of snow, sustained winds of 30-50 mph whipped across the land and drove the snow into massive drifts.

Those caught in the storm quickly became trapped. In Willmar, 168 passengers became stranded and were stuck in a train for hours as the wind chill made it too dangerous to venture outside. As conditions deteriorated, motorists, especially in the countryside, found themselves stuck and were forced to seek shelter on nearby farms. In addition, some school children being bused to their rural homes were forced to stay the night with neighbors or relatives as the roads became impassable.

In the towns and cities, police stations became ground zero staging areas for patrolmen on snowmobiles to make their rounds checking in on the elderly, as well as the security of business places that were closed due to the weather. In several communities, local snowmobile clubs aided by delivering supplies and performing welfare checks.

In Minnesota, the storm lasted until Sunday, Jan. 12. It was Super Bowl Sunday. People hunkered down in their homes as the winds outside blew with a fury that created a sub-zero wind chill. The worst of the storm was now over, and as friends and family gathered to watch the Vikings in the Super Bowl, they hoped that their beloved team would escape the curse that recently plagued the weather. Unfortunately, the team fell short and lost to the Steelers 16-6.