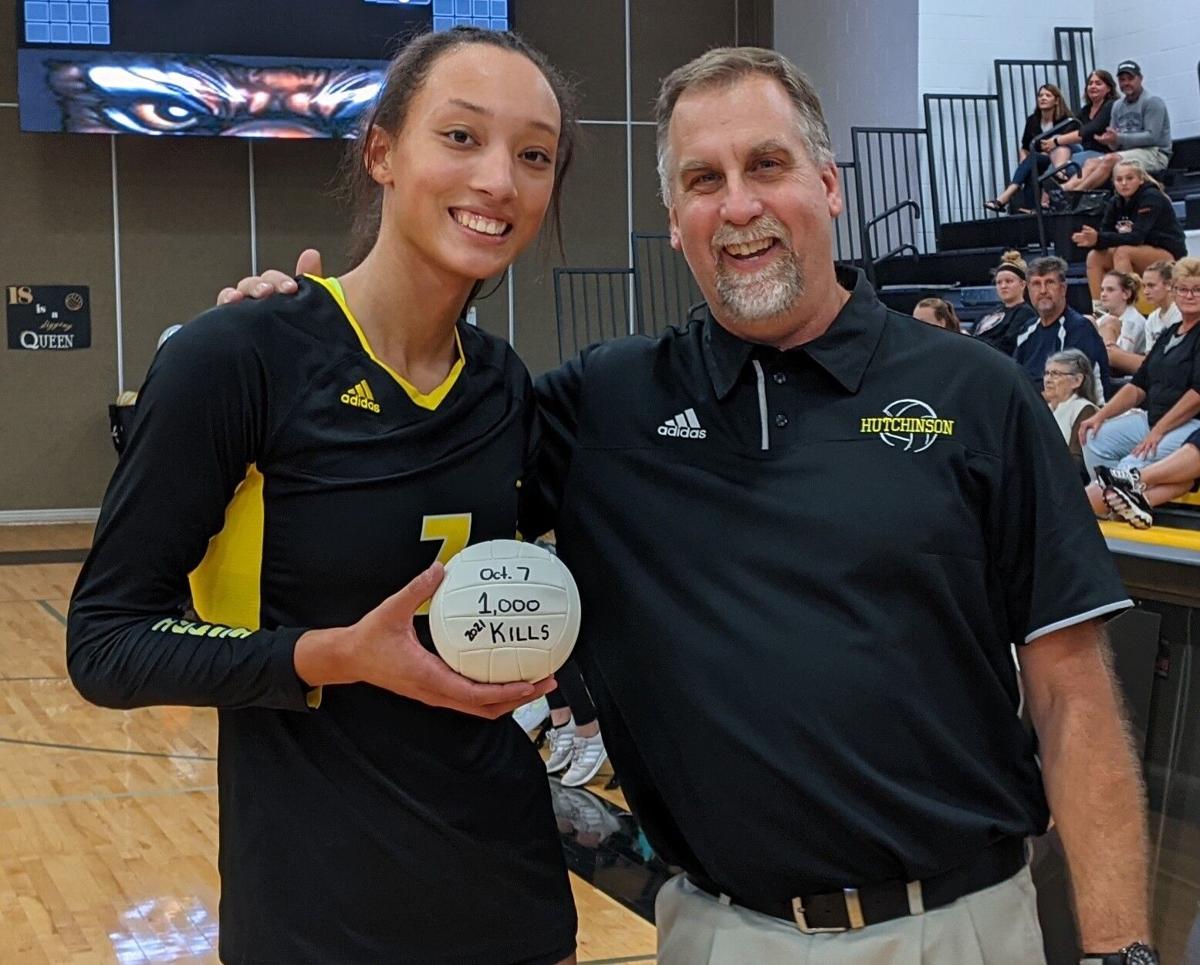 Hutchinson senior volleyball player Adri Rhoda celebrated reaching the 1,000-kills mark and setting a new school record in kills with her coach, Dennis Piechowski, during a home game this month. 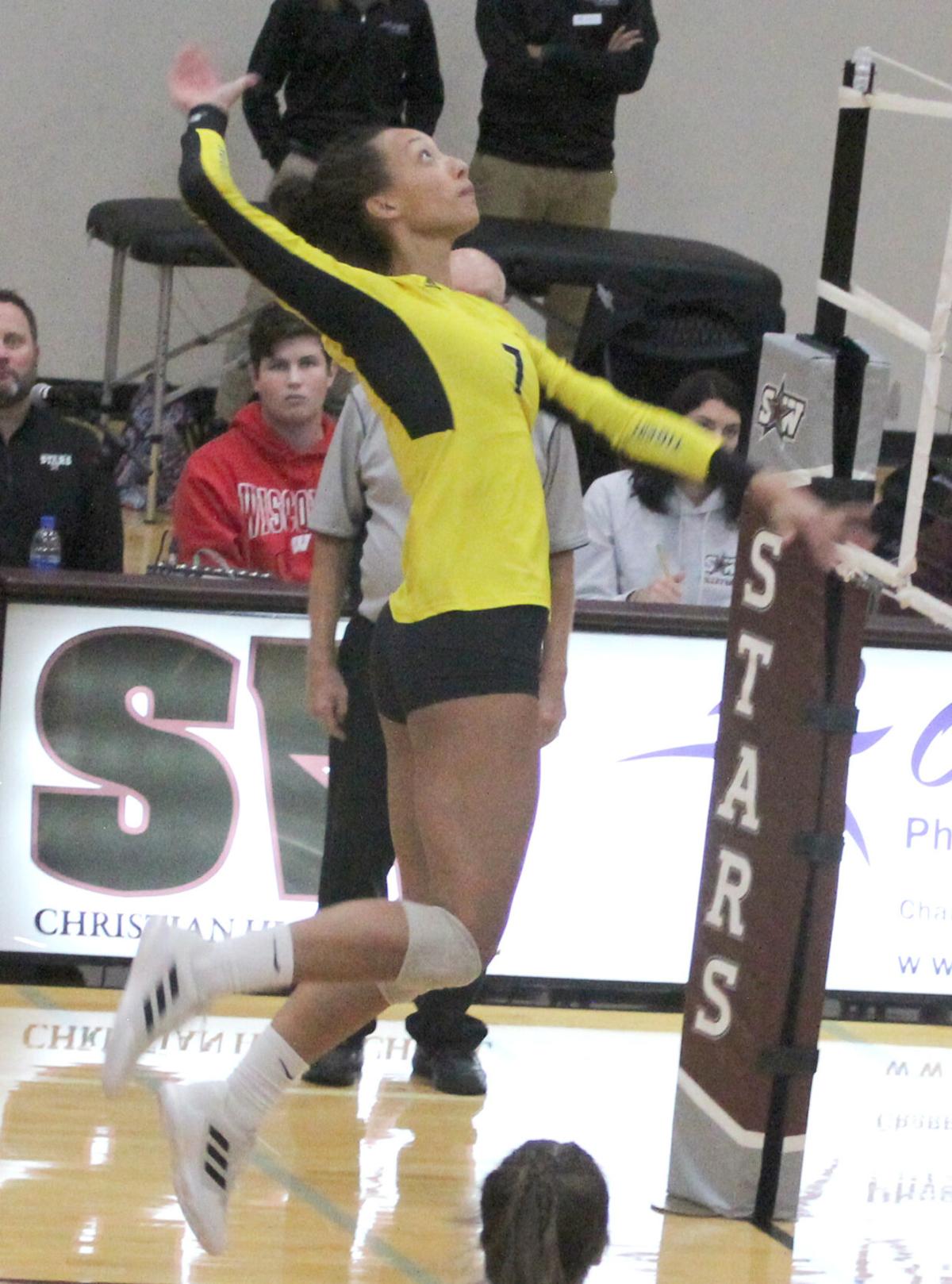 Adri Rhoda goes up for a hit last week during Hutchinson’s match against Southwest Christian. Rhoda will see lots of tough competition next year as well when she joins the Middle Tennessee State University volleyball team, a Division I program.

Hutchinson senior volleyball player Adri Rhoda celebrated reaching the 1,000-kills mark and setting a new school record in kills with her coach, Dennis Piechowski, during a home game this month.

Adri Rhoda goes up for a hit last week during Hutchinson’s match against Southwest Christian. Rhoda will see lots of tough competition next year as well when she joins the Middle Tennessee State University volleyball team, a Division I program.

The set is timed perfectly. You take a few steps toward the net and leap into the air. Defenders try to get to you, but there’s nothing they can do as you drive a spike into the gymnasium floor. The home crowd goes wild and you feel your adrenaline surge.

Unless you’ve played volleyball, this is probably not something you’ve experienced. But for Hutchinson senior Adri Rhoda, it’s a feeling she knows well. In fact, as the Tigers’ new all-time kills leader, she’s experienced this rush more than 1,000 times during her career at Hutchinson High School.

“This sounds mean, but knowing that you kind of let the air out of their balloon (feels good), especially on big points,” Rhoda said as she described what it’s like to be the team’s killer queen. “It’s being the person that the crowd cheers for and your team gets excited for. Knowing their team talked about you and tells each other that they need to do something so you don’t score, it gives you such confidence and you get so excited.”

Hitting that milestone is no small feat. A player has to average at least 250 kills per year for four years. And after a shortened season last year due to COVID, Rhoda had to make up for it with an even bigger season this year. But she’s proud of reaching that milestone and breaking the school record formerly held by 2016 graduate Erin Corrigan. It puts her in a group of former Tigers with whom she’s honored to be included.

For all the great hitters who have come through Hutchinson, it may be surprising to some that Rhoda is the first to reach the 1,000-kills mark, as far as head coach Dennis Piechowski is aware. And this is his 17th year coaching the team.

Part of the reason, he said, is because the program is not as deep as it once was.

When Piechowski started as coach, very few players joined varsity as freshmen because there were plenty of upperclassmen to fill the roster. As the program has thinned out in recent years, however, it’s allowed some players, such as Rhoda, the chance to play varsity longer. But that doesn’t take anything away from the accomplishment.

Rhoda said she started playing volleyball as a fourth-grader in New Ulm. Eventually she moved to Hutchinson, and thanks to her physical size and skills, Tigers coaches took notice.

“She’s athletic, she had height back then, she jumps and moves and does quite well,” Piechowski recalled. “It’s like, we’ve got to get a kid this caliber, this type of talent, we have to get them into our program.”

She joined varsity as a freshman and had to be “tested,” according to Piechowski, who added that she passed the test and became a regular contributor at a young age. That’s also when she started to focus more on her future.

“It was between basketball and volleyball,” Rhoda said about her favorite sports. “Eventually my sophomore year I realized that’s what I wanted (volleyball), that’s what I liked more and wanted to do in college. So I decided to focus on that more and pursue that.”

It was also about her sophomore year that she realized the team kills record and 1,000-kills mark were a possibility.

“I think when I realized I was an important part of the team, and I realized how much I actually was scoring, that I could reach that eventually if I continued to play how I was,” she said.

But Rhoda hasn’t played like she did as an underclassmen. She’s become a better, more diverse player, Piechowski said. She does a better job of seeing the defense and knowing where to score. After all, just hitting the ball hard doesn’t help if you’re smacking it into a blocker.

“Early on, ninth and tenth grade, she was strictly a line hitter,” he said. “She would hit only balls down the line and it was either in or out. She was really predictable. … She’s been able to develop shots where she can go line, she can go cross, she can go deep corners, she can tip. So that’s been one thing she’s been able to do, just develop an array of shots.”

Piechowski also credited her improved jumping ability. While she stands about 6-foot-2, she touches 10-foot-3

“I had one coach tell me, ‘That’s unfair,’” Piechowski said. “She jumps so tall and she plays so high that most kids can’t even get to that point. So if she’s off, or the sets a little off or the timing’s not there, it looks like she’s hanging but really she’s just jumped and reached so high that she’s got more time to figure out what to do.”

Lastly, Rhoda and her coaches have worked on making her a six-rotation player. So she’s gone from being an outside hitter to now playing outside, right side, middle and back, keeping her on the floor longer and giving her more opportunities to score.

Those developed skills have also presented her with another opportunity: college. Rhoda has committed to playing Division I volleyball at Middle Tennessee State University. Although she had never been to Tennessee before, she said the coaches and players made it seem familiar during her visit.

“It’s pretty far away, but it’s a good program and I know that I’ll play there and I can help the team there,” she said. “And I really loved the coaches. It was like instant. My mom cried so many times when we were on our visit, it was like a second family.”

But before Rhoda joins the Blue Raiders next fall, she and her Tiger teammates have unfinished business.

Hutchinson wrapped up its regular season Monday with a match against Watertown-Mayer, and then the Section 2AAA playoffs are scheduled to begin with the quarterfinals Wednesday, Oct. 27.

The Tigers didn’t know who or where they would be playing that opening match when this issue of the Leader went to press, but they do know that no matter what, any road to state will likely lead through Marshall, the No. 1-ranked team in state.

Hutchinson and its top killer know they’ll have their hands full in the playoffs, but they are looking forward to the opportunity for one more shot at the best in state. They just need to have confidence.

“We’ve been working really hard,” Rhoda said. “Obviously we know that if we make it as far as we want to, it’s probably going to be Marshall. So we know with playing them at the beginning of the season we’ve had some time to prepare and figure out the kinks in our team. I think we’ve done that really well, and we just have to play like we know we can.”