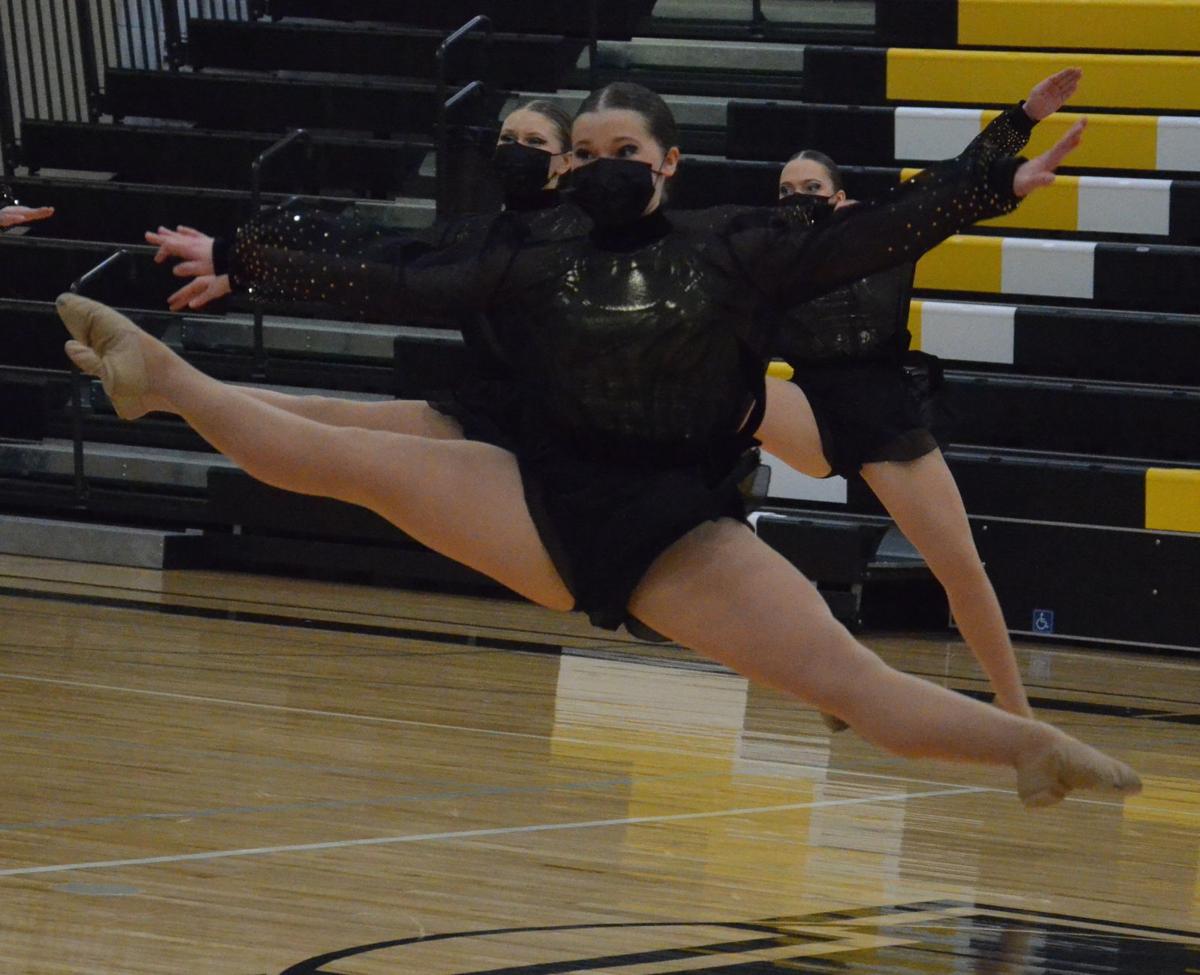 Karlie Whittington gets some air with a leap during Hutchinson’s jazz routine Friday. 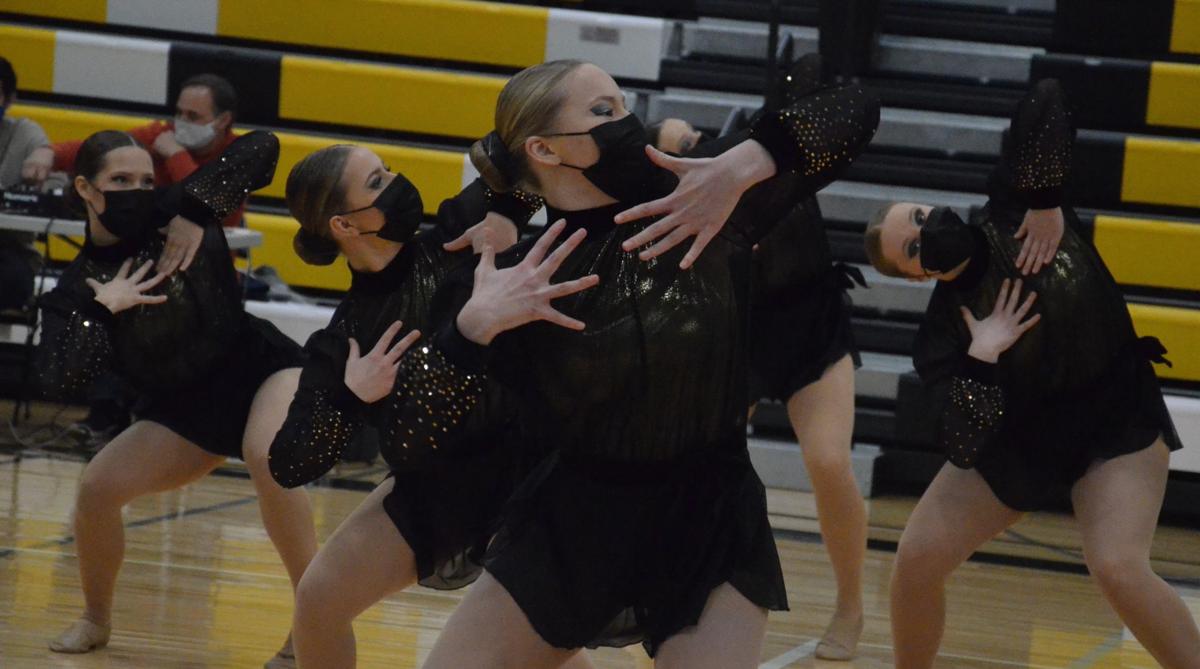 Mady Heller and other members of the Hutchinson dance team put on a performance of their jazz routine Friday in Hutchinson during the Wright County Conference jazz competition. The Showstoppers took fourth and will look to keep improving before the conference championship Saturday.

Karlie Whittington gets some air with a leap during Hutchinson’s jazz routine Friday.

Mady Heller and other members of the Hutchinson dance team put on a performance of their jazz routine Friday in Hutchinson during the Wright County Conference jazz competition. The Showstoppers took fourth and will look to keep improving before the conference championship Saturday.

It’s been a little more than a month since the Hutchinson dance team began learning its jazz routine. On Friday, the Showstoppers got to perform on their home court as they danced to fourth out of six teams in the Wright County Conference jazz competition.

It’s not easy to learn a new dance in a month, but the Showstoppers were feeling good about Friday’s performance, and they likely felt the same about another fourth-place finish out of nine teams Saturday in the jazz competition at the St. Cloud Apollo Invite.

“It’s definitely been different this year, and I really like the dance,” said dancer Karlie Whittington. “It’s been really fun to perform it.”

“Last year we kind of decided we wanted to do more of a contemporary base instead of a lyrical, and we feel like we wanted to try something different,” dancer Allyson Kopesky said about the team’s jazz routine. “I feel like it’s going in the right direction, and I’m really proud of all of us for taking the leap.”

Leading up to the conference meet Friday, the Showstoppers knew it was time to solidify their routine and begin fine-tuning the choreography. With last weekend’s performances, the dancers are feeling confident they have the moves they want for the final push at the end of the year.

“I think it’s definitely improved,” dancer Tylee Plombon said. “We kind of had a come-to-Jesus moment at the beginning of (last week). Like, we really need to turn it around, and I think we did pretty well.”

“We did not start learning our jazz choreography until Jan. 9. And here it is, Feb. 12, we’re literally a month in and I’m very pleased with final product,” coach Stephanie Kutter said. “Our goal (last) week was to have a routine that we felt could be our section routine, because we want to make sure we perfect that.

“I feel like we have what we need, and our jazz team that we have competing is getting some of our highest scores in jazz that we’ve had,” Kutter added. “So we know the choreography is there, and it’s going to be all about practice and execution, and that’s what the girls are putting a lot of time into.”

The season is rapidly coming to a conclusion now with the Wright County Conference Championship Saturday at 3:15 p.m. at Mound Westonka High School. Not only will the Showstoppers be competing in jazz, they’ll also be competing for a top conference finish in the high kick.

Hutchinson missed the first WCC high kick meet on Feb. 4 when school was called due to the weather, but the conference has made a exception for the Showstoppers so they won’t be handicapped. They’re going to take the total points earned out of the five judges at Saturday’s meet and plug that into where it would have landed Hutchinson in the first conference high kick meet.

Kutter thanked the other conference coaches for allowing this exception and said the Showstoppers are looking forward to the conference finale.

“I think that’s a really good motivator for the girls,” she said. “It maybe puts a little extra pressure on, because then they know that Saturday is that much more important.”

Following the conference championship, there’s nothing else left but the section tournament, which Hutchinson is hosting this year at 10 a.m. Saturday, Feb. 27. To add to the excitement, the high school league recently announced its plans for state this year, and despite COVID-19 restrictions the tournament will look very similar to past years. That’s good news for dancers around the state, and especially for the Showstoppers who are aiming for a third-straight trip to the big stage.

“I feel like it was a really big motivator,” Kopesky said about the announcement. “For awhile it was kind of like, ‘What are we working for, what are we trying to improve toward?’ I feel like that state tournament is something on a pedestal and makes us work so much harder for.”

“We’re hosting sections,” Kutter said. “We’ve never done that before. So it’s one of those things where, gosh, we want to qualify on our home court.”