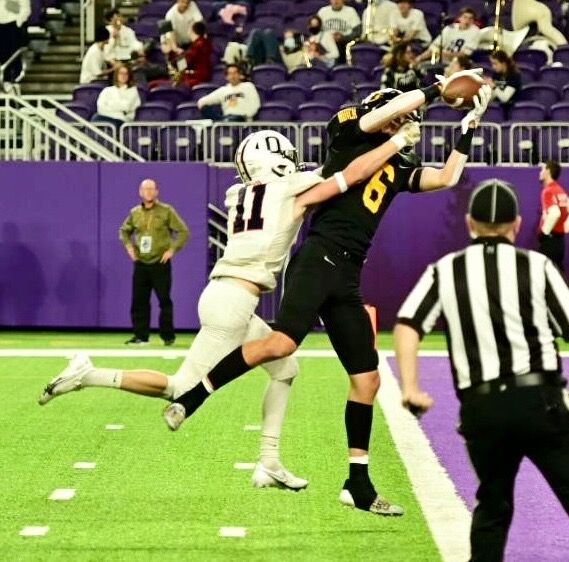 Sam Rensch hauls in a pass from quarterback Colin Nagel for a 29-yard touchdown Friday at U.S. Bank Stadium. The Tigers plowed through Orono for a 36-6 win to move on to the state finals Friday. 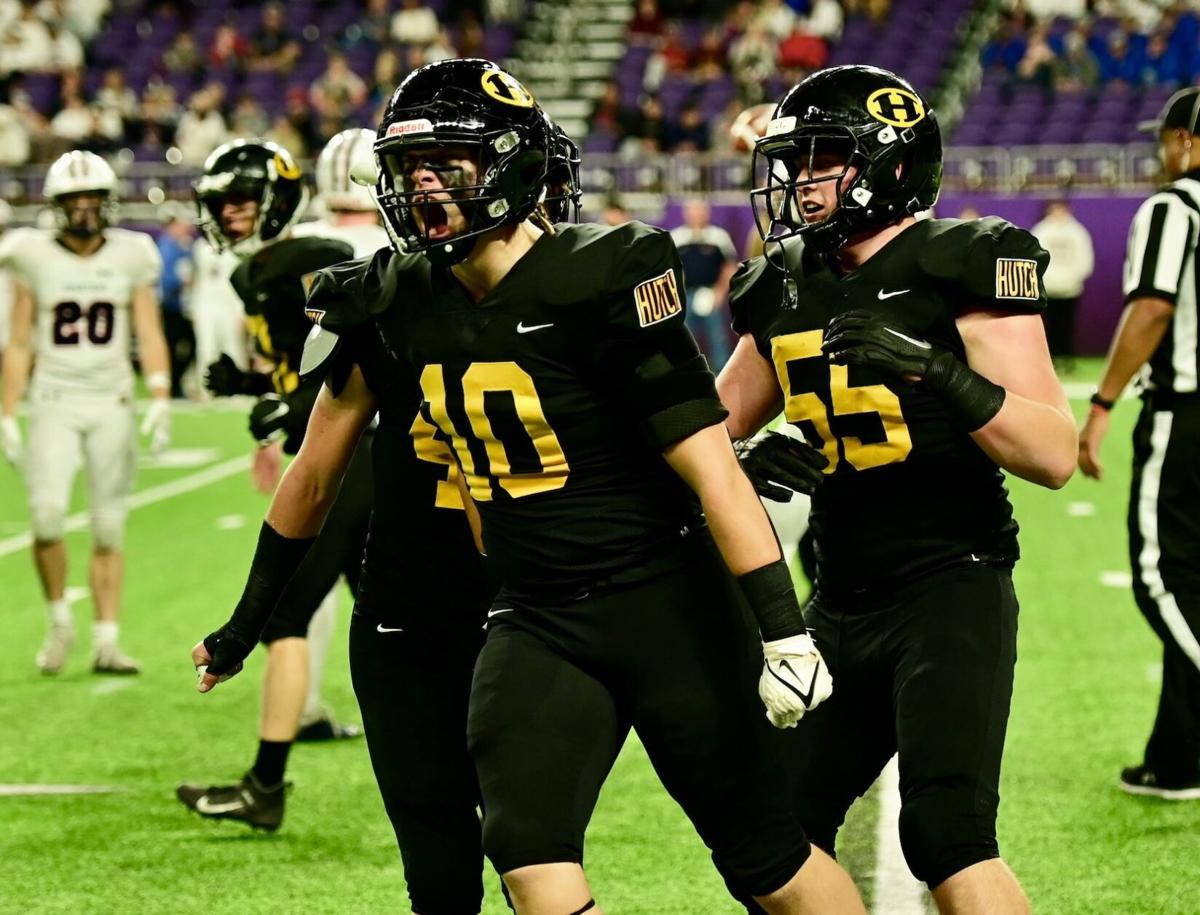 Hutchinson’s Kyle Schumann let out a roar after sacking Orono’s quarterback in the state semifinal Friday. 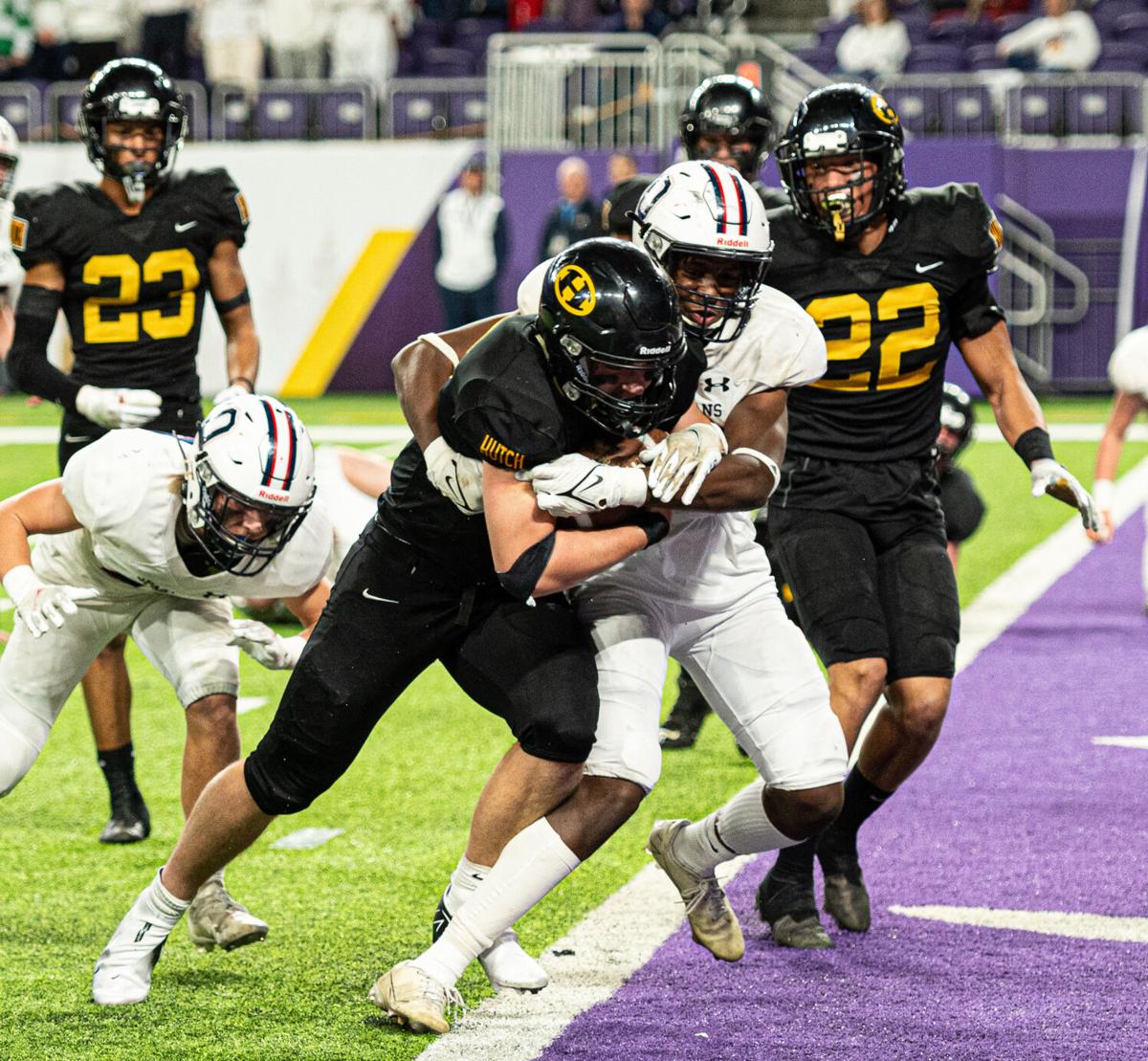 Sam Rensch hauls in a pass from quarterback Colin Nagel for a 29-yard touchdown Friday at U.S. Bank Stadium. The Tigers plowed through Orono for a 36-6 win to move on to the state finals Friday.

Hutchinson’s Kyle Schumann let out a roar after sacking Orono’s quarterback in the state semifinal Friday.

One team had 15 first downs, 192 rushing yards and a passing touchdown in the first half. The other team failed to move the chains, totaling just 13 yards of total offense in 24 minutes of play.

For Hutchinson, it was another dominating performance in the program’s 24th state tournament appearance. A week after shutting out Simley in the Class AAAA semifinals, 40-0, the Tigers put the first 30 points on the board, winning 36-6 over Orono.

Hutchinson (11-1) will meet Kasson-Mantorville in the Prep Bowl at 4 p.m. on Friday, Nov. 26, at U.S. Bank Stadium in Minneapolis.

Whether it was Levi Teetzel, AJ Ladwig, Alex Elliott or Mitchell Piehl, when the ball was handed off by quarterback Colin Nagel, positive yards were gained. Most drives were four-or-five yards at a time, long sustained possessions. The final scoring drive went 15 plays for 79 yards and elapsed nine minutes, 43 seconds off the clock.

Hutchinson dominated at the point of attack to put it politely.

“It stems from our offensive line coach (Dave Kucera). He’s such an inspiration and he motivates us so much. He brings us together as brothers,” Einck said.

Elliott from nine yards, Teetzel from four yards and Ladwig on a one-yard plunge produced a 30-0 advantage for the Tigers. Mixed in the scoring summary was a 29-yard completion — yes, a pass — from Nagel to Rensch for the team’s second score. A throw that landed softly into the hands of the wide open receiver behind the Orono defense.

“Coming back, (Colin) and I have always had an awesome connection. So when coach said (the play), I had some butterflies floating around,” Rensch said. “I was a little surprised, but Colin and I said let’s do it. We got together and made it happen.”

Nagel did not attempt a pass in the state quarterfinal win and entered the semifinal contest with two throwing touchdowns.

Orono, which started the season with a 1-6 record, winning five straight games by a combined 15 points, including three consecutive 1-point victories, was unable to establish any momentum offensively in the first half.

Down 22 points late in the second quarter, Orono elected to go for it on fourth down in their own territory. That’s when Alex Elliott knocked down a pass attempt, two Tiger defenders blanketing the lone receiving option.

A dominating 24-minute first half for the Hutchinson defense as well.

“Teams like (Orono) can be dangerous. When they start believing,” Hutchinson coach Andy Rostberg said. “Usually what ousts you, getting down to the final four, is doubt. When you’re doubting yourself, your teammates, or your team. When that creeps in, that’s usually what does you in. Believing is what allows you to keep playing, and I know these kids whole-heartedly believe in what they’re doing.”

Orono did score on its first possession of the second half capped by a 19-yard run from Aidan Mueller, who had more than 1,700 rushing yards on the season.

For the game, the Spartans were held to 49 yards on the ground and 102 yards total. Orono had just six first downs to 24 for the Tigers.

Ladwig led Hutchinson with 21 rushes for 138 yards with Elliott and Teetzel adding 14 and 17 carries for 82 and 80 yards, respectively. The Tigers ran the ball 59 times without a penalty infraction.

“You know the town’s pretty excited. I can feel it with my phone in my back pocket,” Rostberg said.

“We always talk about tradition. It was a big part of me growing up as a kid,” Einck said. “I was inspired by the older kids, playing flag football. It’s such a big part of our city. Everyone comes together and it’s like a huge family.”

“That’s the dream. One town. One team. When we win, we say ‘we,’” Rostberg said. “Everybody wins. When someone calls and asks how the Tigers did, we don’t say ‘they won,’ we say ‘we won.’ The town is part of that. It’s fun to share it with as many people as you can.”

Hutchinson’s final opponent in its quest for its first state title since 2013 is Kasson-Mantorville, a program the Tigers last met up with in 2012 in a 23-21 state quarterfinal win at Chanhassen High School.

The KoMets are 9-3 with losses to Class AAAAA Mankato East and Owatonna, and Stewartville. Kasson-Mantorville’s semifinal opponent, Becker, was the lone team to beat Hutchinson this season.

“These guys have one more chapter in the book they’d like to write for 2021,” Rostberg said. “We’re excited because now we get to hang out for one more week. We know when the last practice is, and that doesn’t happen very often. We have four more practices and one last game.”

Hutchinson, state champions in 1983 and 1984 with Rostberg at quarterback, his father, Grady, the coach, will play in its seventh championship game.

The Tigers won back-to-back titles in 2012 and 2013. Aaron Elliott was there, watching his oldest brother, Adam, bring home the hardware.

“I remember coming to the Metrodome, watching, and I just knew we wanted to be there,” Aaron said. “We knew that we could. We were pretty talented. It’s a dream come true to finally be here.”