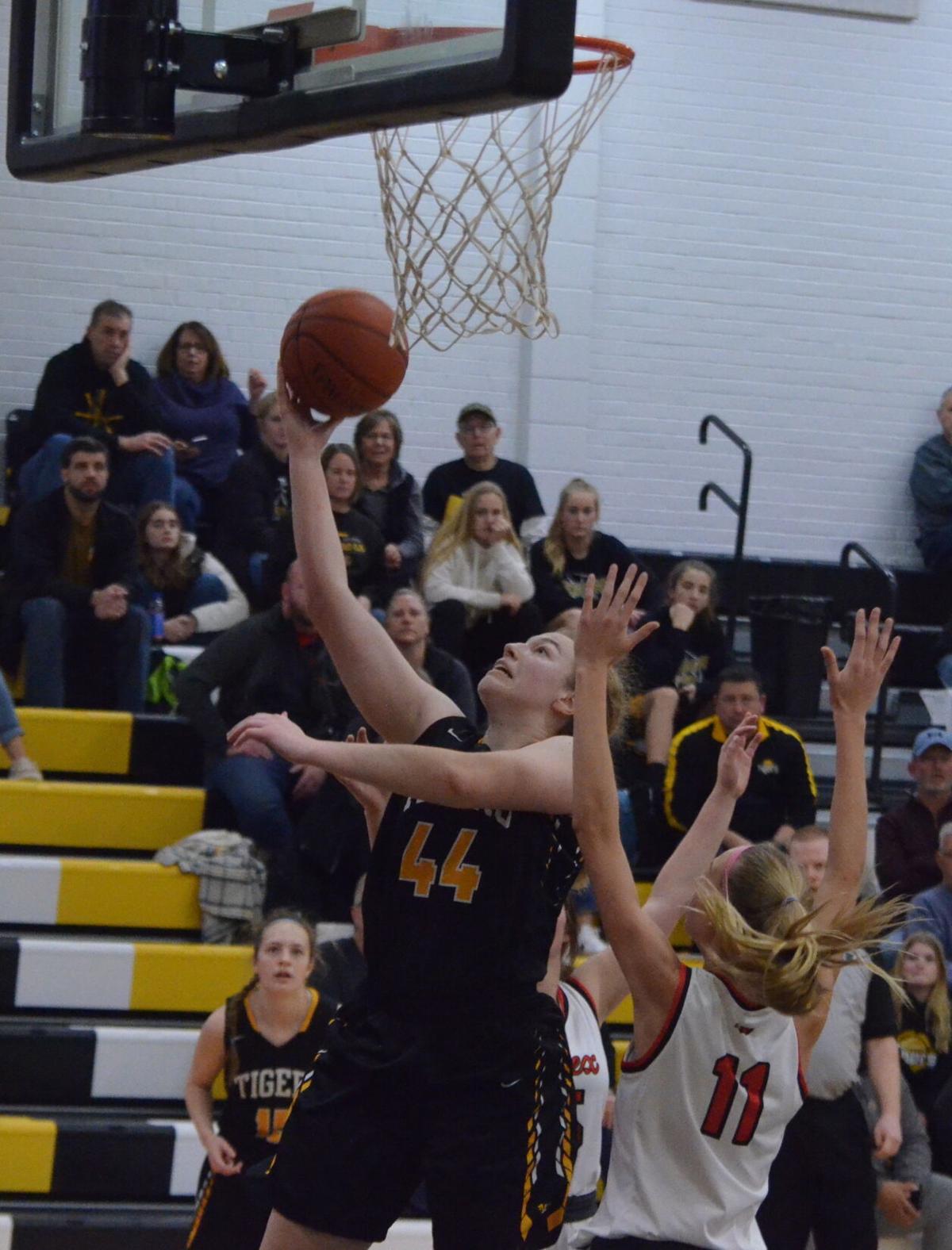 Hutchinson post Brynn Beffert goes up for a shot against Alexandria during Saturday’s game. She posted impressive numbers, scoring 20 points and 22 rebounds against the Cardinals. That was following a 16-for-16 night against Glencoe-Silver Lake Jan. 6, which ranks second in single-game field goal percentage in the country. 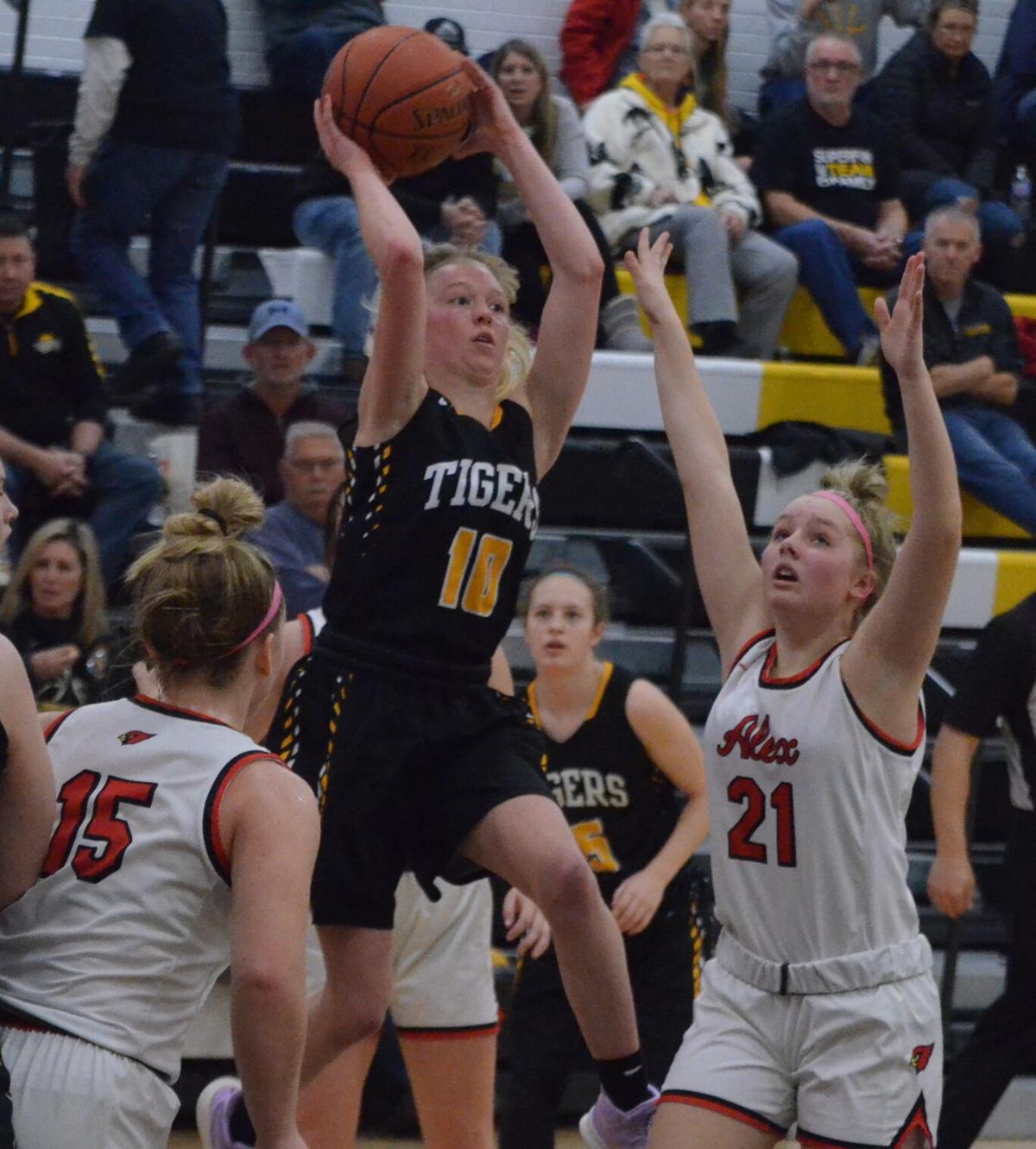 Alyssa Stamer went airborne as she looked for an outlet to pass to during Hutchinson’s narrow victory over Alexandria Saturday. Stamer scored 15 points in the win and led the team with four assists.

Hutchinson post Brynn Beffert goes up for a shot against Alexandria during Saturday’s game. She posted impressive numbers, scoring 20 points and 22 rebounds against the Cardinals. That was following a 16-for-16 night against Glencoe-Silver Lake Jan. 6, which ranks second in single-game field goal percentage in the country.

Alyssa Stamer went airborne as she looked for an outlet to pass to during Hutchinson’s narrow victory over Alexandria Saturday. Stamer scored 15 points in the win and led the team with four assists.

Halfway through the regular season, players on Hutchinson’s girls basketball team are still working to figure out who they are. The good news is that they’ve done pretty well while figuring things out, playing to an 8-4 record through this past weekend.

“Our top three players with Savannah (Schlueter), Brynn (Beffert) and Alyssa (Stamer) have a lot of experience, the rest of the team doesn’t,” head coach Tim Ellefson said about the Tigers. “We’ve been able to give some of those kids some experience — some of it good, some of it not so good. But we’re starting to learn what they can do right now, and what they need to work on to get better. We’re just trying to make everybody else on our team better to fit a role for them to play for us. We need someone else to hit a 3-pointer, we need someone else to be a lockdown defender, we need someone else to rebound. It’s not big things, we need a lot of little things done, and that’s our work in progress to get better for the end of the season.”

On Saturday the Tigers discovered something else about themselves — they don’t give up easily.

Hutchinson hosted Alexandria that day, and after playing from behind for 37 minutes, the Tigers came back and took the lead in the final minute for a 60-58 win.

“We never put our heads down,” Schlueter said after the game. “We always think we can win, even if we’re down by 20, we can come back from that.”

The Tigers were never down by 20, but Alexandria didn’t make it easy on them. It was a rollercoaster game as Hutch would fall behind by six or seven points, then close to within a basket before falling behind again.

Hutchinson went into halftime trailing by only two points, but immediately fell behind again at the start of the second half, trailing by as much as 10 points with about a quarter of the game left.

“They gave us some issues because they have so many guards and they can substitute in, they’re all clones of themselves basically,” Ellefson said. “They put a lot of pressure on our defense attacking with their dribble and quickness.”

When the Tigers were able to go on their runs and close the gap, it was because of adjustments they made on defense to keep the Cardinals from getting open shots or driving to the basket.

“Our defense in the second half picked up,” Beffert said. “We were getting in front of our girls, getting good help there and stopping them. We got our hands on a lot of balls and got the rebounds, so that really helped us.”

After falling behind by double digits, the Tigers began making their move. Slowly but surely, Hutchinson closed the 10-point gap, and with 1:06 on the clock tied the game up for the first time at 54.

The Tigers then took a two-point lead, and although they never relinquished it, they had to work to keep it. Stamer, who usually handles the ball, fouled out with 32 seconds left, and the rest of the game was played at the free-throw line.

“We won that last minute without her in there, and that’s a testament to the kids that were out there playing and just getting it done,” Ellefson said.

Hutch’s big break came with a one-point lead and Schlueter at the line. Shooting two, she drained her first one but missed the second. However, with most of Hutch’s players at half court to prevent a fast break, Alexandria didn’t move to quickly get the rebound. That allowed Schlueter to get off the line and rebound her own missed shot. She was quickly fouled again and made the next two free throws.

“I didn’t really miss on purpose, but I got the rebound on purpose,” Schlueter said with a laugh.

“Savannah doesn’t give up until the last second, and that really showed it,” Beffert said. “That’s a really big play for us.”

The four-point lead was crucial as Alexandria made one last 3-pointer before the Tigers got the ball back and finished the game at the free-throw line.

While there were lots of small efforts that helped lead to the win, there were some big ones too, like Schluter’s 20 points, Stamer’s 15 points, and Beffert’s 20 points and 22 rebounds.

Beffert also achieved a memorable accomplishment Jan. 6 when she went 16-for-16 against Glencoe-Silver Lake. Her field goal percentage and shots made rank second in the state and country, according to the National Federation of State High School Associations. The record is 17-for-17 from a Minnesota player in 1984.