The Hutchinson girls hockey team battled the odds to reach their first Class A state tournament in five years. Now that they’re back, the question is how far can they go?

The Tigers are set to take on the No. 3 seed, Cloquet-Esko-Carlton, at 1 p.m. Wednesday in the first round at the Xcel Energy Center in St. Paul. The Lumberjacks went 22-3 in the regular season and have won 24 of their last 25 games, including playoffs.

CEC is going into the tournament hot, but so are the Tigers. Hutch’s players know it's going to be tough, and they're plan is to play like it’s their last game. But no question, the Tigers are hunting for some hardware. 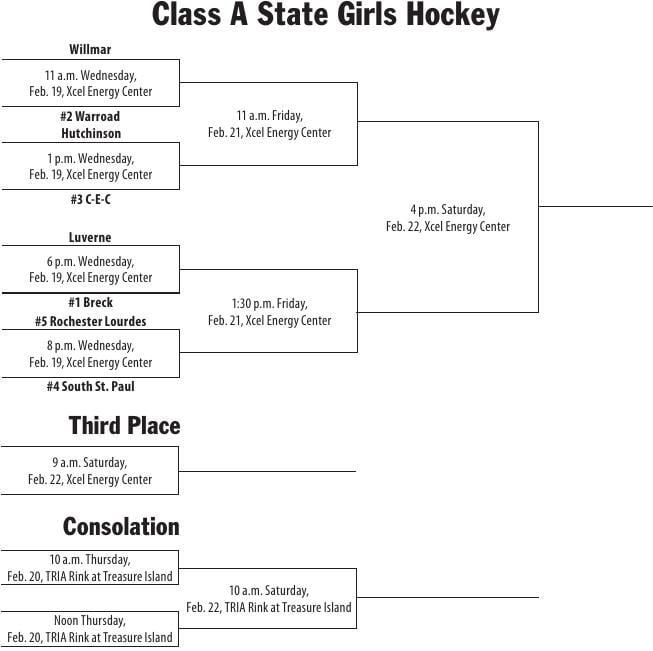 “We definitely want to win,” senior Sabrina Tracy said. “But if we lose, we lose as a team. We're not going to put each other down or hang our heads or anything, because we made it state and that's awesome.”

During the season, he Tigers and Lumberjacks had two overlap teams: Orono and Sartell/Sauk Rapids. CEC beat both of those teams, while Hutch went just 1-2 against those opponents. It's not saying much about who CEC beat as they only have lost thrice this year and two of them came in the first three games. Their other loss was to powerhouse Proctor/Hermantown, a team they defeated in the section final to get here. They are strong, but the girls believe that once they get out on the ice, it's anyone's game.

“Our team talks and we're like 'we can stick with them,'” Tracy said. “We can do it as long as we have each other. I feel like we can take it to anybody.”

This will be the first time that most of the team will be skating on the Xcel Energy Center ice. It's the same dimensions as every other rink, but the gravitas of being on the big stage just makes it different. But they don't care, they want to get out on the ice and show the top teams in the state what they are made of.

“They're hungry to get after this,” head coach Marc Telecky said. “They know they have a good opportunity in front of them.”

But Telecky doesn't want them to lose their edge as the underdog.

“I love the role as the underdog,” Telecky said. “I would love a shot at the top-two (Breck and Warroad). But Cloquet is a formidable opponent and we have to do things the right way. If we come with the energy and play as a team, hopefully we can move on.”

No matter what happens, this is a memory the girls will have forever. Many girls on the team got it under-the-wire as there are five seniors on the team. The girls have gone through countless battles over the years, on Wednesday, it's time for one last hurrah before closing the book on their careers.

“We're definitely trying to go out with a bang,” Tracy said.

If you want to watch the Tigers but can’t make it down to the Xcel Energy Center, the game will be streamed live at prepspotlight.tv/mshsl.