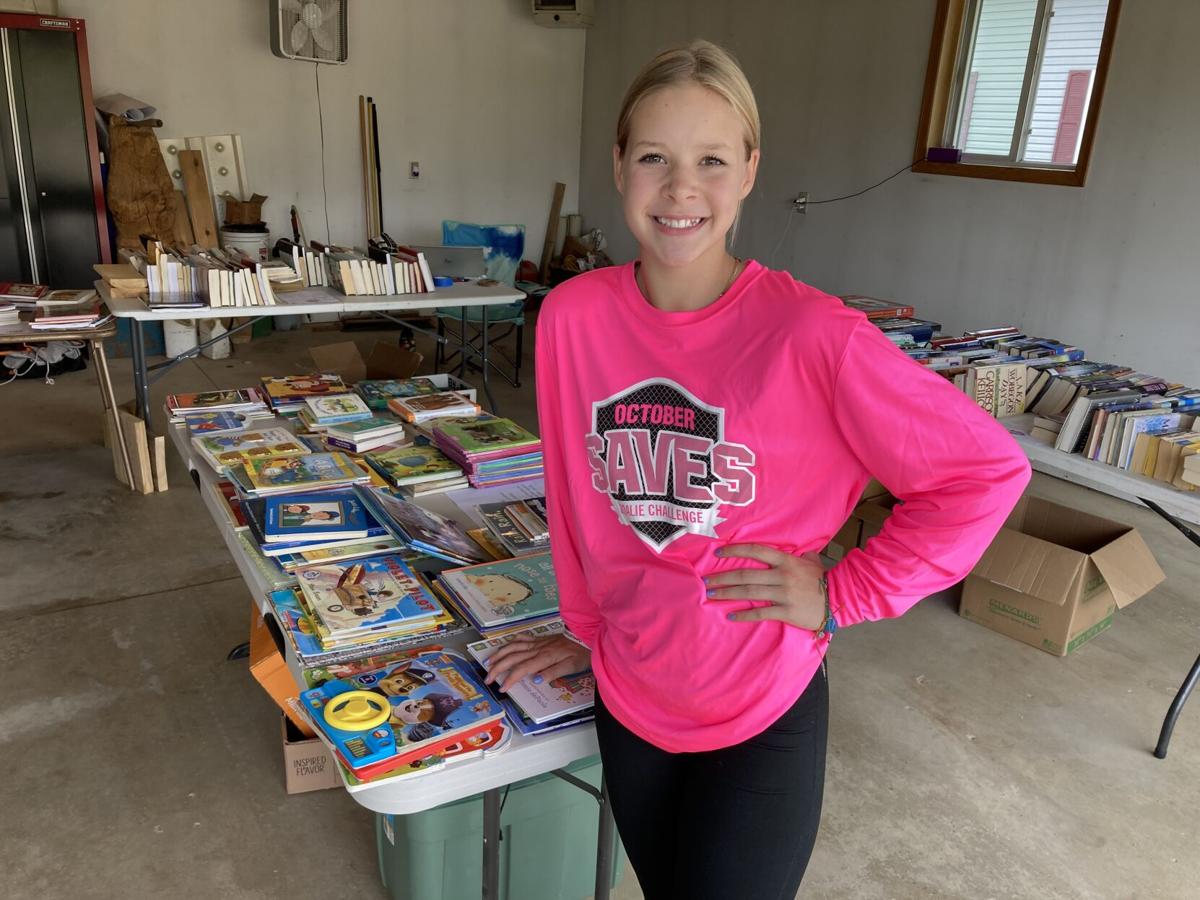 Kaiden Fitterer, 14, of Hutchinson, had a used book sale earlier this month as part of her efforts to raise money for the October Saves Goalie Challenge, a nationwide competition for goalies raising money for cancer research. She also plans to hold a pumpkin carving event Oct. 30. 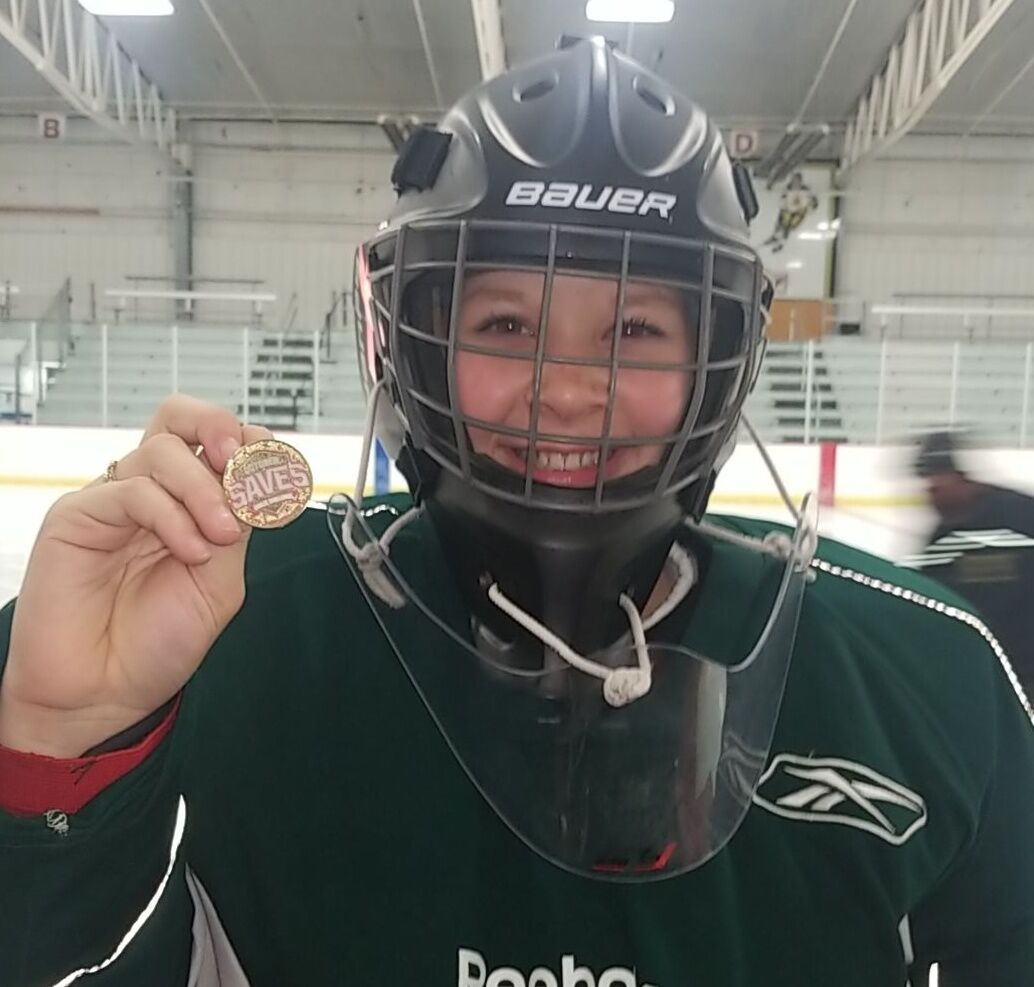 Hutchinson goalie Kaiden Fitterer shows off the pin she received for being the top Minnesota fundraiser in the October Saves Goalie Challenge last year. The nationwide competition raises money for cancer research.

Kaiden Fitterer, 14, of Hutchinson, had a used book sale earlier this month as part of her efforts to raise money for the October Saves Goalie Challenge, a nationwide competition for goalies raising money for cancer research. She also plans to hold a pumpkin carving event Oct. 30.

Hutchinson goalie Kaiden Fitterer shows off the pin she received for being the top Minnesota fundraiser in the October Saves Goalie Challenge last year. The nationwide competition raises money for cancer research.

For as long as 14-year-old Kaiden Fitterer can remember, she and her family have participated in Relay for Life of McLeod County. Caring for others with cancer has been instilled in her by her mother, Jamie Sorgatz, who lost an 8-year-old cousin and her grandmother to cancer when she was young.

“It’s just always been something that we’ve done,” Sorgatz said of Relay for Life. “I have pictures of them (Kaiden and her sisters) being itty bitty at Relay for Life here in town.”

For almost as long, Fitterer has loved playing hockey, starting when she was about 5 years old.

All grown up now and a goalie for the Hutchinson girls hockey team, Fitterer has found a new way to combine two of her favorite passions in life: stopping pucks and raising money for cancer research. It’s called the October Saves Goalie Challenge.

Fitterer was introduced to the competition by her mother.

It’s simple. Goalies around the country compete to see who can raise the most money for cancer reaserch in October. Players register online at octobersaves.org, and a leaderboard shows them where they stand compared to other goalies around the U.S. and in their state.

Fitterer is competing this year, but it isn’t her first time. Last year she was the top fundraiser in all of Minnesota, collecting $1,500 in donations. The money benefits cancer research facilities and services such as the Inova Schar Cancer Institute and Inova Life with Cancer Center, Children’s Hospital of Philadelphia and Eastern Ohio, the Dana-Farber Cancer Institute and more.

“Last year I wasn’t really going for a No. 1 name or anything like that. I just wanted to do it just to test it out and see how it was,” she said. “When I came out No. 1, it was kind of shocking. I just expected to be in the middle.”

Fitterer raised the money last year with donations from friends and family members, but she has bigger plans this for this year. She want’s to raise $2,500 and be No. 1 in Minnesota again.

“That’s something I want to keep,” she said.

To achieve her goals, the family came up with the idea of hosting several fundraising events rather than just asking for donations. She’s already off to a good start. Last year during the holiday season, while many people were home during COVID, she and her family made and sold hot chocolate bombs, artisanal confections you drop into hot milk or water that melt into hot chocolate.

“All of the holiday season last year we were making hot chocolate bombs that raised a ton of money,” Fitterer said. “It was a lot of work.”

The bombs were the bomb and helped raise hundreds of dollars, but the ideas didn’t stop there. Earlier this month Fitterer raised another $420 with a used book sale. And on Oct. 30 she’s hosting a pumpkin carving event called “Carve out Cancer” at a farmhouse outside Glencoe. The cost is $8 and includes cookies, hot chocolate, apple cider, pumpkins and carving materials. You can go online to tinyurl.com/34szva2h to register.

The deadline for all donations to be entered into the October Saves database is the end of the month. As of Monday morning Fitterer had $236 and was ranked third in Minnesota and 254th across the U.S. But she still had two weeks to go before all the funds had to be entered.

If you want to help Fitterer’s cause but can’t make it out to the pumpkin carving event Oct. 30, she said other ways you can help is “Telling other people about it or other people who would like to pledge to it.”

You can also go online to tinyurl.com/a872b255 to make a pledge straight to Fitterer’s October Saves donation page. With a few dollars you can help people with cancer, and make Fitterer No. 1 in the state again.