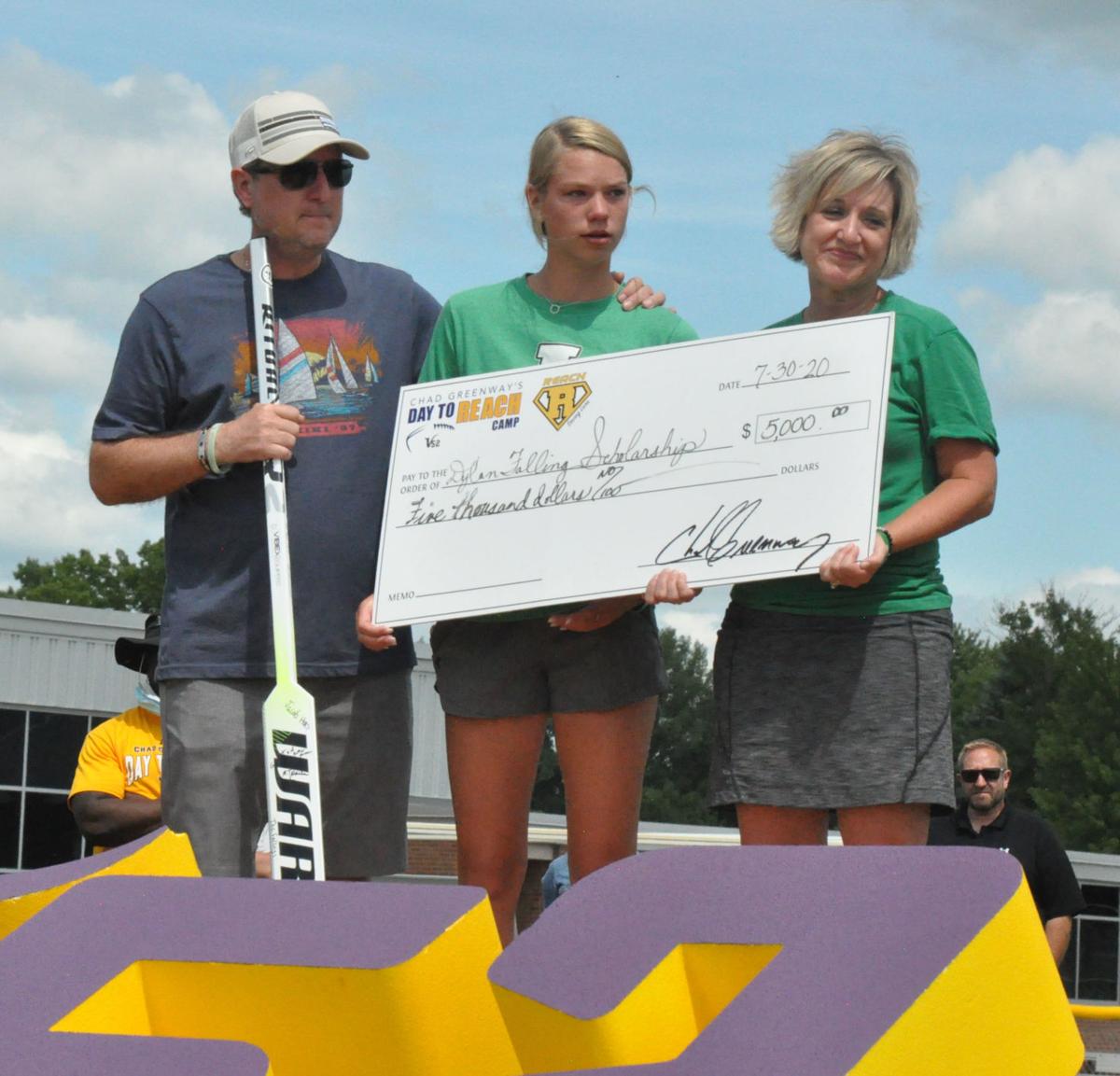 Dustin, Morgan and Michelle Falling of Litchfield accepted a $5,000 donation from the Chad Greenway Day to Reach Camp. The money will go toward a scholarship fund named in honor of Dylan Falling, who died in a June car crash. The family also received a signed goalie stick from all the players on the Hutchinson boys hockey team, as Dylan was a goalie with Litchfield/Dassel-Cokato. 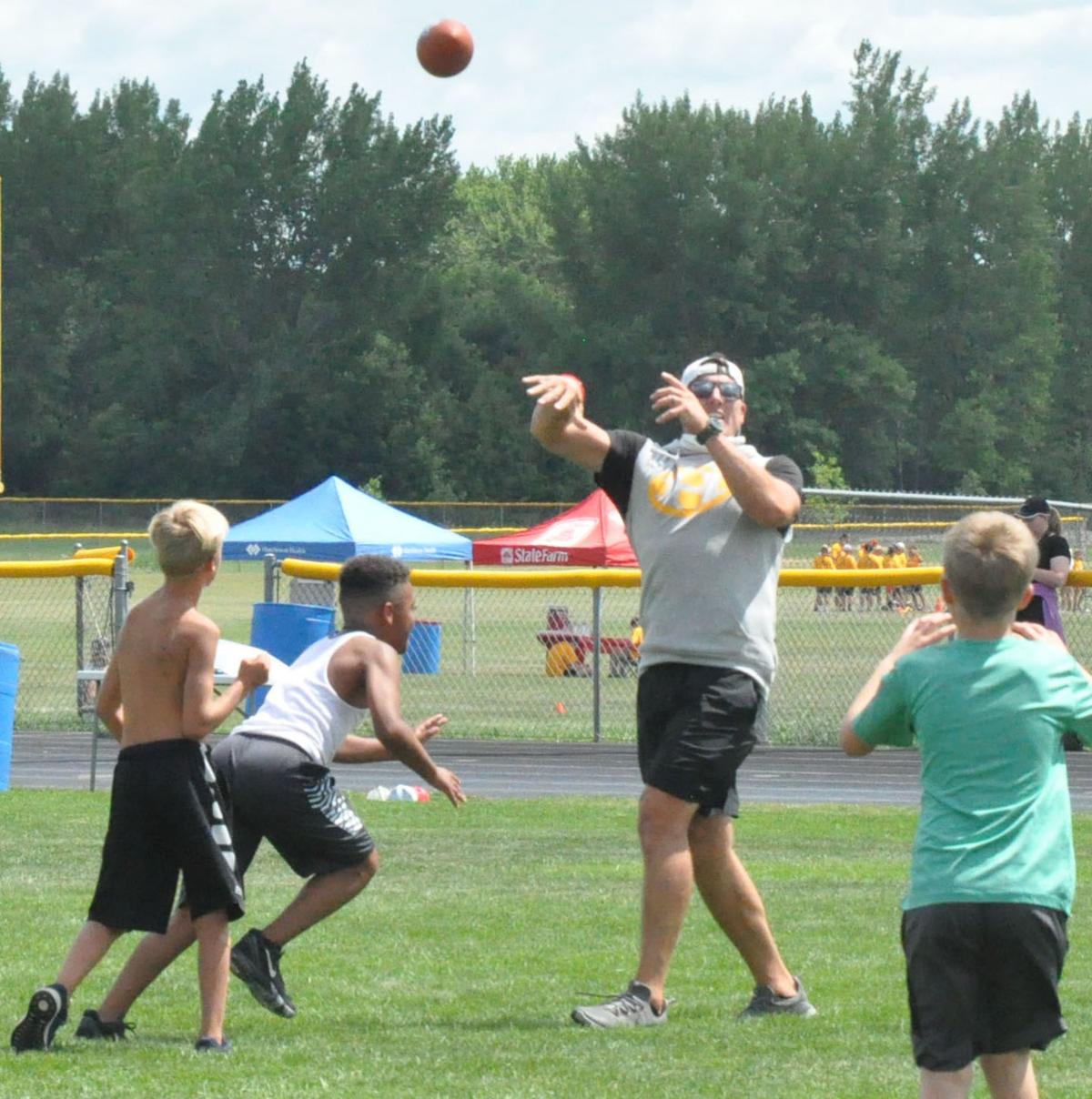 Former Minnesota Vikings player Chad Greenway lets a throw go before the pass rush could get to him during a game of touch football. Greenway was in Hutchinson last week as part of the annual football camp, which teaches young people skills for the game, as well as for life.

The 12th annual Chad Greenway Football Camp has held last Thursday here in Hutchinson at S.R. Knutson field, but this year it was different. In normal years, Chad Greenway and his partner in putting it together, Chad Harlander, had two days to try to hit their goals for the camp.

“In a normal year, we'd come back tomorrow and those relationships that we create on day one get to expand on day two,” former Minnesota Vikings linebacker Chad Greenway said. “Maybe you're getting to know somebody you didn't even know within your own community. That's really special, so it's harder to accomplish that, but I think we did as good of a job as we could by abiding by the rules.”

Harlander wasn't sure if there would even be a camp this year with COVID-19. He had parents calling and sending emails asking about the camp. Normally, there are around 500 kids that show up, but this year it was capped at 225. But Harlander was determined to have some sort of camp, no matter how different it might be.

“When I talked to Chad (Greenway), we wanted to push through this and to honor that theme we had this year and that was perseverance,” Harlander said.

It took a lot of people to say yes to Harlander to put the camp together. He even sent out a survey to parents asking them if they still wanted the camp, and if they felt comfortable with it.

“Every response that we got from our families in the survey is 100 percent, let's make this work, we're going to respect guidelines.” he said.

In keeping with the camp's theme of perseverance, and its goal of being more than just a football camp, showing campers how to make an impact in their communities and leading by example, a special ceremony was held at the end of the camp to honor a local family that has persevered through tragedy this summer.

Back in June, 16-year-old Dylan Falling of Litchfield died in car crash. On Thursday, Dylan's parents, Dustin and Michelle, and his sister, Morgan, accepted a $5,000 donation to the Dylan Falling Scholarship to help children attend the School of St. Philip in Litchfield, which Dylan attended.

Harlander said that as a parent seeing someone lose their child, he wanted to do anything he could to help the Falling family.

“It means the world,” Dustin Falling said about the scholarship. “We're not even from Hutchinson, and just to have people that we don't know, many we do, many we don't, but come support us and do things that they don't need to do. But to step up and do things like that, you know, not only for the scholarship, but we're also starting the One Foundation for Dylan's number as a goaltender. We're going to continue helping kids that need help.”

As for the future of the camp, while nothing was set in stone, Harlander said it is his hope that after 12 years of being part of the community, the camp will continue in 2021.