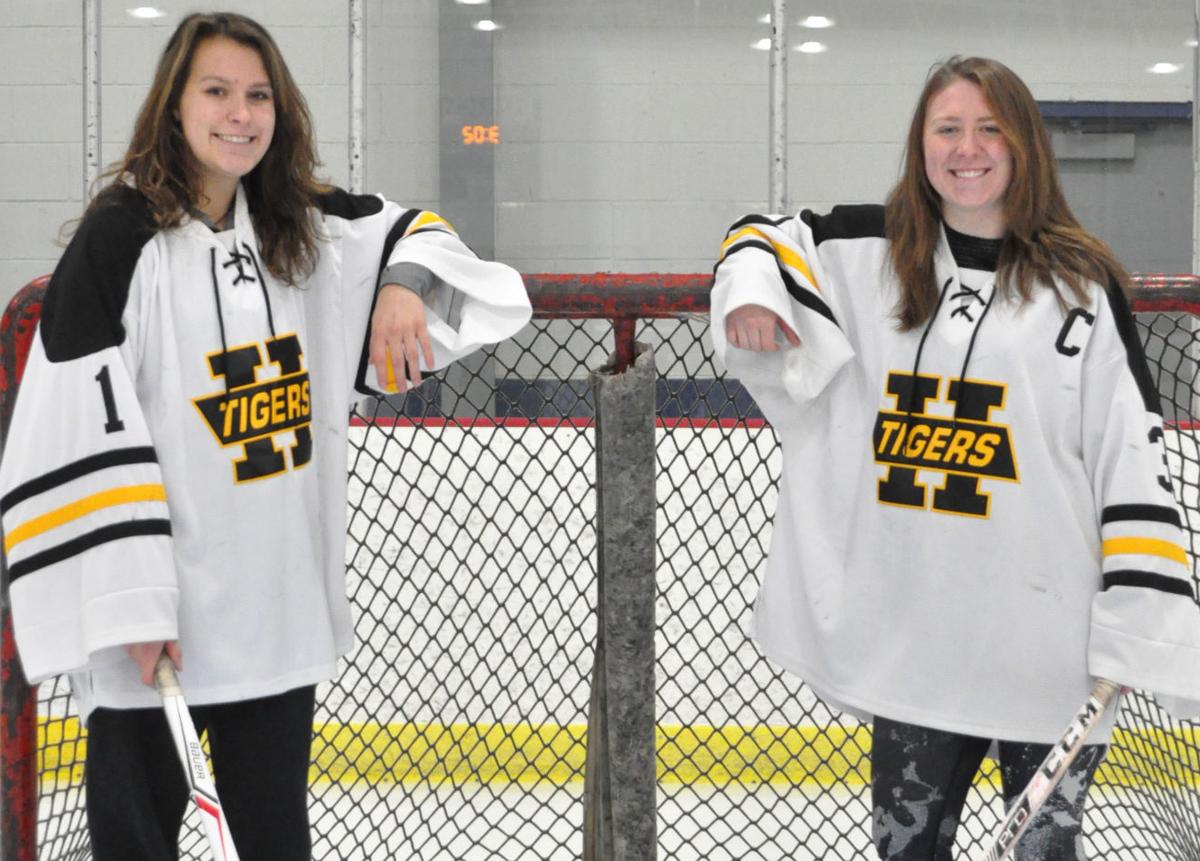 Hutchinson has been rotating between two standout senior goalies so far this year: Ellie Lenarz, left, and Emma Barrick-Benson. 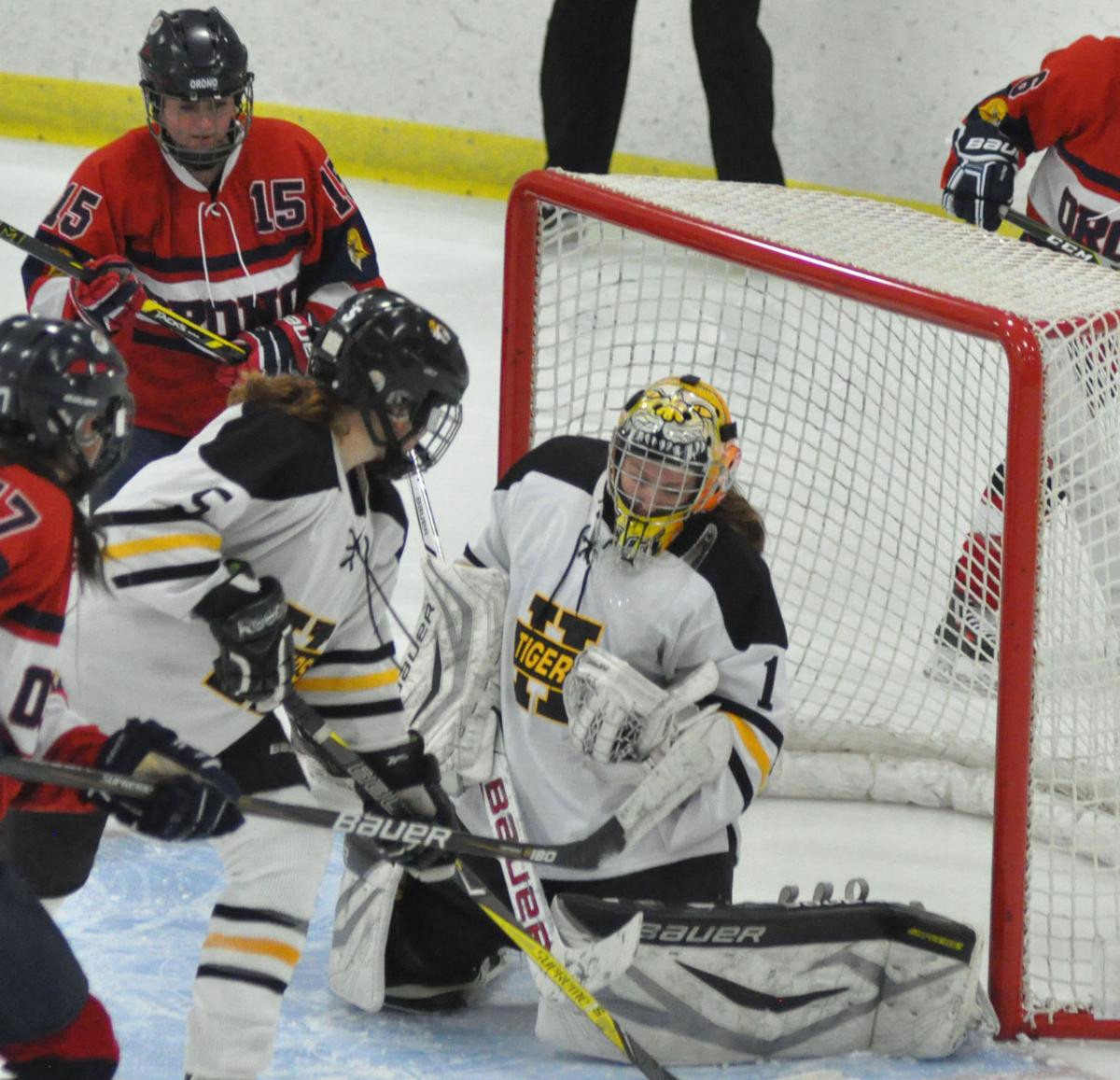 Senior Ellie Lenarz made a glove save early in the first period against Wright County Conference foe Orono on Saturday. 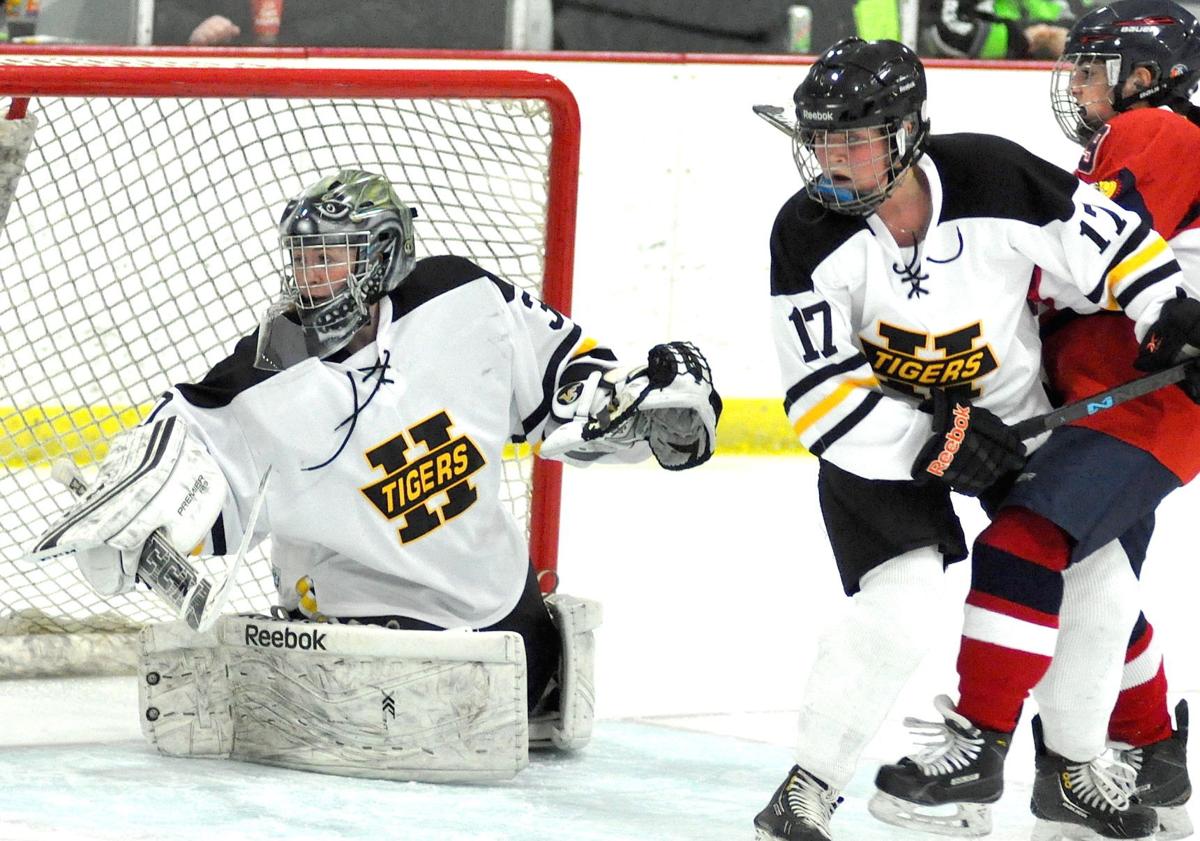 Hutchinson goalie Emma Barrick-Benson deflected a shot against Orono last year, one of her 22 saves in the Tiger victory.

Hutchinson has been rotating between two standout senior goalies so far this year: Ellie Lenarz, left, and Emma Barrick-Benson.

Senior Ellie Lenarz made a glove save early in the first period against Wright County Conference foe Orono on Saturday.

Hutchinson goalie Emma Barrick-Benson deflected a shot against Orono last year, one of her 22 saves in the Tiger victory.

Playing goalie can be lonely at times. You can be left with just your thoughts as the puck is in the offensive zone, or you can be on an island covering an opponent’s breakaway, facing a charging forward with a full head of steam.

These days the net has become a little less lonely, perhaps even crowded, for the Hutchinson girls hockey team.

Seniors Ellie Lenarz and Emma “Squeak” Barrick-Benson both came into this season with previous starting varsity experience, and have split goalie duties for the Tigers so far this season. New head coach Hannah Impola wanted to see what she had in her veteran netminders, and so far she’s liked what she has seen.

“At the start of the year, we want to give them both a shot,” she said. “We kind of started rotating, and I kind of feel like its been working. And they’ve both done a great job, so we’re gonna keep doing that.”

“I really enjoy alternating games. I feel like we can just tag-team the season then and it helps us stay consistent in net,” Lenarz said. “And I think the team enjoys it, too. It helps us play as a team.”

Thrust into the starting role due to injuries as a freshman, Lenarz went 10-7-1 in the regular season with a .905 save percentage. She and the Tigers went all the way to the state tournament during that 2014-15 season.

She, Barrick-Benson and now-graduated goalie Quin McCormick split duties the next season. Last year, Lenarz posted a 6-0-0 record and a 1.95 goals-allowed average.

Barrick-Benson also had a solid season. She went 11-6-0, had a 1.57 goals-allowed average and a .943 save percentage. Thus, the Tigers carried two established and experienced goaltenders into this season.

While competing for ice time, Impola believes it has helped bring the best out of the duo.

“What I like about them both is that they’re really pushing each other, because they both want to be the starter,” she said. “And so it’s a unique relationship where they challenge each other, which is making each other better, and at the same time making themselves better and the whole team better.”

Entering Thursday’s game against Delano/Rockford, both goalies have save percentages over .925, and the team is reaping the benefits of their steady play. With a 4-1 win over Minnesota River on Tuesday, Hutch improved its record to 5-3-1.

“I think its great for our team, the competition for our team, of every player is competing for ice time. ‘Nothing’s ever set,’ I’m always telling the girls,” Impola said. “I think the goalies are really improving because they know, if they take it easy one day, they might’ve lost the spot.”

They also have differing styles of play, which can affect how an opponent might prepare against the Tigers.

“I think that I probably stay back in the net more, but I over-challenge more,” Barrick-Benson, a team captain, said. “She (Ellie) has a little bit more of a happy medium, I’d say.”

“Squeak is quick. She is quick laterally down low, and she can get into spots real quick, I think,” Impola said. “I think Ellie is steady. Like, you know what to expect from Ellie, you’re never going to be surprised.”

With the way the two have been playing, the goalie situation will remain in flux, at least in the short term.

“We’re taking it week by week for the most part. It’s not like you go into the day before a game and then find out,” Lenarz said. “It’s usually, like, on a Friday we’ll find out the next week’s (starters), type of system.”

One factor that plays into the starter is previous experience against the opponent. How a goalie performed previously against a team, either this year or other years, can affect whether it makes sense to put them in net when facing them again. This particularly affects games against Wright County Conference opponents, which is the portion of the schedule Hutch is just starting.

“Now that we’re getting to the teams we’re going to play more than once ... It might not go, like, Ellie next game,” Barrick-Benson said. “But if there’s two games next week we’ll both probably play one, depending on which team it is.”

The Tigers have two home games this week. The first is at 7:15 p.m. Tuesday against New Prague, and then 7 p.m. Friday against Dodge County. If the previous weeks have been any clue, it’s a safe bet we’ll see a different goalie in net for each game.

Regardless of who is the backstop, however, the Tigers are the benefactors of two veteran senior goalies playing in peak form.