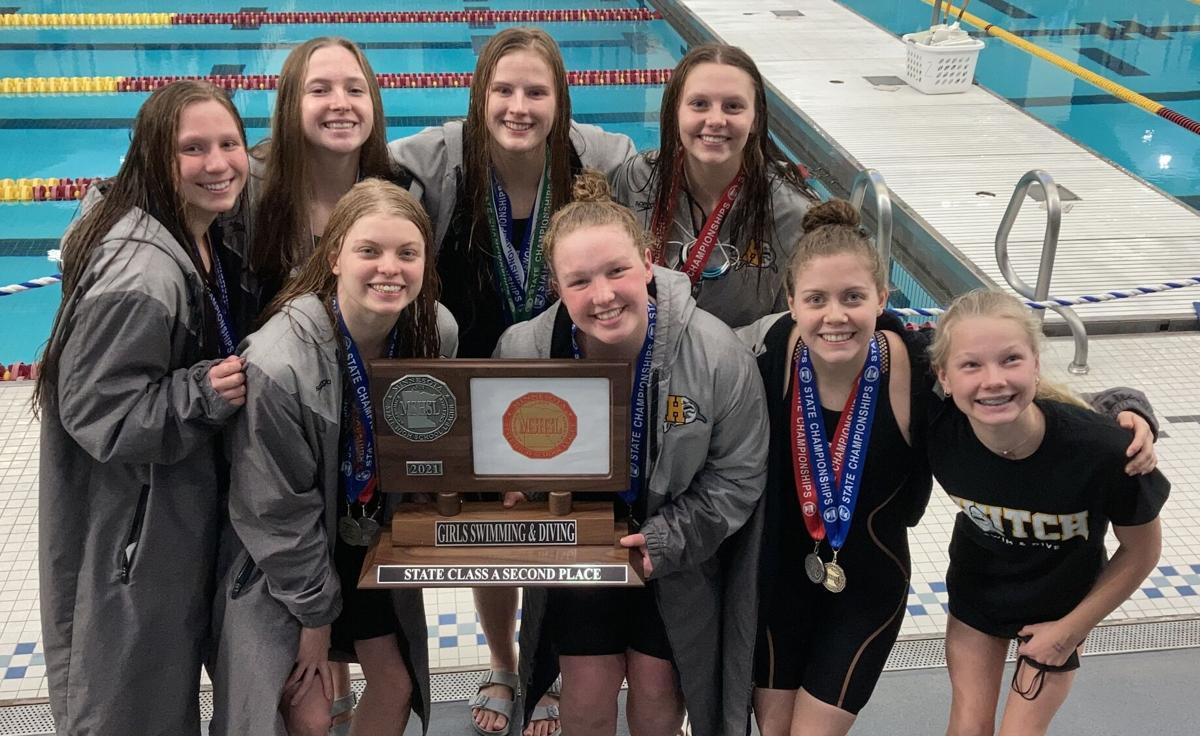 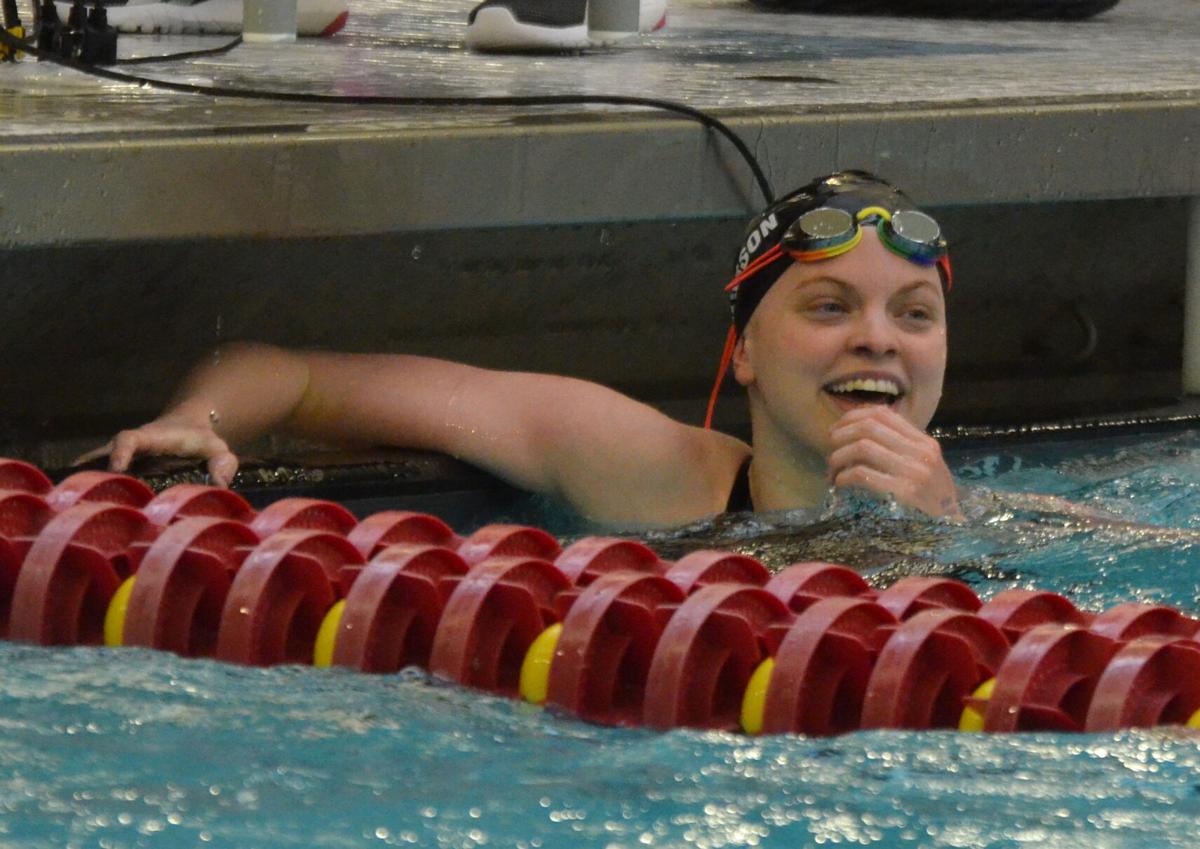 Grace Hanson couldn’t hide her excitement after winning the 50-yard freestyle state championship for a fourth consecutive time. Not only that, she set a new state and school record in the event. Hanson did the same thing in the 100-yard freestyle and finished her high school career with 14 state titles, the most in school history. 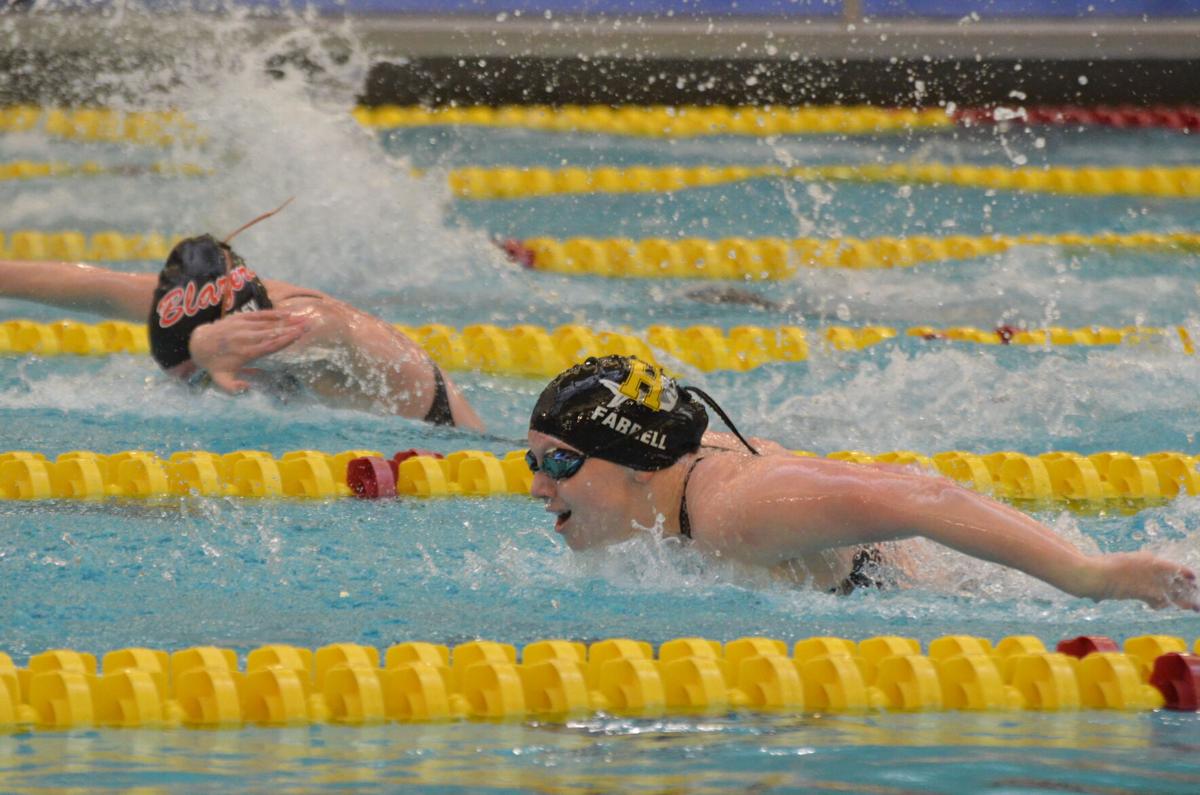 Hutchinson’s Hailey Farrell raced Visitation’s Anna Farley in the 200 individual medley finals. Farrell ended up finishing second overall, behind Farley, by less than half a second. 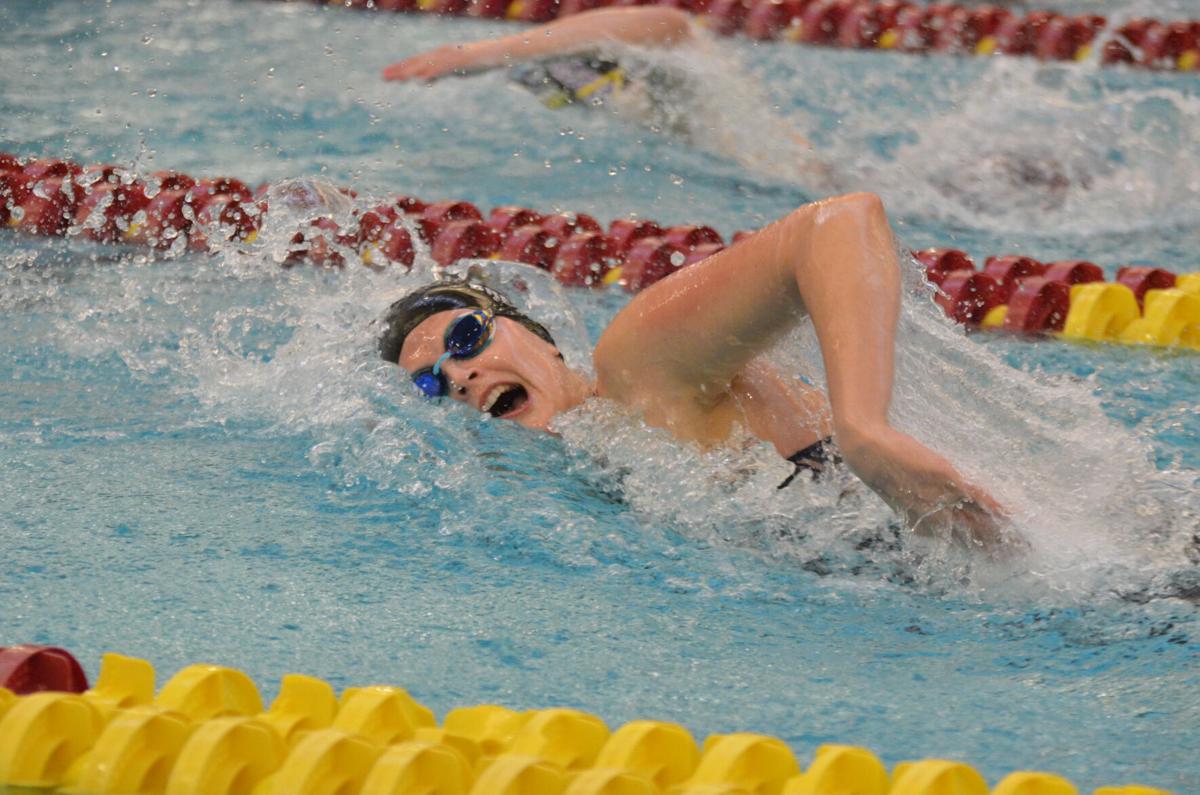 Senior Kasidy Brecht swims hard to a fifth-place finish in the 100-yard freestyle. She also took third in the backstroke and was part of championship relay teams in the 200 medley relay and 400 freestyle relay. 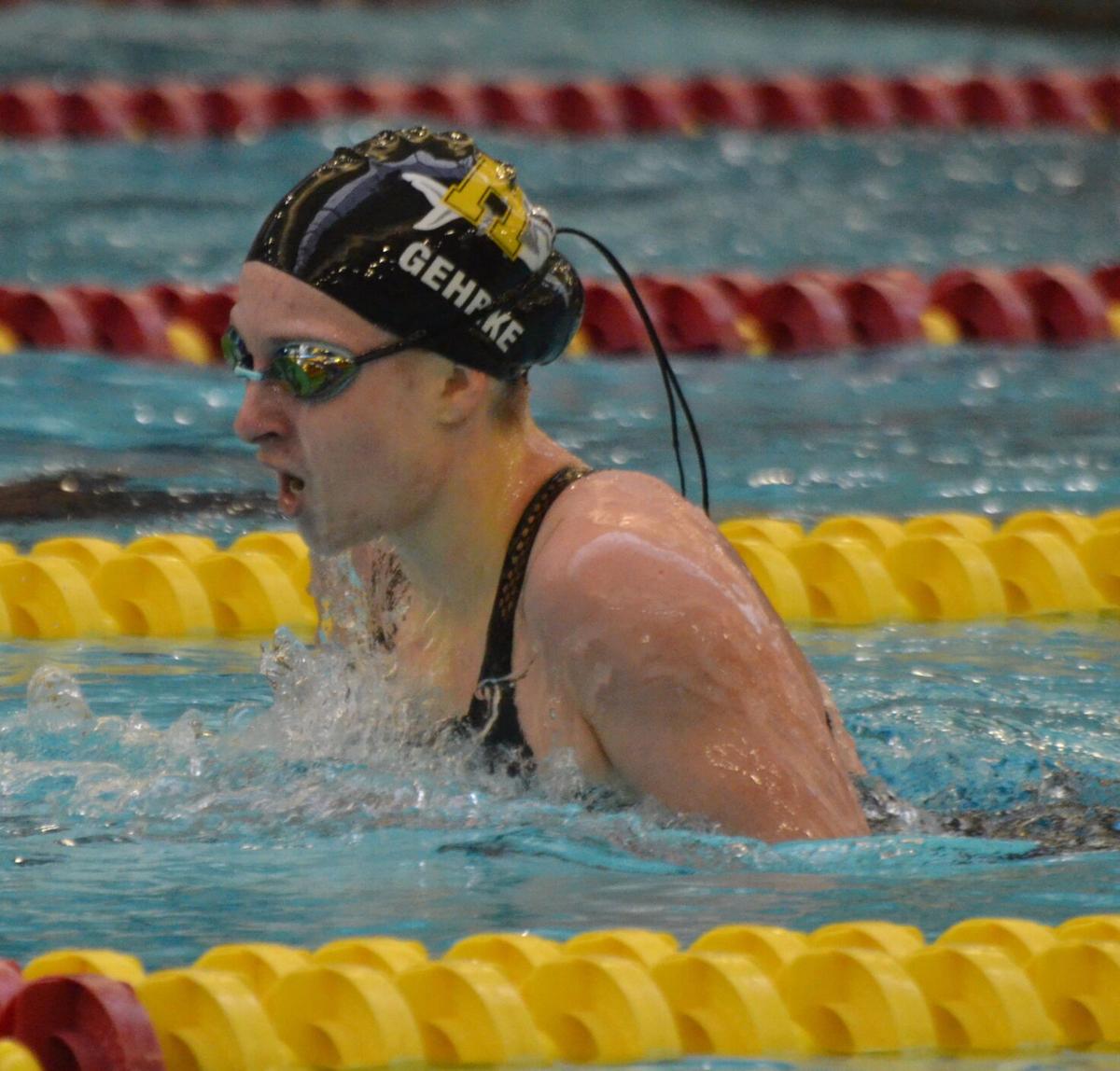 Madilyn Gehrke earned her first state championship with the 200-yard medley relay team, but she also took third place on her own in the 100 breaststoke. 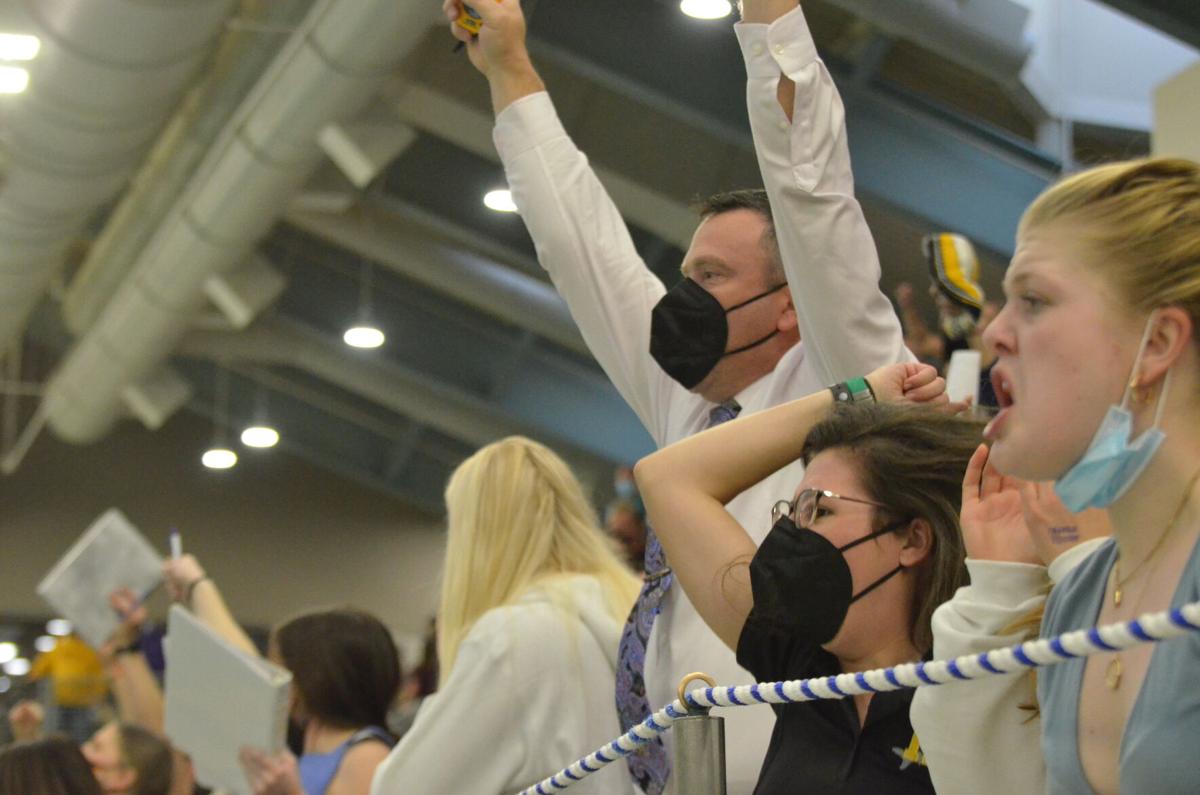 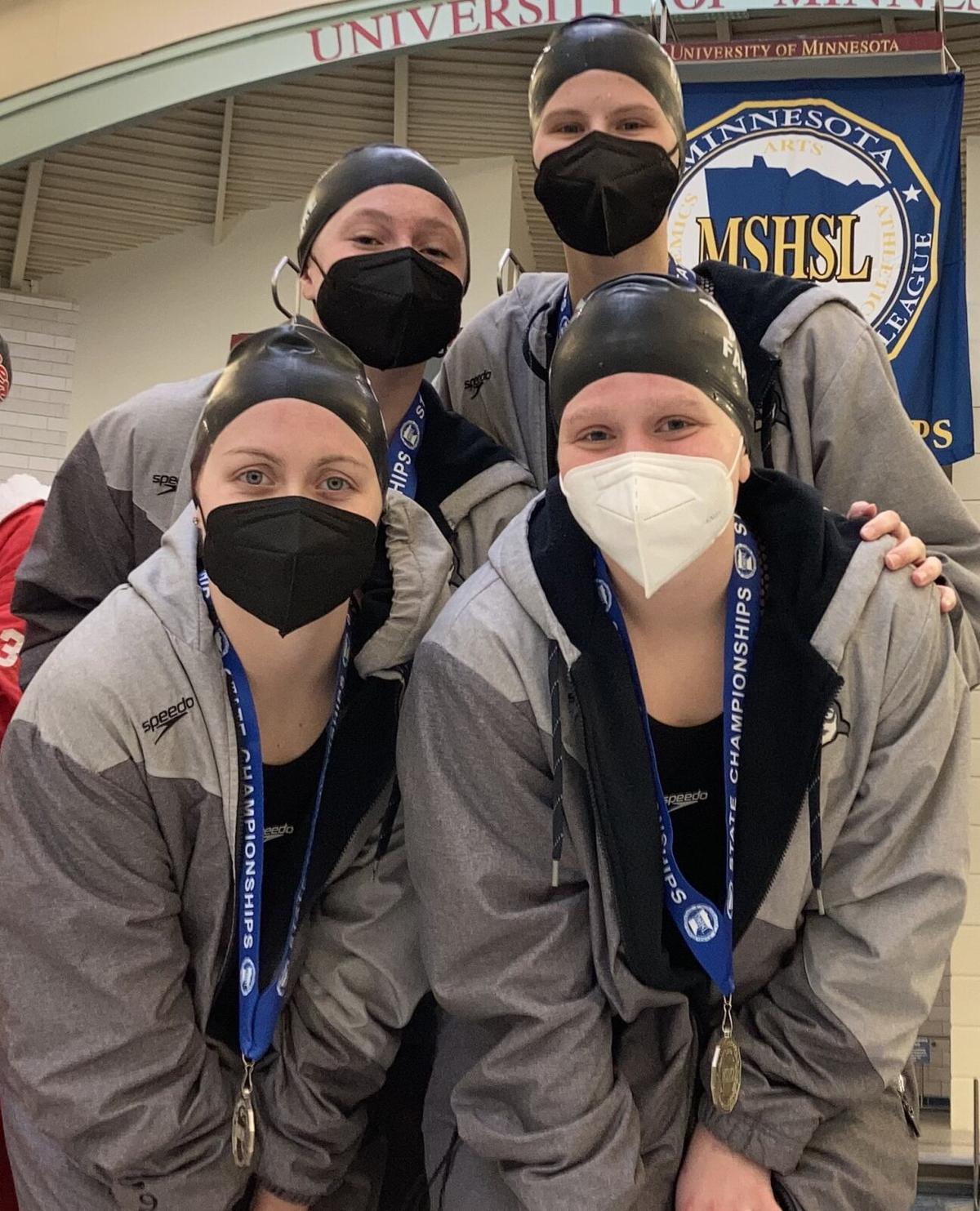 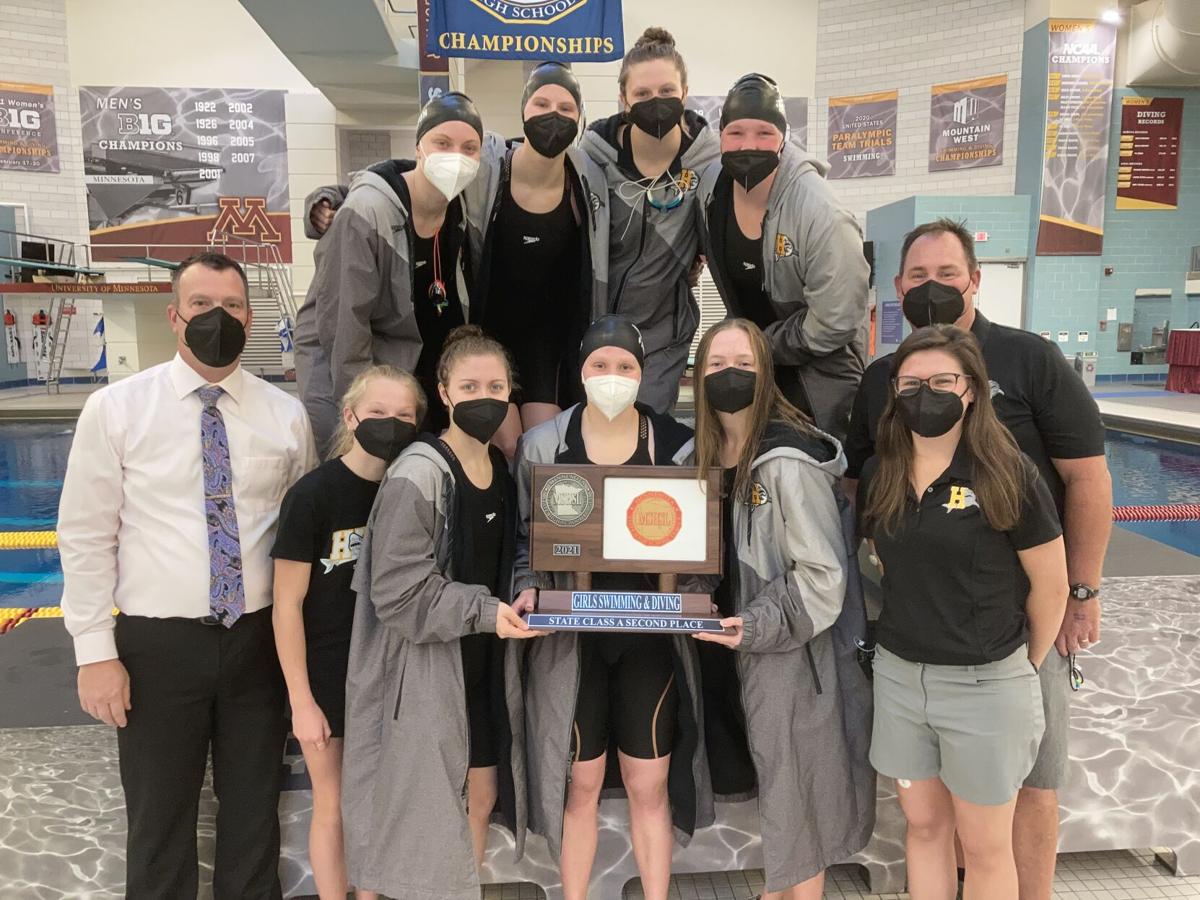 Swimmers and coaches on Hutchinson's 2021 girls swimming state team posed for a picture with their second-place state trophy. 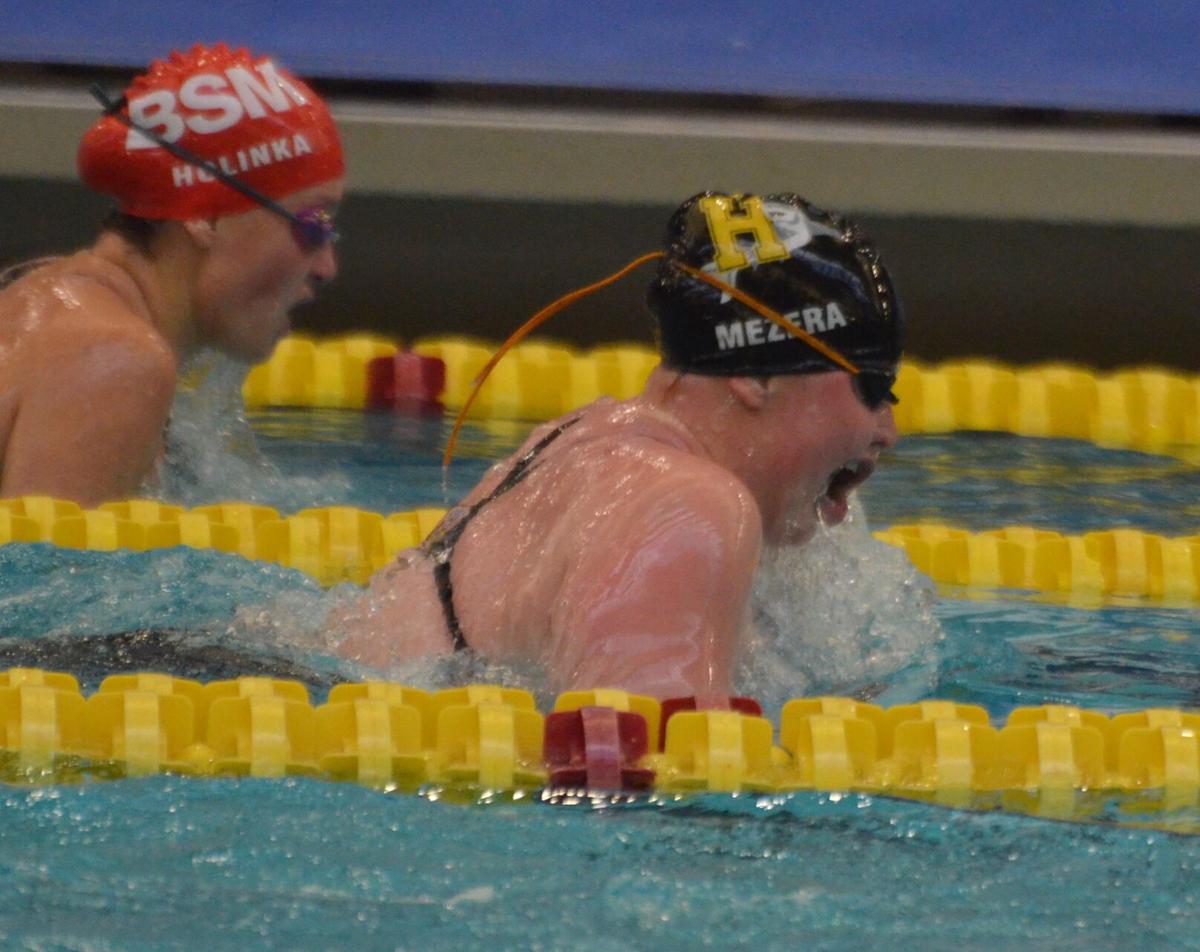 Hutchinson senior Jaiden Mezera swims her way to a 14th-place finish in the 200 individual medley. 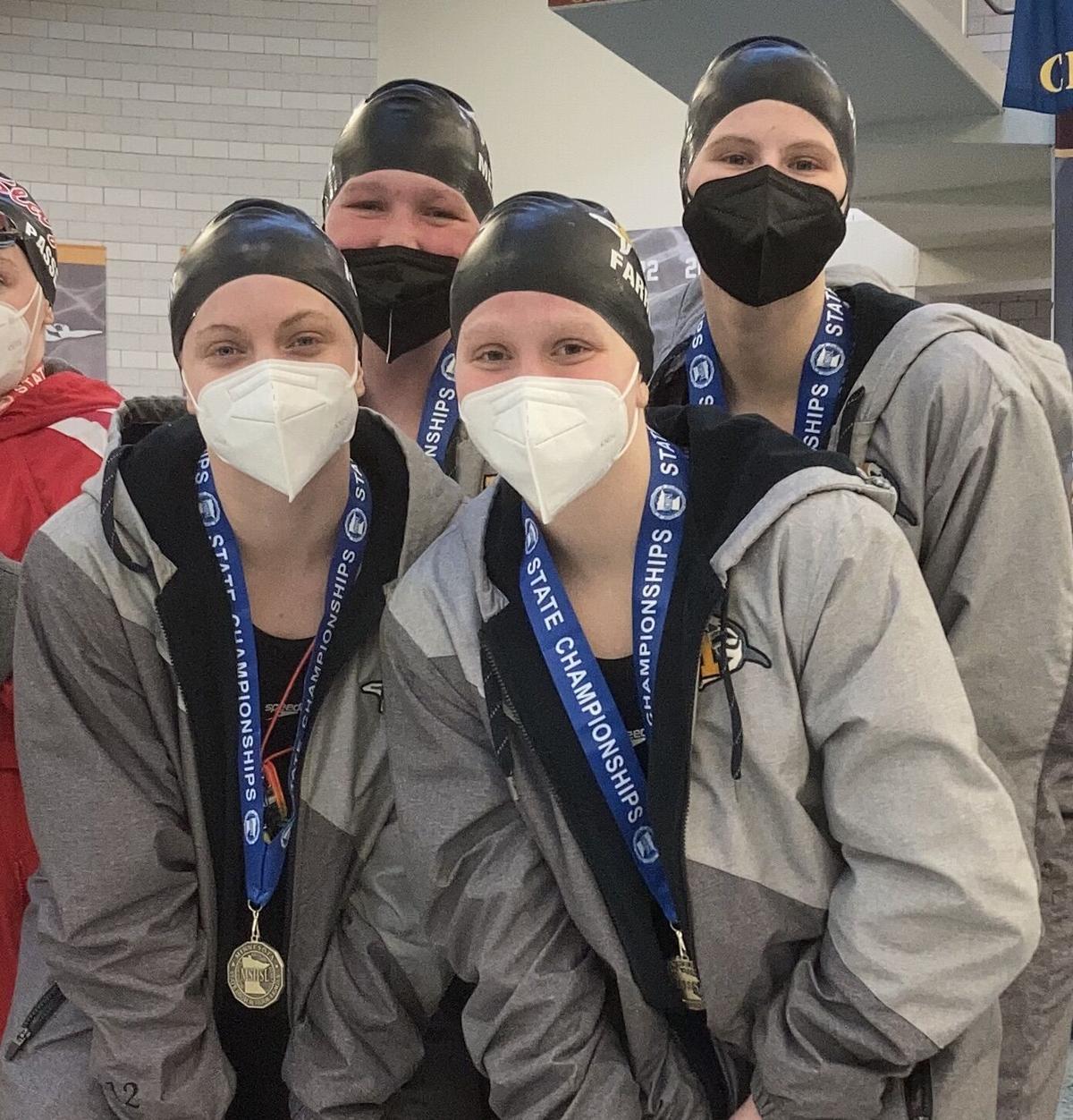 Jaiden Mezera, Kasidy Brecht, Grace Hanson and Hailey Farrell wrapped up the Class A State Championship with a first-place finish in the 400-yard freestyle relay. It's Hutch's fifth consecutive state title in the event, and Hanson and Farrell have been members of all five teams.

Hutchinson’s girls swimming team showed up to the Class A State Championship this past weekend with eight swimmers and 15 state entries in 11 events. When it was finished, the Tigersharks left with four state titles, two state records, 10 medals and a second-place team trophy to cap off another memorable season at the University of Minnesota Aquatic Center.

“It feels great,” said junior Madison Witte. “It’s a long, hard season, and it feels great to get second at state against all these great teams. It’s a huge accomplishment.”

“It’s kind of bittersweet,” said senior Jaiden Mezera. “I couldn’t ask for a better ending. I’m honestly going to miss this team so, so, so much.”

Hutch opened the tournament prelims Friday strong and managed to have all but one of its state entries make it back for the finals Saturday, including 10 in championship heats. The ’Sharks saved their best for last, however, piling up medals and points to finish second overall for a fourth straight year, not including 2020 when the state meet was canceled due to COVID.

Visitation won the state title for its eighth consecutive year, while Delano, Orono, Waconia and Mound Westonka/Holy Family, all Section 3A rivals to Hutchinson, finished third, fourth, fifth and sixth, respectively, demonstrating just how tough Hutch’s section was this year. Combined, competitors from Section 3A won seven of the 12 state events.

From state champions to first-time state qualifiers, all of Hutch’s swimmers wrapped up the tournament with reasons to feel good about themselves. The Tigersharks started off the finals in the best way possible, by winning the 200-yard medley relay with swimmers Kasidy Brecht, Madilyn Gehrke, Hailey Farrell and Witte. For Brecht and Gehrke, it was their first state championships ever.

“It’s really exciting and it gives you hope for the rest of the meet, starting it off on a good note and just looking forward to the rest of your events,” Gehrke said about the opening win.

“It felt really good to just start off strong,” Brecht said. “It’s was always good to start a meet off strong and have a positive attitude through it all.”

The Tigersharks capped off the tournament with their final win and the one with perhaps the most meaning of all, the 400-yard freestyle relay. The team of Hanson, Mezera, Brecht and Farrell brought it home, giving Hutchinson its fifth consecutive state title in the event. And if you include 2020, when there was no state meet but Hutchinson had the fastest time in the state, that’s an unprecedented stretch of six straight years of 400 freestyle relay dominance by the Tigersharks.

“I’m not going to lie, if I could pick any event to win it would definitely be the 400 freestyle relay,” said Farrell, who wrapped up her high school career with nine state titles. “Grace and I have been on this relay since we were in seventh grade, and we have not lost it. So it’s kind of a tradition and it shows how hard we’ve worked.”

While several swimmers have come and gone on those six 400 freestyle relay teams, such as Mezera, who earned her first state title on the team this year, Hanson and Farrell have been the common links. They started out winning the first championship in 2017 as seventh-graders, and they’ve continued that string of championships ever since.

“Hailey and Grace have been a huge part of that,” Fairbanks said. “To step in there as seventh-graders and handle that pressure, and be on there and have different girls get on that relay with them all the way through, it’s fitting that one leads it off and one anchors it for their last race.”

For Hanson, winning any state championship is a reason to be proud, but doing with a relay team is a special feeling.

“When you’re with your team, it is completely different,” she said. “It’s just so much better sharing this experience with your teammates, especially my seniors. It’s an amazing feeling to be able to go up on the podium with them.”

And Hanson has made several trips up the podium in her years as a Tigershark. She’ll graduate this year as Hutchinson’s all-time leader in state titles with 14. But you would never know it by her humility.

“I couldn’t have done any of it without my teammates,” she said. “They get me through every single day.”

And it was her teammates who helped Hutchinson to its second-place finish Saturday, even those who didn’t win state titles.

Farrell earned medals for second in the 200 individual medley and fourth in the 500 freestyle. Brecht came in fifth in the 50 freestyle and third in the backstroke. Gehrke had a big day, taking ninth in the individual medley and third in the breaststroke to set a school record again with her time of 1:05.25. Witte earned 14th place in the 200 freestyle and 10th in the butterfly. The 200 freestyle relay team of Hanson, Riley Borka, Witte and Gehrke also took second place, giving Borka, a senior, a nice token with which to remember her first trip to state.

“It was very nerve-racking, but very fun overall,” Borka said. “I think it was a really good way to end my senior year and leave on a high note. I’m really thankful for the team that swam with me, and whole team that was here with us.”

Even Hutch’s youngest state swimmer, freshman Izabelle Schwartz, had reason to be proud. Although she didn’t make it to the finals in the breaststroke, she just missed the cut with an 18th-place finish. She was seeded 25th going into the prelims and beat her section time by nearly a second.

“It was really exciting,” Schmitz said about her first state experience. “I have a great team I was able to come here with, so it was fun to spend time here with them.”

And so ended another great season for the Tigersharks. But it was also the final meet for Hutch’s five seniors, a group that not only led the team with its titles and times, but also as role models guiding the younger Hutchinson swimmers. Fairbanks knows it’ll be difficult replacing generational talents such as Hanson and Farrell, not to mention girls such as Brecht, Mezera and Borka, who were leaders inside the pool as well as out of it. But he also knows they’ve left a indelible mark on the team that will carry over after their graduation.

“I don’t know how many girls we had here just for the prelims, there were a bunch in the stands today for finals,” Fairbanks said. “It’s a testament to those seniors on their leadership and what they mean to everybody. It doesn’t matter what level you are as a swimmer, (the seniors) treat them with respect and honor and they get that in return from those girls.”