It’s playoff time in amateur baseball, and for the past four years the Region 12C Tournament has ended with the Hutchinson Huskies celebrating a championship and first-round bye in the state tournament.

Looking to qualify for state and win their fifth straight region title, the Huskies go into this year’s tournament as the No. 3 seed and set to face Loretto, the No. 6 seed, in the first round at 8:30 p.m. Friday, in Maple Lake, where all tournament games are being played.

Ahead of the playoffs, Hutchinson scheduled a pair of tune-up games to keep them prepared. The Huskies beat Raymond 4-1 July 29 in their final home game of the year, and on Monday they were scheduled to travel to Waconia for one more regular season game.

Another reason for the extra games was for manager Mike Kutter to get a look at other pitchers who may not have gotten many innings during the regular season, but who may be called on during playoffs. Against Raymond Kutter used the rotation of Dan Van De Steeg, Lane Glaser and Jordan Fleck. Van De Steeg pitched five shutout innings, while Glaser and Fleck gave up just one run in four innings.

“Overall, I really liked what our pitchers did tonight,” Kutter said Wednesday after the game with Raymond.

It was the first time this season Glaser took to the hill, after he, Dan and Jeremiah Van De Steeg spent much of the spring playing catch while waiting for the season to start.

“I felt really good to get out there again,” Glaser said. “I felt confident in all my stuff. Otis (catcher Cody Arlt) helps a lot back there. He's a veteran at this point, even while still being so young. It's awesome having him back there calling pitches.”

Although the Huskies only lost two North Star League games this year — one to Buffalo and one to Delano — Kutter said the Huskies can’t take any time lightly, especially since they’ve only faced each other once during the shortened season.

Hutchinson beat Loretto 5-1 in their third game of the year and first NSL game of the year. Jeremiah Van De Steeg was on the mound for that matchup, and Kutter said he’ll be there again when the Huskies and Larks face Friday.

“I don't want to get into looking ahead of teams and getting into bad habits and getting ahead of ourselves,” Kutter said. “Right now, we'll take care of Friday night and we'll go from there.”

It’s a double elimination tournament, which means two losses and the season over. However, if the Huskies can win their first two games this weekend, they’ll punch their ticket to the state tournament. The top four teams from the Region 12C tournament qualify.

Win or lose on Friday, the Huskies know they’ll have a good chance at winning their second game of the weekend as veteran pitcher Evan Kohli is returning. Kohli hasn’t played for the Huskies all year, but due to rule changes to accommodate the shortened season, he is eligible for playoffs. Kohli was Hutchinson’s ace last year, compiling a 1.75 ERA in 87.2 innings pitched. 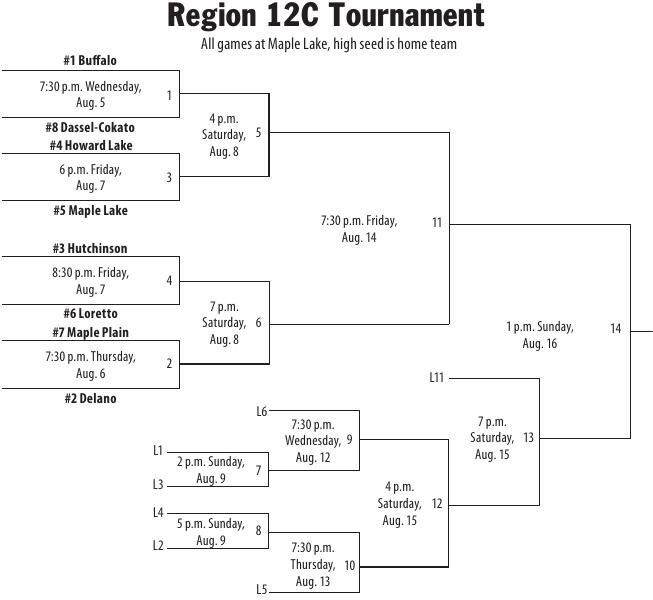 If Hutchinson hopes to win its fifth straight region tournament, it knows it will probably have to go through either Buffalo or Delano, the No. 1 and No. 2 seeds, or possibly even both. But that doesn’t frighten the Huskies.

“Both those games are ones that we think we could have had,” Glaser said about Hutch’s first meetings with top two teams. “But they're definitely ones that we want to get back at.”

Glaser mentioned that Buffalo had some new college players this season that the team hasn't seen before that took them by surprise. But they know the Delano team and have beaten them before. It's all about playing their game of solid pitching and defense that they believe will help carry them to state.

“The biggest thing is just going in there confident knowing we can win any of these games,” Glaser said. “I think the top-three seeds are definitely the favorites, but who knows, we've got to win the first one.”