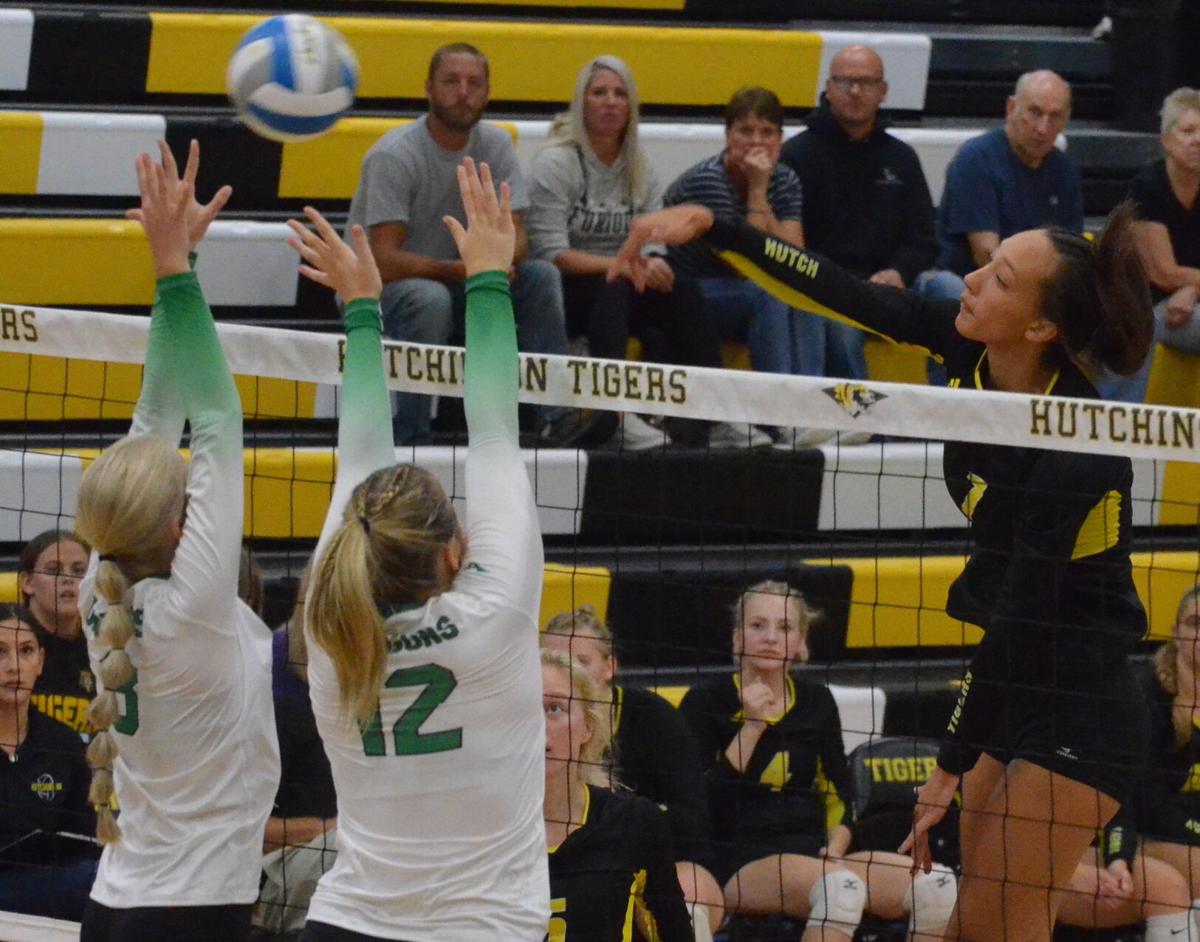 Hutchinson’s Adri Rhoda hits the ball above a pair of Litchfield blockers during Thursday’s home win. She finished the match with 20 kills to lead the Tigers.

Alyssa Stamer puts up a clean set as she finished Thursday's match with 34 assists.

Hutchinson’s Adri Rhoda hits the ball above a pair of Litchfield blockers during Thursday’s home win. She finished the match with 20 kills to lead the Tigers.

Alyssa Stamer puts up a clean set as she finished Thursday's match with 34 assists.

Hutchinson High School started classes last week, but on the volleyball court Aug. 31, it was Marshall that took Hutch to school in an early section matchup.

“I think we’re a good team,” he said, “but we’ve got reality that says, ‘OK, we’re not that good. We’ve got to work a little harder.’ Our message on Wednesday (Sept. 1) was that we’ve got to learn from that.”

And learn from it they did. Two days after their first loss of the season, the Hutchinson Tigers were home again to host Litchfield, and this time they were on the winning side of a 3-0 blowout, beating the Dragons 25-14, 25-14 and 25-11. While the competition level between Marshall and Litchfield may not be equal, Piechowski and the Tigers were glad to get back in the win column with a dominant victory.

“Marshall was a tough game, mentally and physically, and I think that took a toll on us,” senior hitter Adri Rhoda said after Thursday’s win over Litchfield. “Today was kind of an easier match and I think we were more confident in this game.”

The numbers certainly seem to indicate Hutchinson felt better against Litchfield. The team pounded out 40 kills against the Dragons, spread out among seven hitters, but against Marshall they had just 17 kills between six hitters. Marshall also proved to be better at receiving serves as Hutch didn’t score an ace for the entire game.

“We knew Tuesday that Marshall was a pretty good team,” Rhoda said. “They’ve always been a good team. … We’re not mad at ourselves at all, we know we worked hard, they’re just a really good team and we’ve got some stuff to work on.”

Piechowski agreed with Rhoda, crediting his players for having good hits, but just not quite good enough to defeat Marshall’s defense.

“Our message (Wednesday) in practice was, ‘Guys, we’ve got to turn it up. We’ve got to start becoming more relentless and more confident and be Marshall to beat Marshall,” Piechowski said. “So the expectation is that no matter who we play, we have to gear ourselves for that October run.”

Piechowski said the Tigers seemed to take that message to heart on Thursday, but they’ll have to keep getting better as the season continues. “It’s not where we start, it’s where we finish,” Piechowski said.

The good news, he added, is that playing Marshall early means they know where they have to get by the end of the season. Their hope is to be able to turn the tables on Marshall in the section playoffs.

“We definitely want to see them again,” Rhoda said. “Every practice, every game we’re trying to get better so we can play them, because that’s our goal. That’s who we want to beat.”