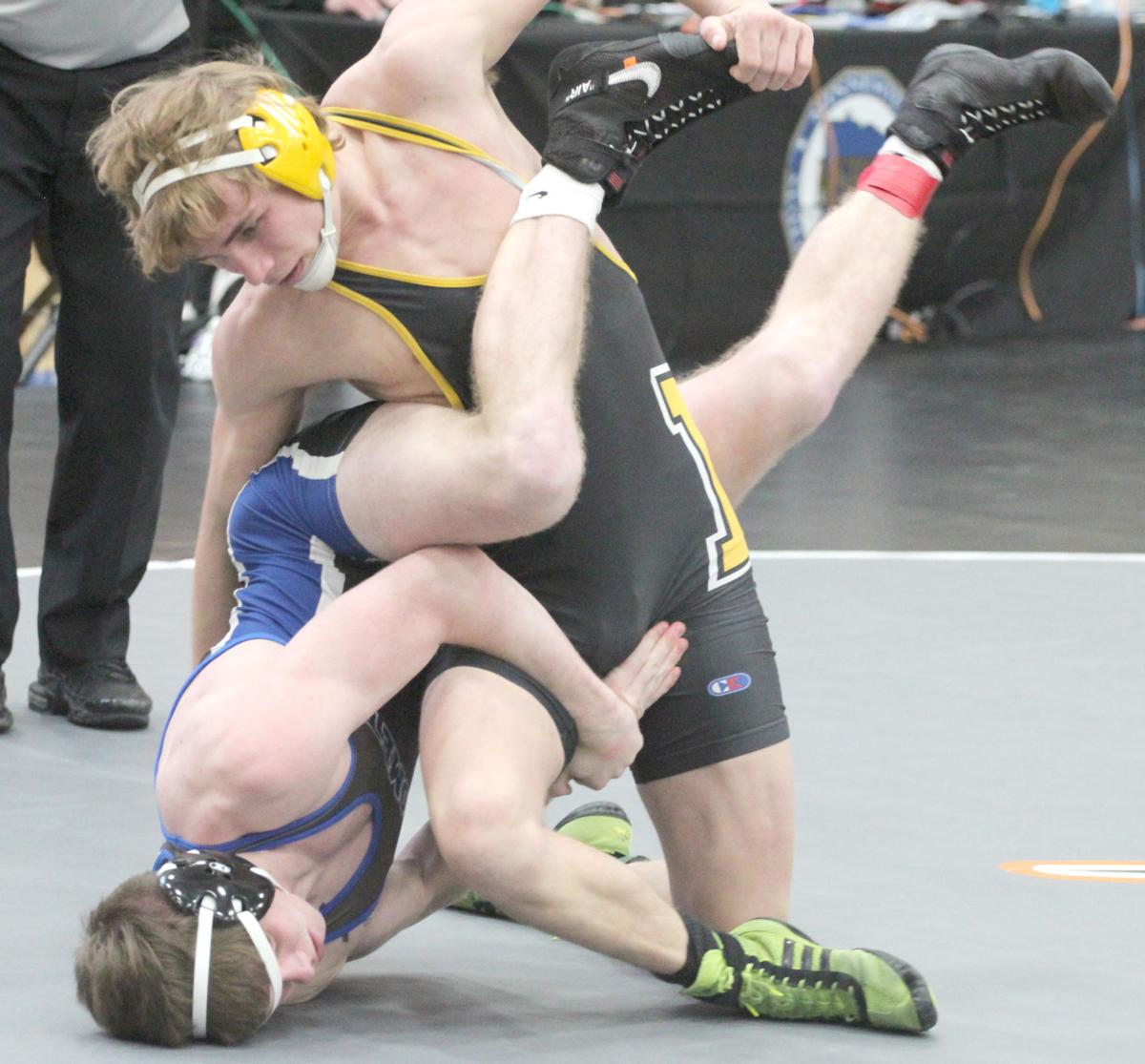 Tiger wrestler Cale Luthens was twisted up with Simley’s Travis Smith in their fifth-place state match Friday. Luthens pulled out a 6-5 win to finish his high school wrestling career with a victory. 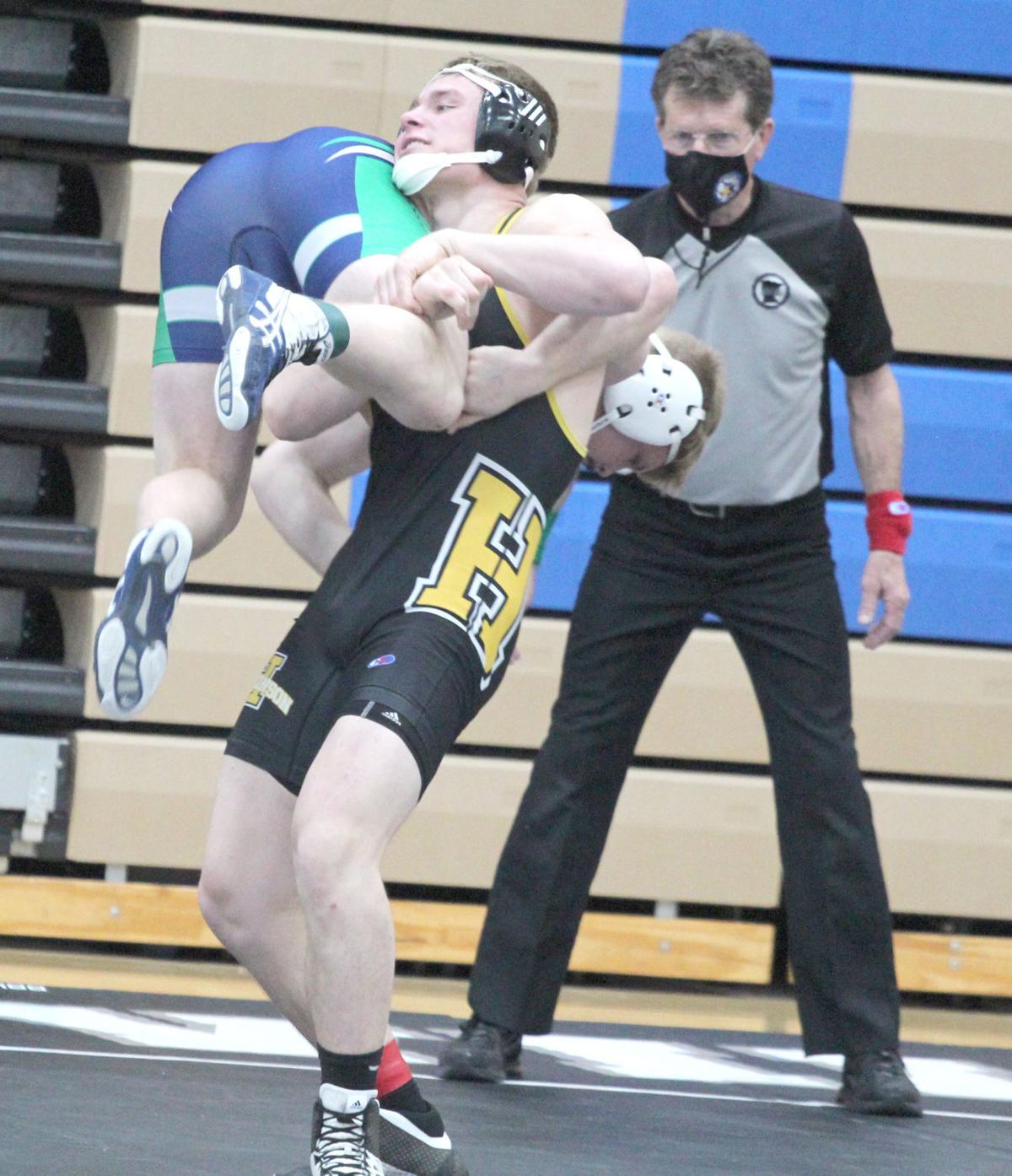 Hayden VanderVoort, the Tigers’ 195-pounder, picks up Dassel-Cokato/Litchfield’s Beau Nelson during their wrestleback match Friday. VanderVoort earned a 5-0 win and went on to a fifth-place match for his first state medal.

Tiger wrestler Cale Luthens was twisted up with Simley’s Travis Smith in their fifth-place state match Friday. Luthens pulled out a 6-5 win to finish his high school wrestling career with a victory.

Hayden VanderVoort, the Tigers’ 195-pounder, picks up Dassel-Cokato/Litchfield’s Beau Nelson during their wrestleback match Friday. VanderVoort earned a 5-0 win and went on to a fifth-place match for his first state medal.

Out of hundreds of Class AA wrestlers in Minnesota, only 42 got to end the season with a win this year. Hutchinson/BLHS grapplers Cale Luthens and Hayden VanderVoort were among that group as the two Tigers wrestled to fifth-place finishes in the state individual tournament Friday at St. Michael-Albertville High School.

“I finished strong,” Luthens, a 170-pound senior, said. “It was good to get those last two wins at the end. If I could go back I would, but looking back, it was a good tournament.”

“It feels really good,” said VanderVoort, a 195-pound sophomore. “I went into the season just wanting to make it (to state), and to be able to go there and place and have a good showing was pretty fun.”

The two Tigers followed the same path, losing their first match and finishing up with two wins to earn medals. But the final tournament was different this year. Due to COVID-19, the format was changed so that there were more tournaments, but with smaller groups. That meant when the two Tigers got to the final showdown, there were only eight wrestlers left, compared to 16 in past state tournaments.

“It was definitely different,” Luthens said. “You don’t have that first-round match, that’s already done, so you know you just have to get there and wrestle top-tier kids right away.”

“This year with the dual format we didn’t get to have any tournaments,” Luthens said. “So this was kind of the first time of the year. I’m definitely feeling it today. I’m really soar.”

Luthens’ three matches were especially close, including a 7-5 loss in the opener. Luthens scored an early takedown, but his opponent managed to escape and scored a takedown of his own in the final seconds of the first period. From there, the two exchanged points and Luthens ran out of time before he could score one more takedown.

“I knew he was good, and he had a game plan coming in,” Luthens said. “He was well-coached and knew what I kind of like to do.”

The senior quickly bounced back from the loss to earn a narrow 5-3 win in his second match, and then he wrapped up with a 6-5 win in the fifth-place final, repeating his fifth-place finish from last year.

Cale is the younger brother of another former state wrestler, Brock Luthens, who graduated in 2018 and earned three state medals during his high school career, including a pair of third-place finishes and a fifth-place finish his senior year. While Brock cheered from home Friday, like many brothers, Cale admitted there was some sibling rivalry between the two.

“We always take shots at each other with our accomplishments and everything,” he said. “But it’s in a good manner.”

A shot at the champ

“I was just happy to stick with him,” VanderVoort said. “I went in there and didn’t really know how I was going to come out. I was just going to maybe catch him in something, but he didn’t really make any mistakes.”

“After the loss, I wasn’t that mad because it wasn’t like I lost to somebody I should have beat or anything,” VanderVoort continued. “Going into the second match I was a little nervous, but I knew I just had to go out there and do my stuff.”

Boosted by his close battle with the No. 1 seed, VanderVoort cruised through his final two matches with 5-0 and 8-3 wins to earn some hardware in his first state tournament appearance. And with two more years of high school wrestling ahead of him, he’s already setting goals for 2022.

“For the state side of things, I want to get in the top three,” he said. “That should be doable, but we’ll see.”