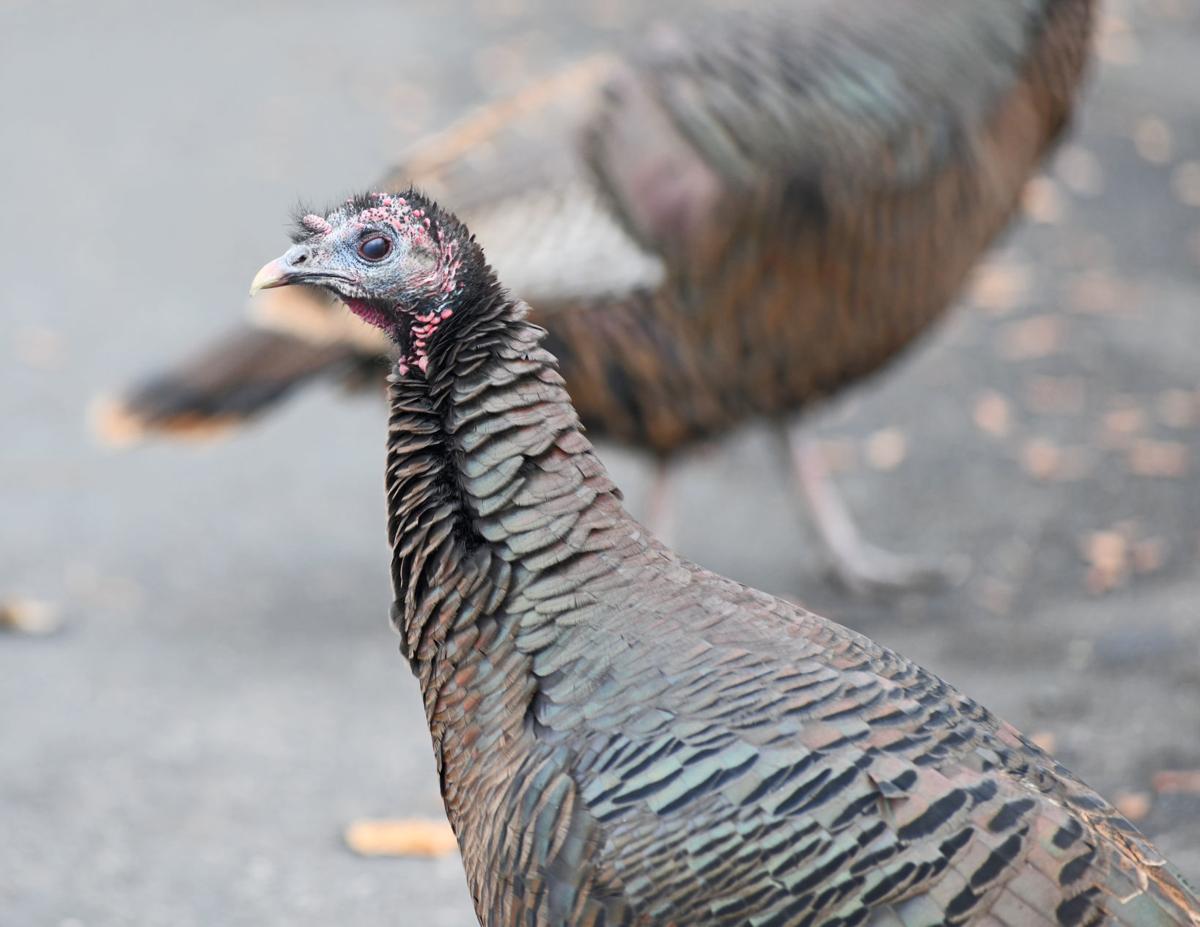 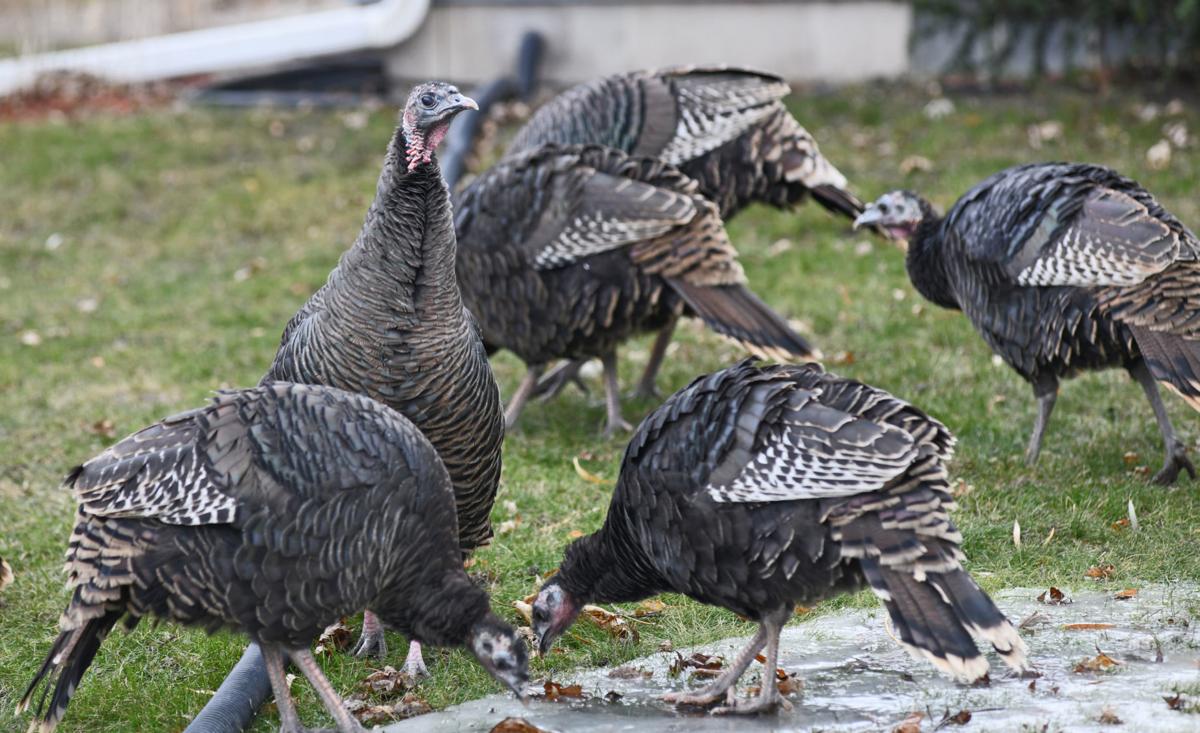 A group of turkeys congregated on Pishney Lane last fall. They're often seen wandering around neighborhoods near Second Avenue Southwest. 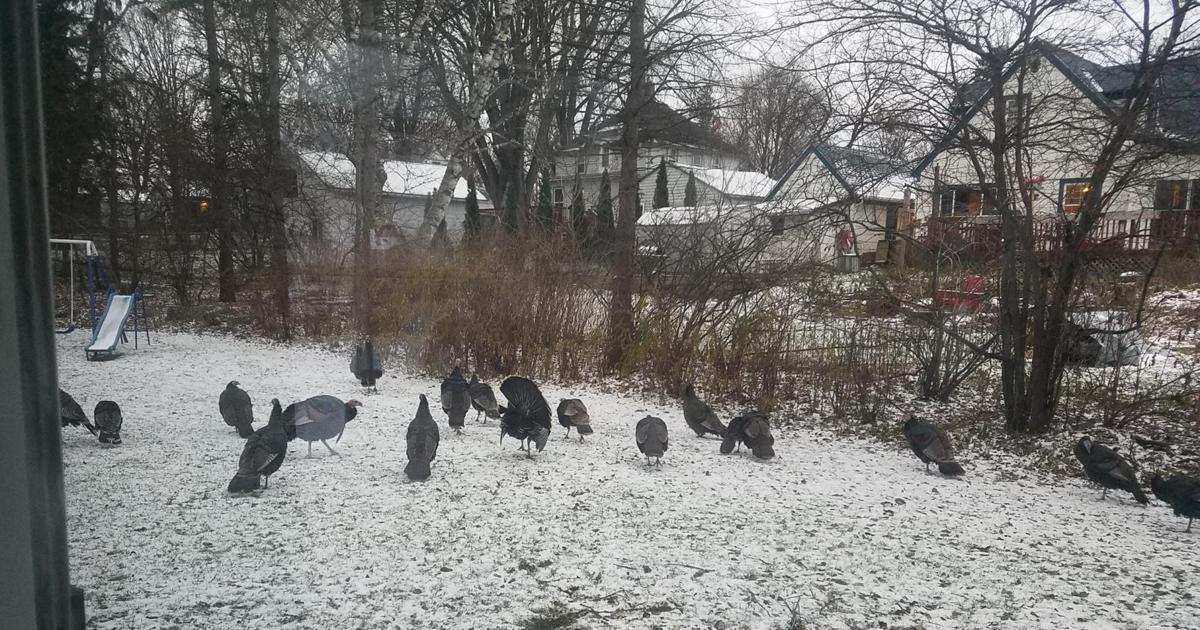 This large group of turkeys recently appeared in Missy Kohls’ backyard. It’s unclear how many groups or individual turkeys are currently roaming town.

A group of turkeys congregated on Pishney Lane last fall. They're often seen wandering around neighborhoods near Second Avenue Southwest.

This large group of turkeys recently appeared in Missy Kohls’ backyard. It’s unclear how many groups or individual turkeys are currently roaming town.

It’s not Halloween anymore, so some Hutchinson residents living near Crow River might be wondering why a pack of aggressive monster birds are likely to ruin their yards and threaten them with beady, far-off stares.

Hutchinson appears to have a poultry problem. For those who haven’t encountered them, turkeys roam the residential areas in packs, or bird herds.

However, Pishney Lane resident Jennifer Hanson said her 6-year-old son has a plan to fight off the renegade turkeys.

“He goes out there and hunts them with his Nerf gun,” she said.

According to her and other residents, the wandering flock, though good for Nerf practice, can have a few negative effects on the neighborhood. They tend to give people the creeps, for one.

“They can scare you out of nowhere,” Hanson said. “You’ll open the door, and they’ll be right there. They peck at your grass, and they’ve wrecked our backyard. They don’t move when you’re driving down the street and honk at them.”

Hanson, like others, believes the turkeys are a traffic hazard.

“They like to sit on Dale Street quite a bit,” she said. “You can try to honk at them, but they’ll just stand there and look at you.”

Resident Missy Kohls said a friend of hers accidentally hit a turkey with his Chevy Silverado pickup truck and received extensive damage.

“They absolutely cause a hazard,” Kohls said. “If you hit them, it’s serious damage to your vehicle. (The turkey) took out his whole front driver side lights, dented the grill, dented the front quarter panel. It didn’t look like much damage, but when they opened the hood, they couldn’t shut it again.”

While these birds pose traffic risks, Hutchinson Police Chief Dan Hatten said personal injury has not been an issue.

“They’re not dangerous,” he said. “Depending on the season, they can appear to be aggressive and chase cars.”

Kohls and City Administrator Matt Jaunich said the turkeys act their most aggressive during spring and fall, which appear to be their mating seasons.

“The fall is when we’ll see the toms battle it out with each other, and that can go on for hours,” Kohls said. “They will plow each other into trees, and they pushed each other into our neighbors’ garden shed. That part is scary. (When it’s mating season and they’re in the backyard), we just take our kids to a park.”

Resident Linda Peck reported different findings than those of Hatten.

“They attacked the mailman,” she said. “Our mailman said he’d tried pepper spray, and the turkeys backed off. The next day, they didn’t. My husband and our dachshund were down there, and the dog saved the mailman.”

In addition to reports of aggressiveness, another thread tied these accounts together: poop.

To deal with these problematic poultry, the city adopted a wildlife control policy in 2015 based on complaints from residents.

“Our population goal in town for public safety issues is no more than 12 turkeys that have become a nuisance within the city,” the policy states. “This number will serve as our trigger point when we need to assess removal options.”

Hanson said she counted at least 20 or so turkeys on her street last week.

According to Hatten, the police department has taken measures this year to control the population, as it has in years before. This time, though, the department is focusing on eliminating turkeys at their source.

“We’ve made certain attempts to capture the turkeys, but our primary focus is disrupting nests so we hopefully limit the amount that are hatched,” Hatten said.

Hatten said the department catches and disposes of turkeys using nets, as it is at least a safe and humane method.

“Maybe it’s not the most effective way,” he said. “I don’t want firearms or arrows used in the city just to limit what is only a nuisance.”

According to Hatten, residents are not to dispose of the turkeys on their own. The DNR also prohibits the turkeys from being transported to different habitats, as they could introduce diseases to the fauna. When police get hold of the birds, however, they are put to use by being processed and donated to a local food shelf.

Residents at war with the turkeys may disrupt them with yelling. They can also cut off the turkeys’ food supply by removing any bird seed or animal feeders from their front yards, Hatten said.

Though dissatisfaction with the turkeys appears to be the prominent opinion in Hutchinson, some residents are pro-turkey.

“They’re interesting to watch,” Peck said. “They’re comical in that they’re just really large birds. … The hens and babies come right up on the deck.”

“(The) only negative I ever experienced about them was that they would hold up traffic once in a while,” said Dustin Mettner. “Positive, I guess I was just making friends with turkeys.”

Should Hutchinson add a splash pad to its parks system?

As part of the Hutchinson's Parks, Recreation and Community Education Master Plan, City Council is exploring the addition of a splash pad, for which design and construction is included in the 2022 Capital Improvement Plan. Should Hutchinson add a splash pad to its parks system? Tell us what you think in this week’s online reader poll.