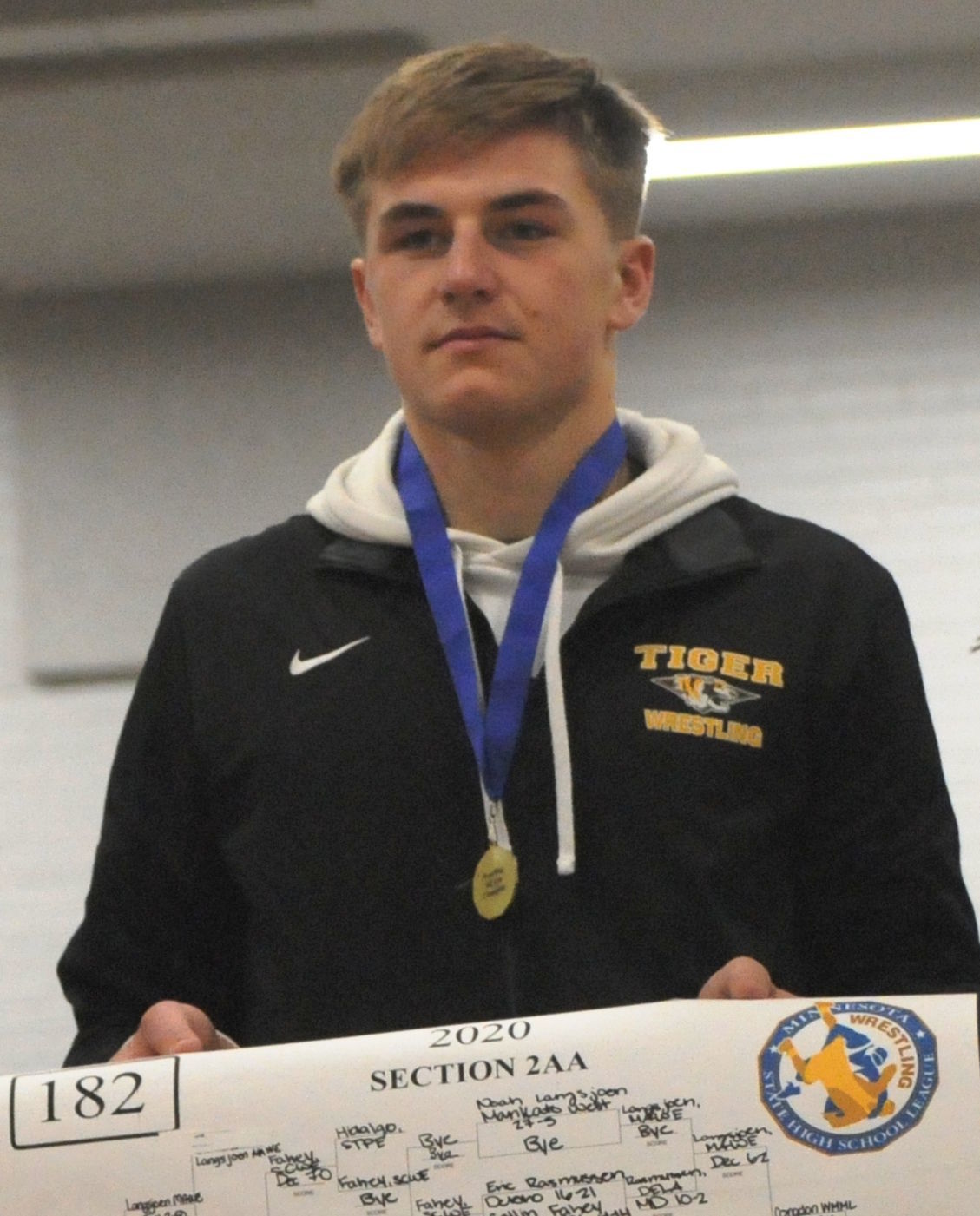 Alex Nelson of Hutchinson/BLHS won the 182-pound title at the Section 2AA individual wrestling tournament in Hutchinson. He was the Tigers’ only section champion but one of four state qualifiers. 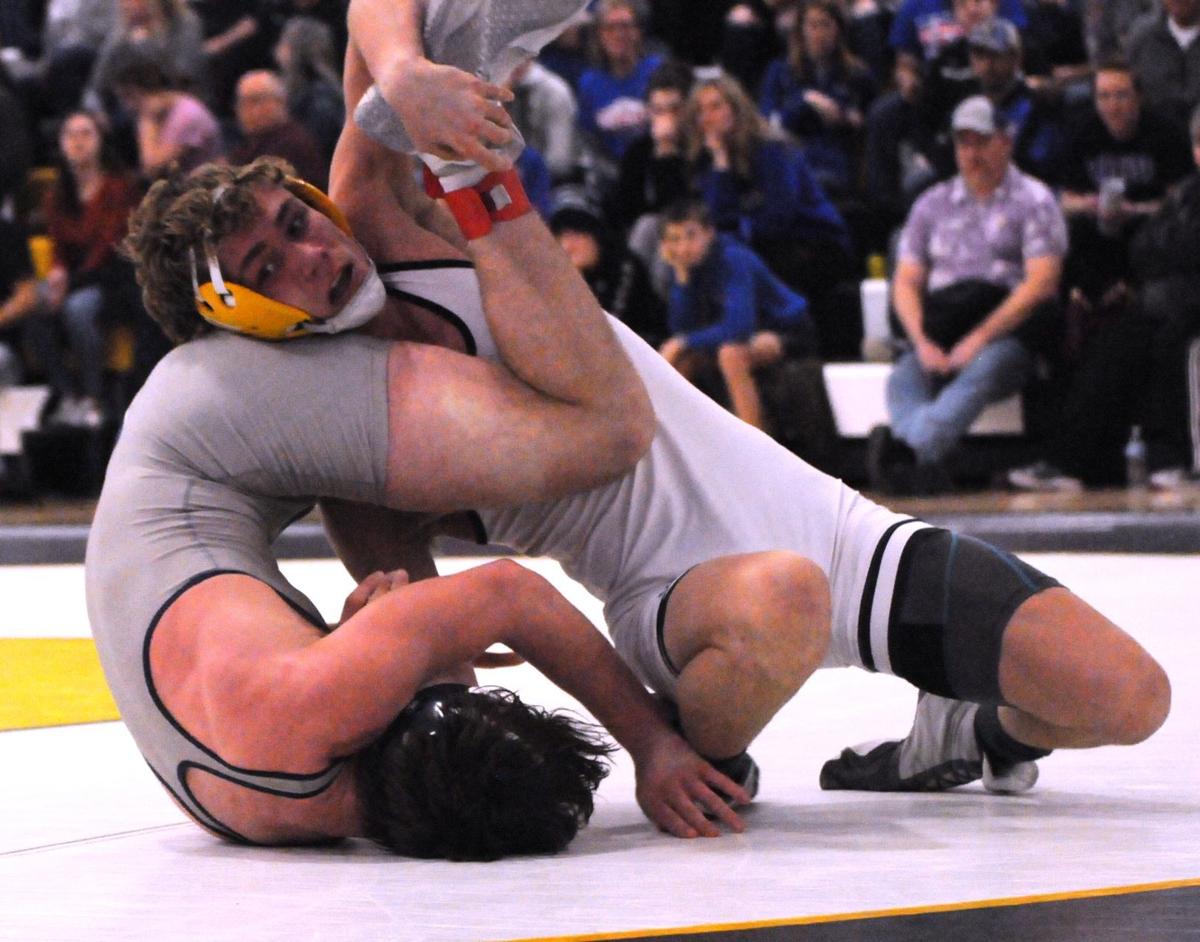 Cale Luthens, right, gets the upper hand for Hutchinson/BLHS in his true second match Saturday. 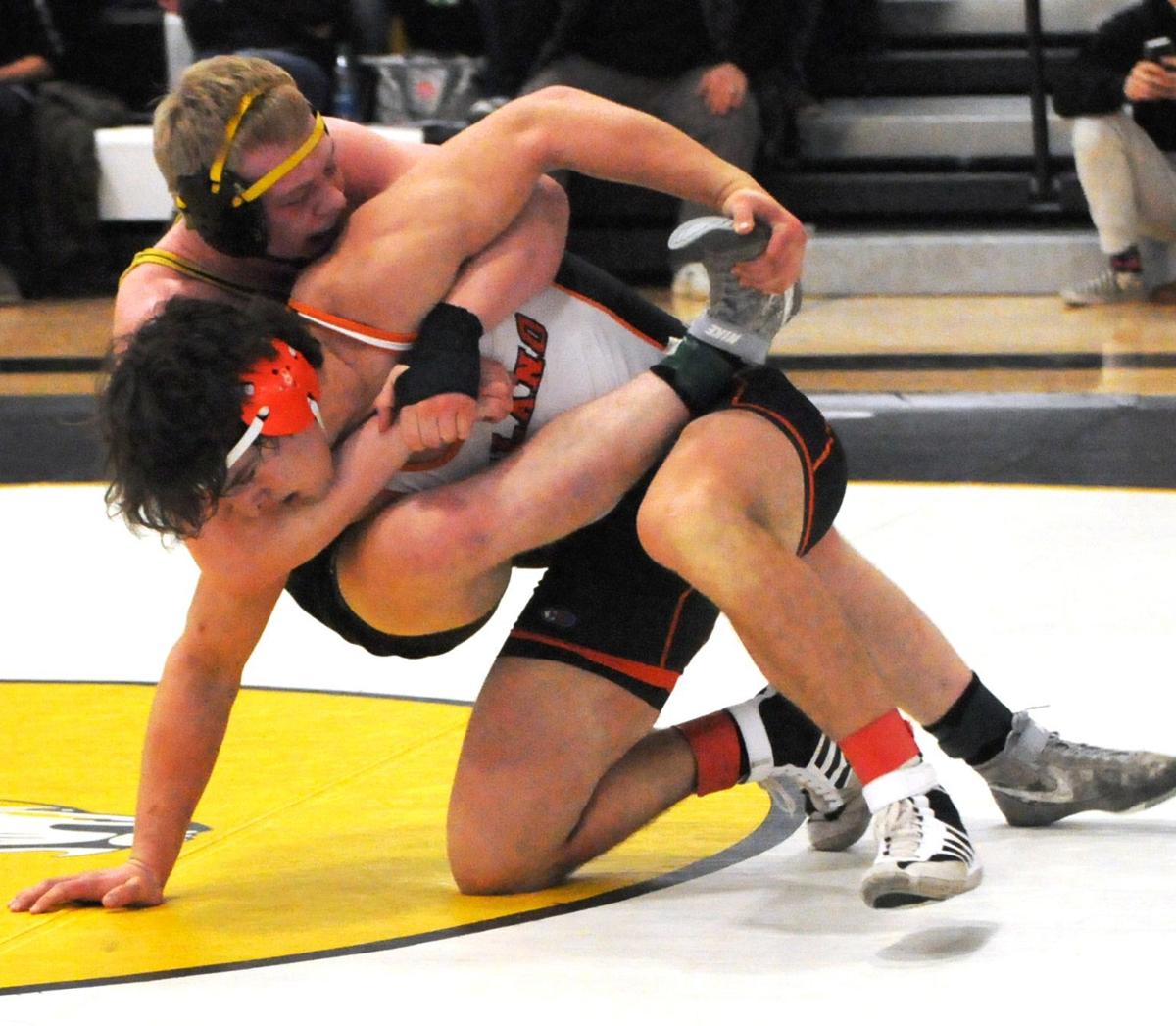 Cody Kurth, top, captured second at 220 pounds for Hutchinson/BLHS at the section tournament and takes a 39-5 record to state. 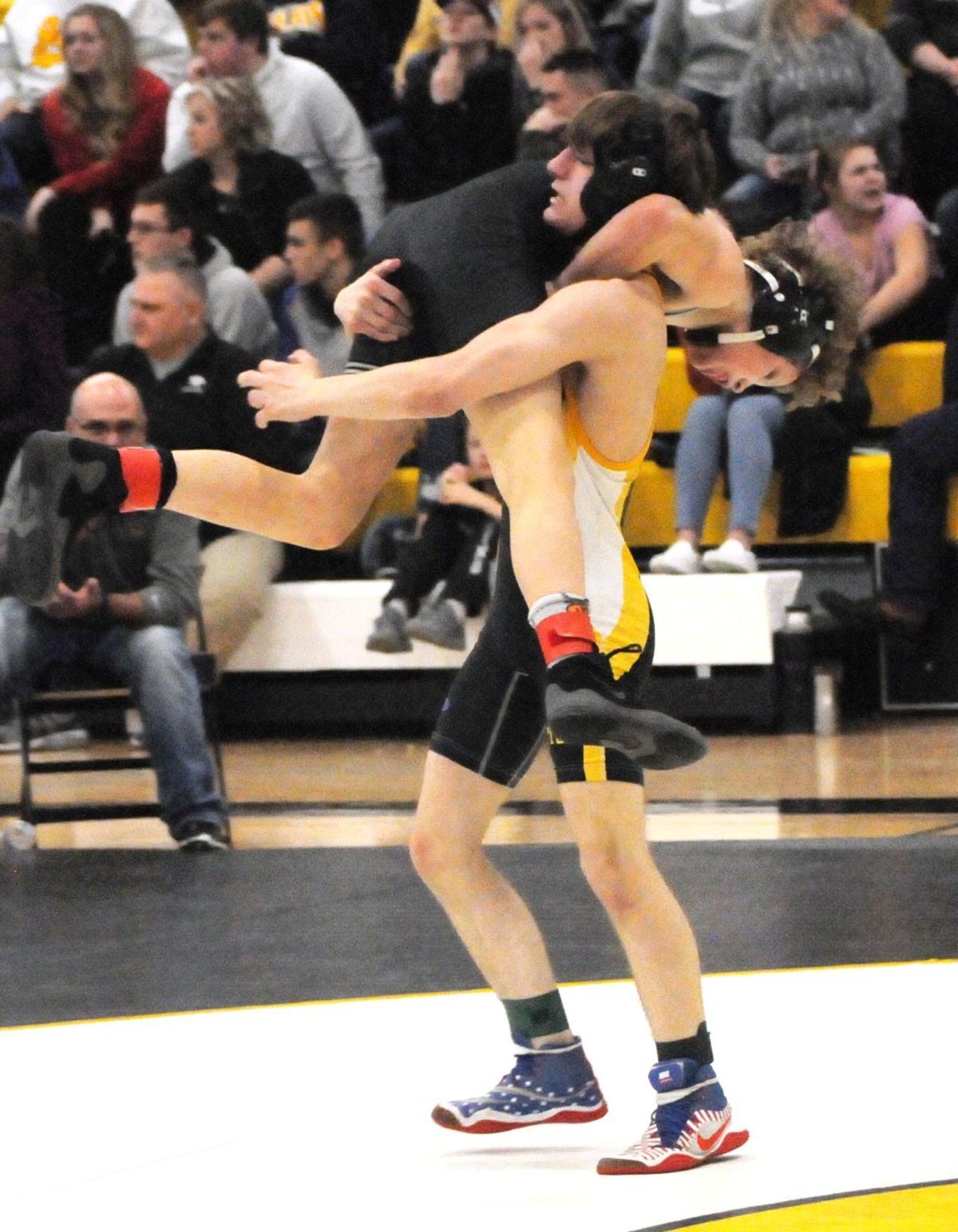 Grant Peirce of Hutchinson/BLHS had a strong finish when winning his true second match, qualifying for the state tournament.

Alex Nelson of Hutchinson/BLHS won the 182-pound title at the Section 2AA individual wrestling tournament in Hutchinson. He was the Tigers’ only section champion but one of four state qualifiers.

Cale Luthens, right, gets the upper hand for Hutchinson/BLHS in his true second match Saturday.

Cody Kurth, top, captured second at 220 pounds for Hutchinson/BLHS at the section tournament and takes a 39-5 record to state.

Grant Peirce of Hutchinson/BLHS had a strong finish when winning his true second match, qualifying for the state tournament.

What a difference a year makes for Hutchinson/Buffalo Lake-Hector-Stewart wrestlers. After sending no wrestler to the state tournament last season, not only did the team qualify for the first time in 17 years, but four advanced to state from last weekend's Section 2AA individual tournament hosted by Hutchinson.

Success is even sweeter when you hear how close some have come in recent years and after hearing how hard they have worked to finally break through and achieve a dream.

Senior Alex Nelson was the only Tiger to capture a section title, taking a 32-6 record to state at 182 pounds. Three others lost title matches and two had to win true second matches to advance: senior Grant Peirce at 113 and junior Cale Luthens at 152. Senior Cody Kurth also took second at 220 but did not have a true second match.

Coach Todd Card said the difference from last year is how the Tigers handled the tough, emotional tournament while trying to qualify for state.

“It can weigh on our hearts, but they gave it their all right to the end,” Card said. “We have a great coaching staff that teaches them the technique. It is their job to work hard. I am excited for all those guys to get their opportunity.”

“I beat him in the first match of the season, but I came into the title match a little nervous,” said Nelson, who was determined not to finish third at sections again, like he had the past two seasons. So he concentrated on conditioning, especially his upper body.

“Before football and wrestling I was in the gym every day lifting,” he said.

Card said Nelson is coming on strong, wrestling his best and is putting it all together at the right time.

Peirce went against a defending state champ, Mason Gehloff (36-1) of Waseca, in the finals and lost 1-0. Last year Peirce lost 1-0 to Gehloff in the semifinals and then lost the third place match in overtime. This year Peirce defeated Matt Randolph of Scott West 8-3 to advance to state with a 37-10 record.

“I have been wrestling since kindergarten, and I wanted to go to state since ninth grade,” Peirce said. “At state I want to go and try to push through everybody, and hopefully beat Mason when it really matters.”

Luthens lost his 152-pound title match 3-1. In his true second match, it took six overtimes to finally win 3-2 over Zachary Voelz (37-5) of Glencoe-Silver Lake/Lester Prairie. He takes a 36-7 record to state.

Last year Luthens was one match away from qualifying but lost in the finals and lost a close true second match. He has also wrestled since kindergarten and was always dreaming of competing at state.

“This year we have all been putting a lot of work in the room, just waiting for this day,” said Luthens. “And now here we are going to state.”

Kurth lost his title match to Edward Hajas (38-3) of Delano and takes a 39-5 record to state. He lost to Hajas in overtime earlier in the year as well.

“I was upset in the last two section tournaments,” recalled Kurth, who had two cousins place third at state. “I said to myself that I can’t mess up here.”

Kurth said it was nice having won the section team tourney a week earlier, which took some of the pressure off because “you know you are going to state either way.”

Hard work and focus was also a key factor for Kurth, who lifted in the offseason to get stronger and participated in a couple of wrestling camps.

While four qualified for state, other Tiger wrestlers came close but still earned spots on the section podium.

BOUND FOR THE X

The Class AA state team tournament starts at 11 a.m. Thursday, Feb. 27, at the Xcel Energy Center in St. Paul. Hutchinson will open against the No. 3 seed, the Foley Falcons. The Falcons were ranked No. 4 in the final state poll and are 39-1 going into state. While they haven't faced the Tigers yet this year they did have several common opponents. Foley's lone loss was to the New Prague Trojans, who won the Wright County Conference East Championship.

The winner of that opening match will move on to the championship semifinals while the loser wrestles in the consolation semifinals.

Individual matches start at 9 a.m. Friday and Saturday, Feb. 28-29, at the Xcel Energy Center. Winning the first match is always important as the loser is never guaranteed a second chance.

Nelson faces Reid Kraus (35-13) of Becker in his opening match at 182 pounds. Neither wrestler is ranked, nor have they faced each other in the past. But whoever wins is likely to face Tanner Young (34-3) of Pierz, the No. 4-ranked wrestler in state, in the second round.

The matchup isn't much easier for Luthens at 152 pounds. He'll face Joe Jeans (39-4) of Bloomington Kennedy who is ranked No. 5.

No matter who the Tigers face, they know they're at the state tournament and only the best wrestlers in Minnesota are left. If they want to move on and advance toward the podium, they'll have to wrestle their best in every match.

How closely are you following Gov. Tim Walz' stay at home order?

Gov. Tim Walz last week announced a stay at home order in response to COVID-19 that went into effect Friday night and will last two weeks. How closely are you following the order? Tell us in this week's online reader poll.