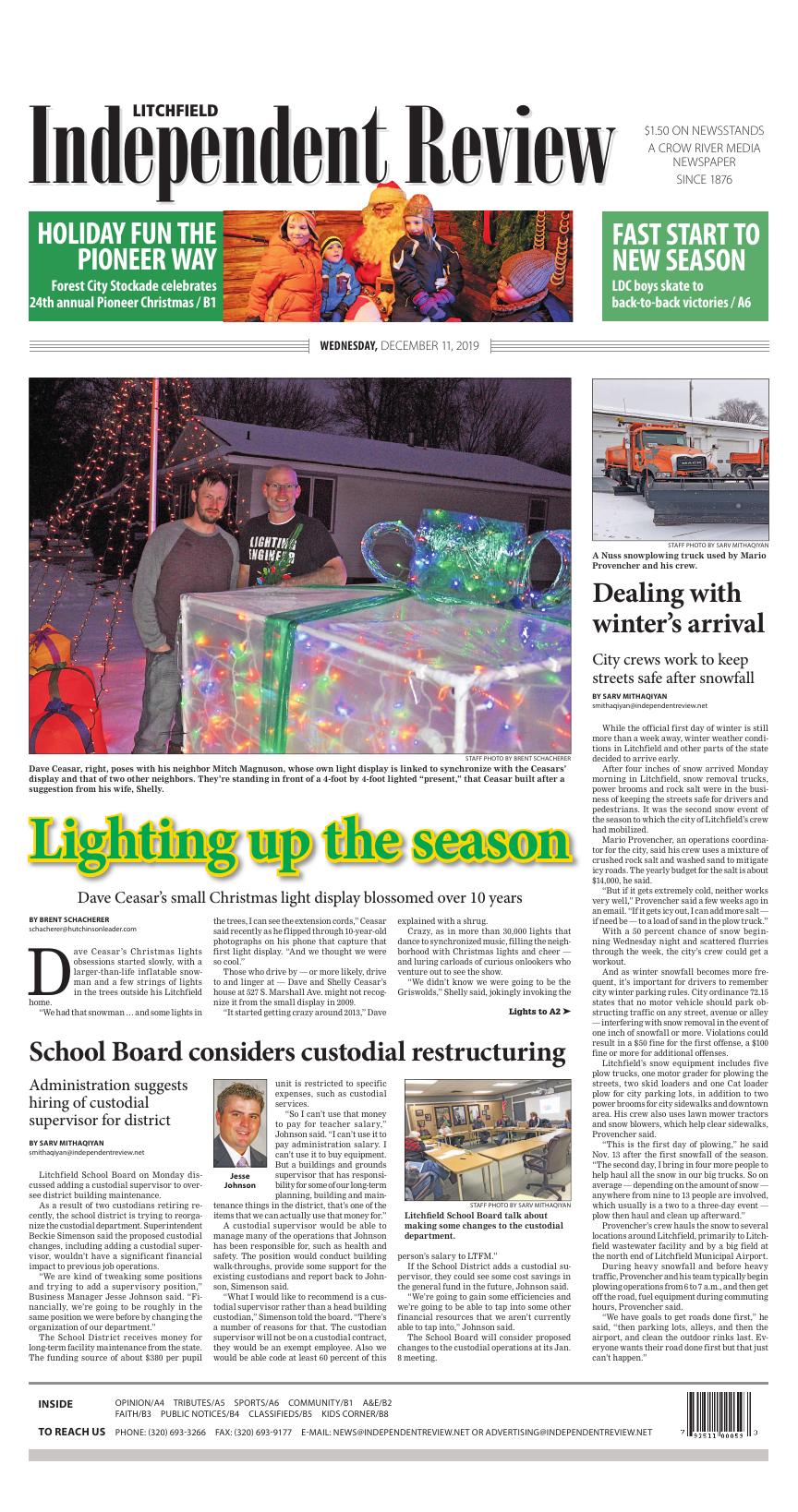 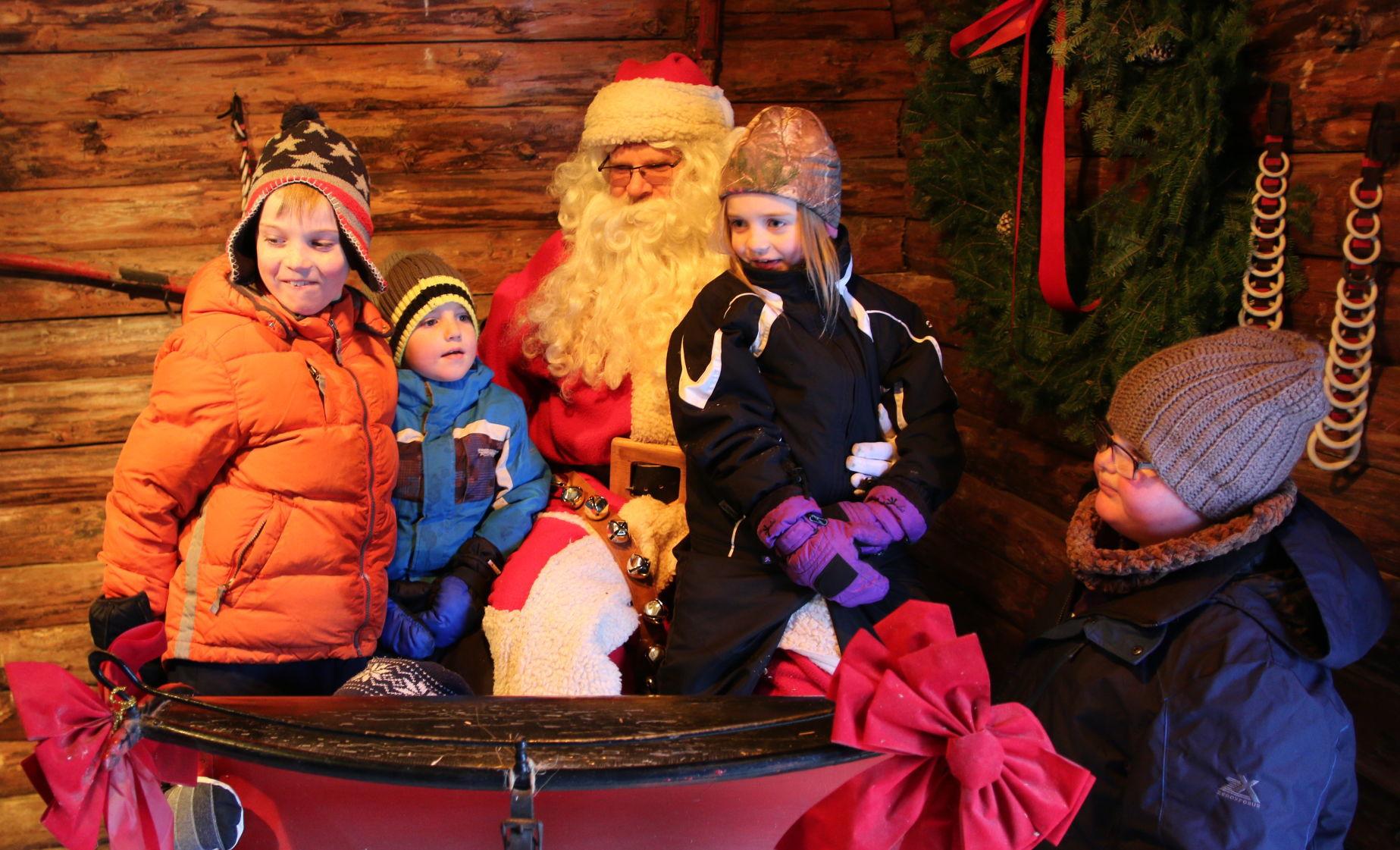 Dave Ceasar stands in front of some of the many lights — about 30,000 of them in all — that are part of his family’s Christmas lights display.

Dave Ceasar, right, poses with his neighbor Mitch Magnuson, whose own light display is linked to synchronize with the Ceasars’ display and that of two other neighbors. They’re standing in front of a 4-foot by 4-foot lighted “present,” that Ceasar built after a suggestion from his wife, Shelly.

Dave Ceasar checks his computer monitor, which shows the synchronization of lights in his Christmas display.

A closeup of the lighting display on the computer monitor.

Many of the items in Dave Ceasar’s Christmas lights display are of the do-it-yourself nature. He sees an idea he likes and figures out a way to build his own.

Many of the items in Dave Ceasar's Christmas lights display are of the do-it-yourself nature. He sees an idea he likes and figures out a way to build his own.

Dave Ceasar stands on his roof with the snowman that started it all.

Dave Ceasar stands on his roof with the snowman that started it all.

Dave Ceasar’s Christmas lights obsessions started slowly, with a larger-than-life inflatable snowman and a few strings of lights in the trees outside his Litchfield home.

“We had that snowman … and some lights in the trees, I can see the extension cords,” Ceasar said recently as he flipped through 10-year-old photographs on his phone that capture that first light display. “And we thought we were so cool.”

Those who drive by — or more likely, drive to and linger at — Dave and Shelly Ceasar’s house at 527 S. Marshall Ave. might not recognize it from the small display in 2009.

“It started getting crazy around 2013,” Dave explained with a shrug.

Crazy, as in more than 30,000 lights that dance to synchronized music, filling the neighborhood with Christmas lights and cheer — and luring carloads of curious onlookers who venture out to see the show.

“We didn’t know we were going to be the Griswolds,” Shelly said, jokingly invoking the name of everyone’s favorite over-decorator, Clark Griswold, from the movie “National Lampoon’s Christmas Vacation.”

Dave Ceasar agreed that he never considered his lights display growing to such an extent. It just sort of happened over the past decade.

The Ceasars' home is one of 10 homes competing in the Litchfield Visitors Bureau's Light Up Litchfield promotion. The homes are competing for $2,000 in prize money, but just as importantly, they are bringing visitors to town to see the lights and maybe do some shopping or dining, at least that's the goal of Light Up Litchfield, according to Litchfield Chamber of Commerce executive director Judy Hulterstrum.

The Ceasars' display has grown every year since that first effort, usually by several items. This year, Dave bought strips of LED lights with which to outline their home. Engaging his do-it-yourself spirit, he usually sees something in a YouTube video or a photograph, or reads about something in a blog, and decides to build something similar.

He admits the constant additions have become a bit of a challenge through the years. Yes, constructing them and correctly linking them to the rest of the display can be trying, but perhaps there’s something even more challenging.

“It fills my shed,” Ceasar said of all the cords, switches, controllers, hand-made light displays, and so on. “I mean, my shed — that used to be for, like, lawn toys? — no, it’s all Christmas now.

“I told my wife last year, ‘We’ve gotta get a bigger shed.’ She said, ‘We’re not getting another shed or a bigger shed.’ But I will end up winning that battle. I already know how I’m going to win it, too. She’s not going to be able to park in the garage.”

Though she kiddingly reprimands her husband about the display taking over their lives, to say nothing of their storage space, Shelly admits that she’s contributed to the expansion.

There’s a 4-foot by 4-foot lighted Christmas present just outside their front door that she suggested would be a nice addition after seeing something like it on Pinterest. Years before that, she also pushed to make Christmas tree balls out of chicken wire, which now decorate one of the trees on the south side of their home.

The decorating has become a kind of family project, the couple said, also involving their sons, Zachary, 20, and Maxwell, 17.

Maxwell especially enjoys stringing lights and other decorations in the trees that line the Ceasars’ property, because — his mother said — it’s the perfect excuse to climb trees.

But his father sees a problem ahead based on that.

Ceasars added music last year, with lights synchronized to the song, and broadcast it on a low-frequency band so cars could enjoy the show. The show has expanded to four songs this year.

And it has expanded geographically, as well, since the Ceasars “recruited” neighbors to join them in the lighting extravaganza.

Three other neighbors agreed to be linked to Dave’s wireless system, so that lights at all four homes are synchronized. Among the special attractions is a “dueling” guitar and banjo song — with lighted guitar in Ceasars’ yard and banjo in neighbor Mitch Magnuson’s yard.

Though the Ceasars have lived in the neighborhood for years, they admitted to not knowing their neighbors very well.

“I mean, I think we’re good neighbors, we say ‘hi,’ but we don’t really know them very well,” Dave said. “So my goal was, hey, let’s get them involved, get to know our neighbors a little bit. It’s neat that all of our neighbors are involved with it. Interest is spreading.”

Though they’ve seen their display steadily grow throughout the past decade, the Ceasars seem especially pleased that Light Up Litchfield will encourage other city residents to take the decorating plunge.

In their view, it’s worth it.

“We would get messages from people about how excited their kids are when they go home, because they want to go hear the song, or see Frosty,” Shelly said of their display. “We thought, ‘Oh, this really brings people some joy, so why not?’”

A team of visiting judges will choose the winners, who will receive a share of $2,000 in prizes. The People's Choice Award will be decided by a vote of the public, who can cast their vote either at https://bit.ly/2XgoKYb or at the Litchfield Chamber of Commerce office, 219 N. Sibley Ave. Voting ends Sunday, Dec. 15.

The competing homes are located at:

Winners will be announced during the Community Christmas Celebration at 5:30 p.m. Thursday, Dec. 19, in Litchfield's Central Park.

Litchfield School Board talk about making some changes to the custodial department.

As a result of two custodians retiring recently, the school district is trying to reorganize the custodial department. Superintendent Beckie Simenson said the proposed custodial changes, including adding a custodial supervisor, wouldn’t have a significant financial impact to previous job operations.

“We are kind of tweaking some positions and trying to add a supervisory position,” Business Manager Jesse Johnson said. “Financially, we’re going to be roughly in the same position we were before by changing the organization of our department.”

The School District receives money for long-term facility maintenance from the state. The funding source of about $380 per pupil unit is restricted to specific expenses, such as custodial services.

A custodial supervisor would be able to manage many of the operations that Johnson has been responsible for, such as health and safety. The position would conduct building walk-throughs, provide some support for the existing custodians and report back to Johnson, Simenson said.

“What I would like to recommend is a custodial supervisor rather than a head building custodian,” Simenson told the board. “There’s a number of reasons for that. The custodian supervisor will not be on a custodial contract, they would be an exempt employee. Also we would be able code at least 60 percent of this person’s salary to LTFM.”

If the School District adds a custodial supervisor, they could see some cost savings in the general fund in the future, Johnson said.

The School Board will consider proposed changes to the custodial operations at its Jan. 8, meeting.

While the official first day of winter is still more than a week away, winter weather conditions in Litchfield and other parts of the state decided to arrive early.

After four inches of snow arrived Monday morning in Litchfield, snow removal trucks, power brooms and rock salt were in the business of keeping the streets safe for drivers and pedestrians. It was the second snow event of the season to which the city of Litchfield’s crew had mobilized.

Mario Provencher, an operations coordinator for the city, said his crew uses a mixture of crushed rock salt and washed sand to mitigate icy roads. The yearly budget for the salt is about $14,000, he said.

“But if it gets extremely cold, neither works very well,” Provencher said a few weeks ago in an email. “If it gets icy out, I can add more salt — if need be — to a load of sand in the plow truck.”

With a 50 percent chance of snow beginning Wednesday night and scattered flurries through the week, the city’s crew could get a workout.

And as winter snowfall becomes more frequent, it’s important for drivers to remember city winter parking rules. City ordinance 72.15 states that no motor vehicle should park obstructing traffic on any street, avenue or alley — interfering with snow removal in the event of one inch of snowfall or more. Violations could result in a $50 fine for the first offense, a $100 fine or more for additional offenses.

“This is the first day of plowing,” he said Nov. 13 after the first snowfall of the season. “The second day, I bring in four more people to help haul all the snow in our big trucks. So on average — depending on the amount of snow — anywhere from nine to 13 people are involved, which usually is a two to a three-day event — plow then haul and clean up afterward.”

Provencher’s crew hauls the snow to several locations around Litchfield, primarily to Litchfield wastewater facility and by a big field at the north end of Litchfield Municipal Airport.

During heavy snowfall and before heavy traffic, Provencher and his team typically begin plowing operations from 6 to 7 a.m., and then get off the road, fuel equipment during commuting hours, Provencher said.

“We have goals to get roads done first,” he said, “then parking lots, alleys, and then the airport, and clean the outdoor rinks last. Everyone wants their road done first but that just can’t happen.” 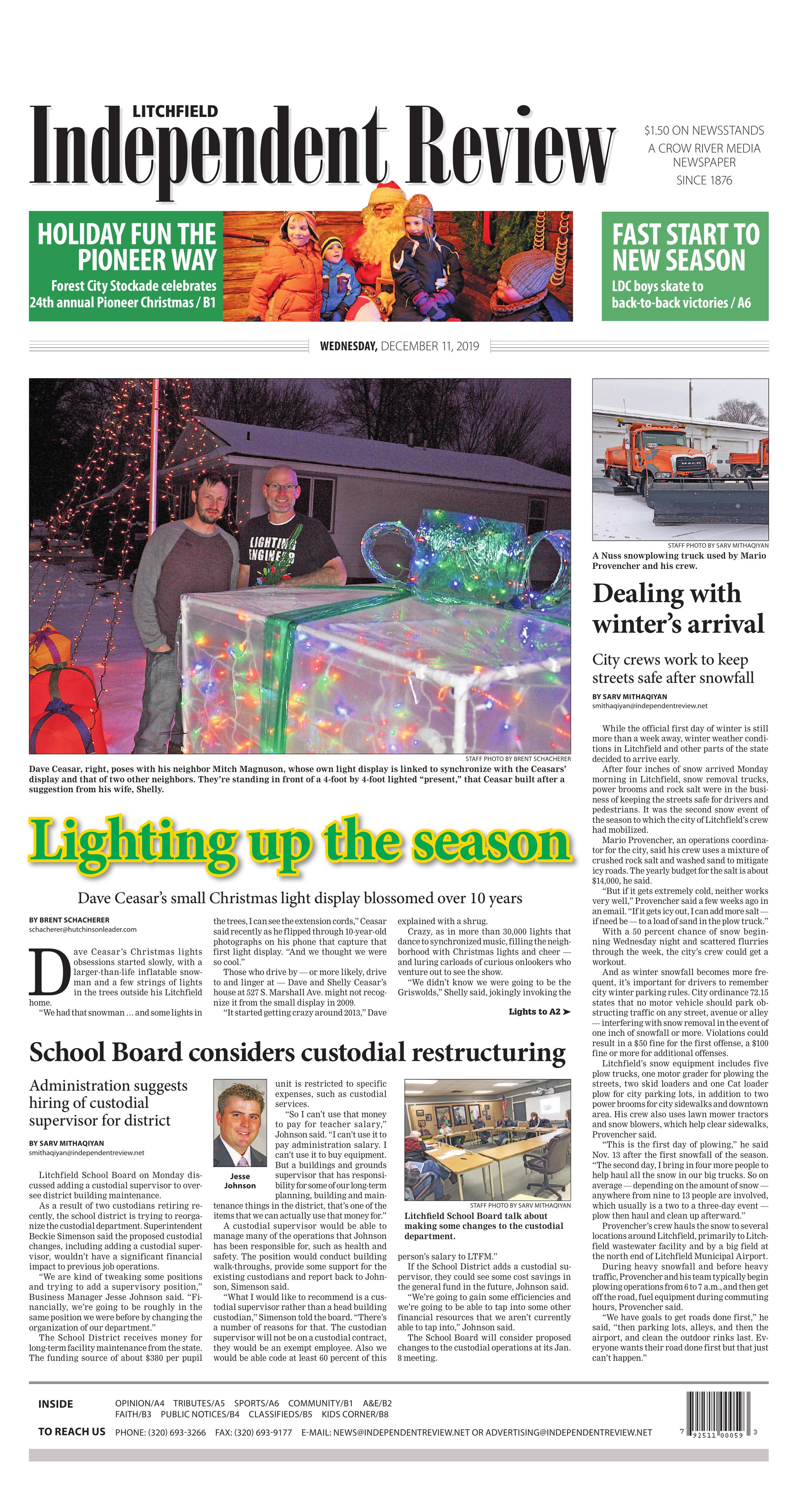