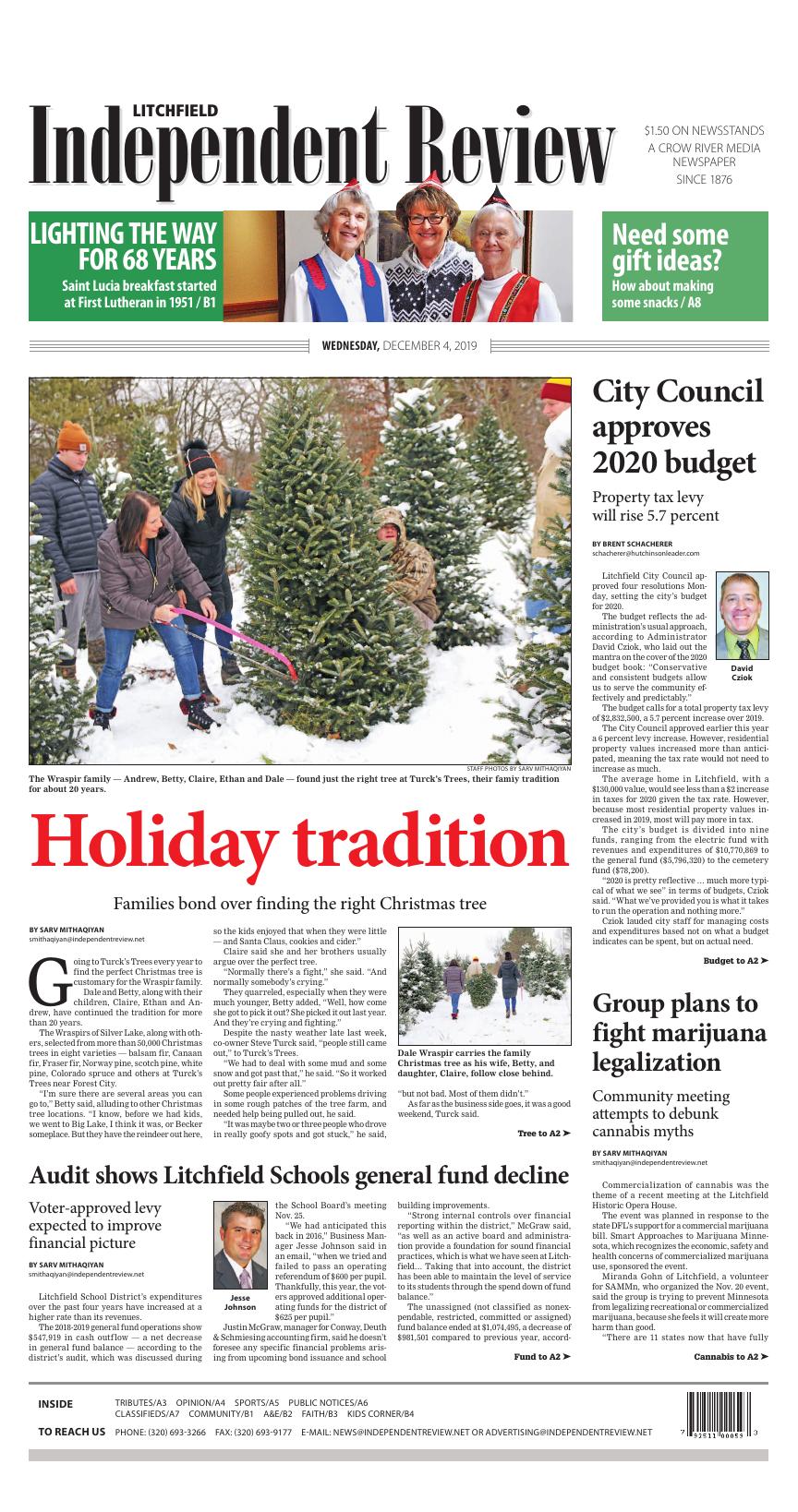 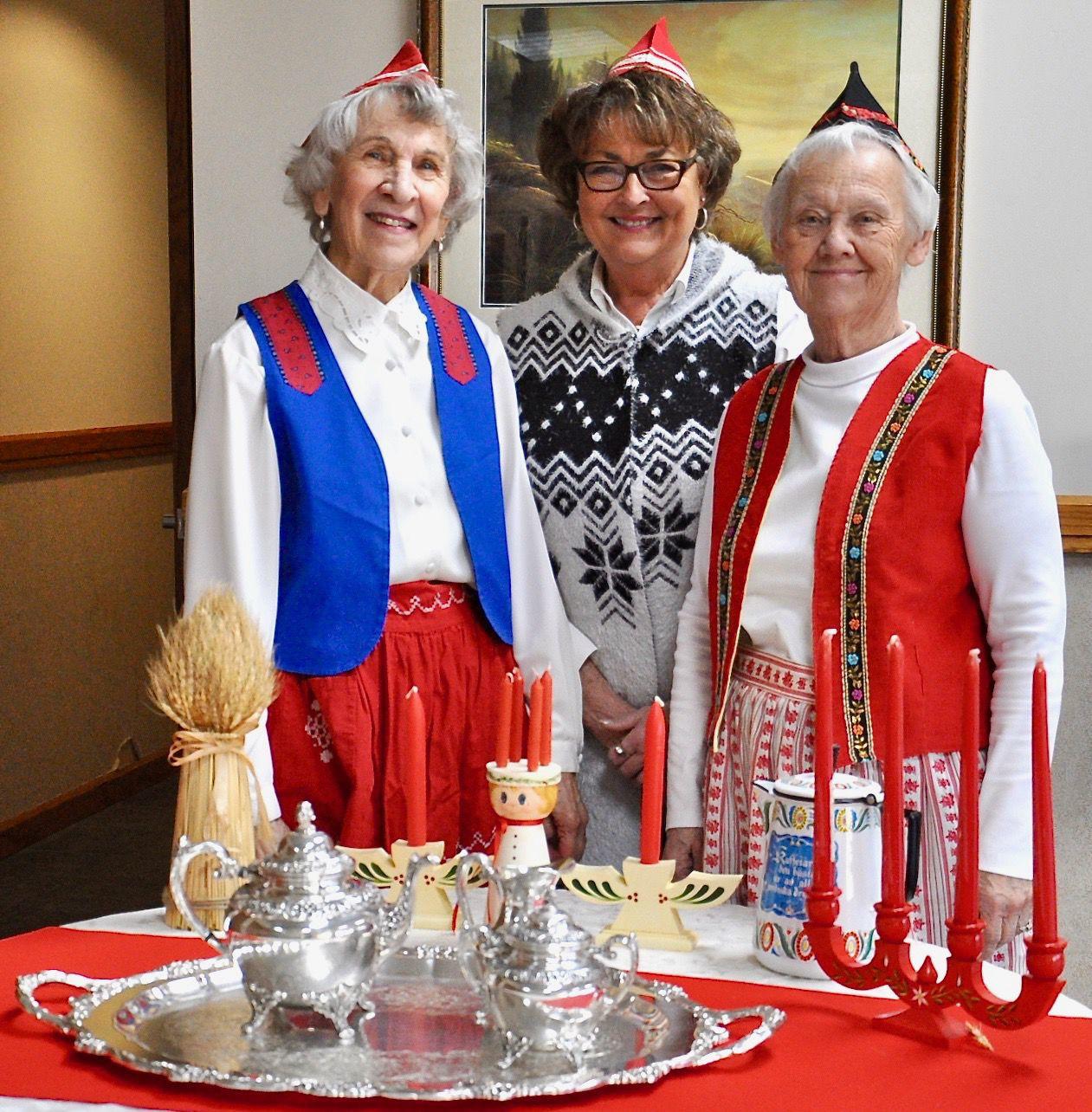 Going to Turck’s Trees every year to find the perfect Christmas tree is customary for the Wraspir family of Silver Lake. Dale and Betty, along with their children, Claire, Ethan and Andrew, have continued the tradition for more than 20 years.

The Wraspirs, along with others, selected from more than 50,000 Christmas trees in eight varieties at the Christmas tree farm near Forest City.

“I’m sure there are several areas you can go to,” Betty said, alluding to other Christmas tree locations. “I know, before we had kids, we went to Big Lake, I think it was, or Becker someplace. But they have the reindeer out here, so the kids enjoyed that when they were little — and Santa Claus, cookies and cider."

Claire said she and her brothers usually argue over the perfect tree.

“Normally there’s a fight,” she said. “And normally somebody’s crying.”

They quarreled, especially when they were much younger, Betty added, “Well, how come she got to pick it out? She picked it out last year. And they’re crying and fighting."

“We had to deal with some mud and some snow and got past that,” he said. “So it worked out pretty fair after all.”

Some people experienced problems driving in some rough patches of the tree farm, and needed help being pulled out, he said.

“It was maybe two or three people who drove in really goofy spots and got stuck,” he said, “but not bad. Most of them didn’t.”

As far as the business side goes, it was a good weekend, Turck said.

“We’re just thinking of next weekend,” he added. “The weather is probably going to be better, and the sun’s going to be shining, so it will probably be busy again.”

Christmas tree hunting at the Turck’s Trees will be going on until Dec. 15, after which there will be self-serve trees set up on a hayrack for people to pick up, Turck said. “Usually there aren’t that many customers after that weekend who come.”

The turnout at Turck’s Trees is pretty consistent each year with few exceptions, Turck said.

“Pretty much the same number,” he said. “It varies a little bit. Some years are up, some are down. It might be a little different this year because of Thanksgiving (being) later. So it might be a little less with the snow, but pretty close to the same.”

After finding their perfect tree and chipping it off its stump, the Wraspirs had it  shaken and tied before securing it to the roof of their vehicle for the drive home.

They hoped to put up the tree, let the branches settle and begin decorating soon, Betty said.

Litchfield School Board and administrators discuss the district’s audit report for 2018-2019 school year and 2019-2020 projections.

Litchfield School District’s expenditures over the past four years have increased at a higher rate than its revenues.

The 2018-2019 general fund operations show $547,919 in cash outflow — a net decrease in general fund balance — according to the district's audit, which was discussed during the School Board's meeting Nov. 25.

“We had anticipated this back in 2016,” Business Manager Jesse Johnson said in an email, “when we tried and failed to pass an operating referendum of $600 per pupil. Thankfully, this year, the voters approved additional operating funds for the district of $625 per pupil.”

“Strong internal controls over financial reporting within the district,” McGraw said, “as well as an active board and administration provide a foundation for sound financial practices, which is what we have seen at Litchfield… Taking that into account, the district has been able to maintain the level of service to its students through the spend down of fund balance.”

The unassigned (not classified as nonexpendable, restricted, committed or assigned) fund balance ended at $1,074,495, a decrease of $981,501 compared to previous year, according to Johnson’s Nov. 25 memo about the audit.

This year’s budgeted revenues were $17,829,416 compared to actual revenues of $17,875,107, not including Teachers Retirement Association pension plan. Factors that contributed to the decrease in budget revenues include:

Budgeted expenditures were $18,321,333 compared to actual expenditures of $18,423,026 excluding TRA pass through. Factors contributing to the decrease in expenditures include:

The additional funding of around $1 million, “will alleviate most of the pressure put on the general fund balance in the short-term,” Johnson said. Budget expenditures for 2019-2020 are expected to exceed revenues by $759,000.

“So we still have some work to do to stabilize the general fund balance over the long-term,” Johnson added.

The budget reflects the administration’s usual approach, according to Administrator David Cziok, who laid out the mantra on the cover of the 2020 budget book: “Conservative and consistent budgets allow us to serve the community effectively and predictably.”

The City Council approved earlier this year a 6 percent levy increase. However, residential property values increased more than anticipated, meaning the tax rate would not need to increase as much.

The average home in Litchfield, with a $130,000 value, would see less than a $2 increase in taxes for 2020 given the tax rate. However, because most residential property values increased in 2019, most will pay more in tax.

“2020 is pretty reflective … much more typical of what we see” in terms of budgets, Cziok said. “What we’ve provided you is what it takes to run the operation and nothing more.”

Cziok lauded city staff for managing costs and expenditures based not on what a budget indicates can be spent, but on actual need.

Fund balances are expected to grow somewhat in 2020 as revenue collection increases more than expenditures, and contingencies are included in each fund.

Cziok also briefly reviewed some of the intricacies of the budget, which he said included more than 1,000 lines of items.

“There’s a lot of stuff going on here,” Cziok said.

Among the “stuff” is a line item for snow removal at $46,000 that doesn’t include human resources costs but does include the costs of sand, salt, maintenance and some equipment, with a cost-per-resident of $4.26, he said.

Wages will rise 2.5 percent in 2020 — the largest impact to most of the city’s operational budgets — and health care costs are budgeted to fall slightly, Cziok said.

Miranda Gohn of Litchfield, a volunteer for SAMMn, who organized the Nov. 20 event, said the group is trying to prevent Minnesota from legalizing recreational or commercialized marijuana, because she feels it will create more harm than good.

Two guest speakers, Judson Bemis and Dr. Ken Winters provided an overview of the health and social implications of commercial cannabis by reviewing the science and trends of other states that legalized marijuana. Bemis is the chair for SAMMn, and Winters is a senior scientist at Oregon Research Institute in Minnesota and an adjunct faculty member in the Department of Psychology at University of Minnesota.

During the event, Bemis and Dr. Winters debunked 10 pro-Marijuana arguments, including:

“The problem is, now they’re starting to see with that (higher THC) potency, mental illness, higher frequency of psychosis — it increases the risk,” Gohn added. “What makes this (issue) insidious is within the pot-drug culture, and also, it’s promoted by the industry that it’s harmless, it’s good for you, it’ll cure every ailment known to humans. That makes it even more difficult.”

The correlation between cannabis use and psychosis isn’t conclusive, According to a 2019 study in National Institutes of Health by Marco Leyton, a professor in the department of psychiatry at McGill University.

If commercial cannabis is legalized in Minnesota, taxes are going to go up, Gohn said.

“Just so a small number of people could get legally high,” she added, “and some of them are addicts. And then, you got a very small population that are going to make a lot of money on, and the rest of us are going to end up paying for this.” 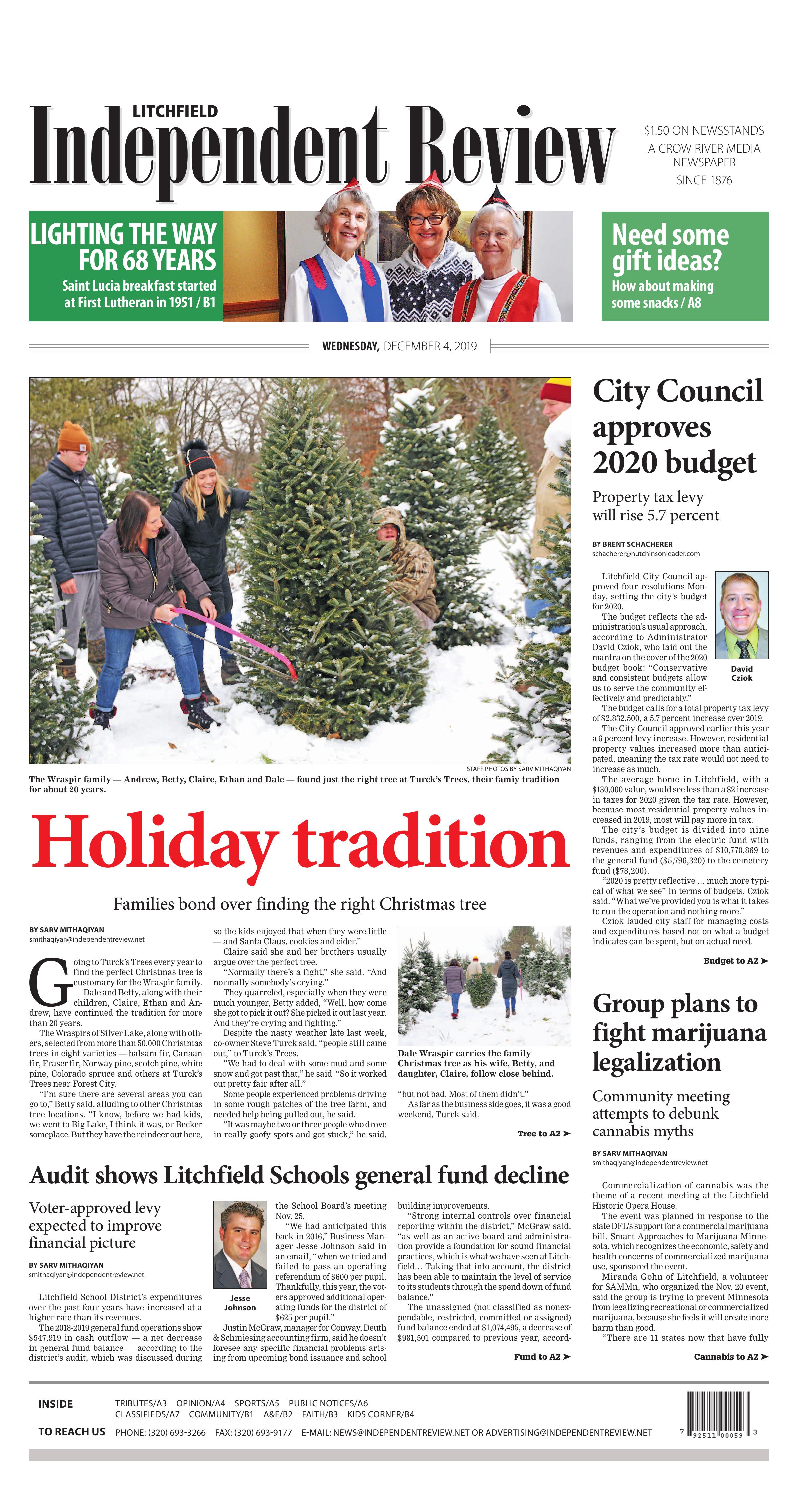