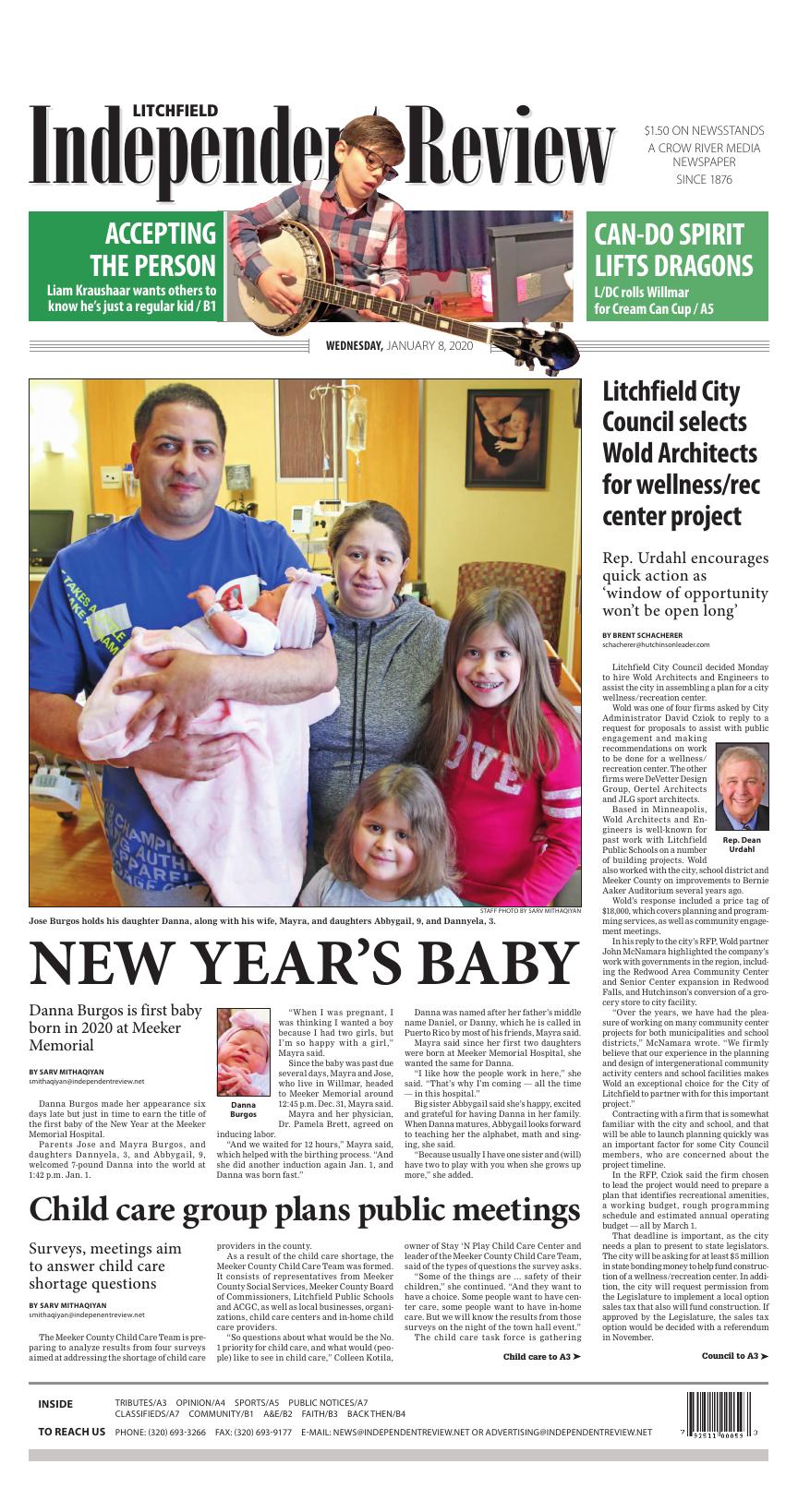 Jose Burgos holds his daughter Danna, along with his wife, Mayra, and daughters Abbygail, 9, and Dannyela, 3.

Danna Burgos earned the title of first baby of the New Year when she was born at 1:42 p.m. Jan. 1 at the Meeker Memorial Hospital.

Danna Burgos made her appearance six days late but just in time to earn the title of the first baby of the New Year at the Meeker Memorial Hospital.

“When I was pregnant, I was thinking I wanted a boy because I had two girls, but I’m so happy with a girl,” Mayra said.

Since the baby was past due several days, Mayra and Jose, who live in Willmar, headed to Meeker Memorial around 12:45 p.m. Dec. 31, Mayra said.

“And we waited for 12 hours,” Mayra said, which helped with the birthing process. “And she did another induction again Jan. 1, and Danna was born fast.”

Danna was named after her father’s middle name Daniel, or Danny, which he is called in Puerto Rico by most of his friends, Mayra said.

Mayra said since her first two daughters were born at Meeker Memorial Hospital, she wanted the same for Danna.

Big sister Abbygail said she’s happy, excited and grateful for having Danna in her family. When Danna matures, Abbygail looks forward to teaching her the alphabet, math and singing, she said.

“Because usually I have one sister and (will) have two to play with you when she grows up more,” she added.

The Meeker County Child Care Team is preparing to analyze results from four surveys aimed at addressing the shortage of child care providers in the county.

As a result of the child care shortage, the Meeker County Child Care Team was formed. It consists of representatives from Meeker County Social Services, Meeker County Board of Commissioners, Litchfield Public Schools and ACGC, as well as local businesses, organizations, child care centers and in-home child care providers.

“So questions about what would be the No. 1 priority for child care, and what would (people) like to see in child care,” Colleen Kotila, owner of Stay ‘N Play Child Care Center and leader of the Meeker County Child Care Team, said of the types of questions the survey asks.

The child care task force is gathering information about child care needs via four surveys that can be accessed using the following links:

“We’re trying to get the surveys out to as many people as possible,” Kotila said.

“To appreciate the providers,” Kotila said, “(to) thank all the wonderful providers who care for the children in our Meeker County area. At this particular event, they’re also going to look for feedback to better inform the community about the issues and possible solutions for supporting providers and inviting new providers to join the field.”

The second is a town hall meeting 6-8 p.m. Jan. 30 at Litchfield's Zion Lutheran Church where Meeker County residents are invited to study the survey results and brainstorm the next steps and solutions to the issue.

“Think about some fresh ideas,” Kotila said, noting that members who plan to join the town hall meeting come prepared with ideas. “What can we do to support child care in our community, what are some ideas to add child care to our communities? They’ll have an opportunity to see the results of the surveys and I think that will give us also some things to think about. We want to have a good discussion about ideas and solutions. We want people to come with that type of feedback.”

Meeker County residents are invited to register for the upcoming child care town hall meeting, which is aimed at bringing everyone together to discuss survey results and brainstorm next steps and solutions to the issue.

Litchfield City Council decided Monday to hire Wold Architects and Engineers to assist the city in assembling a plan for a city wellness/recreation center.

Wold was one of four firms asked by City Administrator David Cziok to reply to a request for proposals to assist with public engagement and making recommendations on work to be done for a wellness/recreation center. The other firms were DeVetter Design Group, Oertel Architects and JLG sport architects.

Based in Minneapolis, Wold Architects and Engineers is well-known for past work with Litchfield Public Schools on a number of building projects. Wold also worked with the city, school district and Meeker County on improvements to Bernie Aaker Auditorium several years ago.

Wold’s response included a price tag of $18,000, which covers planning and programming services, as well as community engagement meetings.

In his reply to the city’s RFP, Wold partner John McNamara highlighted the company’s work with governments in the region, including the Redwood Area Community Center and Senior Center expansion in Redwood Falls, and Hutchinson’s conversion of a grocery store to city facility.

“Over the years, we have had the pleasure of working on many community center projects for both municipalities and school districts,” McNamara wrote. “We firmly believe that our experience in the planning and design of intergenerational community activity centers and school facilities makes Wold an exceptional choice for the City of Litchfield to partner with for this important project.”

Contracting with a firm that is somewhat familiar with the city and school, and that will be able to launch planning quickly was an important factor for some City Council members, who are concerned about the project timeline.

In the RFP, Cziok said the firm chosen to lead the project would need to prepare a plan that identifies recreational amenities, a working budget, rough programming schedule and estimated annual operating budget — all by March 1.

That deadline is important, as the city needs a plan to present to state legislators. The city will be asking for at least $5 million in state bonding money to help fund construction of a wellness/recreation center. In addition, the city will request permission from the Legislature to implement a local option sales tax that also will fund construction. If approved by the Legislature, the sales tax option would be decided with a referendum in November.

The legislative session begins Feb. 11, and state Rep. Dean Urdahl, who attended Monday’s meeting, encouraged the city to continue its work, adding greater detail to its plan and to consider adding more of its own funds.

“Even though I will make suggestions … this is your deal,” said Urdahl, who is the Republican lead on the House Capital Investment Committee. “If you’re going to do it, I’m telling you how I think it can be done, at least procedurally, in the Legislature.”

Urdahl said the city has “a unique window of opportunity” with its requests for state participation in the wellness/recreation center, because of his position in the House and Sen. Scott Newman’s seat as vice chairman of the Capital Investment Committee in the Senate.

He said the city might consider asking for $6 million — up from $5 million — in state bonding funds, and also increase its own contributions to the center by $1 million.

“Time is an important factor” in the city’s proposal, Urdahl said. “The window of opportunity won’t be open long.” 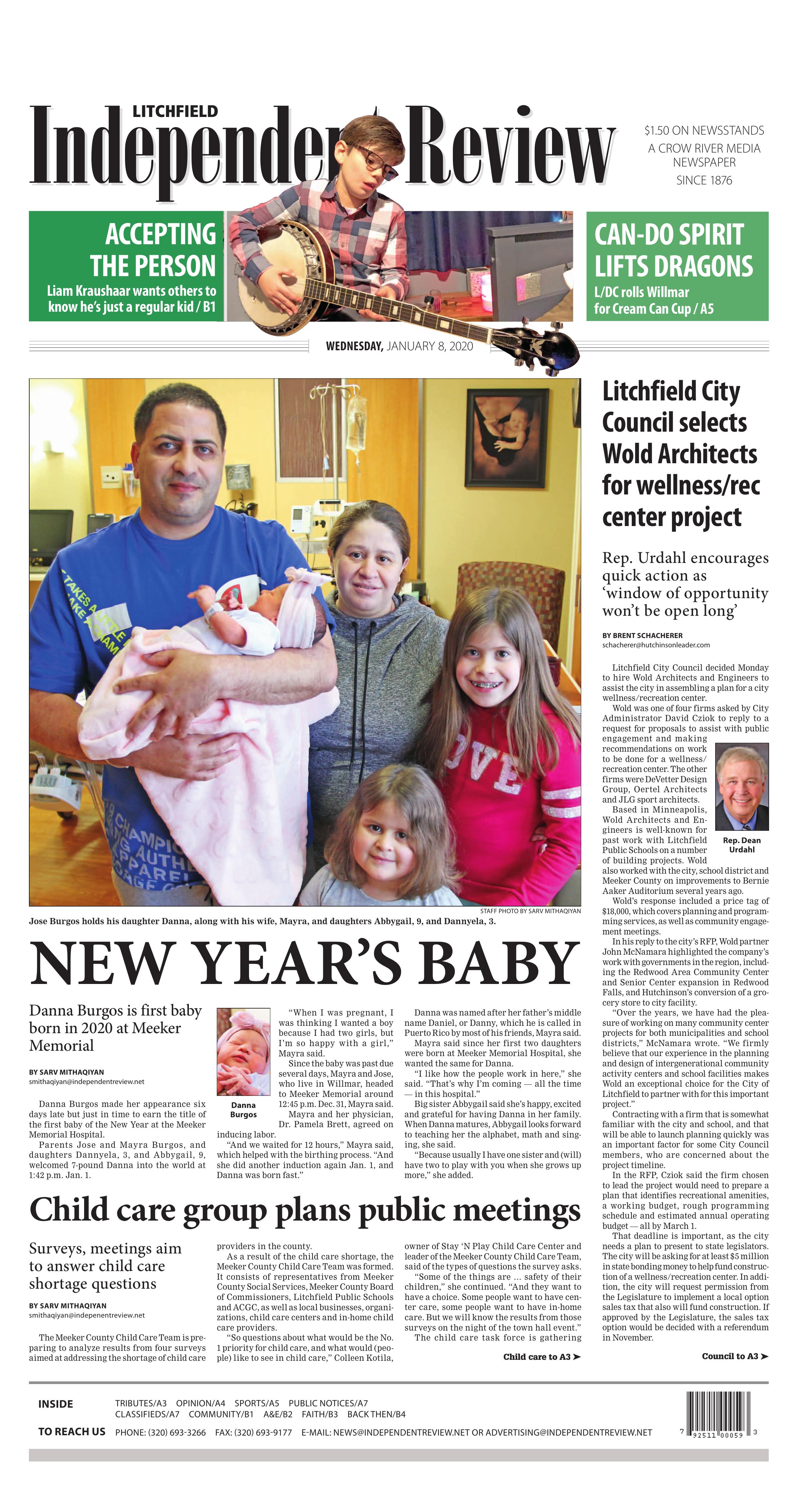