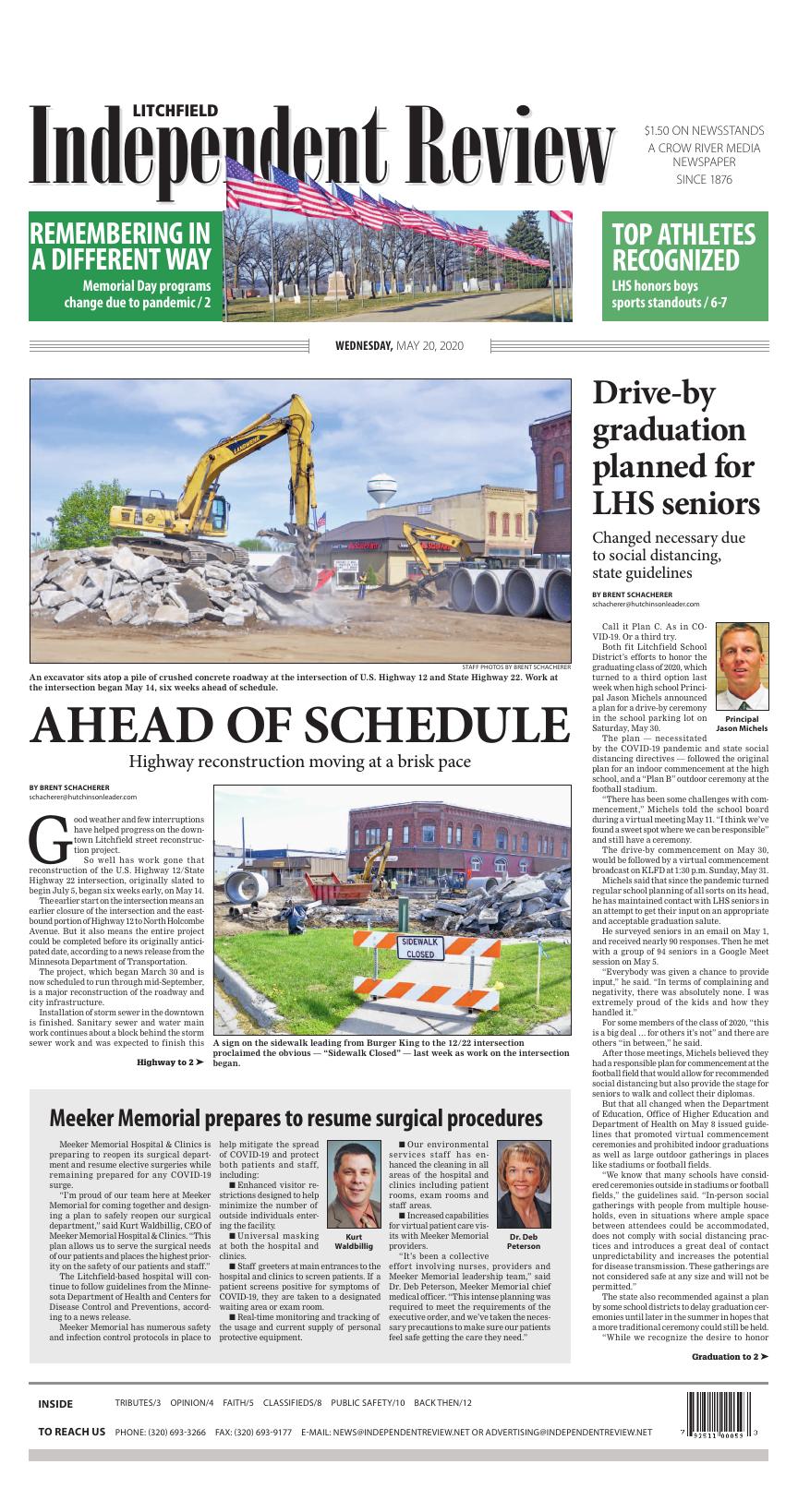 The 50 American flags on the Avenue of Flags at Lake Ripley Cemetery in Litchfield have been the subject of many photographs. It’s hard to beat the image of the red, white and blue flying against a bright blue sky.

So well has work gone that reconstruction of the U.S. Highway 12/State Highway 22 intersection, originally slated to begin July 5, began six weeks early, on May 14.

The earlier start on the intersection means an earlier closure of the intersection and the east-bound portion of Highway 12 to North Holcombe Avenue. But it also means the entire project could be completed before its originally anticipated date, according to a news release from the Minnesota Department of Transportation.

The project, which began March 30 and is now scheduled to run through mid-September, is a major reconstruction of the roadway and city infrastructure.

Installation of storm sewer in the downtown is finished. Sanitary sewer and water main work continues about a block behind the storm sewer work and was expected to finish this past week. Grading of the new road from Fourth Street to the intersection of Highway 12 and Highway 22 is scheduled to start later this week. The goal of contractor Landwehr Construction is to start paving by the first week of June.

Closing the intersection and starting work early is expected to allow completion of the project by Sept. 19.

The reconstruction of Highway 12 from Fourth Street to the 12/22 intersection is in its second year. Fourth Street from Highway 12 west to the outlet at Jewett Creek was reconstructed in 2019 and a pond was constructed to improve drainage. The City of Litchfield is updating sanitary sewer and water in downtown as part of the 2020 project.

Other aspects of the project include:

Benefits of the project include a smoother road surface, modernized sanitary sewer and water and improved drainage, according to Minnesota Department of Transportation. The project helps to ensure that the city and state infrastructure continues to serve their purposes for many years, MnDOT said in a news release.

For more information on the project, please visit the project webpage at www.mndot.gov/d8/projects/hwy12litchfield.

Meeker Memorial Hospital's screening and triage trailer sits at the main entrance to the hospital as staff prepare for a surge of COVID-19 related patients.

Meeker Memorial Hospital & Clinics is preparing to reopen its surgical department and resume elective surgeries while remaining prepared for any COVID-19 surge.

The Litchfield-based hospital will continue to follow guidelines from the Minnesota Department of Health and Centers for Disease Control and Preventions, according to a news release.

Meeker Memorial has numerous safety and infection control protocols in place to help mitigate the spread of COVID-19 and protect both patients and staff, including:

“It’s been a collective effort involving nurses, providers and Meeker Memorial leadership team,” said Dr. Deb Peterson, Meeker Memorial chief medical officer. “This intense planning was required to meet the requirements of the executive order, and we’ve taken the necessary precautions to make sure our patients feel safe getting the care they need.”

Both fit Litchfield School District’s efforts to honor the graduating class of 2020, which turned to a third option last week when high school Principal Jason Michels announced a plan for a drive-by ceremony in the school parking lot on Saturday, May 30.

The plan — necessitated by the COVID-19 pandemic and state social distancing directives — followed the original plan for an indoor commencement at the high school, and a “Plan B” outdoor ceremony at the football stadium.

“There has been some challenges with commencement,” Michels told the school board during a virtual meeting May 11. “I think we’ve found a sweet spot where we can be responsible” and still have a ceremony.

The drive-by commencement on May 30, would be followed by a virtual commencement broadcast on KLFD at 1:30 p.m. Sunday, May 31.

Michels said that since the pandemic turned regular school planning of all sorts on its head, he has maintained contact with LHS seniors in an attempt to get their input on an appropriate and acceptable graduation salute.

He surveyed seniors in an email on May 1, and received nearly 90 responses. Then he met with a group of 94 seniors in a Google Meet session on May 5.

“Everybody was given a chance to provide input,” he said. “In terms of complaining and negativity, there was absolutely none. I was extremely proud of the kids and how they handled it.”

After those meetings, Michels believed they had a responsible plan for commencement at the football field that would allow for recommended social distancing but also provide the stage for seniors to walk and collect their diplomas.

But that all changed when the Department of Education, Office of Higher Education and Department of Health on May 8 issued guidelines that promoted virtual commencement ceremonies and prohibited indoor graduations as well as large outdoor gatherings in places like stadiums or football fields.

“We know that many schools have considered ceremonies outside in stadiums or football fields,” the guidelines said. “In-person social gatherings with people from multiple households, even in situations where ample space between attendees could be accommodated, does not comply with social distancing practices and introduces a great deal of contact unpredictability and increases the potential for disease transmission. These gatherings are not considered safe at any size and will not be permitted.”

The state also recommended against a plan by some school districts to delay graduation ceremonies until later in the summer in hopes that a more traditional ceremony could still be held.

“While we recognize the desire to honor this rite-of-passage in the more traditional way, we cannot offer a timeline for when public health guidance will be changed to accommodate large gatherings,” the agencies’ guidance said.

Given that, Michels said, it was necessary to “tweak” his Plan B, and move commencement to the high school parking lot – a permitted venue.

The plan would have seniors arrive in vehicles with parents at staggered times at the main entrance to the high school, where they would receive their diploma and have an opportunity for a photo in front of the school entrance. They also would receive graduation gifts.

Once that portion was complete, Michels said, a caravan of graduates and families would be escorted by police in a parade through town.

Michels said that once plans are finalized, the district would contact parents via usual communication channels to explain. 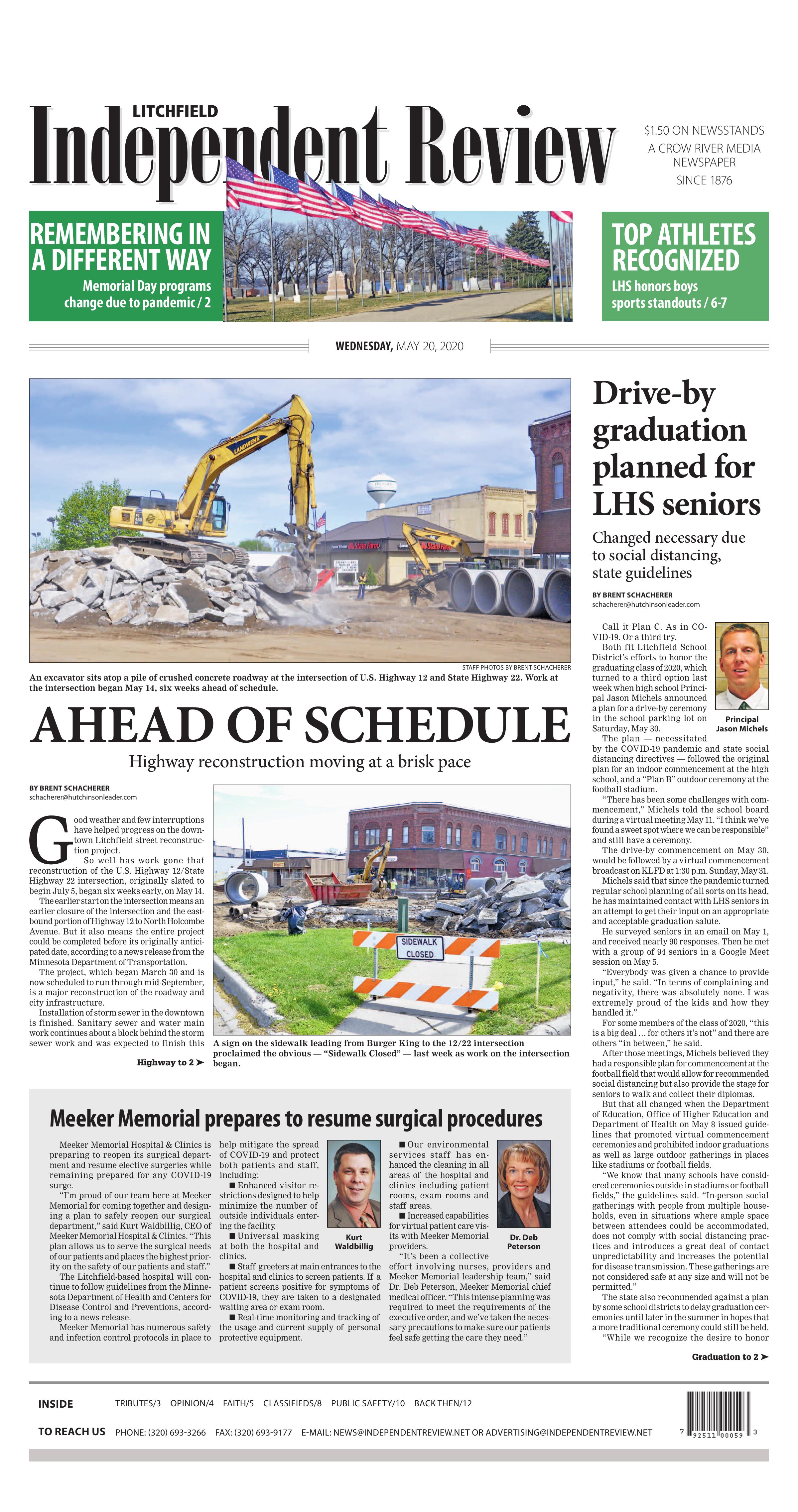