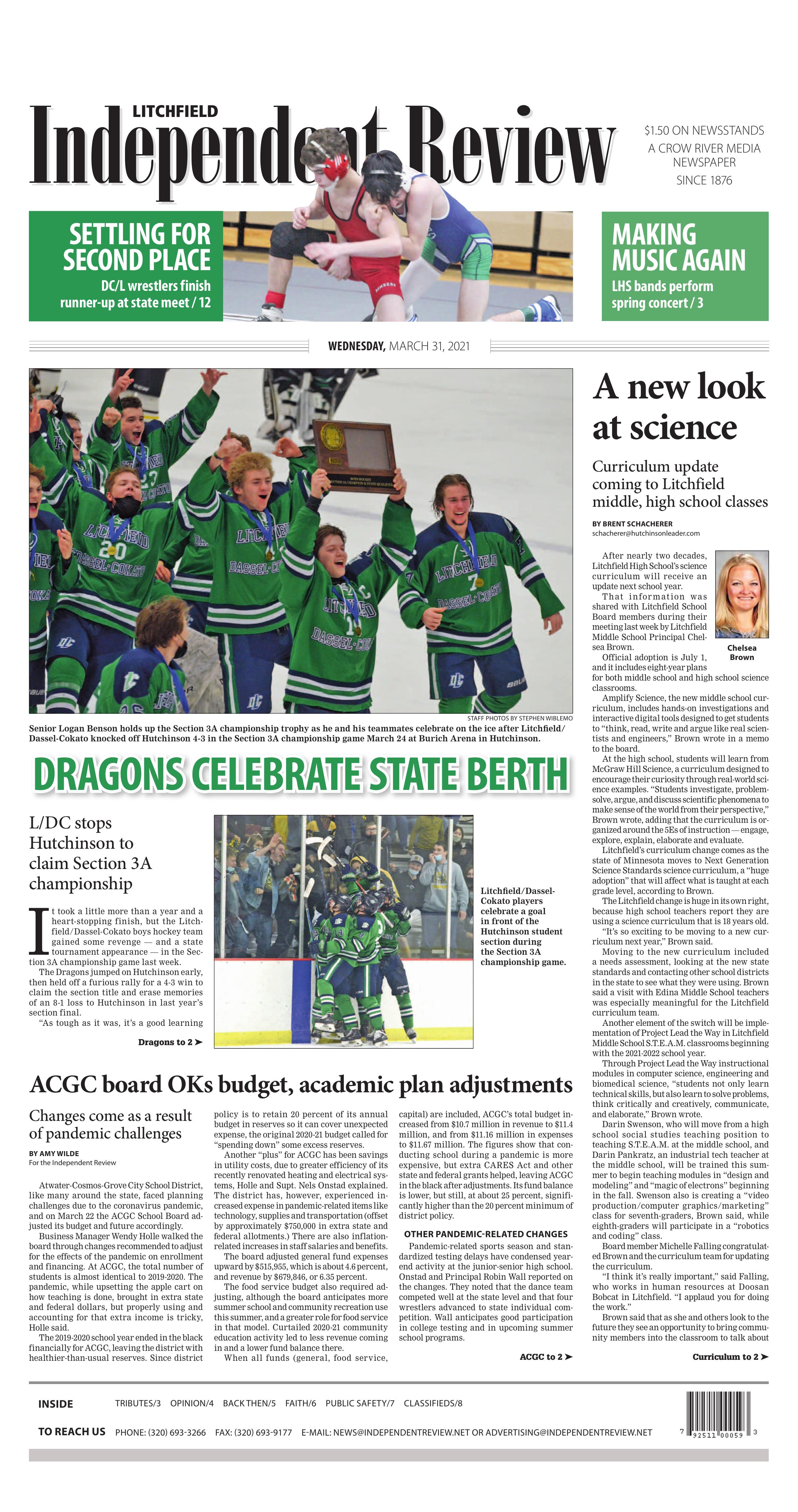 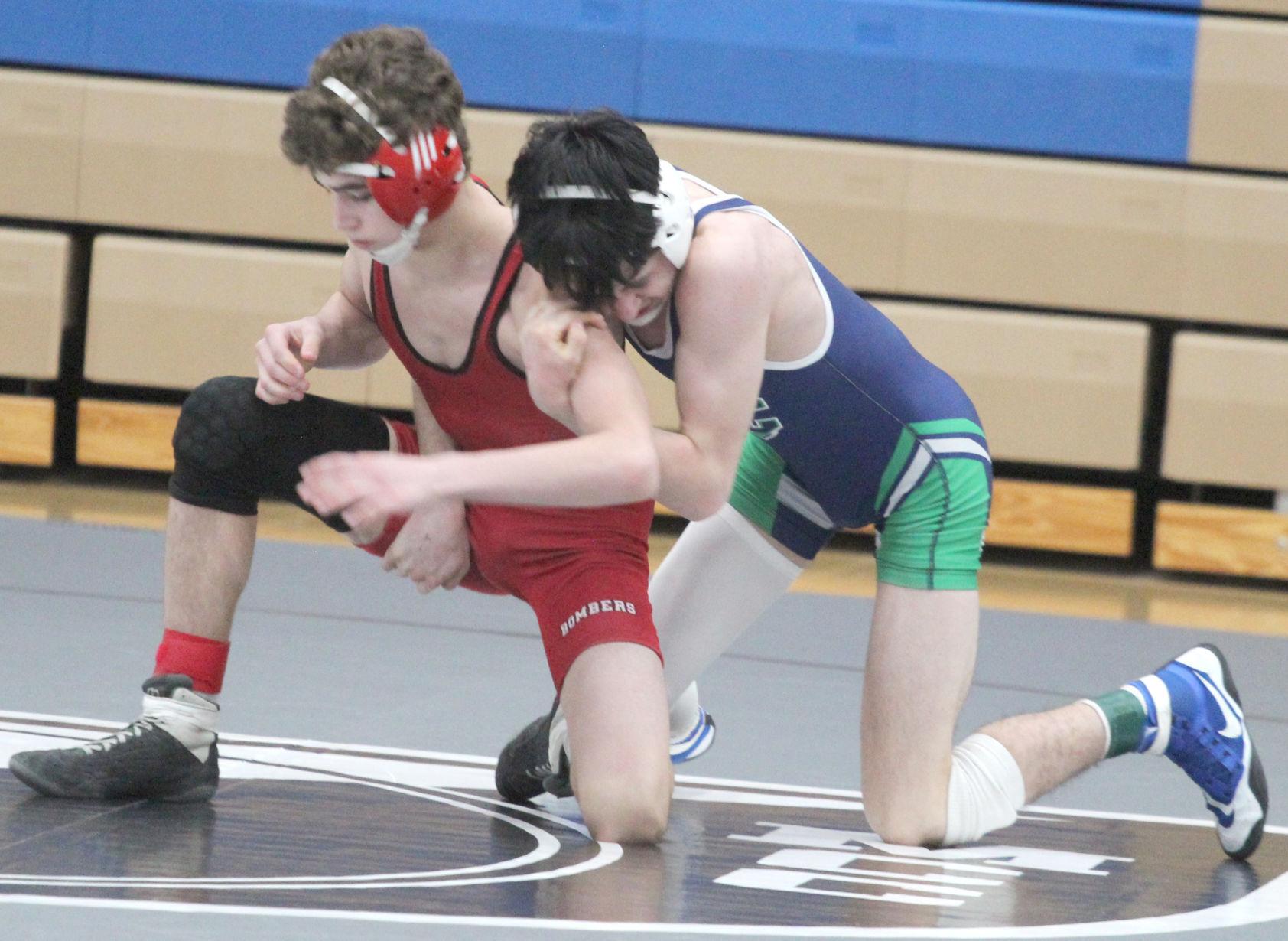 It took a little more than a year and a heart-stopping finish, but the Litchfield/Dassel-Cokato boys hockey team gained some revenge — and a state tournament appearance — in the Section 3A championship game last week.

The Dragons jumped on Hutchinson early, then held off a furious rally for a 4-3 win to claim the section title and erase memories of an 8-1 loss to Hutchinson in last year’s section final.

“As tough as it was, it’s a good learning experience,” LDC coach Brice Berggren said of last year’s loss. “To be in that position, get a taste of it, now hopefully we taste the other side, and we were fortunate enough tonight to do that.”

The win put the Dragons in the state tournament for the third time in six seasons, where they were scheduled to play East Grand Forks in the quarterfinals Tuesday afternoon at Xcel Energy Center, after this edition of the Independent Review went to press.

For information about the Dragons’ state tournament game, check out online coverage at www.independentreview.net.

Atwater-Cosmos-Grove City School District, like many around the state, faced planning challenges due to the coronavirus pandemic, and on March 22 the ACGC School Board adjusted its budget and future accordingly.

Business Manager Wendy Holle walked the board through changes recommended to adjust for the effects of the pandemic on enrollment and financing. At ACGC, the total number of students is almost identical to 2019-2020. The pandemic, while upsetting the apple cart on how teaching is done, brought in extra state and federal dollars, but properly using and accounting for that extra income is tricky, Holle said.

The 2019-2020 school year ended in the black financially for ACGC, leaving the district with healthier-than-usual reserves. Since district policy is to retain 20 percent of its annual budget in reserves so it can cover unexpected expense, the original 2020-21 budget called for “spending down” some excess reserves.

Another “plus” for ACGC has been savings in utility costs, due to greater efficiency of its recently renovated heating and electrical systems, Holle and Supt. Nels Onstad explained. The district has, however, experienced increased expense in pandemic-related items like technology, supplies and transportation (offset by approximately $750,000 in extra state and federal allotments.) There are also inflation-related increases in staff salaries and benefits.

The food service budget also required adjusting, although the board anticipates more summer school and community recreation use this summer, and a greater role for food service in that model. Curtailed 2020-21 community education activity led to less revenue coming in and a lower fund balance there.

When all funds (general, food service, capital) are included, ACGC’s total budget increased from $10.7 million in revenue to $11.4 million, and from $11.16 million in expenses to $11.67 million. The figures show that conducting school during a pandemic is more expensive, but extra CARES Act and other state and federal grants helped, leaving ACGC in the black after adjustments. Its fund balance is lower, but still, at about 25 percent, significantly higher than the 20 percent minimum of district policy.

Pandemic-related sports season and standardized testing delays have condensed year-end activity at the junior-senior high school. Onstad and Principal Robin Wall reported on the changes. They noted that the dance team competed well at the state level and that four wrestlers advanced to state individual competition. Wall anticipates good participation in college testing and in upcoming summer school programs.

“The overall testing schedule is different this year; we are doing it a little later, largely in May,” Wall said, noting that students still in distance learning are encouraged to participate in the testing. She said that a prom, baccalaureate and graduation ceremonies will also be held in May, using state health department guidelines. Details are still pending.

Things are operating more normally at the elementary school, Onstad reported. As of the March 22 board meeting, students had been back in class for a couple of months there, and for five weeks at the high school.

There is extra funding for summer school: a great deal of interest has already been expressed, officials reported. All summer school activities at all grade levels will take place in Atwater. The summer school day will include two meals, and be coordinated with summer recreation offerings and transportation this year.

Summer food service will be available for pickup by families in all three ACGC communities, probably once a week.

That information was shared with Litchfield School Board members during their meeting last week by Litchfield Middle School Principal Chelsea Brown.

Official adoption is July 1, and it includes eight-year plans for both middle school and high school science classrooms.

Amplify Science, the new middle school curriculum, includes hands-on investigations and interactive digital tools designed to get students to “think, read, write and argue like real scientists and engineers,” Brown wrote in a memo to the board.

At the high school, students will learn from McGraw Hill Science, a curriculum designed to encourage their curiosity through real-world science examples. “Students investigate, problem-solve, argue, and discuss scientific phenomena to make sense of the world from their perspective,” Brown wrote, adding that the curriculum is organized around the 5Es of instruction — engage, explore, explain, elaborate and evaluate.

Litchfield’s curriculum change comes as the state of Minnesota moves to Next Generation Science Standards science curriculum, a “huge adoption” that will affect what is taught at each grade level, according to Brown.

The Litchfield change is huge in its own right, because high school teachers report they are using a science curriculum that is 18 years old.

“It’s so exciting to be moving to a new curriculum next year,” Brown said.

Moving to the new curriculum included a needs assessment, looking at the new state standards and contacting other school districts in the state to see what they were using. Brown said a visit with Edina Middle School teachers was especially meaningful for the Litchfield curriculum team.

Another element of the switch will be implementation of Project Lead the Way in Litchfield Middle School S.T.E.A.M. classrooms beginning with the 2021-2022 school year.

Darin Swenson, who will move from a high school social studies teaching position to teaching S.T.E.A.M. at the middle school, and Darin Pankratz, an industrial tech teacher at the middle school, will be trained this summer to begin teaching modules in “design and modeling” and “magic of electrons” beginning in the fall. Swenson also is creating a “video production/computer graphics/marketing” class for seventh-graders, Brown said, while eighth-graders will participate in a “robotics and coding” class.

“I think it’s really important,” said Falling, who works in human resources at Doosan Bobcat in Litchfield. “I applaud you for doing the work.”

Brown said that as she and others look to the future they see an opportunity to bring community members into the classroom to talk about real-world uses of science and technology in their jobs.

Board member Greg Mathews, a former LHS history teacher, asked whether an 18-year gap between curriculum updates was longer than it should be.

Brown agreed that it was, adding that teachers have done what they can, “pulling in different resources, buying materials” to keep their instruction current, “but there has not been a set curriculum to teach out of.”

“It’s exciting, because 18 years is way too long,” Brown said of the curriculum change. She added that it’s a goal to now review curriculum in all different areas every six years.