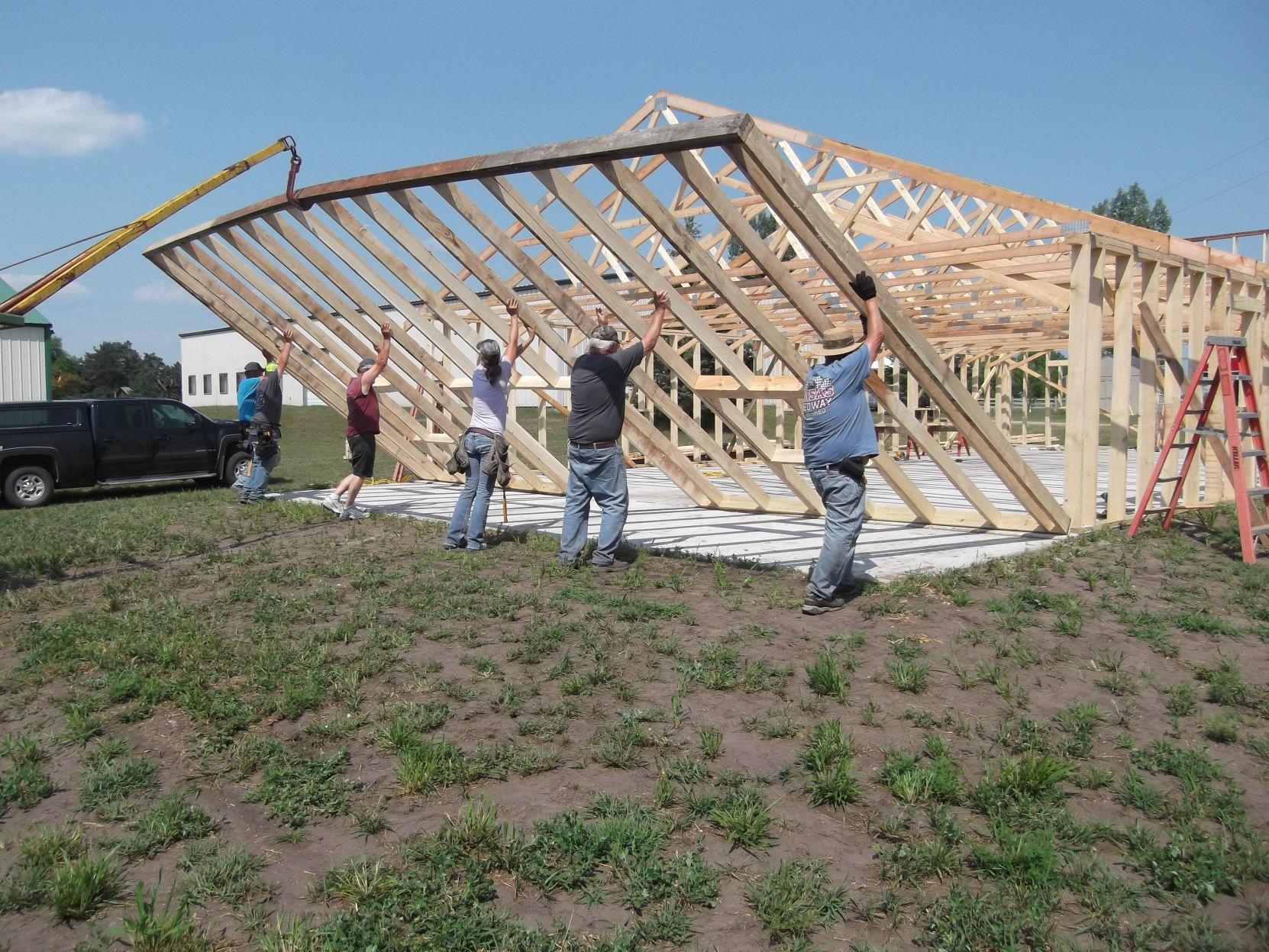 Volunteers raise a wall of the Women’s Activity Building in July. The work continues on the building, which will be open during the Forest City Threshers show Aug. 21-22.

Mesa Hicks spends some quiet time with her goats Thursday afternoon at the Meeker County Fair.

Sofia Radtke, 5, of Hutchinson holds still as a member of the Hutchinson Clown Club paints rainbows on her face Saturday afternoon at the fair.

Emily Frederickson leads her cow out of the show ring Saturday afternoon at the Meeker County Fair.

Emily Frederickson leads her cow out of the show ring Saturday afternoon at the Meeker County Fair.

The Meeker County Fair returned to the fairgrounds in Litchfield this past weekend, bringing crowds of a people to a summertime staple that was canceled in 2019 due to the COVID-19 pandemic.

Paid attendance at the fair this year was 10,816, well below attendance the previous two years. However, some of the decline was due to the fact that Sunday was a free admission day, and no attendance was kept.

Highest attendance this year was Saturday, when 4,219 people passed through the gates. That attendance was helped by the grandstand show, a bull riding event that drew 1,001 people. Attendance Thursday was 2,711, and there were 3,886 attendees Friday.

Other grandstand shows were a tractor pull that drew 569 fans Thursday night, and a “Big Air ATV” show that drew 817 people Friday night.

See more photos from the fair on Page 12.

Lyle Ross receives his Senior Volunteer of the Year award from Donna Whitcomb during a program Friday at the Meeker County Fair bandshell.

The spirit of volunteerism garnered attention Friday afternoon at the Meeker County Fair.

Carol Nelson of Grove City and Lyle Ross of Watkins were recognized as Senior Volunteer of the Year during a ceremony at the fair bandshell.

The Senior Volunteer of the Year winners are chosen from people nominated by the public. Traditionally, the award is given to one woman and one man, though there have been years when no nominees were received for one or both genders.

The Meeker County award was first presented in 1971, according to Donna Whitcomb, director of the Retired Senior Volunteer Program in Meeker, McLeod, Kandiyohi, Renville and Swift counties, though there was a nine-year span when there was no winner due to lack of nominees.

"I love every year I get to come here and announce the senior of the year," Whitcomb said. "We always try to surprise them. It's just wonderful the way all the families and friends and coworkers get the (winners) here."

This year’s Meeker County winners’ names will be forwarded to the Minnesota State Fair, along with senior volunteer award winners from around the state, and Minnesota’s Outstanding Senior Citizens will be be announced Thursday, Sept. 2, at the state fair.

Nelson was nominated, Whitcomb said, because of her support for the Grove City community through fundraisers, dinners, expos and auctions, volunteering her time “or using her baking talents to fill the cookie tables.”

Multiple nominators described Nelson as “a gracious volunteer,” and one who “always has a smile on her face,” Whitcomb said, adding that another nominations said, “She is always willing to help bring sunshine to someone’s day.”

Nelson “just seems to know when something needs to be done, and she does it,” Whitcomb said. “Whether it is starting the coffee, or setting the tables, working the registration table, or helping clean up after events. She’s always there!”

Some of those qualities likely were honed during her work career as a lead on a manufacturing line, in addition to being an adult leader for the Star Lake 4-H Club, while raising seven children on a farm with her husband, Whitcomb said.

“Maybe you know her as the voice of the Grove City Area C.A.R.E. volunteer who answers your phone call, or the RSVP volunteer leading the SAIL exercise class,” Whitcomb said. “You just never know where you will find her.”

Ross was described as “community-minded and always thinking of others” by his nominator.

His work with the American Cancer Society and Meeker County Relay For Life were highlighted. A U.S. Air Force veteran, Ross also has been an active member of the Watkins American Legion, for which he volunteered during the Legion’s 100-year celebration.

Ross’ dedication to veterans and veterans issues, for which he is a tireless promoter, is perhaps most visible in his countless hours spent as a volunteer driver for the Meeker County Veterans Service Office.

“He can usually be found driving the veterans van one to three times per week, transporting veterans to the St. Cloud VA hospital,” Whitcomb said. “His normal day is about eigh hours, and he enjoys every minute of service!”

Ross has made 487 trips driving veterans to appointments since beginning his volunteer service in 2018 — an average of more than 120 rides provided every year.

It was during this service that Ross saw a need for emergency oxygen kits in the veterans service van and advocated for the purchase of two kids. He then ensured that all volunteer drivers were trained in use of the kits.

“I’d like to not only thank him for his service to his country,” Whicomb said, “but also to the people of Meeker County.”

Steve and Joan Turck were recognized by the University of Minnesota at Farmfest last week as the Meeker County Farm Family of the Year.

The Wraspir family — Andrew, Betty, Claire, Ethan and Dale — spent some time hunting and cutting down the right Christmas tree at Turck’s Trees back in 2019. Like the Wraspirs, many local families have made Turck’s a holiday tradition.

When the Turck family of Litchfield learned they would be honored as Meeker County's 2021 University of Minnesota Farm Family of the Year, it came as a surprise.

Joan and her husband, Steve, are the fourth generation on the Turck farm. In the past, the Turcks raised registered Hampshire hogs and were crop farmers. They also operated a dog boarding kennel. Currently, the family grows corn, soybeans and Christmas trees, and enroll land in the Conservation Reserve Program.

"We had some property that was quite sandy, and oats and small grain didn't grow well on it," Joan said.

A soil and water conservation officer suggested growing trees on the land, which brought full circle a wish of Steve, who had hoped to grow trees when he was in FFA. He had decided not to at the time to avoid stepping on a neighbor's toes.

"We decided instead of putting money in small grain and not making it profitable, we would try Christmas trees," Joan said.

Since then, the operation has grown to a choose-and-cut Christmas tree farm. Deciduous trees were added in the early 2000s. Evergreen and deciduous trees are sold for planting. Trees take seven to 10 years to grow to size to be chopped down.

In addition to growing and selling six types of Christmas trees, the family operates a seasonal gift shop and sells custom designed balsam and Fraser fir wreaths. The Turcks get help from their immediate family and employees. Steve and Joan's son Jesse, his wife, Jean and their three children provide help seasonally and whenever they are able. Steve and Joan’s son Nathan and his wife, Jessica, and their three children provide help wherever needed.

Steve was a coach for the Litchfield Youth Wrestling Program, a board member and past president of the Minnesota Christmas Tree Growers Association, and a longtime member of the Minnesota Corn Growers Association and Pheasants Forever. Joan is a retired nurse and volunteers time with the Litchfield Area Hospice, and volunteers at the family’s church. Steve and Joan have been supporters and leaders with 4-H and FFA. Both are supporters of the Litchfield Area Mentorship Program.

There's also a lunch buddies program, which invites mentors to have lunch with students at school certain days of the week.

"It's a fill-in to help kids who need some extra attention and love," Joan said.

She and Steve are anxiously waiting to see what comes next after the COVID pandemic cut back volunteering opportunities.

"We just weren't able to do things we would in a normal year," Joan said.

Farm families such as the Turcks were recognized at a ceremony Aug. 5 at Farmfest near Redwood Falls.

Profiles of the 2021 honorees and information on the recognition event can be found at z.umn.edu/farm-families-year. The Turck Family was also recognized during the Meeker County Fair this past weekend. Families are chosen by a committee based on commitment to their communities and to enhancing agriculture.