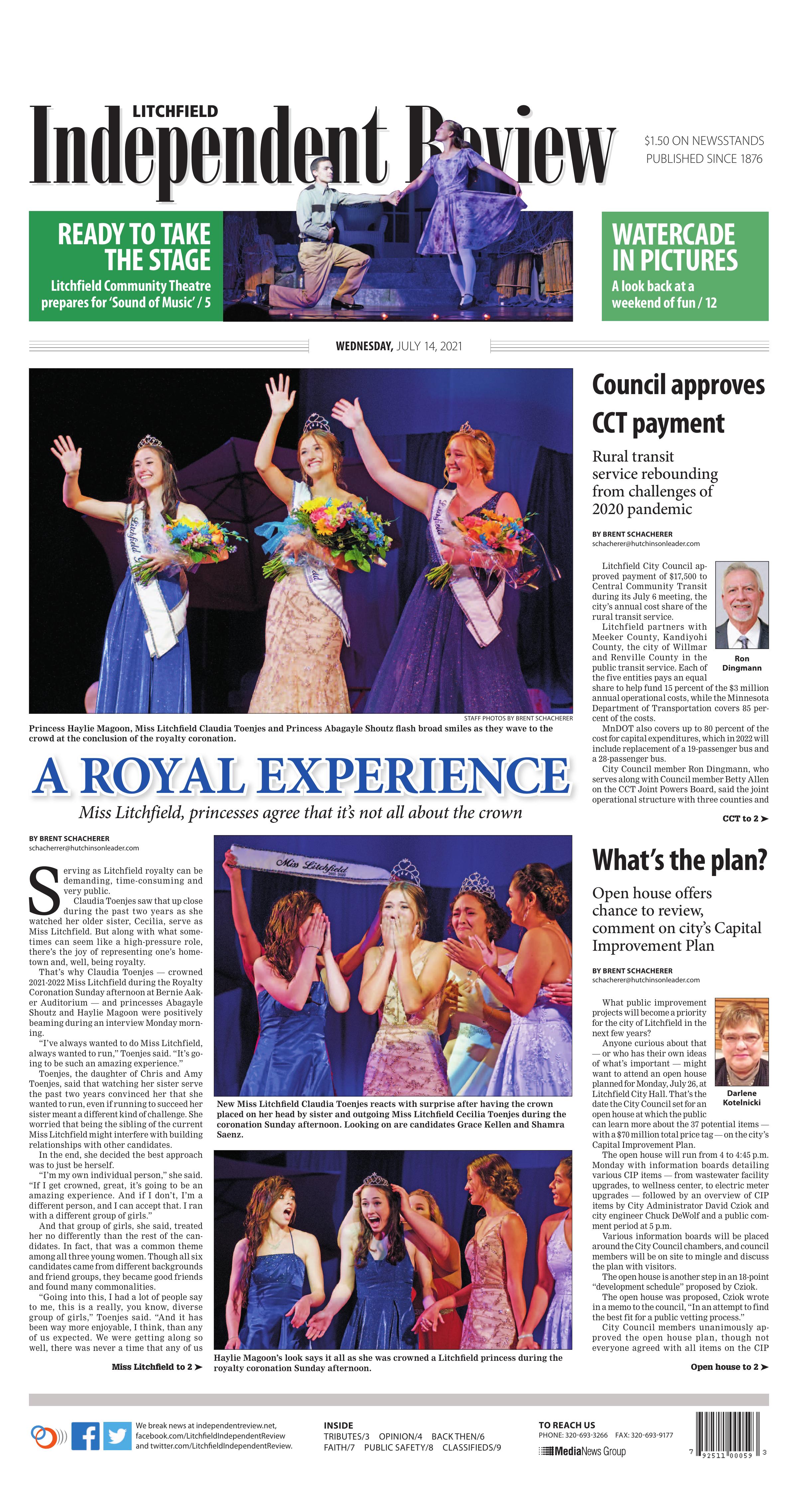 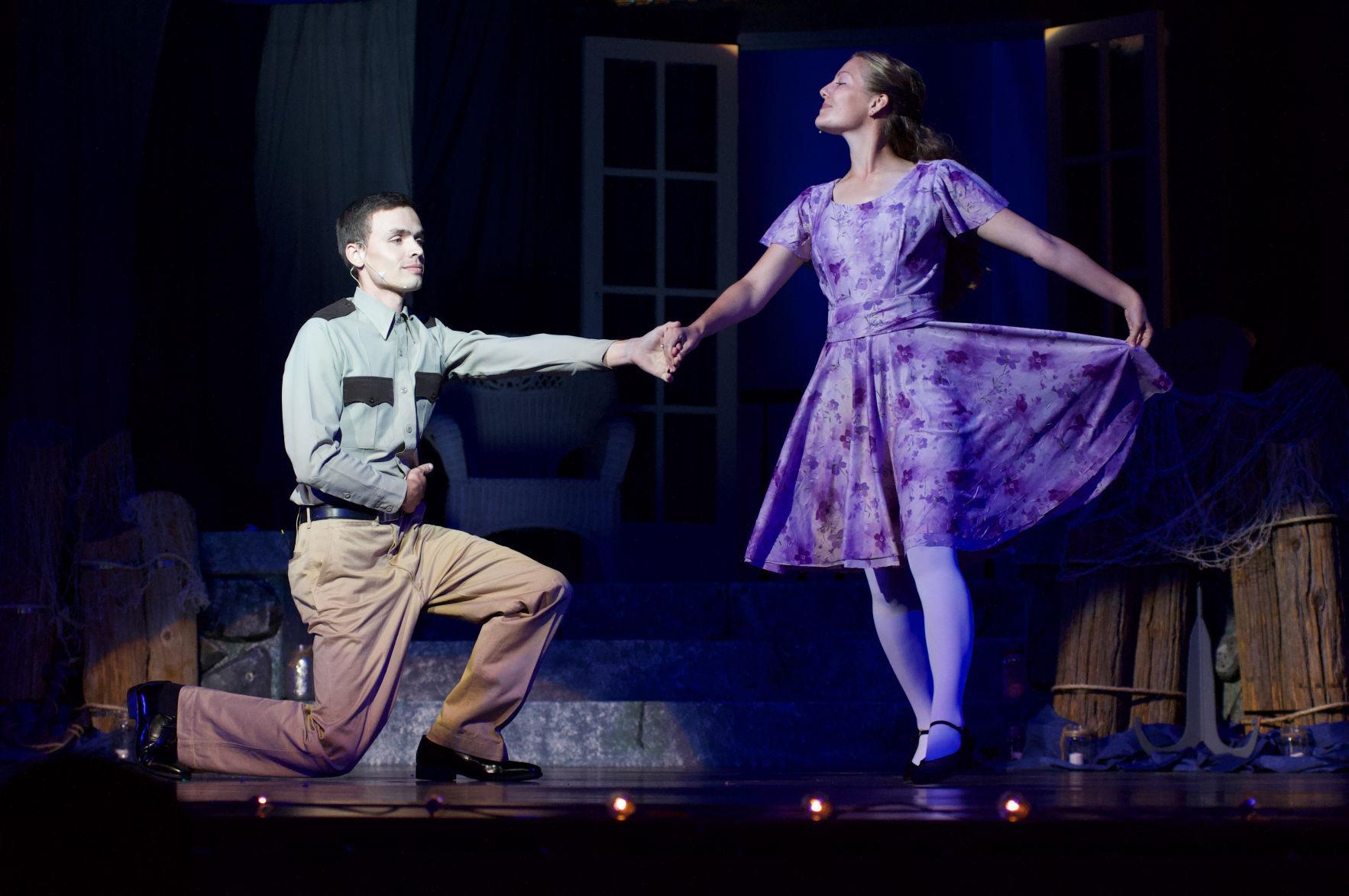 Princess Haylie Magoon, Miss Litchfield Claudia Toenjes and Princess Abagayle Shoutz flash broad smiles as they wave to the crowd at the conclusion of the royalty coronation.

New Miss Litchfield Claudia Toenjes reacts with surprise after having the crown placed on her head by sister and outgoing Miss Litchfield Cecilia Toenjes during the coronation Sunday afternoon. Looking on are candidates Grace Kellen and Shamra Saenz.

A tearful Cecilia Toenjes hugs her sister Claudia after crowning her as her Miss Litchfield successor.

Haylie Magoon’s look says it all as she was crowned a Litchfield princess during the royalty coronation Sunday afternoon.

Abagayle Shoutz is crowned a Litchfield princess by Ellery Jones, who served as a princess in 2019-2020.

Haylie Magoon was chosen by her fellow Miss Litchfield candidates as winner of the Miss Congeniality award.

Haylie Magoon was chosen by her fellow Miss Litchfield candidates as winner of the Miss Congeniality award.

The six Miss Litchfield candidates hold hands as they wait anxiously for the crowning ceremony to begin.

Miss Litchfield Cecilia Toenjes gives a final wave to the crowd at Bernie Aaker Auditorium as she ended her reign Sunday.

Serving as Litchfield royalty can be demanding, time-consuming and very public.

Claudia Toenjes saw that up close during the past two years as she watched her older sister, Cecilia, serve as Miss Litchfield. But along with what sometimes can seem like a high-pressure role, there’s the joy of representing one’s hometown and, well, being royalty.

Toenjes, the daughter of Chris and Amy Toenjes, said that watching her sister serve the past two years convinced her that she wanted to run, even if running to succeed her sister meant a different kind of challenge. She worried that being the sibling of the current Miss Litchfield might interfere with building relationships with other candidates.

In the end, she decided the best approach was to just be herself.

“I’m my own individual person,” she said. “If I get crowned, great, it’s going to be an amazing experience. And if I don’t, I’m a different person, and I can accept that. I ran with a different group of girls.”

And that group of girls, she said, treated her no differently than the rest of the candidates. In fact, that was a common theme among all three young women. Though all six candidates came from different backgrounds and friend groups, they became good friends and found many commonalities.

“Going into this, I had a lot of people say to me, this is a really, you know, diverse group of girls,” Toenjes said. “And it has been way more enjoyable, I think, than any of us expected. We were getting along so well, there was never a time that any of us can recall during the entire month and a half that we were candidates, where there was drama, where we didn’t get along. That’s pretty rare for a group of girls so different coming together.”

That strong bond, the three agreed, made Sunday’s coronation somewhat bittersweet. As they stood on the auditorium stage, with outgoing royalty dancing around them with crown and sash to build anticipation, they realized that all were deserving of royal titles.

“Honestly, in my opinion, it could be any of us,” Toenjes said. “We had so many good candidates this year. There could have been good reasons why everyone up there was crowned. And so it was just emotional.”

Shoutz received her crown first — a development that left her screaming in surprise.

“I was definitely glad (to be first),” she said, “Because there was a lot of emotions going through me. I thought I was gonna squeeze Gracie’s (Kellen, fellow candidate) hand right off, because I was holding on to her so tight.”

Shoutz, the daughter of Jon and Crisi Shoutz, has her own link to royalty, with her sister Laura serving as a Litchfield princess in 2018-2019. She said that the glamour of being royalty was special, but representing her hometown would be special even without the crown.

“We were actually asked a question — we didn’t have to answer it to anyone — but, ‘Would you do this if there wasn’t a crown and sash in the end?’” she said. “And I mean, personally, my answer was yes … all of our answers were yes. Even though there could have be no sparkle in the end … there’s always going to be sparkle from within.”

Magoon said the coronation and bonding with other candidates was a growing experience for her, and she hopes to serve as an example for other girls who don’t often see the spotlight.

“I’ve never had too many opportunities to put myself out there,” Magoon said. “So just being a candidate already put me way out of my shell, and I grew so much. And I knew that if I was crowned it would help even more.

“I want to inspire younger girls like me, that aren’t very outgoing and this is something they never thought they would do, that they can do it,” she added. “They can achieve great things and they would love it.”

The royal trio will make their first official public appearance together Saturday at a parade in New London. Before then, they planned visits to Litchfield businesses and local sponsors of Watercade, and of course, a trip to shop for the many outfits they will wear during their next year’s reign.

But take away all the glitz, the young women agreed, and being an ambassador would still be a royal experience.

“The crowns and sashes … this experience is so much more than that,” Toenjes said. “And we all, I think, realized that, I kind of can speak for them, we would all probably still do this even if it wasn’t all the glory and everything. Because just getting the opportunity to have that connection to the town that we’ve all grown up in is super unique.”

Litchfield partners with Meeker County, Kandiyohi County, the city of Willmar and Renville County in the public transit service. Each of the five entities pays an equal share to help fund 15 percent of the $3 million annual operational costs, while the Minnesota Department of Transportation covers 85 percent of the costs.

MnDOT also covers up to 80 percent of the cost for capital expenditures, which in 2022 will include replacement of a 19-passenger bus and a 28-passenger bus.

City Council member Ron Dingmann, who serves along with Council member Betty Allen on the CCT Joint Powers Board, said the joint operational structure with three counties and two cities “has been a good move” and “is going very well.”

The per-entity cost for CCT actually dropped from 2020, when the five units of government paid $20,500 each for the 2021 fiscal year. The reduction was due to federal pandemic relief funds, Dingmann said.

Last year was challenging for CCT, due to the pandemic, Dingmann said. Ridership plummeted from an average of 5,400 per week in February 2020 to just 562 in April 2020 when the COVID-19 pandemic forced statewide shelter in place orders and various shutdowns.

But the transit service has seen a steady bounce-back since about October as restrictions have loosened. The ridership average rose to 3,200 weekly in October 2020, to 4,500 in April this year.

“It’s been quite a comeback” Dingmann said.

“I’m just glad we have the service,” Allen added. “A lot of people depend on it.”

Council member Sarah Miller agreed, saying that her youngest child used the bus to get to school. She said she was concerned about the service continuing, and especially how to keep it affordable for families who rely on it to transport their children to preschool and other activities.

In the past, chaperones have ridden CCT buses that transport young children, but funding for the chaperones must be found. Litchfield Community Education has done fundraising to help cover fares, according to Council member Darlene Kotelnicki.

“We are looking at a way to fund chaperones,” Dingmann said.

In addition, Dingmann said, CCT’s board continues to look at other improvements, including fare collection technology to reduce contact between riders and drivers, as well as ways to expand the service’s reach through collaboration with other regional transit services in areas like Hutchinson and even St. Cloud.

“(We are) trying to connect rural Minnesota,” he said. “We’re trying to get further expansion as we go. That’s going to be our next step.”

What public improvement projects will become a priority for the city of Litchfield in the next few years?

Anyone curious about that — or who has their own ideas of what’s important — might want to attend an open house planned for Monday, July 26, at Litchfield City Hall. That’s the date the City Council set for an open house at which the public can learn more about the 37 potential items — with a $70 million total price tag — on the city’s Capital Improvement Plan.

The open house will run from 4 to 4:45 p.m. Monday with information boards detailing various CIP items — from wastewater facility upgrades, to wellness center, to electric meter upgrades — followed by an overview of CIP items by City Administrator David Cziok and city engineer Chuck DeWolf and a public comment period at 5 p.m.

Various information boards will be placed around the City Council chambers, and council members will be on site to mingle and discuss the plan with visitors.

The open house is another step in an 18-point “development schedule” proposed by Cziok.

The open house was proposed, Cziok wrote in a memo to the council, “In an attempt to find the best fit for a public vetting process.”

City Council members unanimously approved the open house plan, though not everyone agreed with all items on the CIP list. Council member Darlene Kotelnicki said she questioned including the wellness center in the plan, because it has not been talked about formally since a 2019 review of an initial proposal by the City Council.

“I’m really uncomfortable about putting things about the wellness center in front of people,” Kotelnicki said, adding that there were elements of the 2019 plan that “we didn’t like (and) it has things in there that we’ve questioned. I’m just uncomfortable putting that out. I’m not ready to just rubber stamp (a plan).”

The CIP makes statements about the city’s bond rating and other items, and even though City Council members know the wellness center plan is not “definite,” Kotelnicki said, “if we put it out, somebody’s going to perceive it” that way.

Council member Eric Mathwig, however, said he thought including the wellness center and other items in the open house discussionwas “a good way to get feedback.”

Council member Sarah Miller agreed, adding that she thought it important that the City Council “keep moving forward with it.”