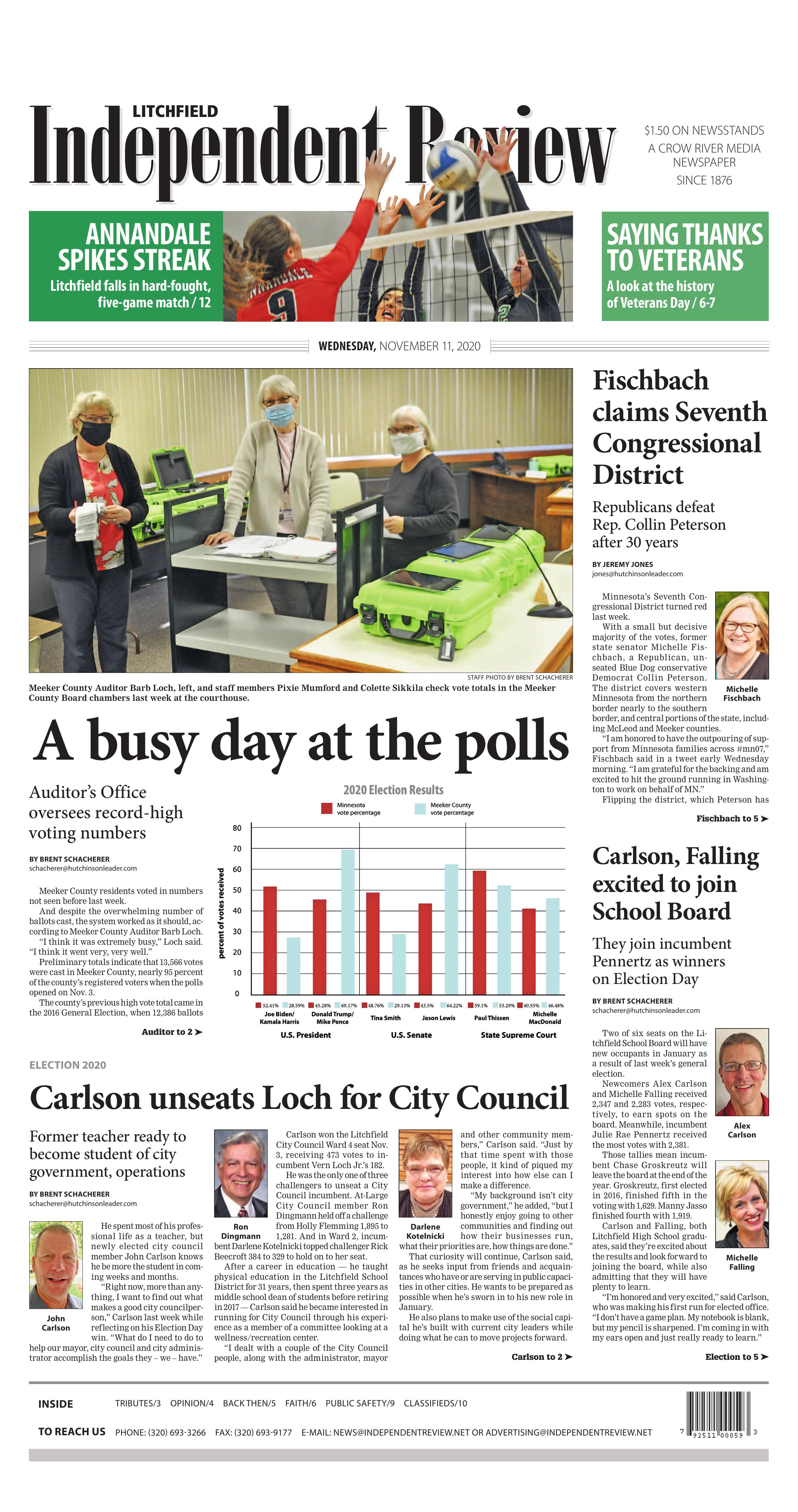 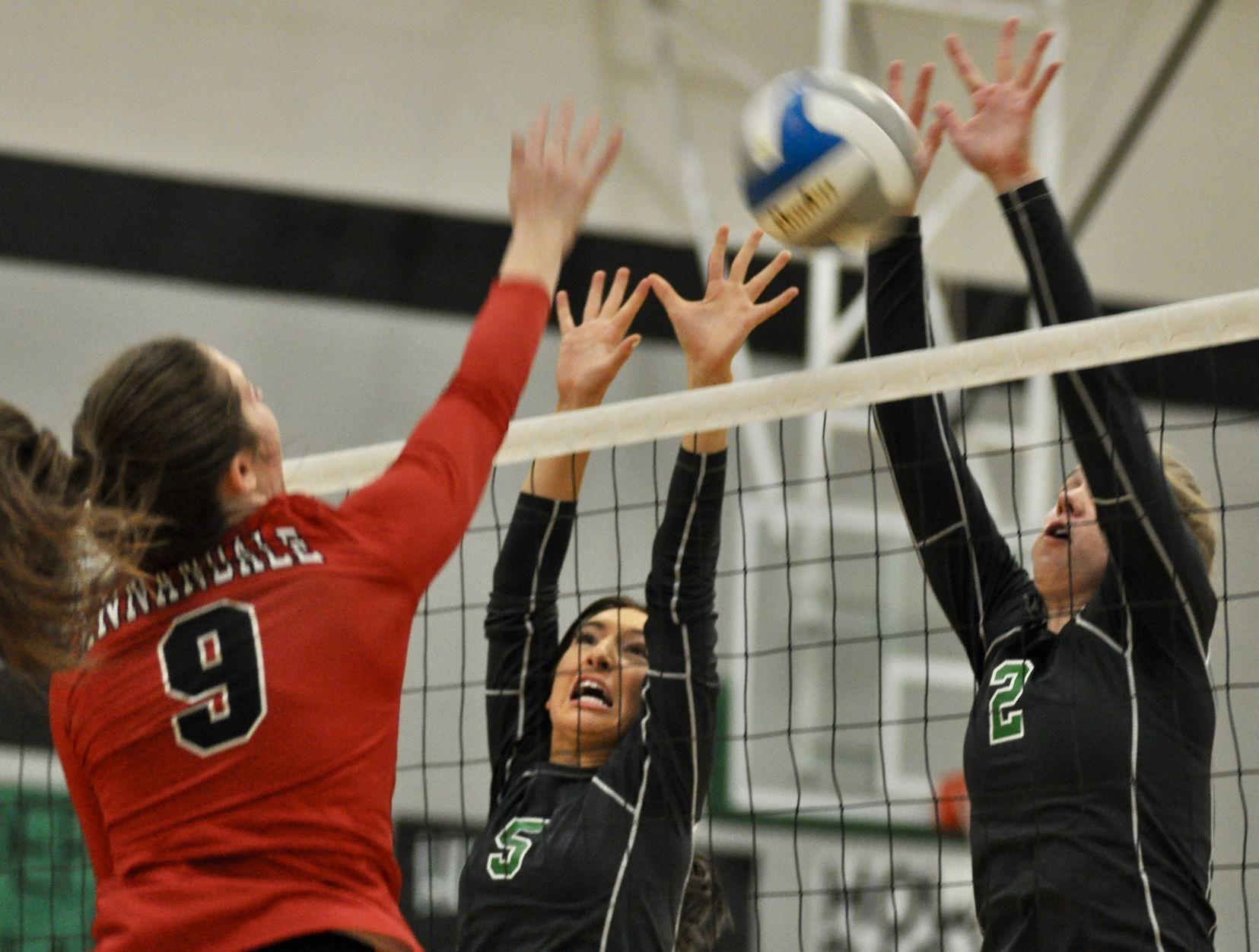 And despite the overwhelming number of ballots cast, the system worked as it should, according to Meeker County Auditor Barb Loch.

Preliminary totals indicate that 13,566 votes were cast in Meeker County, nearly 95 percent of the county’s registered voters when the polls opened on Nov. 3.

The county’s previous high vote total came in the 2016 General Election, when 12,386 ballots were cast.

Of the record vote total, 7,282 ballots — 53.7 percent — were cast in person on Election Day, according to the auditor’s office. That meant slightly more than 46 percent of the ballots were cast early — either by residents of the 10 Meeker County cities and townships that have mail voting, or by those who cast an absentee ballot.

And vote-by-mail and absentee ballots boosted turnout, it also was the most problematic for local election officials.

“There was definitely way more educated needed on the absentee and mail ballot process,” Loch said, adding that she was troubled by the amount of misinformation spread on social media.

Even though the auditor’s office and the Minnesota Secretary of State’s office put out an abundance of information about the absentee and vote-by-mail process, Loch said, she felt like they were “competing with the media, and not even the correct media, social media, in what the voters should believe.”

The vote totals remain unofficial until the county’s canvassing board — a five-member board consisting of county elected and administration members — meets to certify the numbers. That will happen Friday, Loch said.

Before then, she and her staff were busy scrutinizing results and reviewing the process. Because of their multiple checks, Loch said, vote totals are unlikely to change much, if at all, for any local race.

“We may fluctuate somebody up one or down one, but in my history that’s not going to change anything,” Loch said. “We are very thorough.”

That thoroughness and series of checks and balances played out a few times on Election Day. In one case, a young couple went to their polling place to vote in person, but they showed up on the voter registry as having been mailed a ballot. Communication between the polling location and auditor’s office confirmed their ballots had not been returned, and they were allowed to vote in person.

In another instance, a voter showed up at the polling location, but the registry showed their absentee ballot had already been accepted. The auditor’s office was able to go to its ballot storage area and retrieve the absentee ballot with the voter’s signature, verifying the ballot.

In neither case did Loch feel like the voter was attempting to vote improperly, but the system of checks established for absentee or mail-in ballots worked as it should.

“It worked for the voter,” Loch said. “They had every privilege they should have to vote.”

He spent most of his professional life as a teacher, but newly elected city council member John Carlson will become a student in coming weeks and months.

“Right now, more than anything, I want to find out what makes a good city councilperson,” Carlson last week while reflecting on his Election Day win. “What do I need to do to help our mayor, city council and city administrator accomplish the goals they – we – have.”

He was the only one of three challengers to unseat a City Council incumbent. At-Large City Council member Ron Dingmann held off a challenge from Holly Flemming 1,895 to 1,281. And in Ward 2, incumbent Darlene Kotelnicki topped challenger Rick Beecroft 384 to 329 to hold on to her seat.

After a career in education — he taught physical education in the Litchfield School District for 31 years, then spent three years as middle school dean of students before retiring in 2017 — Carlson said he became interested in running for City Council through his experience as a member of a committee looking at a wellness/recreation center.

“I dealt with a couple of the City Council people, along with the administrator, mayor and other community members,” Carlson said. “Just by that time spent with those people, it kind of piqued my interest into how else can I make a difference.

“My background isn’t city government,” he added, “but I honestly enjoy going to other communities and finding out how their businesses run, what their priorities are, how things are done.”

That curiosity will continue, Carlson said, as he seeks input from friends and acquaintances who have or are serving in public capacities in other cities. He wants to be prepared as possible when he’s sworn in to his new role in January.

He also plans to make use of the social capital he’s built with current city leaders while doing what he can to move projects forward.

Carlson said he's built relationships with Mayor Keith Johnson, when both were teachers, and with City Administrator David Cziok, first when Cziok was a high school football player and later when they worked together on creating basketball-tennis courts on Gilman Avenue and Sixth Street.

“People need to teach me, and I need to lean on people,” he said. “I’m looking forward to having them help me learn what’s going on. That’s the goal.”

Among the projects that will be on the agenda, for both Carlson and the City Council, is the wellness/recreation center. The bonding bill passed by the Minnesota Legislature in October included $5 million to help fund construction of a wellness facility.

Of course, the COVID-19 pandemic and its effect on the economy and the city’s financial picture is likely to play a significant role in whether the city moves ahead with a wellness center.

“I don’t know if this is a good time or a bad time,” Carlson said of the topic. “The general perception would be, it’s probably not a good time, the finances in the world are tough. Honestly, I’ve always felt that through adversity, sometimes opportunity arises. I think you have to look at it that way, too.”

With a small but decisive majority of the votes, former state senator Michelle Fischbach, a Republican, unseated Blue Dog conservative Democrat Collin Peterson. The district covers western Minnesota from the northern border nearly to the southern border, and central portions of the state, including McLeod and Meeker counties.

“I am honored to have the outpouring of support from Minnesota families across #mn07,” Fischbach said in a tweet early Wednesday morning. “I am grateful for the backing and am excited to hit the ground running in Washington to work on behalf of MN.”

Flipping the district, which Peterson has held since 1991, became a priority for the GOP following narrowing margins in the past few election cycles and popular support for President Donald Trump in 2016.

Although results are considered preliminary until after canvassing is finished, it appears Fischbach defeated Peterson by a healthy 14-point margin.

Peterson was considered instrumental in the crafting of farm bills and ran as a strong supporter of agriculture in Minnesota and across the country. He served as chairman of the Agricultural Committee from 2007 to 2011, and again from 2018 to 2020 when Democrats regained the House of Representatives.

In advertisements and campaign events, Fischbach painted Peterson as too close to liberal Democrats. At a campaign stop in Glencoe late September, Fischbach also said she would support making the 2017 tax cuts permanent, and she wanted to bolster trade schools.

“We worked hard and we outraised Collin, and we got our message out, and that’s what it took,” Fischbach said in a KTGO radio interview early Nov. 4. “It took the money, and the staff people and the organization to get that message out. And people finally were able to understand what Collin was really about. I think with President Trump on the ticket it was a great way to make that message stronger.”

A statement sent to the media Wednesday morning from Peterson’s campaign said, “I’d like to thank the people of the Seventh District for their support over the years. Serving them in Washington, D.C., has been a great honor, and I respect their decision to move in a different direction. We ran a strong and positive campaign, but with the president winning this district by 30 points again, and the millions in outside money that was spent to attack me, the partisan tilt of this district was just too much to overcome.”

Results are considered preliminary until canvassing is finished.

Two of six seats on the Litchfield School Board will have new occupants in January as a result of last week’s general election.

Newcomers Alex Carlson and Michelle Falling received 2,347 and 2,283 votes, respectively, to earn spots on the board. Meanwhile, incumbent Julie Rae Pennertz received the most votes with 2,381.

Those tallies mean incumbent Chase Groskreutz will leave the board at the end of the year. Groskreutz, first elected in 2016, finished fifth in the voting with 1,629. Manny Jasso finished fourth with 1,919.

Carlson and Falling, both Litchfield High School graduates, said they’re excited about the results and look forward to joining the board, while also admitting that they will have plenty to learn.

“I’m honored and very excited,” said Carlson, who was making his first run for elected office. “I don’t have a game plan. My notebook is blank, but my pencil is sharpened. I’m coming in with my ears open and just really ready to learn.”

Falling, who ran as a write-in candidate in 2016, offered a similar take.

“I’m excited,” she said. “I don’t know what I don’t know, but I’m excited to understand how a school district operates and hopefully contribute my professional skills and experience.”

Carlson brings a diverse experience to the board, having been a teacher and coach in the Sartell-St. Stephen school district for six years before moving back home to Litchfield where has since worked as a manager at Anderson Chemical. Carlson also has three children in the district.

“My view as a parent is one of appreciation and excitement,” he said. “The experience my kids have been having has been excellent. I can’t say enough good things about the staff they have been blessed to have as teachers in their early education careers.

“I have nothing but great things to say about my own experience (as a student at Litchfield schools),” he added. “And it’s still delivering high quality education experiences.”

Falling, a human resources manager at Doosan Bobcat in Litchfield, said she looks forward to bringing her experiences from the professional world to school operations. By late last week, she said, she had reviewed the district’s teacher contract and taken a lot at other areas.

“I’m coming into it with the attitude that I’m not going to know everything,” Falling said. “The first few months I serve is going to be really absorbing everything like a sponge.”

As she learns, she hopes to help influence the district’s hiring and staffing decisions to help the district continue moving in the right direction.

“I want to learn, what’s the state of this organization and how can we institute the change to elevate our district,” Falling said. “Change doesn’t happen overnight.”

The COVID-19 pandemic is having a major effect on the district, she said, and it is likely to affect the district’s financial picture as well as how education is approached far into the future.

“I think there’s lots of things that have improved” in the district since she was a student, Falling said. “There are probably some things that haven’t changed. I’m a person that’s always thinking it could be better. I don’t like status quo. I like to make changes and make them just a little bit better than they were before.”

Results are considered preliminary until canvassing is finished. (Voters up to three candidates.)