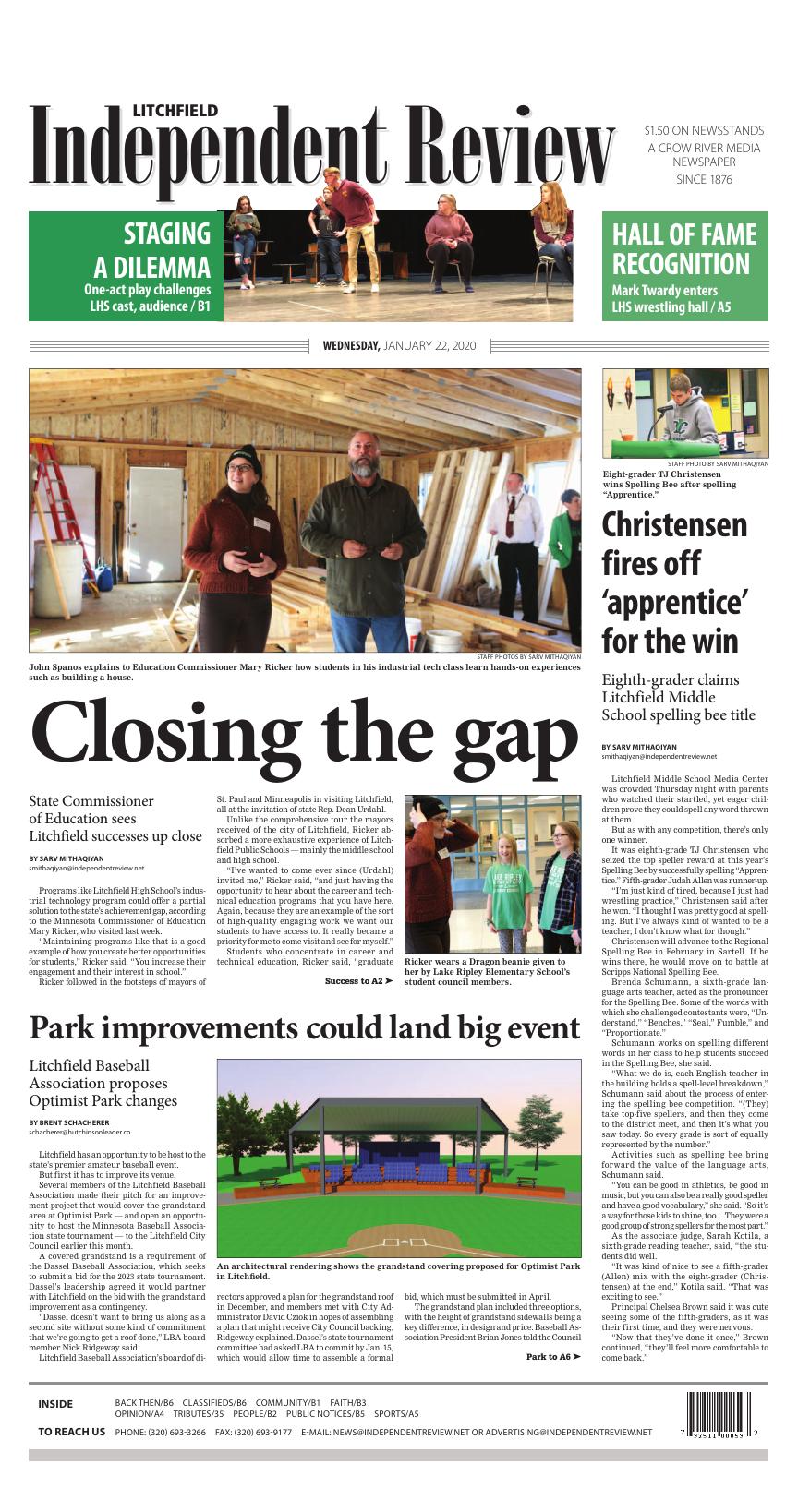 Above — Industrial technology teacher John Spanos, right, explains to Minnesota Commissioner of Education Mary Ricker how students in his class at Litchfield High School learn hands-on experiences such as building a house.

Ricker wears a Dragon beanie given to her by Lake Ripley Elementary School’s student council members.

Programs like Litchfield High School’s industrial technology program could offer a partial solution to the state’s achievement gap, according to the Minnesota Commissioner of Education Mary Ricker, who visited last week.

“Maintaining programs like that is a good example of how you create better opportunities for students,” Ricker said. “You increase their engagement and their interest in school.”

Ricker followed in the footsteps of mayors of St. Paul and Minneapolis in visiting Litchfield, all at the invitation of state Rep. Dean Urdahl.

Unlike the comprehensive tour the mayors received of the city of Litchfield, Ricker absorbed a more exhaustive experience of Litchfield Public Schools — mainly the middle school and high school.

“I’ve wanted to come ever since (Urdahl) invited me,” Ricker said, “and just having the opportunity to hear about the career and technical education programs that you have here. Again, because they are an example of the sort of high-quality engaging work we want our students to have access to. It really became a priority for me to come visit and see for myself.”

Such programs were exemplified in Susan Rohrbeck’s English literature class where she had students create a graphic novel of Edgar Allan Poe’s, “The Black Cat."

Ricker added that another effective method for closing the achievement gap is via differentiated instruction. This approach involves teachers adjusting their curriculum and instruction to maximize the learning of students with different learning styles or needs, according to the Iris Center at Peabody College, Vanderbilt University.

“They’re just two examples of how we eliminate those gaps of disparities with some of the programs I’ve seen here this morning at Litchfield,” Ricker said. “Differentiating instruction is an example of how you make sure students can access the academic standards you’re trying to teach. So making sure that we have professional development that supports teachers and learning how to differentiate.”

Superintendent Beckie Simenson said Litchfield School District was fortunate to receive a visit by Ricker. School administrators also shared with Ricker some of the successes and struggles the district faces.

“We were able to share our concerns about the lack of equitable funding for special education,” Simenson explained. “We also shared the importance of having such a supportive community, as passing our levy and bond referendums were key to helping our district grow.”

“I actually launched a school finance working group this fall that I’m really excited about,” Ricker said about the way she and her colleagues are addressing the constitutional amendment in question. “Education professionals and advocates from across the state of Minnesota are coming together to examine the sort of pressure points we have in funding our schools, (and the) ambitions our school leaders have for the school programming they want to provide our students.

“Now we’re looking at case studies from across the state of how districts are meeting the needs of students with special needs,” she continued, “with our English language learners, how they are addressing those gaps and disparities. And we’re really excited about the work we’re doing and the proposals we are going to have when we finish our work this summer.”

Ricker acknowledged Urdahl’s efforts to make civics education mandatory for the state’s high school students. However, the state reviews its curriculum every 10 years, with social studies set to be reviewed next year, she said.

“It’s going to be an incredible opportunity for us to talk about the role of civics education and those civics standards that we want students to access,” Ricker said. “To practice — to learn how we embed those in the social studies standards.”

Ricker said Litchfield school administrators demonstrated a “generous welcome and open-door policy,” which was more than what she could’ve asked for.

“What I’m so excited about — what I see — is the thoughtfulness behind the sort of experience that Litchfield school leaders and educators are building out for students,” she said.

An architectural rendering shows the grandstand covering proposed for Optimist Park in Litchfield.

Litchfield has an opportunity to be host to the state’s premier amateur baseball event. But first it has to improve its venue.

A covered grandstand is a requirement of the Dassel Baseball Association, which seeks to submit a bid for the 2023 state tournament. Dassel’s leadership agreed it would partner with Litchfield on the bid with the grandstand improvement as a contingency.

“Dassel doesn’t want to bring us along as a second site without some kind of commitment that we’re going to get a roof done,” LBA board member Nick Ridgeway said.

LBA’s board of directors approved a plan for the grandstand roof in December, and members met with City Administrator David Cziok in hopes of assembling a plan that might receive City Council backing, Ridgeway explained. Dassel’s state tournament committee had asked LBA to commit by Jan. 15, which would allow time to assemble a formal bid by the April deadline.

The grandstand plan included three options in design and price, with the height of grandstand sidewalls being a key difference. LBA president Brian Jones told the council that local builder Systems West Inc. had agreed to donate the labor and equipment costs for the project. Material costs, depending on design, are estimated at between $56,810 and about $95,000.

“Litchfield Baseball has been around for quite a number of years,” Jones said. “We’ve worked hand-in-hand with the city.”

Optimist Park was built and has seen constant improvement through that cooperative effort between the association and city, Jones said. Most recently, the two worked together on improving lights at the field.

“We built that park,” Jones said. “We is Litchfield Baseball and the city of Litchfield. I think we both played our parts in helping one another out.”

The 2023 State Amateur Baseball Tournament is a coveted prize, as it will be the 100th anniversary of the tournament — a bit of small-town sports history that is sure to gain “a lot of statewide coverage,” Jones said.

Litchfield played host to its first state tournament in 2016 as the third site along with primary hosts Dassel and Hutchinson. Optimist Park saw 12 Class B and C games played there, with action during all three weekends of the tournament.

Jones told the City Council the baseball association hoped to partner with the city on the grandstand project that could help bring a state tournament back to Litchfield. He said the association could commit $20,000 upfront and $5,000 for each of the next six years, but “our goal, to be honest, is to fundraise the whole amount.”

City Council members seemed generally supportive of the baseball associations efforts during the Jan. 6 meeting, but they would not commit to financial support for the grandstand roof project. Instead, Mayor Keith Johnson told the group that the City Council would be having a workshop in February, at which a long list of projects will be discussed and prioritized.

“We will certainly do the best we can to help you guys out,” Johnson said.

Council Member Vern Loch said that the baseball association’s request “changes our order” if acted upon without consideration of other projects.

“We didn’t come here to jump the line,” Ridgeway said, apologizing for the timing of the request. “But we came here when we had all of our ducks in a row.”

Litchfield Middle School Media Center was crowded Thursday night with parents who watched their startled, yet eager children prove they could spell any word thrown at them.

But as with any competition, there’s only one winner.

It was eighth-grade TJ Christensen who seized the top speller reward at this year’s Spelling Bee by successfully spelling “Apprentice.” Fifth-grader Judah Allen was runner-up.

“I’m just kind of tired, because I just had wrestling practice,” Christensen said after he won. “I thought I was pretty good at spelling. But I’ve always kind of wanted to be a teacher, I don’t know what for though.”

Brenda Schumann, a sixth-grade language arts teacher, acted as the pronouncer for the Spelling Bee. Some of the words with which she challenged contestants were, “Understand,” “Benches,” “Seal,” Fumble,” and “Proportionate.”

Schumann works on spelling different words in her class to help students succeed in the Spelling Bee, she said.

“What we do is, each English teacher in the building holds a spell-level breakdown,” Schumann said about the process of entering the spelling bee competition. “(They) take top-five spellers, and then they come to the district meet, and then it’s what you saw today. So every grade is sort of equally represented by the number.”

Activities such as spelling bee bring forward the value of the language arts, Schumann said.

“You can be good in athletics, be good in music, but you can also be a really good speller and have a good vocabulary,” she said. “So it’s a way for those kids to shine, too… They were a good group of strong spellers for the most part.”

As the associate judge, Sarah Kotila, a sixth-grade reading teacher, said, “the students did well.

“It was kind of nice to see a fifth-grader (Allen) mix with the eight-grader (Christensen) at the end,” Kotila said. “That was exciting to see.”

Principal Chelsea Brown said it was cute seeing some of the fifth-graders, as it was their first time, and they were nervous.

“Now that they’ve done it once,” Brown continued, “they’ll feel more comfortable to come back.” 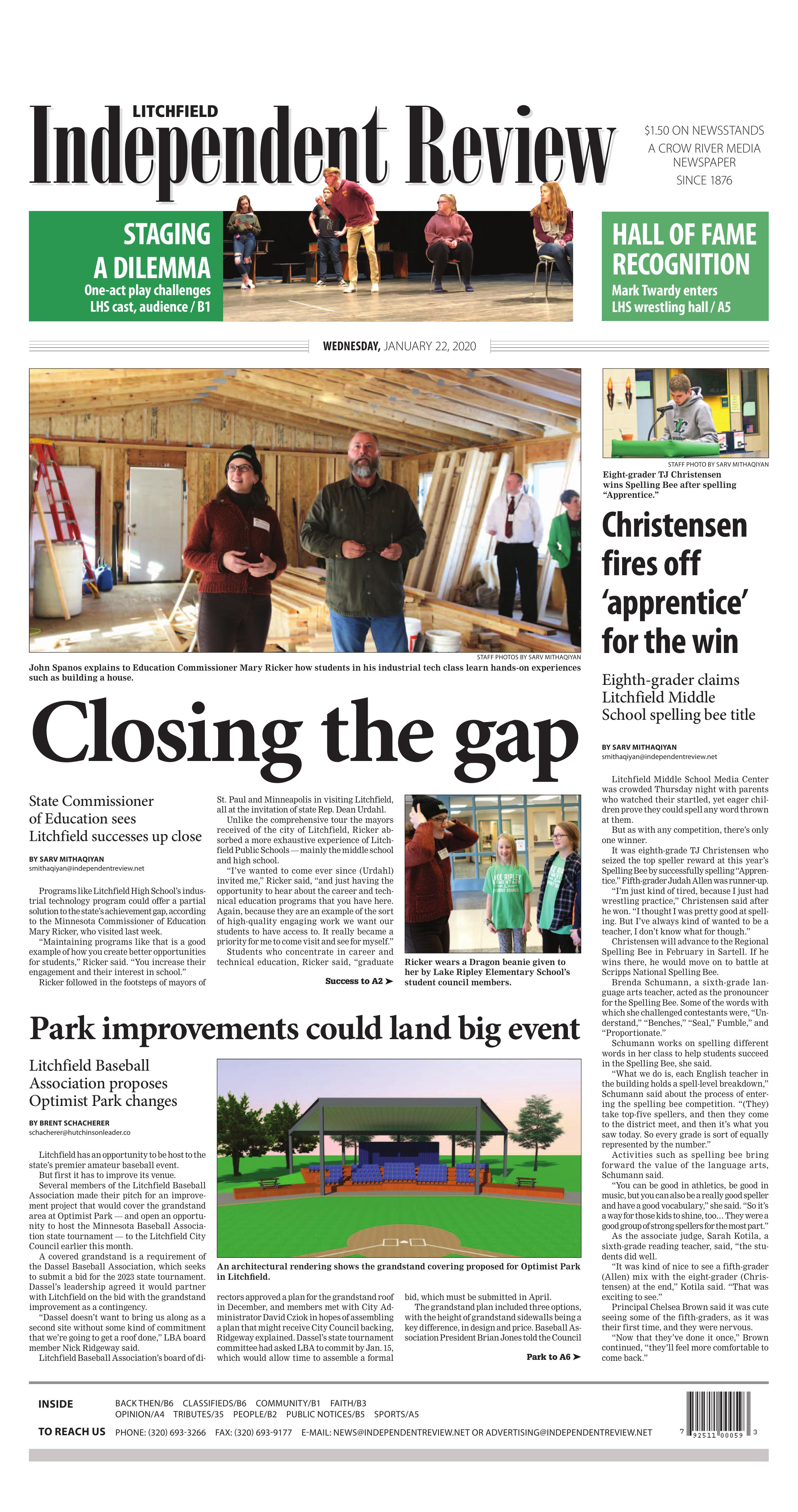