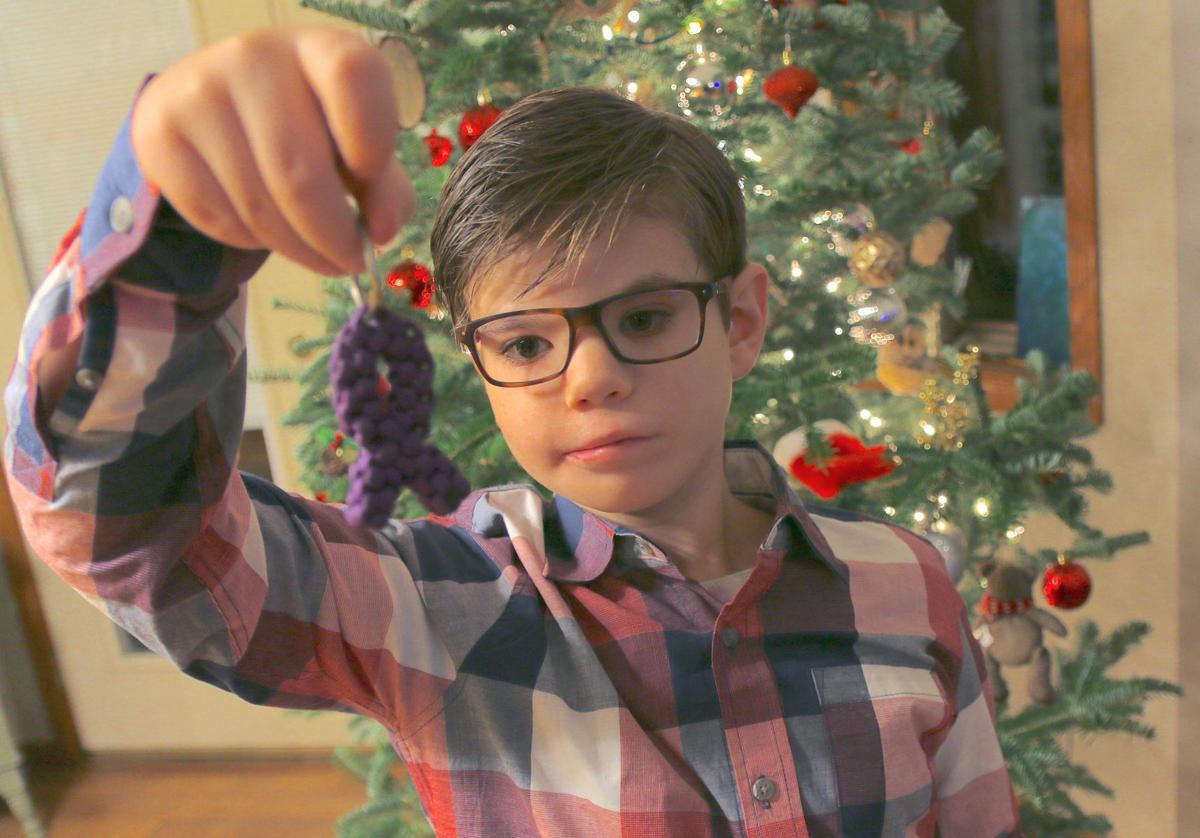 Next time you see a purple ribbon, think of Liam Kraushaar. It’s the awareness symbol for Moebius syndrome. 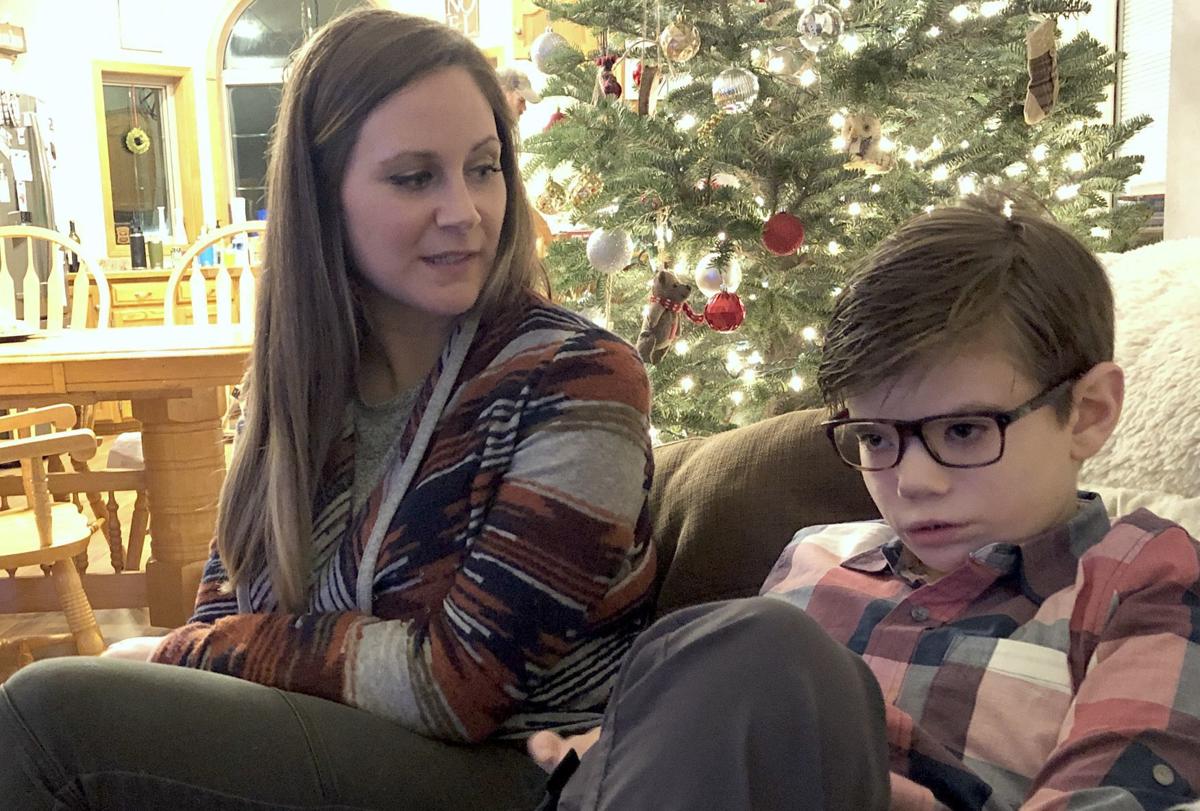 Marissa Kraushaar talks with her son Liam about what it's like living with Moebius syndrome. 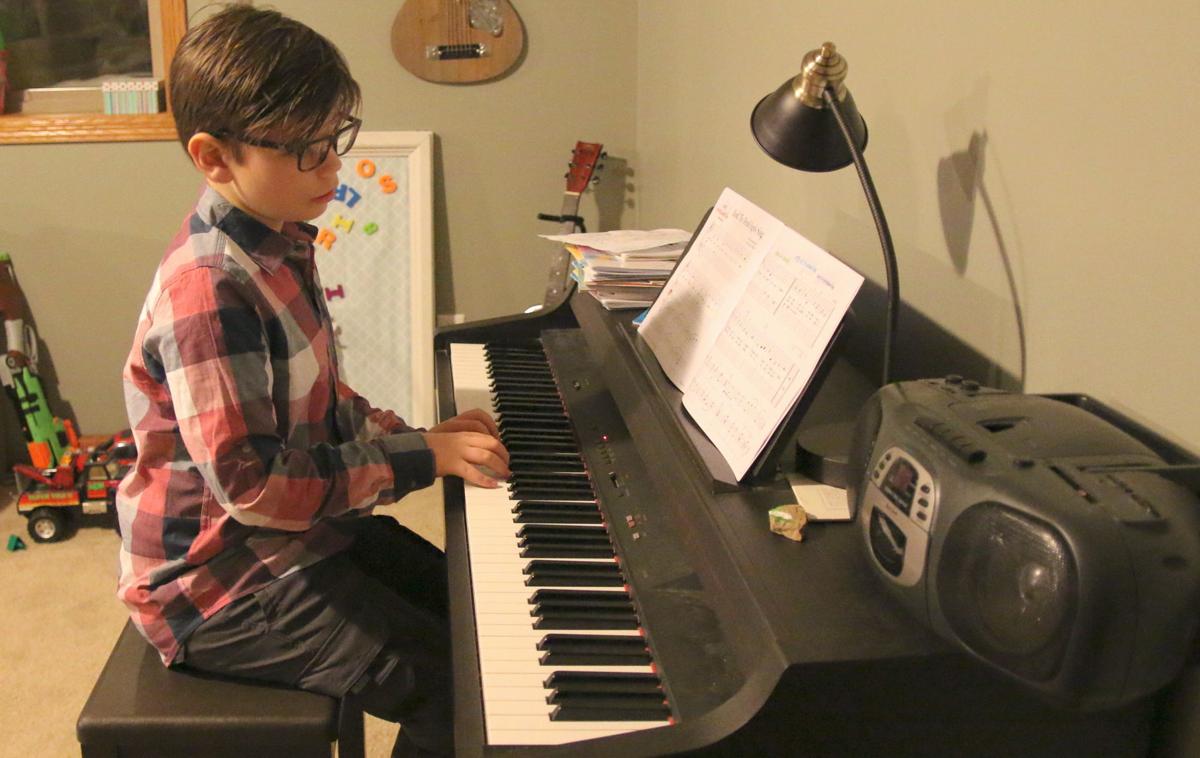 Liam demonstrates his love for music and playing piano for others. 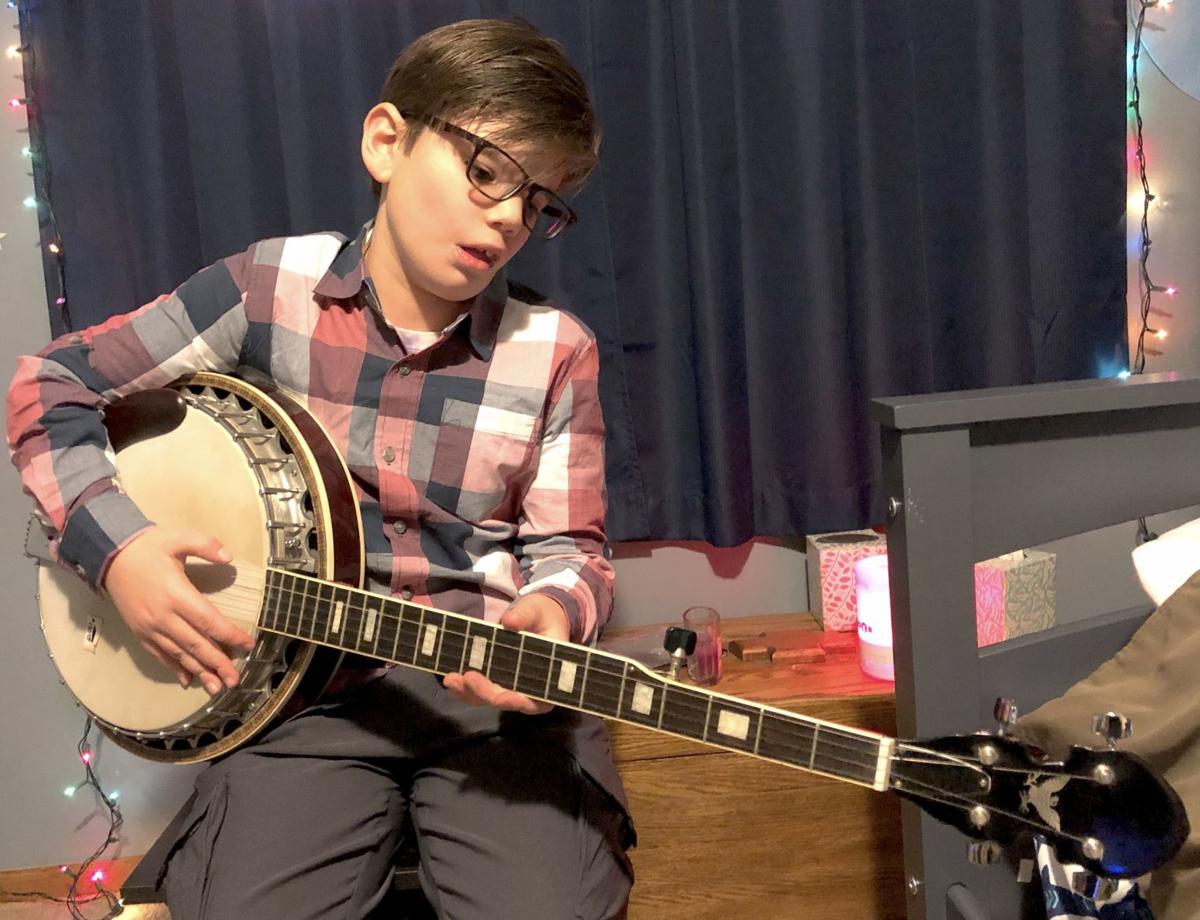 Liam Kraushaar likes to play the banjo, too. His mother describes him as having "an old soul" because of his love of classic rock, blues and bluegrass music.

Next time you see a purple ribbon, think of Liam Kraushaar. It’s the awareness symbol for Moebius syndrome.

Marissa Kraushaar talks with her son Liam about what it's like living with Moebius syndrome.

Liam demonstrates his love for music and playing piano for others.

Liam Kraushaar likes to play the banjo, too. His mother describes him as having "an old soul" because of his love of classic rock, blues and bluegrass music.

Liam Kraushaar wishes doctors had a cure for his lack of facial expression.

People occasionally ask, “Why do you look like that?” the Lake Ripley Elementary second-grader said. “Some people think I’m scary. When I enter the school bus, some people are afraid of me, sometimes they laugh at me.”

But deep inside, “Liam is one of the kindest, most gentle souls there ever was,” his mother, Marissa Kraushaar of Litchfield said. “He’s incredibly empathetic, more so than just the average person. Anytime someone is hurt or injured, he’s always the first person to make sure that person’s OK.”

Liam was born with Moebius syndrome first diagnosed by a German neurologist, Paul Julius Möbius, in the late-1880s, Moebius is a rare neurological condition that inhibits a person's ability to control facial expression and lateral tongue and eye movement.

Liam is incapable of moving his eyebrows, eyelids, puckering his lips, moving his tongue from side to side, or up and down. To blink, Liam must roll his eyes upward, but when sleeping his eyelids shut with gravity’s help, Marissa said.

Liam is cognitively the same as a typical person, however, Marissa said.

“Liam is a super-smart second-grader,” she said. “Cognitively he’s right on target for reading and math — he goes to regular school. But sometimes kids who don’t know Liam, they maybe have some questions, maybe say some hurtful things. Some students and teachers have said Liam has a mental disability, but this is not true. The bus has been a hard time (for Liam) — it’s pretty unsupervised.”

Liam is musically gifted, and he’s been playing the piano since age five, Marissa said. He’s performed in front of people at Mayo Clinic in Rochester, at the Twin Cities International airport and First Lutheran Church in Litchfield.

He likes listening to the Okee Dokee Brothers, and other blues, bluegrass type music, Liam said.

“Liam has an old soul; he likes old classic rock,” Marissa interjected. “He has had music in his soul since day one. He is well beyond his years when it comes to understanding music and rhythm, and he’s very musically inclined.”

During pregnancy, Marissa experienced Liam’s vanishing twin, which doctors suspect may have caused Liam’s condition of facial paresis or muscular weakness. As such, Liam’s sixth and seventh cranial nerves weren’t developed. He isn’t able to smile, frown or blink, and he must move his head from side to side to read or follow the movement of objects.

Causes of Moebius syndrome are unknown, and researchers estimate about one in 50,000 to one in 500,000 newborns are affected, according to the National Institutes of Health website. Researchers speculate the condition might result from changes in blood flow to the brain stem during the early stages of embryonic development.

Liam also was born with club feet, where his feet rotate internally at the ankle, which is another common characteristic for people with Moebius syndrome. So Liam underwent surgery to correct his feet.

“He’s had two surgeries on his left (foot) and one on his right (foot),” Marissa said. “And he had casts once a week, a new cast every week for three months when he was a baby. They had to move tendons around.

“So (Liam) was on casts for the first three months of his life,” she continued. “He had full casts to correct it. They still turn in quite a bit, and he has to wear his (ankle-foot orthosis) braces.”

“He didn’t crawl until after he was one year old, and he didn’t walk until he was two and a half,” she said. “And so, everything was just kind of delayed. But he can ride a bike, run and jump.”

Liam has difficulty enunciating the letters M, B and P, as he can’t use his lips. But through speech therapy, he’s been improving his communication skills, Marissa said.

“And then people could post on social media and do #Moebiussyndrome, and then we can follow on that way,” she continued. “It’s just a way of people showing support for Liam and the Moebius community in general.”

Principal Chris Olson said to foster unity among all the students within Lake Ripley Elementary, the school administrators will ask students to wear purple on Moebius Syndrome Day.

“Of course, it's not mandatory, it's just a way to recognize a situation that isn't really common,” Olson said. “There are lots of different illnesses and diseases out there that are widely known, but this is one that is not. It's a way to bring recognition to it for our students.”

Olson said he will send emails to all parents to promote the event so that students will take part in wearing purple and helping raise awareness about Moebius syndrome.

“Within second-grade classrooms, they've done a lot of educating on what it is,” Olson said. “You know, how to be compassionate, how to show empathy and support to all students that need (it).”

“He's one who's very social,” Olson said describing Liam's personality. “Every time I see him, he says hi. He's super, super pleasant. He's always smiling. He is a second-grade boy who likes to play outside, be active and all those things. He'll look up, and he's got a look of happiness in his eyes and on his face. You could tell that he's just enjoyable to be around.”

The Moebius community has been a big resource for the Kraushaar family. Marissa has learned a great deal from other families experiencing a child with Moebius. For example, how they coped or mitigated more problems.

“So just seeing other adults with Moebius and how they can succeed in life was huge for us,” Marissa said of how this inspired hope in the family and for Liam’s future.

Just as any child his age has dreams, Liam dreams of becoming a doctor or firefighter one day, he said.

One of Marissa’s important takeaways from rearing Liam is that parents need to have a conversation with their children and understand that just because some people look different or appear different, it does not make them weird or scary.

“It’s just, taking that opportunity to be a friend — choosing kindness and sticking up for your friends,” she added. “Adults and parents aren’t always kind to one another, and what kind of example are we setting for our children when children overhear their parents or other adults may be saying mean things to strangers, people they don’t know, or saying condescending comments about other people — we need to be setting positive examples and being positive role models for our children.”

"Within second-grade classrooms, they've done a lot of educating on what it is. You know, how to be compassionate, how to show empathy and support to all students that need (it)."

"...(S)ometimes kids who don’t know Liam, they maybe have some questions, maybe say some hurtful things. Some students and teachers have said Liam has a mental disability, but this is not true. The bus has been a hard time (for Liam) — it’s pretty unsupervised.”