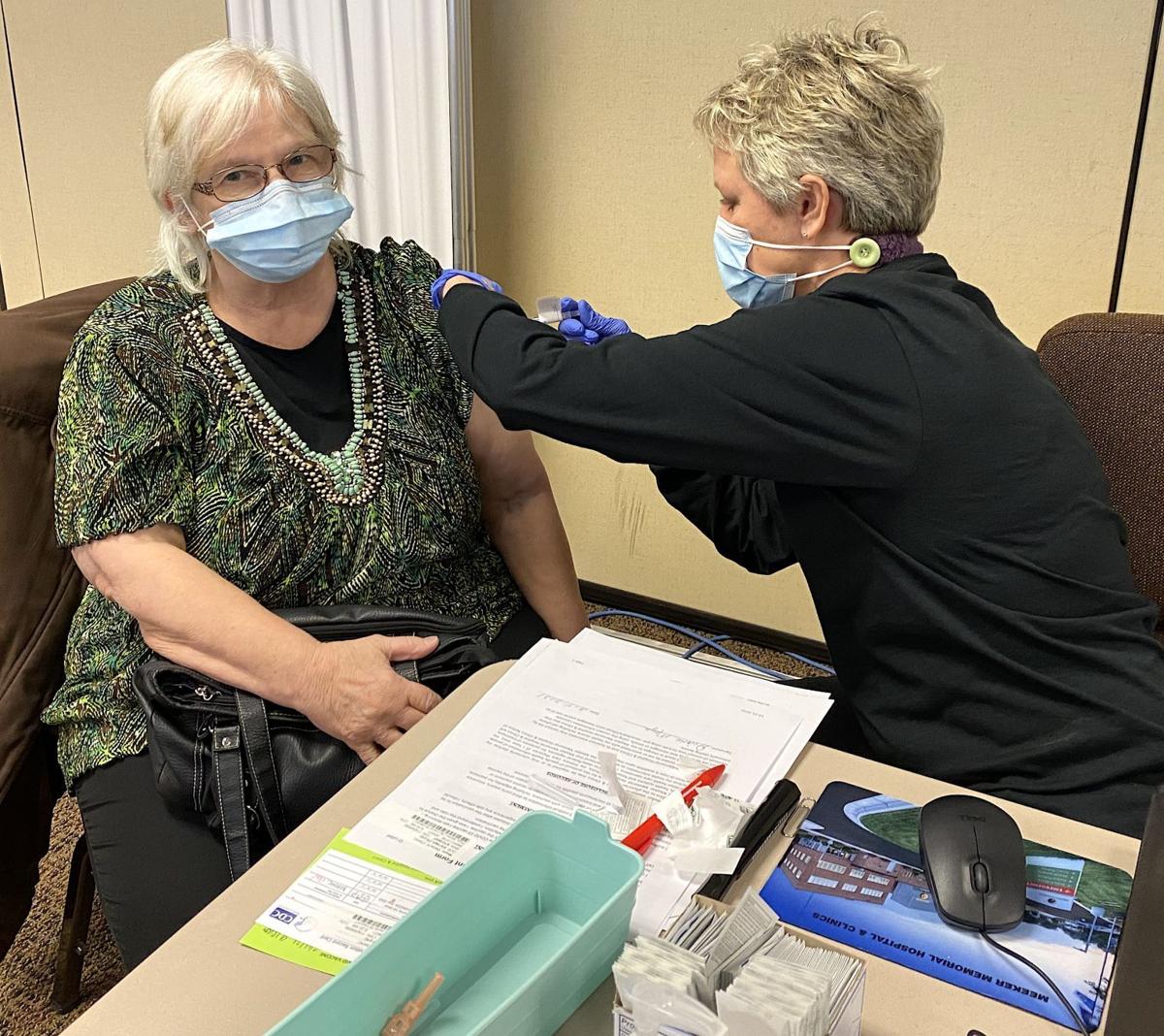 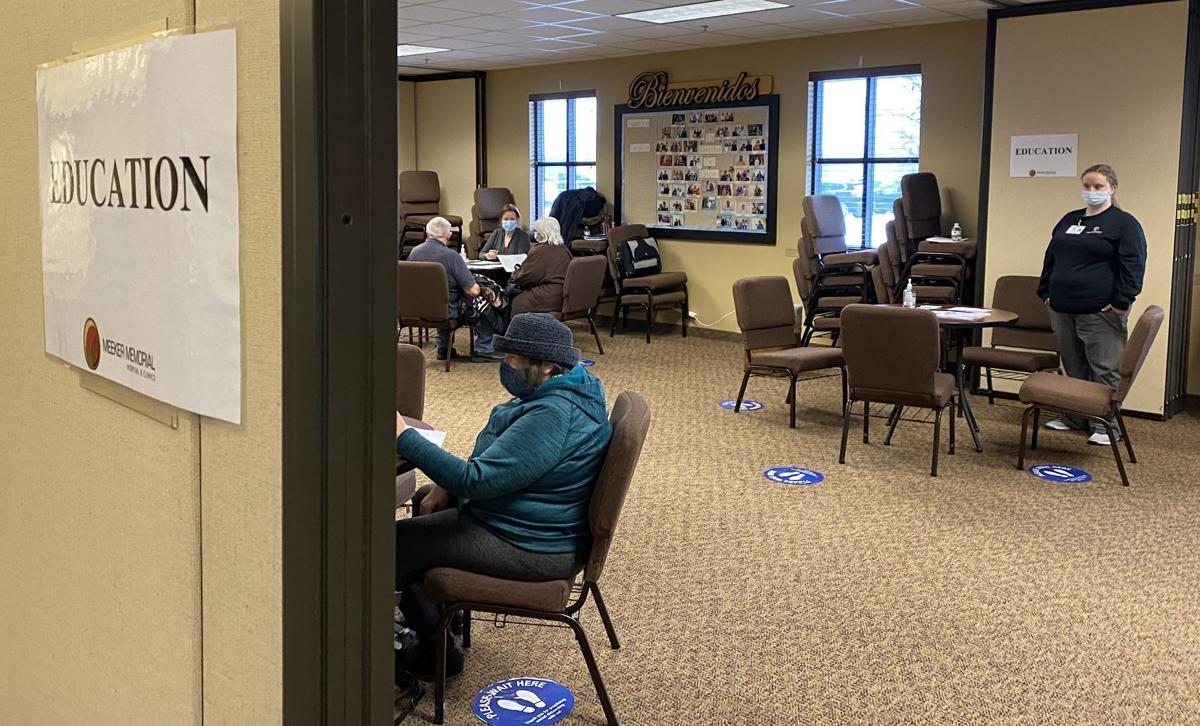 Organizers of the vaccination clinic last week set up eight stations, from checkin-in to recovery, which led recipients through the process, ensuring they received all of the information they needed regarding the vaccine. 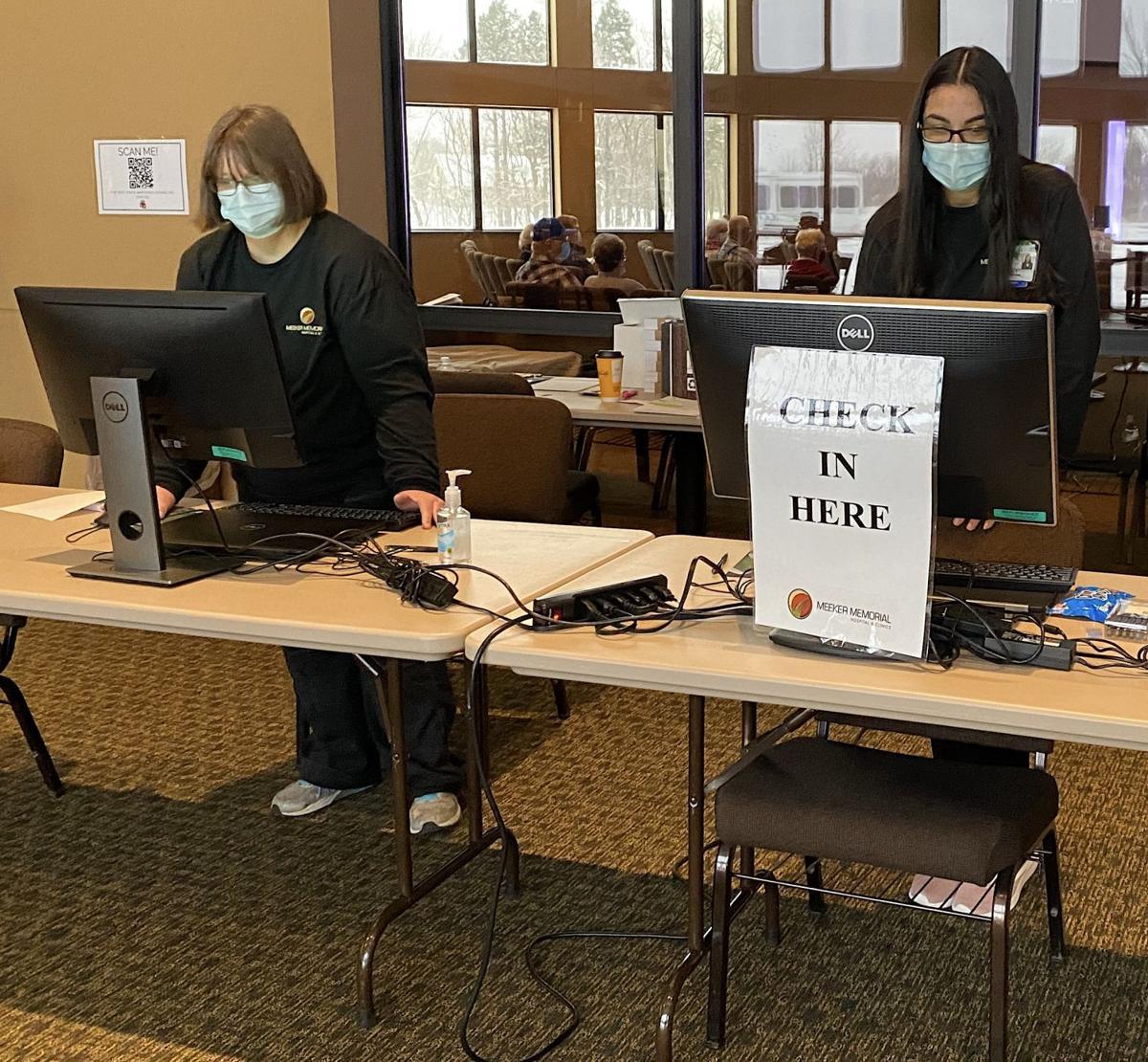 Meeker Memorial Hospital and Clinics staff waited at the check-in station during last week’s coronavirus vaccination clinic. During the three-day clinic, 700 vaccinations were given. 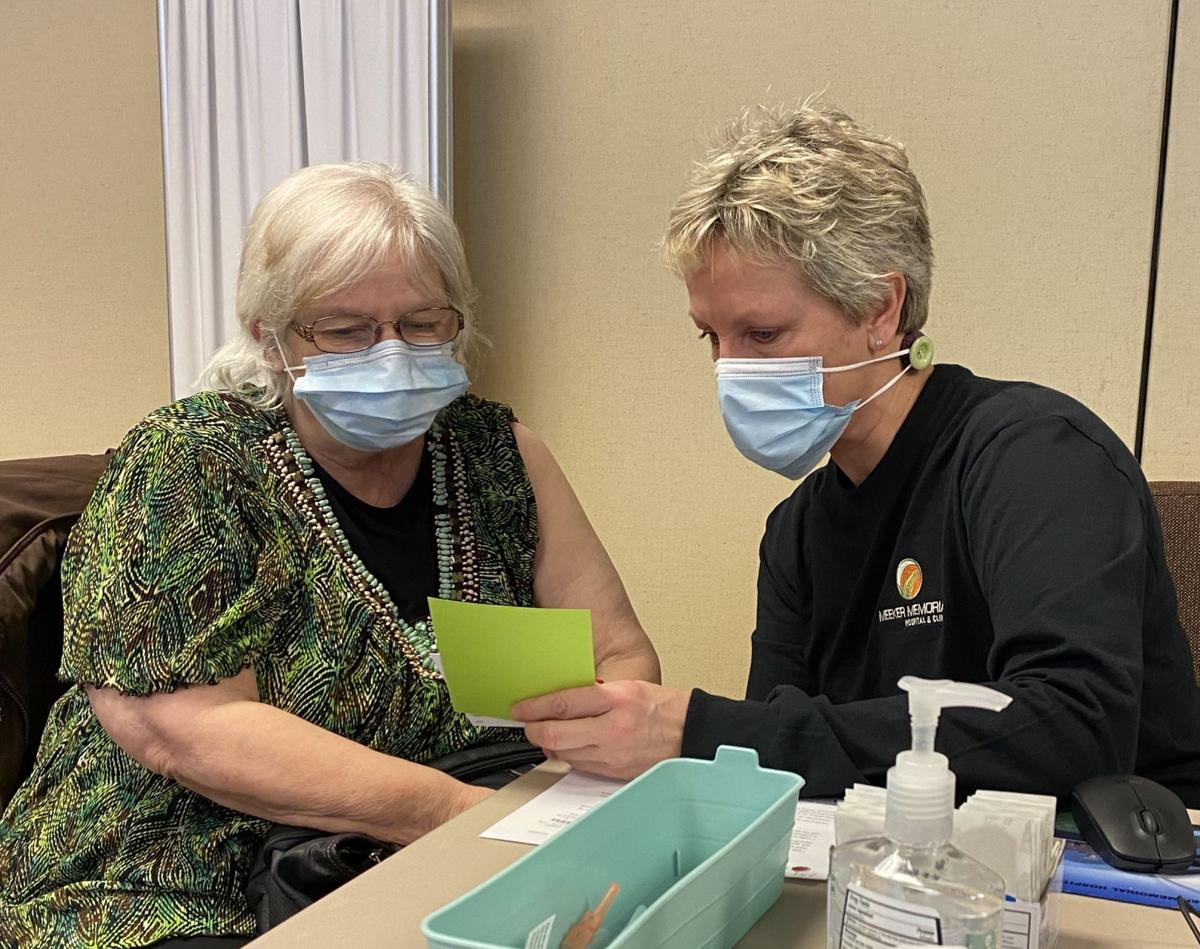 Organizers of the vaccination clinic last week set up eight stations, from checkin-in to recovery, which led recipients through the process, ensuring they received all of the information they needed regarding the vaccine.

Meeker Memorial Hospital and Clinics staff waited at the check-in station during last week’s coronavirus vaccination clinic. During the three-day clinic, 700 vaccinations were given.

Diane Meyer “didn’t feel a thing” as she rolled up her sleeve and received her coronavirus shot in the makeshift “vaccination station” Thursday at Cornerstone Church in Litchfield.

In fact, the Eden Valley resident teased, she had to confirm with her nurse that she actually received her dose because it was so painless.

“It was easy,” Meyer said as she and her husband, who also received his vaccination, headed to observation area. “And fast.”

That was just the kind of experience health professionals were aiming for when they prepared for the vaccination clinic late the previous week.

But what appeared a smooth-running event Wednesday through Friday last week, took the kind of crisis management for which Meeker County health-care workers have been planning for several months.

“The amount of work behind the scenes that had to be done to get this set up … it was incredible,” Holmgren said. “We needed it to run well.”

Rollout of the vaccination has faced communication and distribution challenges, much of it due to limited availability of the drug. In Minnesota, the Department of Health reports that 554,102 Minnesotans — 9.8 percent of the state’s total population — have received at least one dose of a coronavirus vaccination. Meeker County’s vaccine distribution is slightly better than the statewide total, with 2,558 residents, or 11 percent of the county’s 2019 population, having received at least one dose, but far behind the nearly 32 percent vaccine rate in northeastern Minnesota’s Cook County.

So when the state Department of Health called on a Friday afternoon, Jan. 29, and asked if the county could handle 700 doses, Meeker Memorial Hospital & Clinics administration were determined to find a way to get the vaccine to the county’s most at-risk population.

In a seven-hour period Sunday, two days after the offer, MMHC staff members made appointments for 525 vaccinations.

“I get goosebumps, because they were incredible,” clinic administrator Jayne Holmgren said of the team of 10 receptionists who worked off a call list created from MMHC’s 75-and-older client lists. “They gave up their Sunday family time … because they know how important it is.”

When notice was posted on the Department of Health website Monday that MMHC received 700 doses for a vaccination clinic, they began receiving calls from people outside the county, and once Meeker Memorial staff were satisfied they had done everything possible to schedule the 75-and-old group, they began booking others in the 65-and-older cohort to fill out all 700 slots.

MMHC learned it would receive the Moderna vaccine, which must be stored at super-cold temperatures and given to patients within 72 hours of leaving the super-cold storage. And once a vial is opened, all 10 doses in it must be used within six hours. It meant precise planning to ensure every one of the 700 doses could be given in the small window of time.

“There’s a lot of calculations that go into this,” Holmgren said. “We have to be very strategic in our planning and scheduling of the patients, because we have committed to not lose any doses. We don’t want to waste anything..”

By Wednesday afternoon, when the vaccination clinic opened at Cornerstone Church, staff and volunteers were ready to make it work — from check-in station to post-vaccination “waiting room” in the church’s worship area. And, actually, the system went beyond those steps, to a welcoming committee that used golf carts to pick up clinic-goers at their cars as they arrived and deliver them back after they received their vaccines.

“I think they (patients) are very much amazed that we don’t have lines,” Holmgren said as she and Ann Lien, chief quality officer and incident commander for Meeker Memorial Hospital, watched people arrive for the clinic Thursday. “We wanted to be very conscious of the age population we’re serving, to not make them wait (and) not having them stand for long periods.”

Ensuring a smooth-running clinic that used every drop of vaccine was important, Lien said, because future distributions would likely hinge on success of last week’s clinic.

“If you’re not meeting these guidelines or expectations that the state sets, (it) determines what you will get the next time,” Holmgren said.

As they watched Thursday, Holmgren and Lien expressed confidence that the work done by the Meeker County Hospital and Clinics team would ensure future clinics – in addition to the follow-up clinic and second dose in four weeks for those who received vaccines last week.

As vaccination availability increases, they want to be ready. It’s all part of fighting the virus that was first confirmed in the United States in January last year and has infected more than 27 million people, killing more than 463,000.

“They’ve said this before, and it is so true,” Holmgren said. “This is not a sprint. This is a marathon. We have been on a marathon run for the last year. And now we will continue that marathon with the vaccine.

“Patients just have to be patient,” she added. “We will get more vaccine, and we’re going to come to their needs. We’re here.”