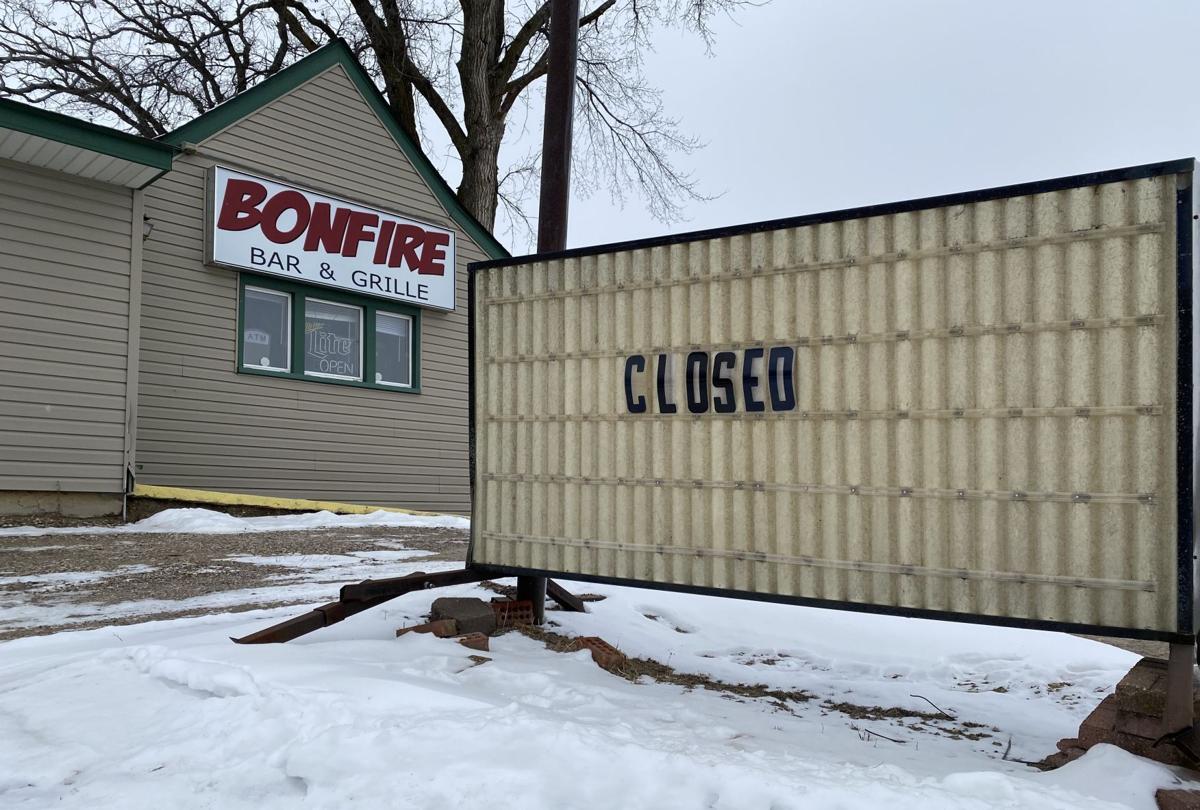 The Bonfire Bar & Grille along State Highway 22 near Litchfield closed in late January. 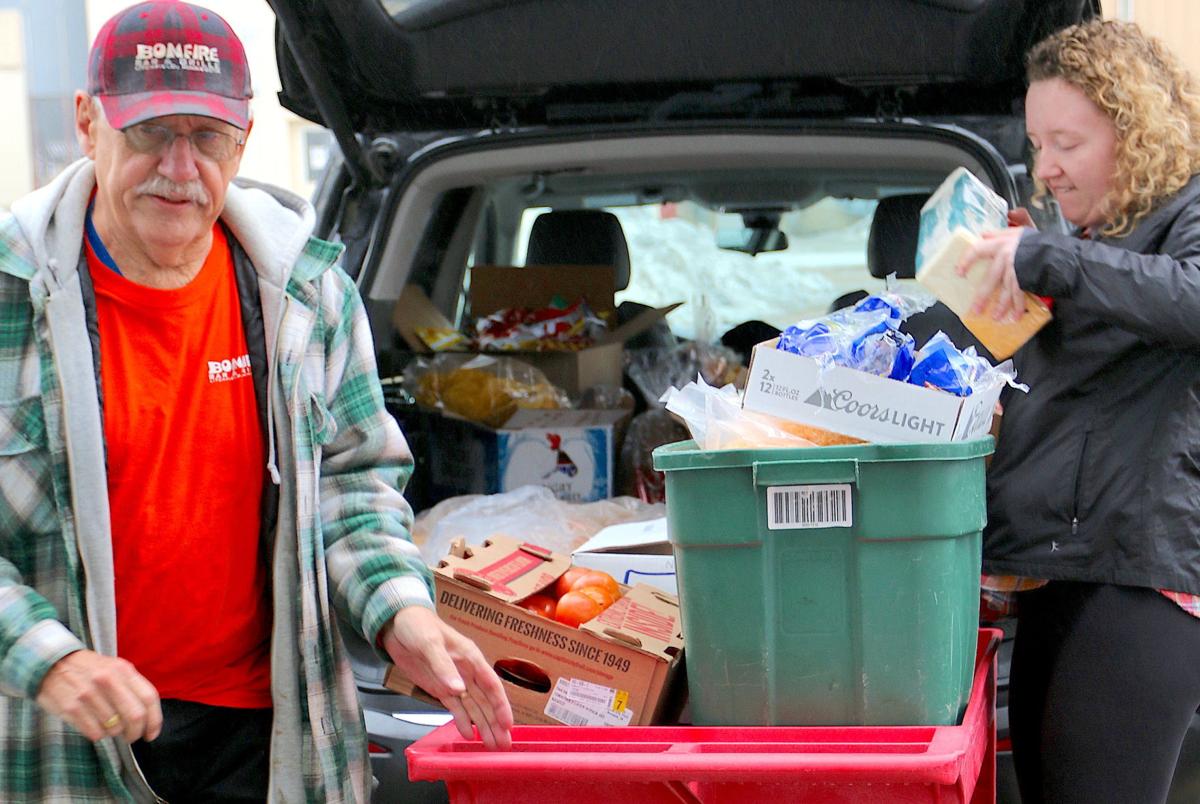 Dick Burgart and granddaughter Cecilia Vaillancourt, owners of Bonfire Bar & Grille, delivered about 745 pounds of food to the Meeker Area Food Shelf last March when restaurants around the state were closed due to COVID-19. Although Bonfire took a hit from the pandemic, Burgart stressed that restrictions were not the reason the restaurant is closing.

The Bonfire Bar & Grille along State Highway 22 near Litchfield closed in late January.

Dick Burgart and granddaughter Cecilia Vaillancourt, owners of Bonfire Bar & Grille, delivered about 745 pounds of food to the Meeker Area Food Shelf last March when restaurants around the state were closed due to COVID-19. Although Bonfire took a hit from the pandemic, Burgart stressed that restrictions were not the reason the restaurant is closing.

If you're looking to generate comments on social media, all you have to do is announce the closing of a favorite tavern and that will do it.

After almost 16 years of ownership, the Dick Burgart family posted on Facebook this past week that they were closing the Bonfire Bar & Grille in rural Litchfield. The response was rapid and heartfelt. Fans bemoaned its passing, reminiscing about good times and favorite meals such as prime rib night and the best chicken strips and steaks.

Although many may attribute the business' demise to Gov. Walz's mandate that closed restaurants during the holiday season, Burgart said that wasn't true. It was a more mundane reason — their kitchen manager gave notice and that was it.

“We were forced to close May 16 to June 10 and Nov. 20 to Jan. 10,” Burgart lamented. “Although the closures had a huge impact on us, that's not the reason we closed the bar. It had nothing to do with that. As I said in one of my posts on my Facebook page, my kitchen manager wanted to pursue other things. I don't cook and I never cooked. I didn't want to know what went on in the kitchen. We had the determination when she wanted to leave, we decided to close.”

It was never on Burgart's wish list or radar to own and operate a restaurant. His background was in financial services. It's what brought his family to Hutchinson in February 1975, when he was transferred here by Community Credit to take over when Bud Maynard left. From there, he went to First National Bank, which later became Marquette Bank and then Wells Fargo. He stayed 10 years. After that, he took a year's sabbatical to try something new. He worked in the computer field for Jerry Cornell and Duane Hoversten. In 1985, he returned to banking at First Federal. He retired in 2005 when Firststate Federal was sold to MidCountry Bank.

Suzanne's career was in education. She taught in Winsted and then in Hutchinson as a special education teacher. About the last 10 years of her teaching career she was a team teacher of ninth grade humanities at the high school.

Neither of them were looking for a new challenge but stepped up to help their son, Justin, when he bought the Bonfire on April 1, 2005.

Suzanne decorated the place and Dick pitched in to help one or two days a week. This changed with Justin's death Nov. 12, 2013. They stepped into run it.

They employed 11 people most of their tenure, including four cooks and seven bartender/servers, plus Dick.

“It's been a great experience,” he said. “As much as I preferred not to do it, it was a good experience. No qualms about it. We've had some wonderful, wonderful patrons. We appreciate everything they've done.”

Burgart credited the rural eatery's successful to the quality of its food and the customer service provided by the staff.

“I could find a new kitchen manager and all the help, but it wouldn't be the same,” he said. “It wouldn't meet my expectations. So, we just made the decision. We've been trying to sell the bar for five or six years, with no real interest. I have to say since we closed on Monday, interest has been coming from everywhere. If there are any legitimate buyers out there, I'm certainly willing to listen to people.”

Trust is important in relationships, and the Burgarts trusted their staff. So much in fact that they were able to pursue a favorite pastime.

"Because the staff we've had, Susie and I have been able to travel as much as we wanted to," Burgart said. "We've done a lot of traveling the last six to seven years. We've had enough confidence in our staff that we were able to go. I could do payroll remotely and bookkeeping remotely. We would go for a month at a time, California, Hawaii a couple of times. We were able to go pretty much when we wanted to. You don't find that level of commitment in your staff very often."

While he readily admits he'll miss a lot of the people, he won't miss the people who tried to come in the door without a mask.

"I'll miss the fellowship," he added. "We have some loyal, loyal patrons that love to come there. I never thought I'd be the local watering hole/post. It's been great.”

In the bar, the most popular drink was Captain Morgan Rum. They sold more of that than anything else.

“What amazes me, as much as we have traveled, brandy is a Midwest drink,” Burgart said. “We sold a lot of E&J Brandy. When we visited California, they don't have brandy. That's been my experience in many places. At the Costco liquor store in California, you might not find brandy.”

For beer drinkers the preference was for Michelob Golden Draft and Coors Light. They were the Bonfire's biggest sellers.

On the restaurant side, the most popular item on the menu pre-COVID was the salad bar. Also in demand was prime rib on Friday night and their burgers.

"People always liked our burgers," Burgart shared. "Last week on Saturday I think it was, I had four young men sit at the bar and each had a steak sandwich. The one who was the king pin said it was the 'best steak sandwich in the world.'"

For a small place, the Bonfire had a fairly large menu. Big sellers were the walleye sandwich, steak sandwich and all the burgers. Burgart admitted to being astounded by the number of people who ordered chicken fingers.

"Everybody's tastes are different," he said.

From the beginning they bought their buns and hamburger from Lang's Meat Market and then Benny's in Hutchinson. It's one of the reasons Burgart credited for their consistency.

"We tried to do things local as much as possible," he said. "It's been good. Our burgers have been fresh from day one. That's been part of the success."

Their next plans call for selling their house on Lake Minniebelle. The couple lives in a multigenerational environment with their daughter, Heather Vaillancourt, son-in-law, Marc, and grandchildren.

“Marc now works for the Children's HeartLink, a worldwide organization that provides heart care services,” Burgart said. “Their office is at (Edina), and Heather works here. Anywhere in between would be an equal commute. We would like to continue the arrangement. People might think of it as strange, but we found it a very workable situation for us. We've done it since April 2014. It's almost been 7 years. You have to take a poll with the rest of the people, but I think they feel the same. It's been very, very good. Marc and Heather both work and their youngest daughter is a freshman in high school. We can provide some of the transportation needs to make it easier for mom and dad. We love spending time with our children and grandchildren.”

With no bar and restaurant to operate, Burgart is looking forward to doing jigsaw puzzles, crossword puzzles and reading. His favorites: mysteries, action and historical fiction-type stuff. Last year, he read the whole "Outlander" series of about 10,000 pages.

"I learned a lot about the hospitality business," he said. "At my advanced age — 74 this past November — it's the perfect age for retirement."

“Although the closures had a huge impact on us, that's not the reason we closed the bar. It had nothing to do with that. As I said in one of my posts on my Facebook page, my kitchen manager wanted to pursue other things. I don't cook and I never cooked. I didn't want to know what went on in the kitchen. We had the determination when she wanted to leave, we decided to close.”