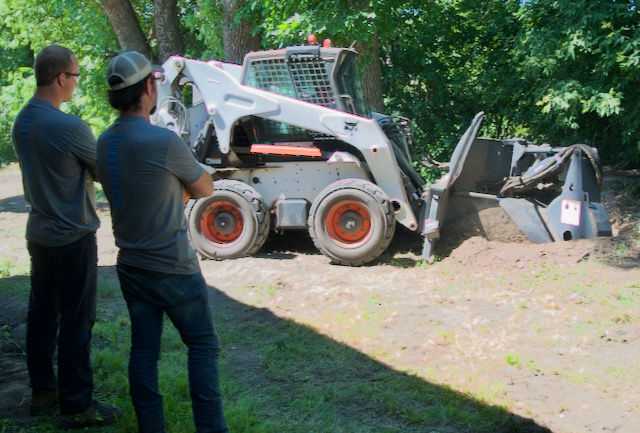 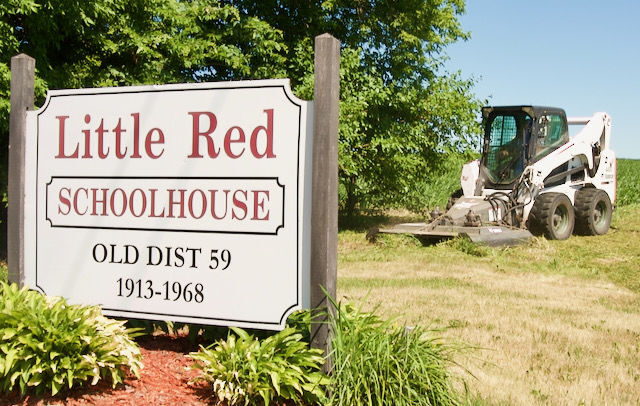 The Little Red Schoolhouse south of Litchfield turned into a showcase for Bobcat attachments last week.

A work crew of 10 employees from the Doosan Bobcat attachment manufacturing facility in Litchfield joined a couple members of the Little Red Schoolhouse volunteer board for a morning of cleanup and repair work June 15.

“It’s called the Doosan Day of Community Service,” Kristie Haefner, human resources manager at the Litchfield plant, said. “We brought a handful of employees out here (who) volunteered a half-day to come out and get done what they needed to get done.

“We have the equipment on site, obviously, so it’s just really volunteering the man hours to help folks out,” Haefner added.

The former country school building and grounds, preserved by a volunteer group since it stopped being used as Greenleaf Township board meetings in 2009, needed some attention, according to Judy Walstad, chairwoman of the Little Red Schoolhouse board of directors.

A large brush pile including debris from a storm that blew through the area in 2017, needed to be cleared, as did the stumps from several trees felled in the storm. In addition, an old cement pad was jackhammered and lawn mowed — all work accomplished by volunteers using Bobcats and an assortment of five different attachments.

“We’re so grateful they’re here today,” said Walstad, who attended the school up to fourth grade, which was 1968. “This is just a fabulous opportunity.”

Charlie Schladeraff, another Little Red Schoolhouse board member, agreed that Doosan Bobcat’s manpower and equipment made a big difference for the volunteer board.

“It just gives us a leg up with the work, the heavy equipment work we’ve had to do ever since 2017,” Schladeraff said. “There was that huge wood pile, brush from the storm down there, and five stumps. We got all that out.”

The board has plans to add a handicap-accessible ramp to the back of the building. Clearing brush and stumps from the property will make that project much more doable.

Doosan’s Day of Community Service is something done at all of the company’s locations in North America, Haefner said. Along with the work at Little Red Schoolhouse, which saw the 10 or so employees work from about 8:30 a.m. to noon, volunteers from the plant’s second shift would be working at the Meeker Area Food Shelf helping with inventory, Haefner said.

“It’s important for us to give back to the community,” Haefner said. “This is something that’s important to our organization. We’ll be doing more of this in the future.”

“The cool part is that the Litchfield facility actually manufactured the attachments,” Haefner said. “So for the employees, even here, to get to see (the attachments) in action, it’s really kind of fun. They make them, they watch it roll out the door, but they probably don’t get to use them. This gave them a chance to use some of the things they make.”

The group’s work at Little Red Schoolhouse was facilitated by Kevin Dietrich, executive director of United Way of West Central Minnesota in Willmar, who lives near the schoolhouse and knew both Walstad and Haefner.

“From the United Way’s perspective, you know, connecting groups — nonprofits and corporations — together, filling those gaps is exactly what we do,” Dietrich said.