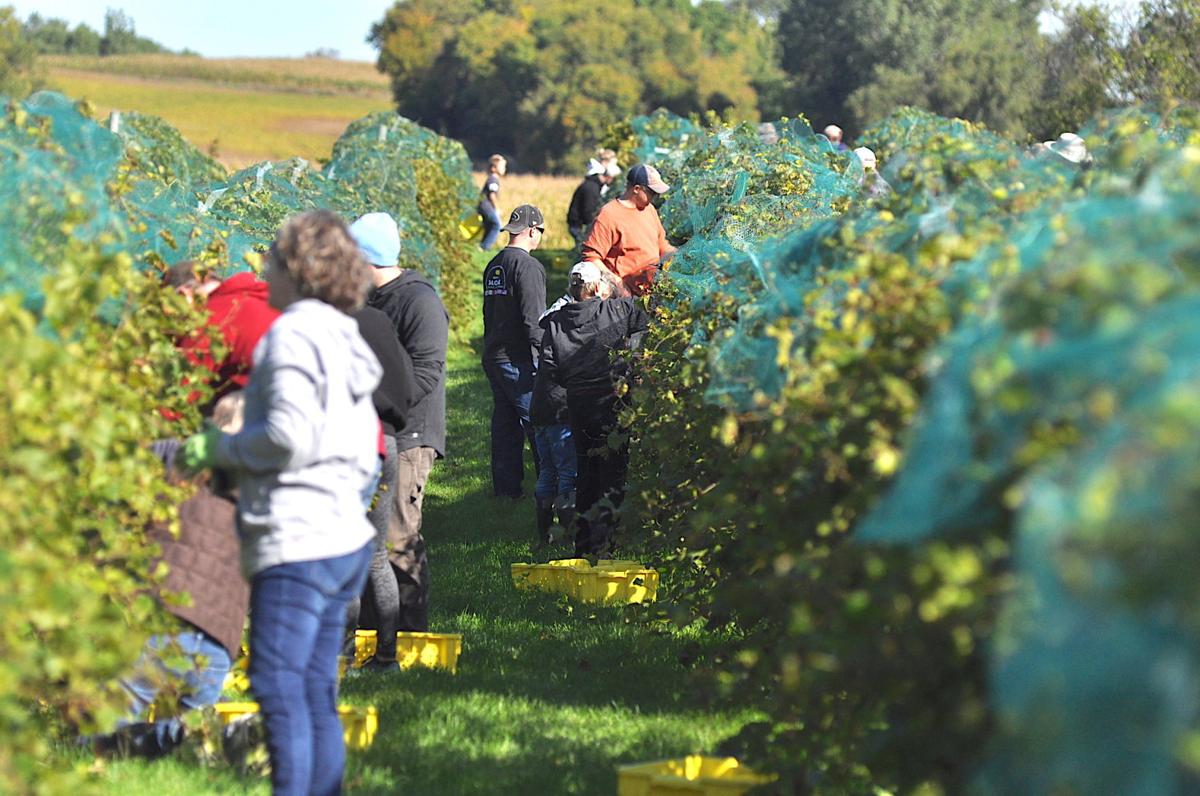 Many hands make light work during the annual grape harvest at Jomas Hill Vineyard. Several dozen volunteers visit the vineyard, about 10 miles north of Hutchinson, every fall to assist with the harvest, as well as make new friends and reconnect with the land. 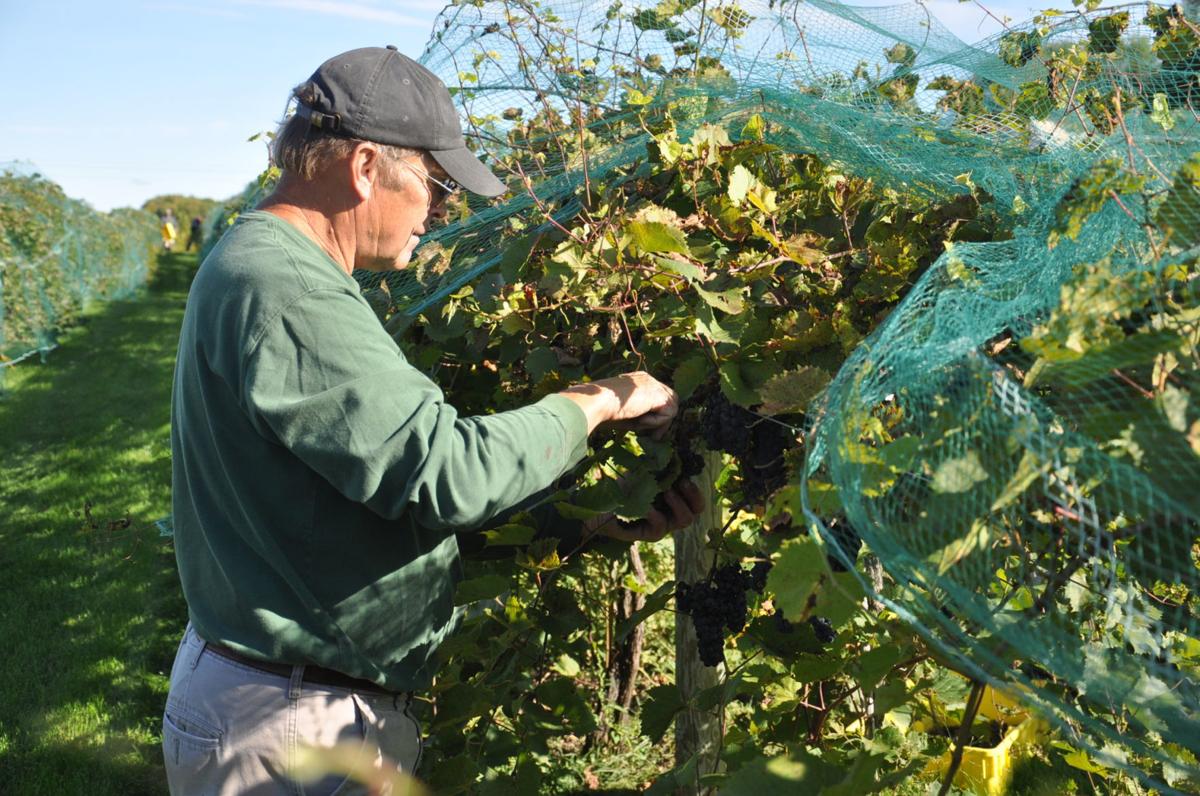 Tom Carlson cuts grapes from the vine during the harvest last month. 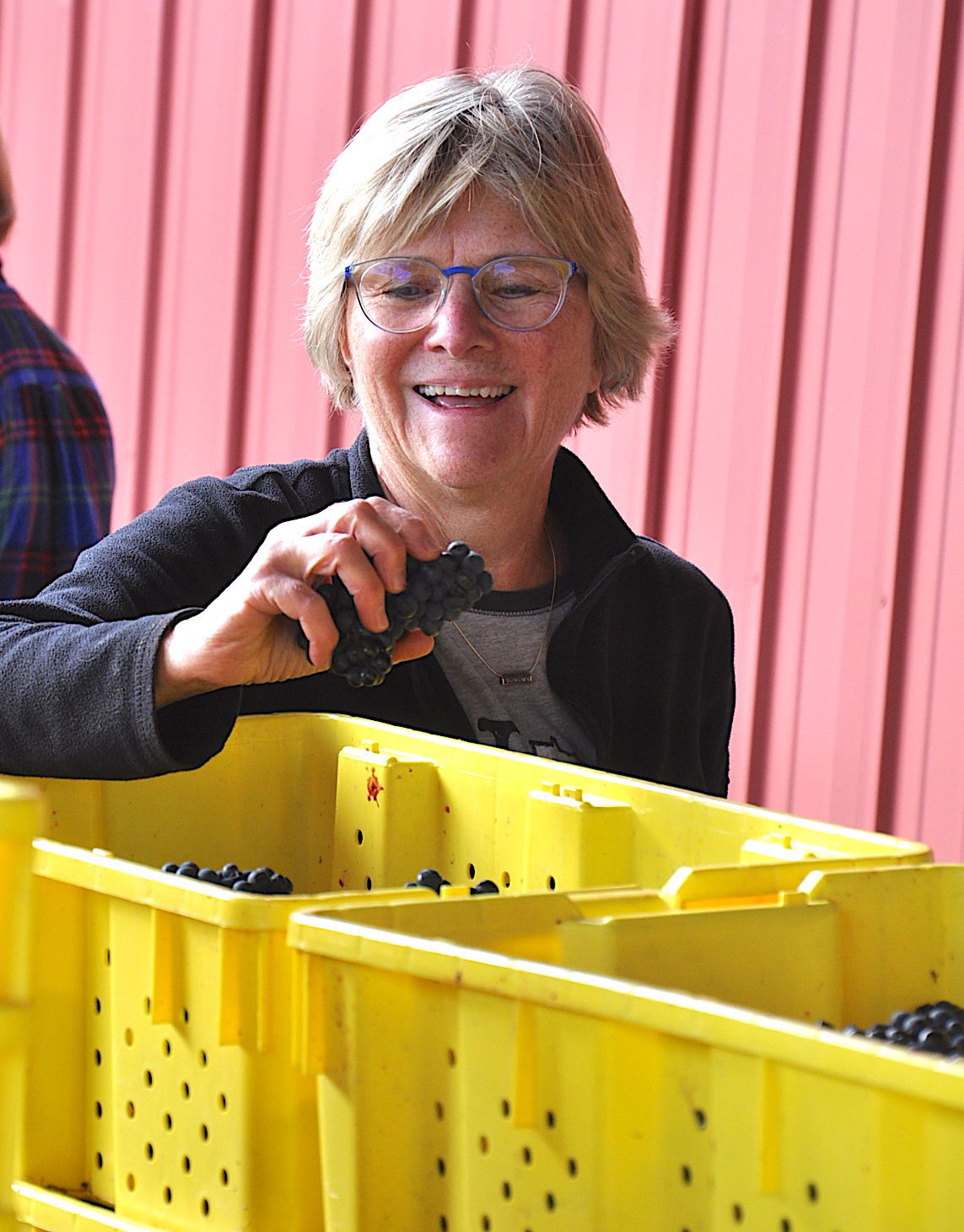 Joyce Carlson checks out some of the grapes. 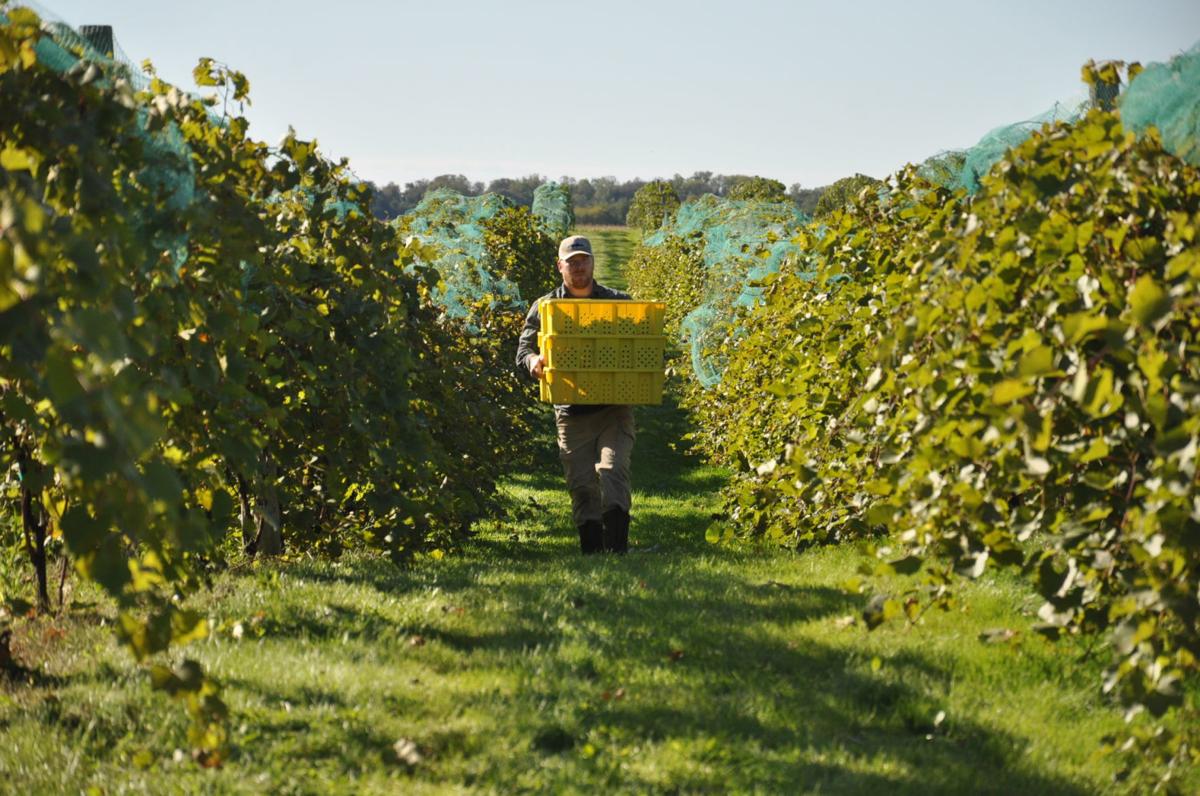 Luke Carlson makes his way between the vines carrying totes filled with grapes. The son of Jomas Hill Vineyard owners Tom and Joyce Carlson, Luke has played an integral role in the vineyard’s success, his parents say. 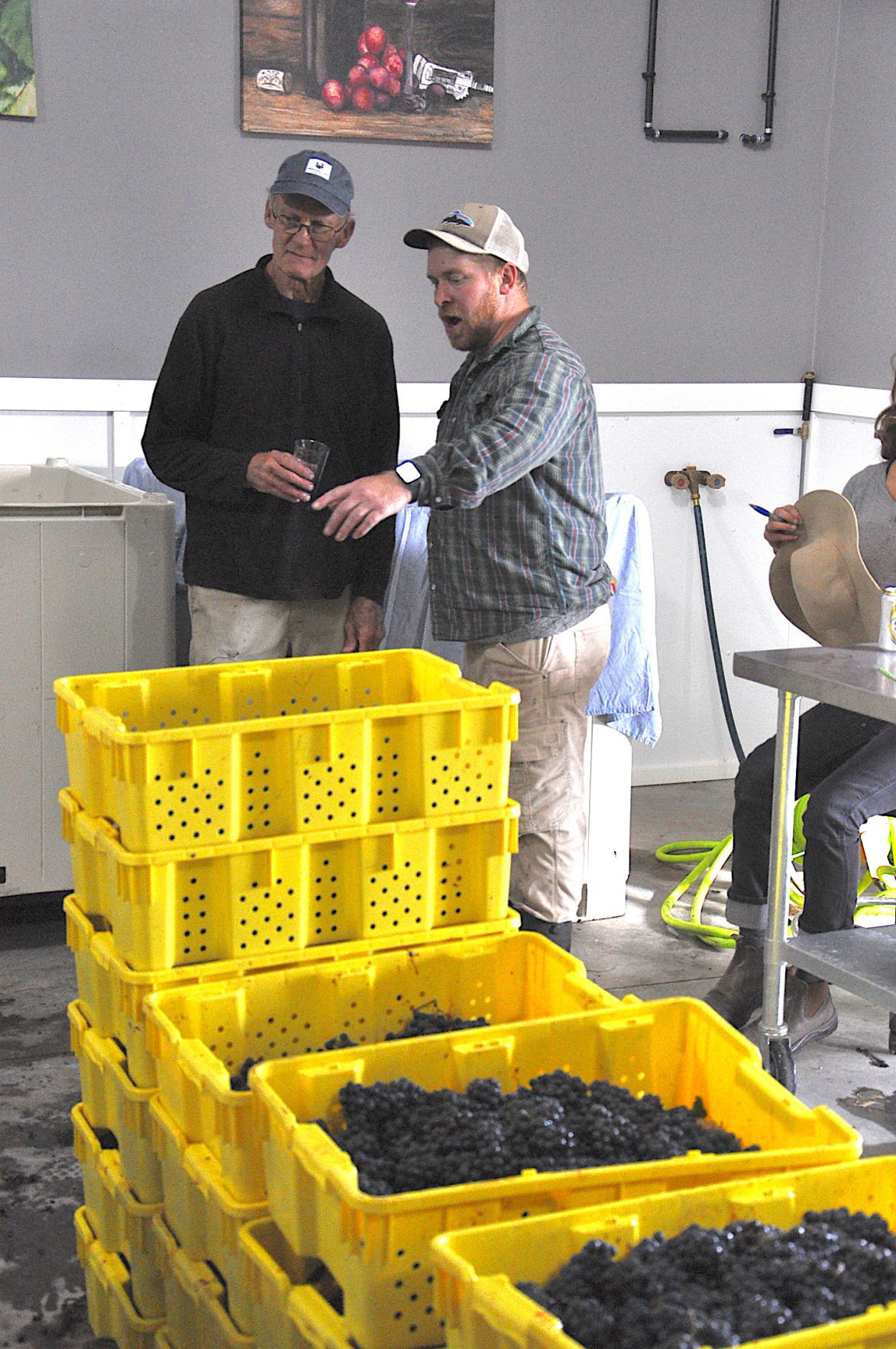 Luke Carlson talks with Jim Haugo, with crates of grapes in the foreground. 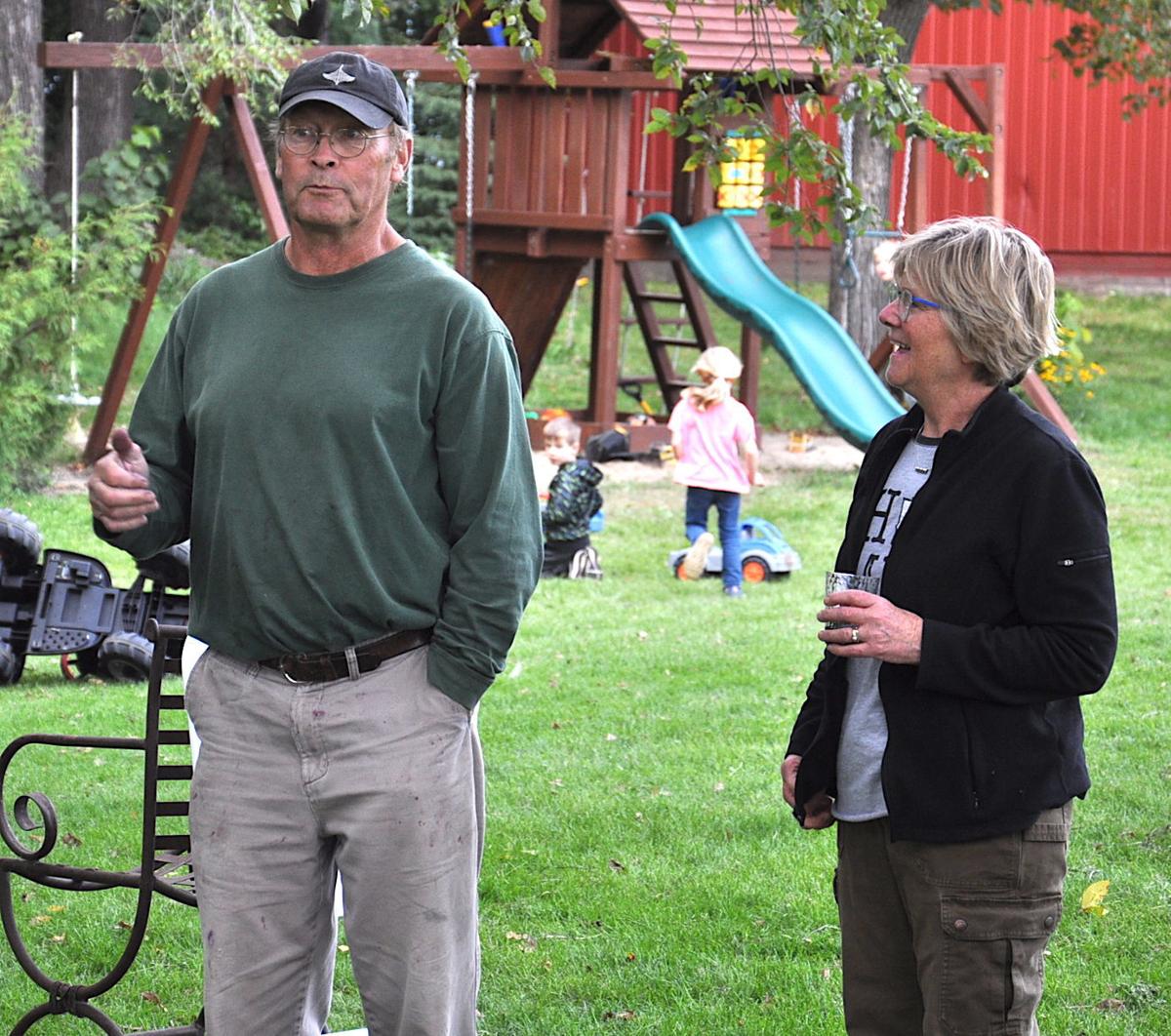 Tom and Joyce Carlson address the crowd of volunteers at the end of the harvest. 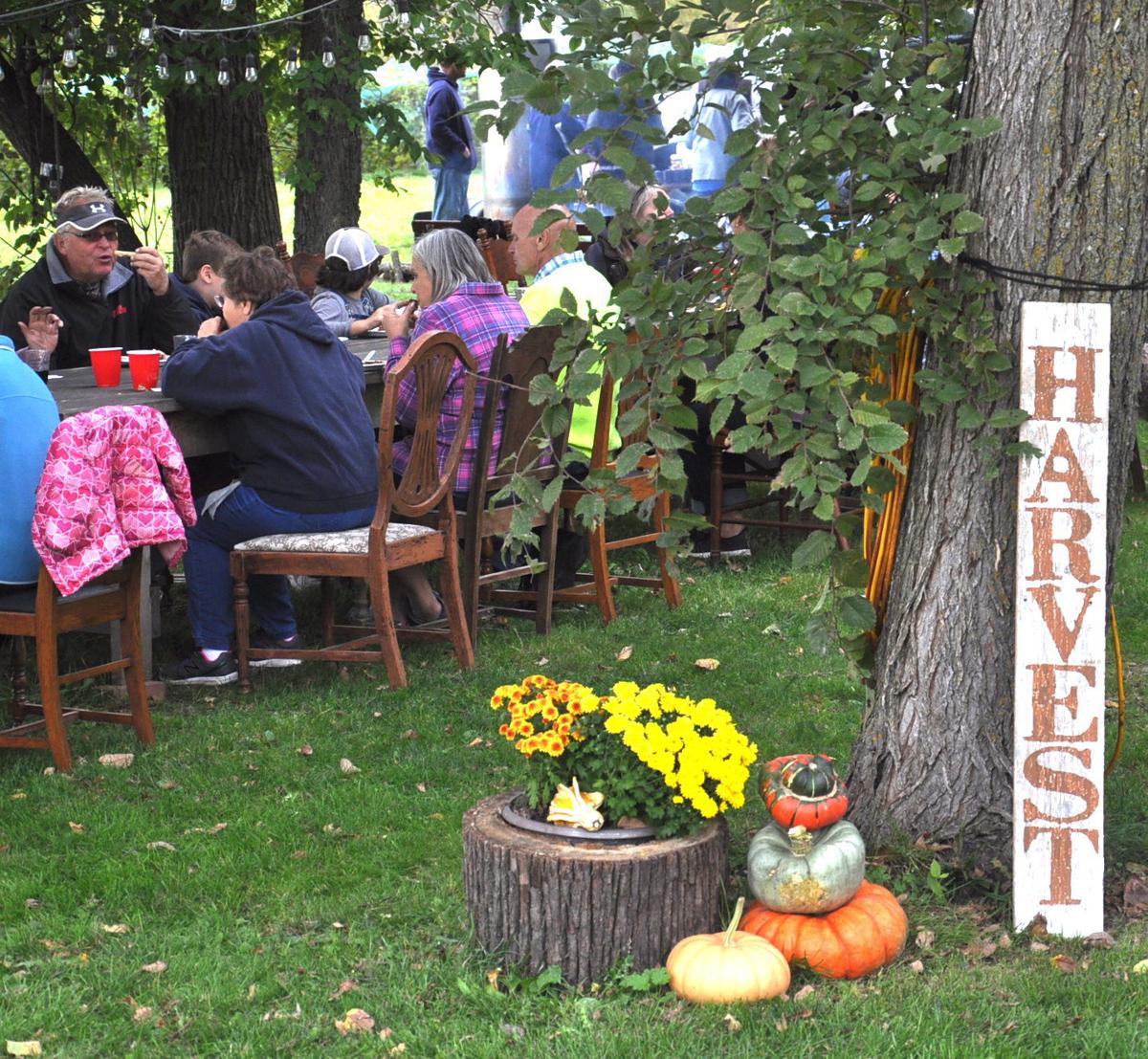 Volunteers eat and socialize at the conclusion of harvest, a literal symbol of the Carlson's "big table." 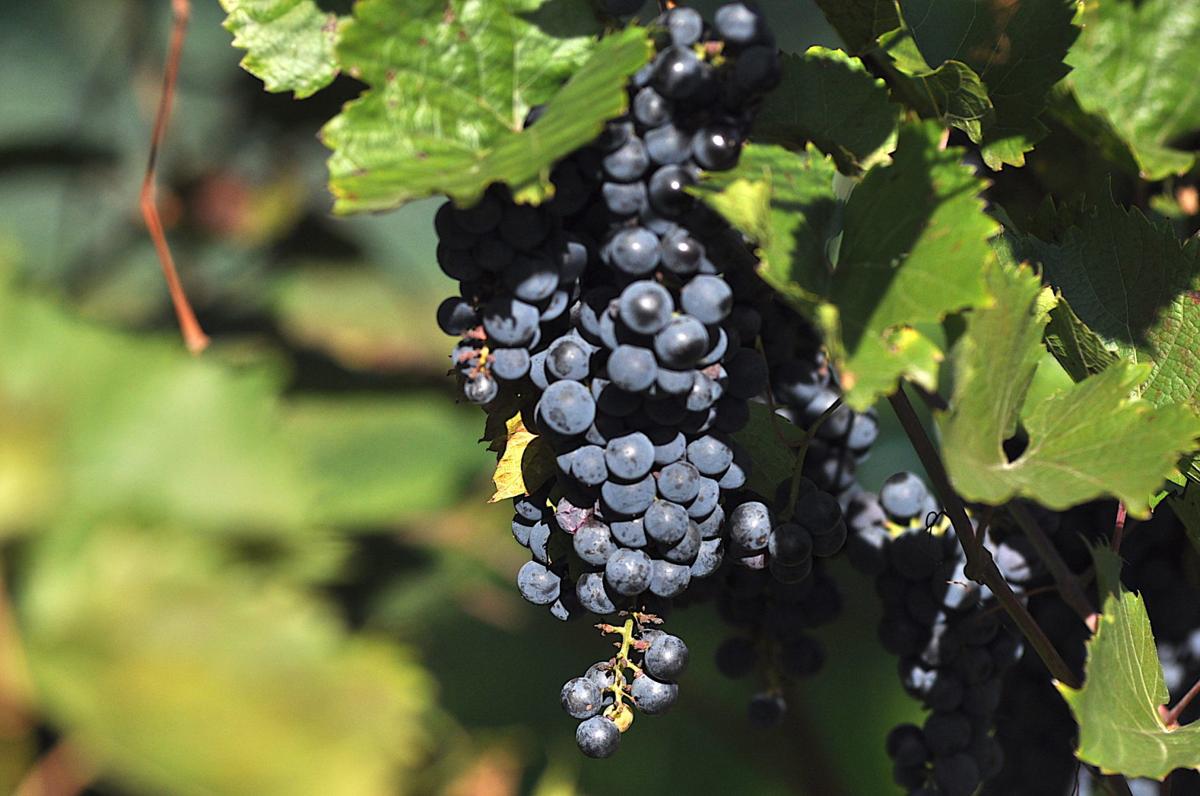 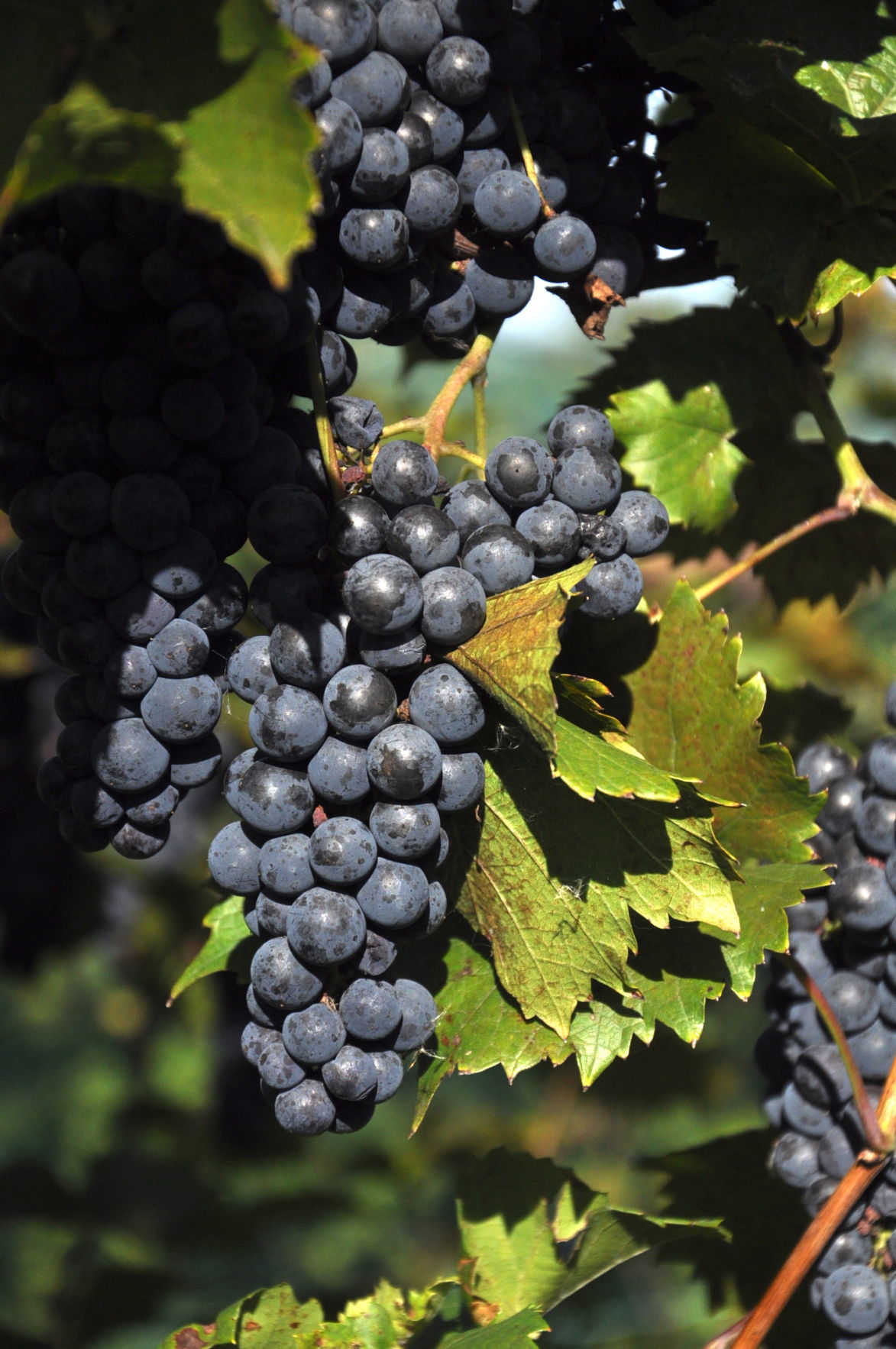 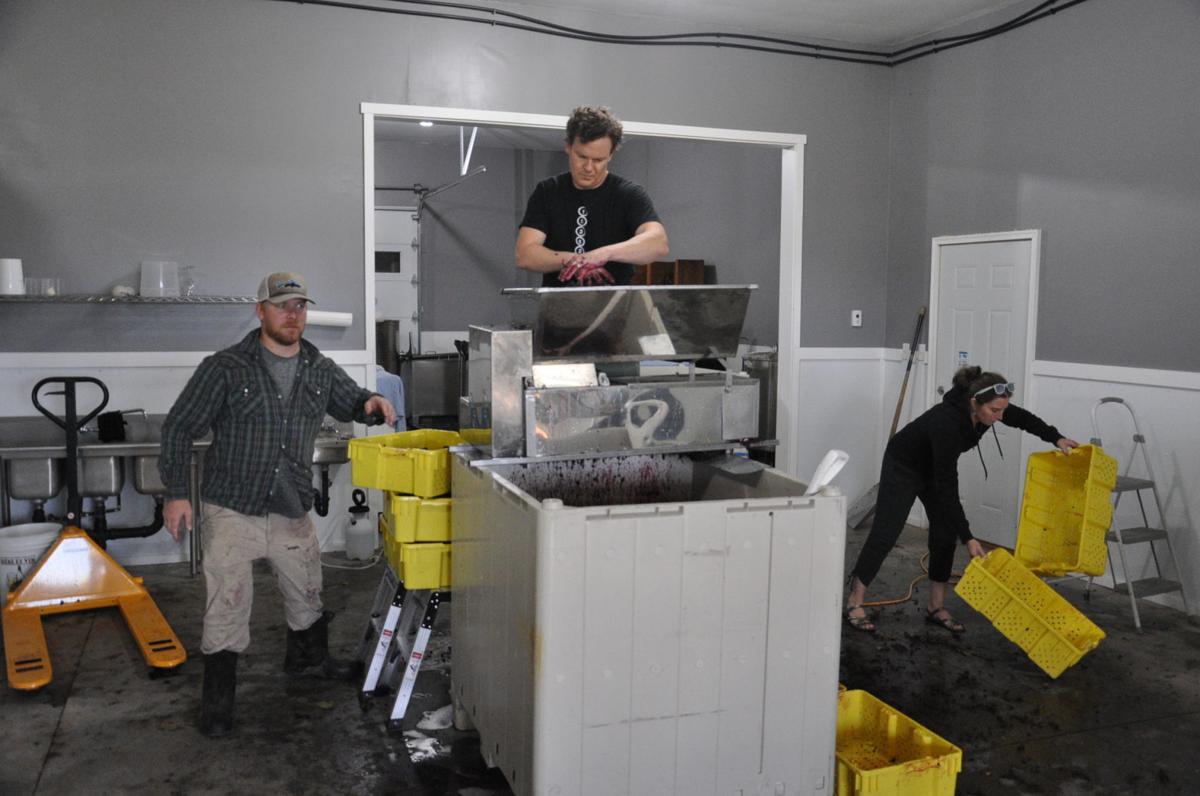 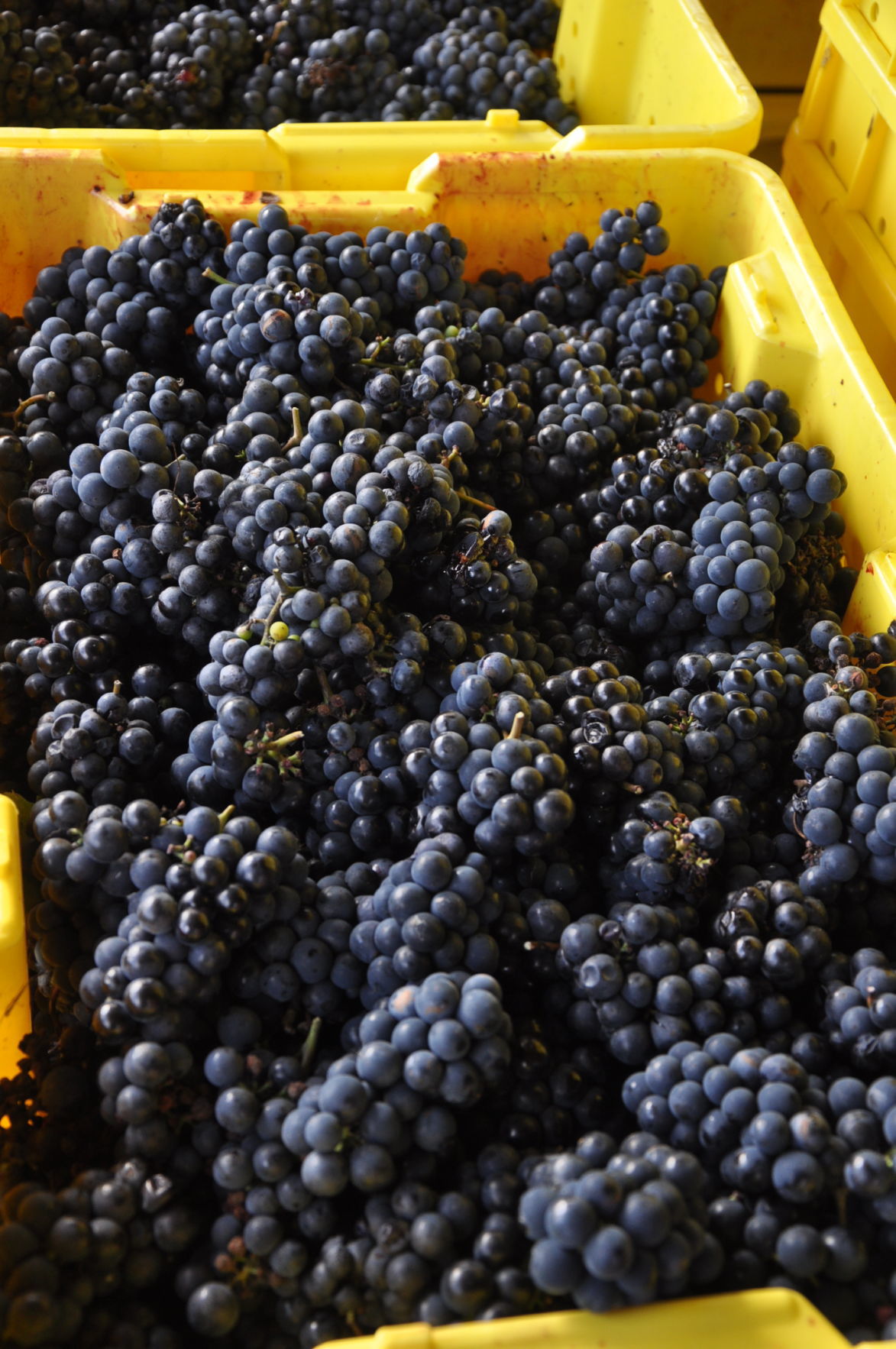 The picked fruit from the volunteers’ labor filled these yellow bins. 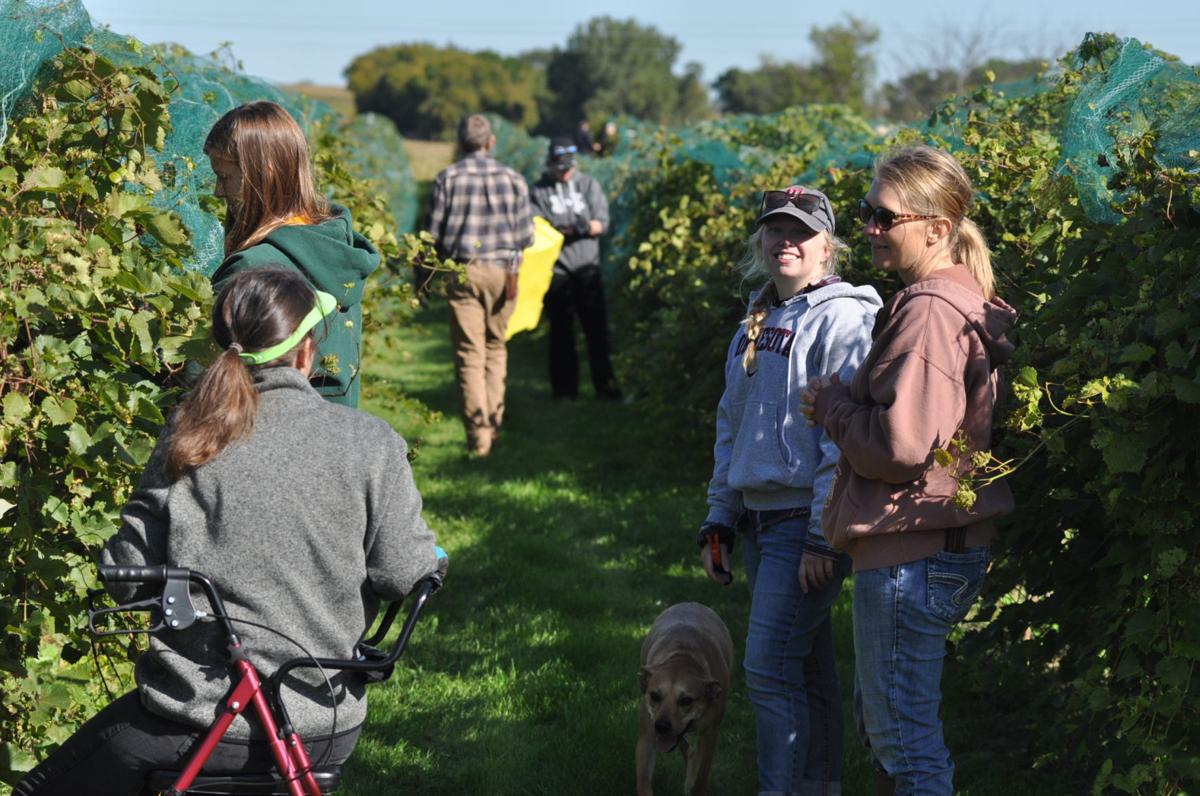 Esther Jordan, right, talks with volunteers in the vineyard. 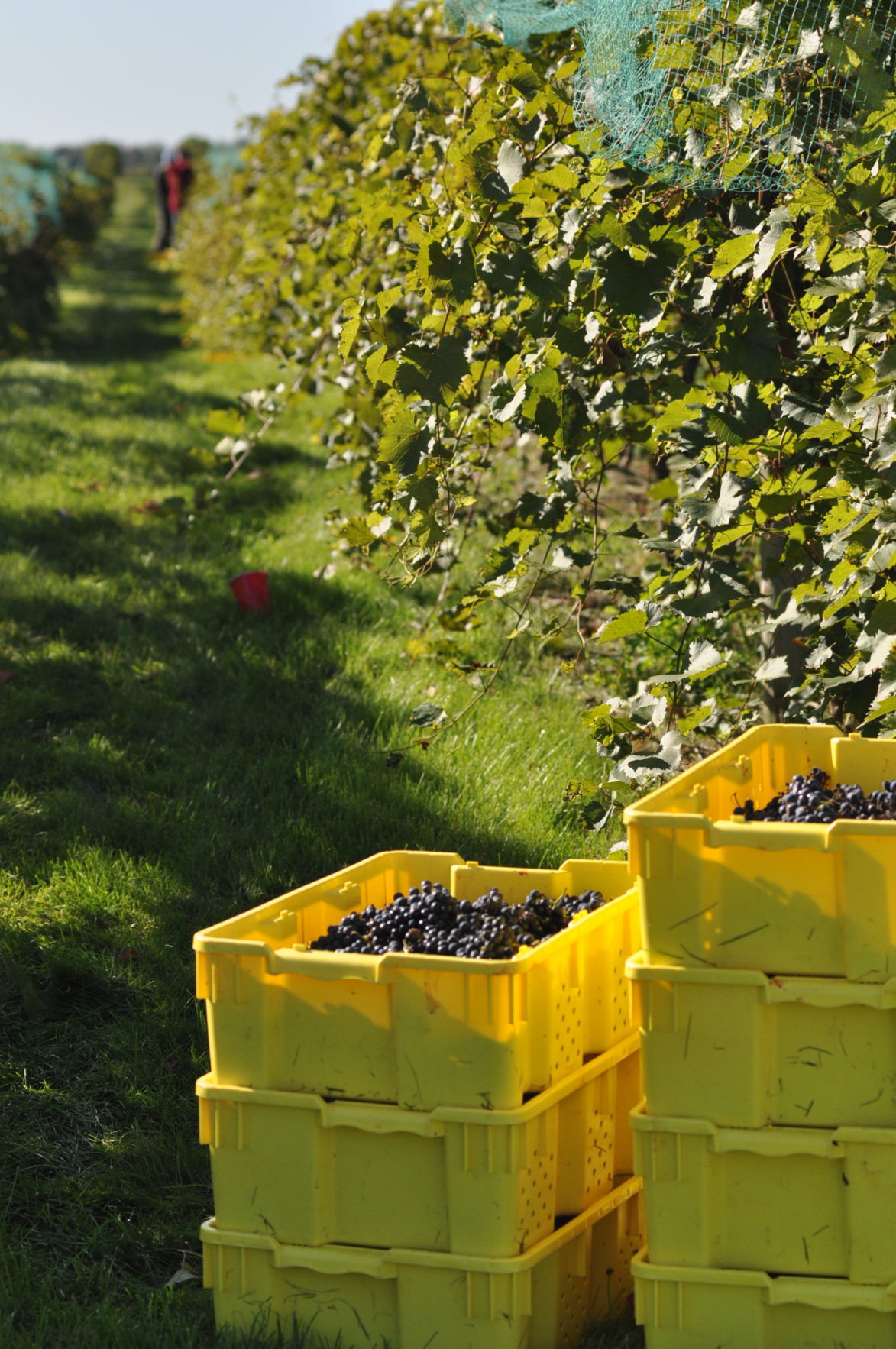 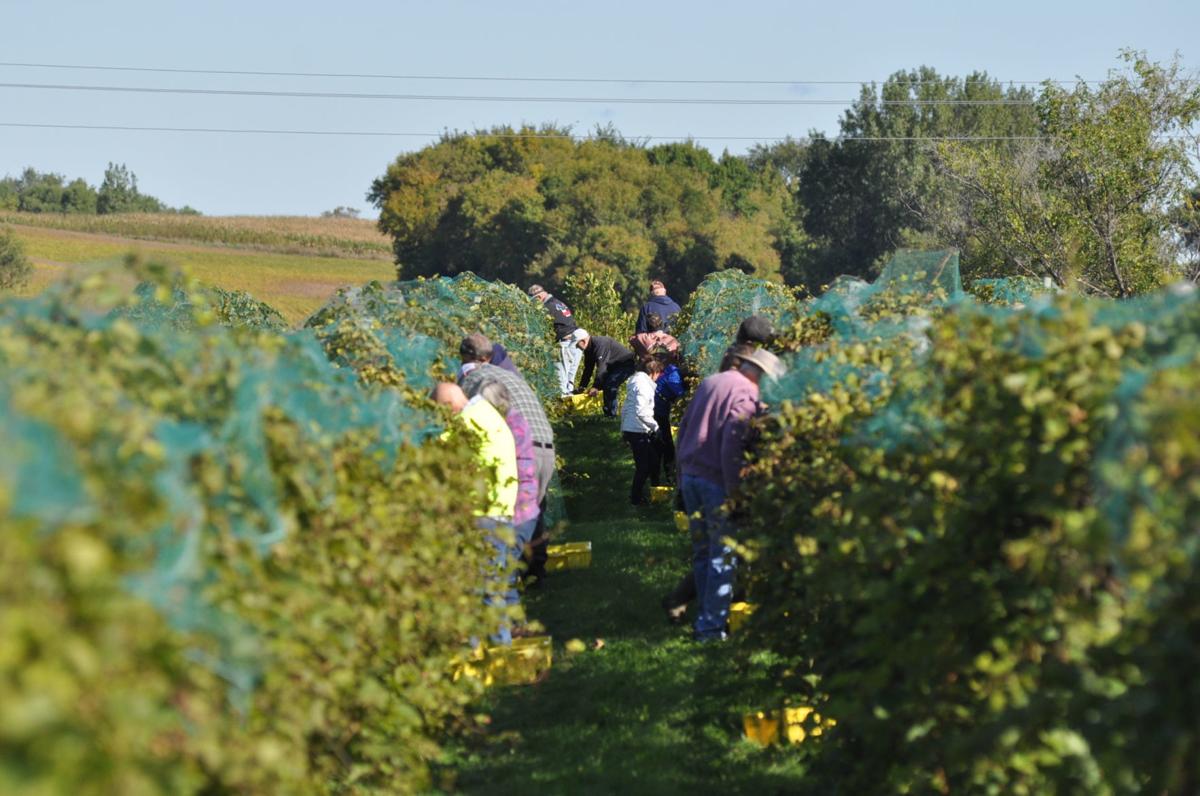 Joyce Carlson checks out some of the grapes.

Luke Carlson talks with Jim Haugo, with crates of grapes in the foreground.

Volunteers eat and socialize at the conclusion of harvest, a literal symbol of the Carlson's "big table."

The picked fruit from the volunteers’ labor filled these yellow bins.

Esther Jordan, right, talks with volunteers in the vineyard.

Idyllic images aside, harvesting grapes can be an arduous, sometimes-monotonous task.

But at Jomas Hill Vineyard the recent harvest resembled more a family gathering than work session.

“Sometimes it’s a little bit on the hard side, the work,” said Tom Carlson, who along with his wife, Joyce, started the vineyard in 2009. “But you never see anybody struggling. They’re all laughing, smiling, talking. Finding new friends, I hope. Renewing acquaintances. It’s kind of cool.”

The vineyard, located about four miles south of Darwin, started as a retirement income project for Tom as he began to ponder life — and financial resources — after his full-time job as a technical agronomist ended.

But it has become so much more during the past decade, evolving from basic vineyard growing grapes for other wine makers, to making their own wine, to a future that holds a tasting room and retail experiences.

So, Jomas Hill Vineyard is likely to continue evolving. That evolution will include the basic premise that Tom and Joyce have had since the early days, that their vineyard will be about family and community.

That’s the case each fall as dozens of friends and family flood the vineyard to gather grapes. This year, that big day was Sept. 28, when more than 70 people meandered through the vines to harvest 8,000 pounds of Marquette grapes and another 2,000 pounds of Petite Pearl variety.

Though that might seem like a lot of work, the banter taking place between the rows of vines indicated otherwise.

“I’ve always wanted to see the process for grape harvest,” Larry Macht of Glencoe said. “And this seemed like it would be fun.”

A friend’s social media post about the Jomas Hill Vineyard harvest drew Macht to the event this year, although he jokingly said it was a letdown when he learned it would not be what he expected.

“When I was growing up, I watched the ‘Lucy Show,’” Macht said, alluding to the popular sitcom’s portrayal (for those old enough) of a grape harvest. “I was disappointed to learn there would be no grape stomping today, because they said no one would want to drink it. I was in the outfit and everything, so I had to go back and change.”

Many in the volunteer force seem motivated to participate by a simple desire.

“People like to come out to the Vineyard and reconnect with the land and the earth,” said the Carlson’s daughter, Esther Jordan, a communications specialist at the West Central Research and Outreach Center in Morris, who also handles the vineyard’s marketing and participates in the harvest. “In this day and age we’ve kind of gotten away from that. We may not all have the resources, space, or energy to have a garden or a small farm, but this place gives people an opportunity to reconnect with the land without the commitment of a garden or farm. It gives them that connection that they’re looking for.”

“It’s fun to listen to people out there,” Joyce Carlson said. “They’re making new friends because they’re talking to people next to them, and they’ll pick up their tote and move and talk to the person across from them. It’s a social gathering.”

The light-hearted discussion continued throughout the day as the grape pickers worked, relaxed, ate and picked some more, until the harvest concluded late afternoon. The day ended with volunteers gathered around tables enjoying a meal and camaraderie.

“We like to talk about a big table. We’ve got a big table,” Tom Carlson said. “It has occurred to us that there’s an opportunity, really, to provide space for community. We welcome everyone to come and sit down and relax and enjoy it and be a part of nature or whatever you’re seeking at the time.”

The annual harvest is just one example of that philosophy. More regularly, people gather at the vineyard on Thursday evenings throughout the summer to take part in yoga sessions among the vines. Offered by Open Sole Yoga instructor Kateri Kormann, the sessions draw between 10 and 35 people, and conclude with social time.

It’s a completely different image from the dairy and crop farm that Jomas Hill used to be.

A minister’s daughter, Joyce Carlson was born in Chicago, grew up in Red Wing, Minnesota, then lived in California, and Minneapolis, before moving to Dassel. That’s where Tom, who grew up on a dairy farm less than 2 miles east of their current home, met Joyce and her family, and they hit it off.

Tom pursued an education degree after high school, and chose to return to the family farm in Darwin to help out after his father had health issues.

He made agriculture his career instead. After purchasing the current farm in 1977, they milked cows for 14 years, and their registered dairy herd provided the name for the future vineyard, combining parts of Joyce and Tom’s (Thomas) names. They eventually transitioned to crop farming, then got into the seed business, and the barn and silo were torn down. Tom was an agronomist for Gold Country Seed for 11 years prior to his retirement last year.

Joyce, meanwhile, worked as a school nurse for the Dassel-Cokato Schools, and later became an advanced practice registered nurse, specialist in wound and ostomy care at Meeker Memorial Hospital in Litchfield.

During his career in the seed corn industry, Tom pondered the future of the farm. He’d earned a master’s degree in agribusiness from Kansas State University, and wanted to use his crop land in a way that was different from what everybody else was doing.

Tom said he has always had a love for the land, whether it was raising animals, planting trees, or growing a crop. In thinking ahead to retirement, he wanted a way to use his acreage that would not only provide extra income, but also give him a fulfilling pastime.

His interest in wine, and the growing wine industry got him thinking, could he grow his own?

It was the kind of outside-the-box idea that had potential, but first the Carlsons needed to find a grape they believed in.

The University of Minnesota’s work in the mid-2000s with a winter-hardy grape known as the Frontenac intrigued Tom, but when he tasted wine made from the varietal, it didn’t suit his palate.

“About 2006, we really started watching,” Tom said. “I planted a few vines just to see what happened. I didn’t learn enough.”

Around the same time, though, he learned about another variety, the Marquette, “and the reports on that were good – good-quality wine.”

“I was starting to enjoy wine a little bit more myself, too, so I thought, if nothing else, we could make our own wine and we’d never have to buy another bottle,” he said with a laugh. “And I could save my money and spend it elsewhere, I guess.”

By 2009, he was ready to take the plunge, and bought about 1,400 Marquette vines from a Red Wing vineyard.

With the help of family and friends, the vines were planted in the same pasture where Tom and Joyce’s registered Holstein dairy cows used to graze. Up on the “hill,” hence the name Jomas Hill, the grapes have thrived over the last 10 years.

“It’s really been evolving,” Tom said. “It’s different than what it started to be when I first thought about it.”

That evolution included the realization — after some house-made wine sampling — that the vineyard offered even greater potential if it expanded beyond simple grape growing.

Tom began experimenting with making his own wine in about 2011, and those trials went well enough to spark additional ideas.

“I started thinking, ‘OK, I think I can make a good wine, one that people would enjoy and pay for,’” he said. “Perhaps there’s something to this.”

Still working full-time, Tom said, expanding was a gradual — sometimes slow — process. They applied for and received the required federal and state licenses, along with seeking county zoning approval. They now have a manufacturing license, and by early next year, they hope to have a retail license that will allow them to sell this year’s harvest beginning next year. Carlson’s son, Luke, works in the home construction industry and is designing and will build the new tasting room within the next year.

It seems to be a steady upward trajectory, as plans for a tasting room adjacent to the vineyard take shape. But, Tom said, they want to maintain the vineyard’s relaxed, low-key profile.

The plans will keep him busy for years to come.

“I want to plant more vines, so I’m going to live forever,” he said with a chuckle. Then with a more serious demeanor he added, “One of the things that you kind of realize is, what can you leave as a legacy? If your son or daughter or grandson or granddaughter want to take over some day, you know, what do you leave?”

“People like to come out to the Vineyard and reconnect with the land and the earth. In this day and age we’ve kind of gotten away from that. We may not all have the resources, space, or energy to have a garden or a small farm, but this place gives people an opportunity to reconnect with the land without the commitment of a garden or farm. It gives them that connection that they’re looking for.”