Lichfield High School marching band makes its way down the parade route during a parade in Montevideo. The Marching Dragons will perform for the last time this season during the Watercade Grande Day Parade Saturday. 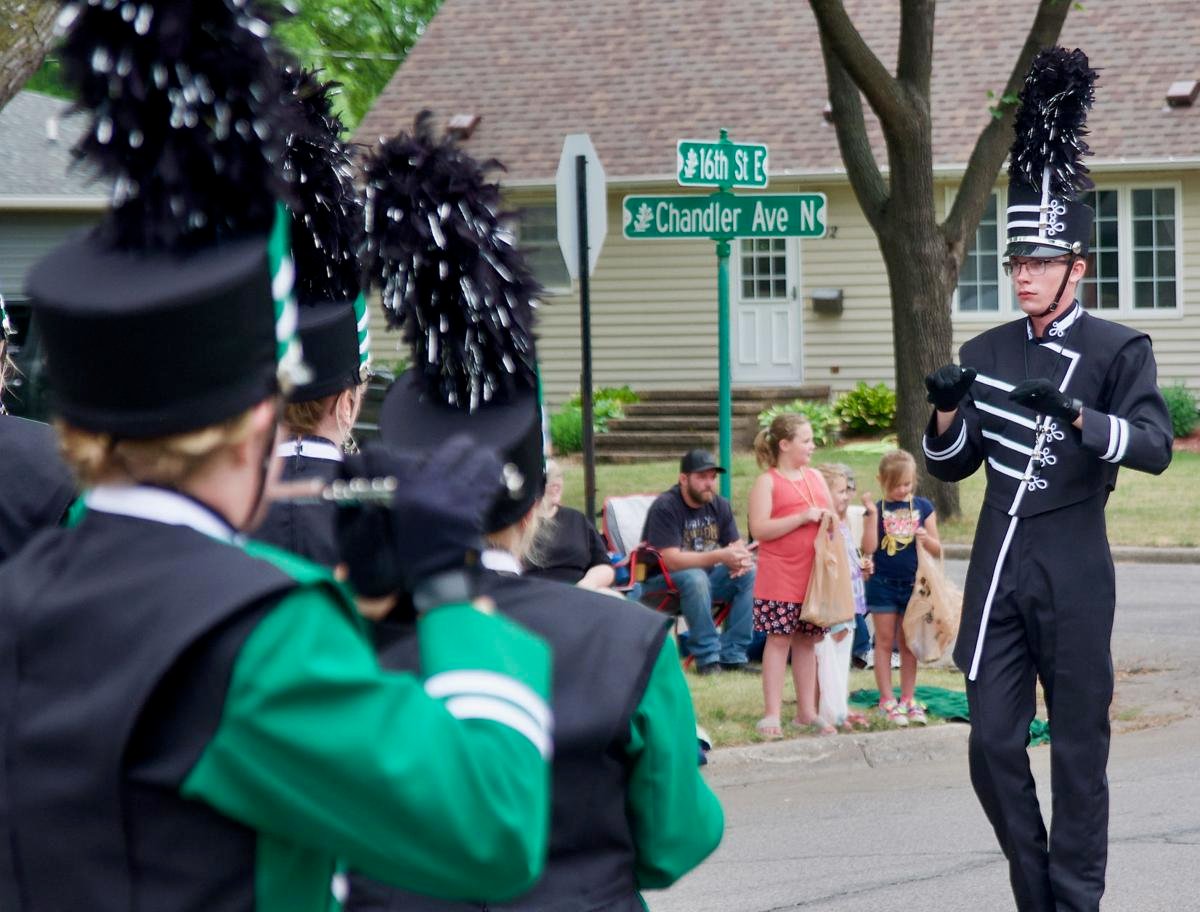 Drum major Sam Dougherty directs the band during its show June 26 at the Glencoe Days parade. 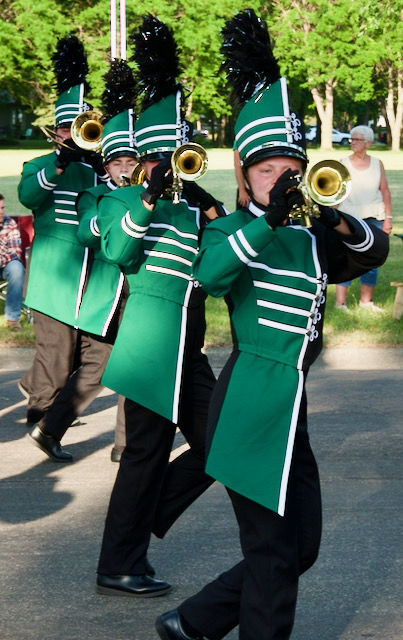 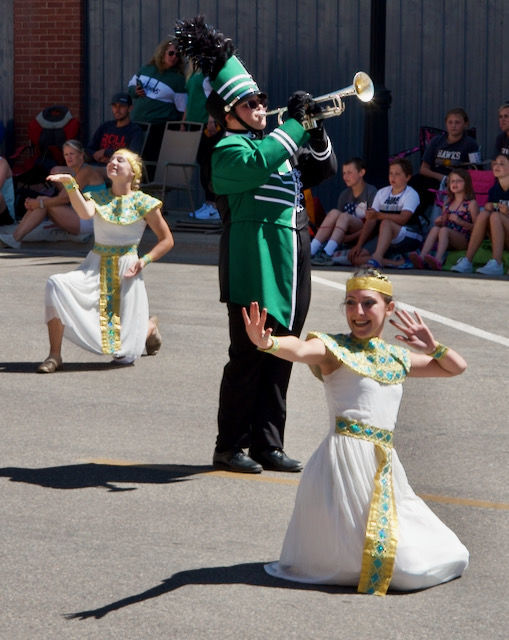 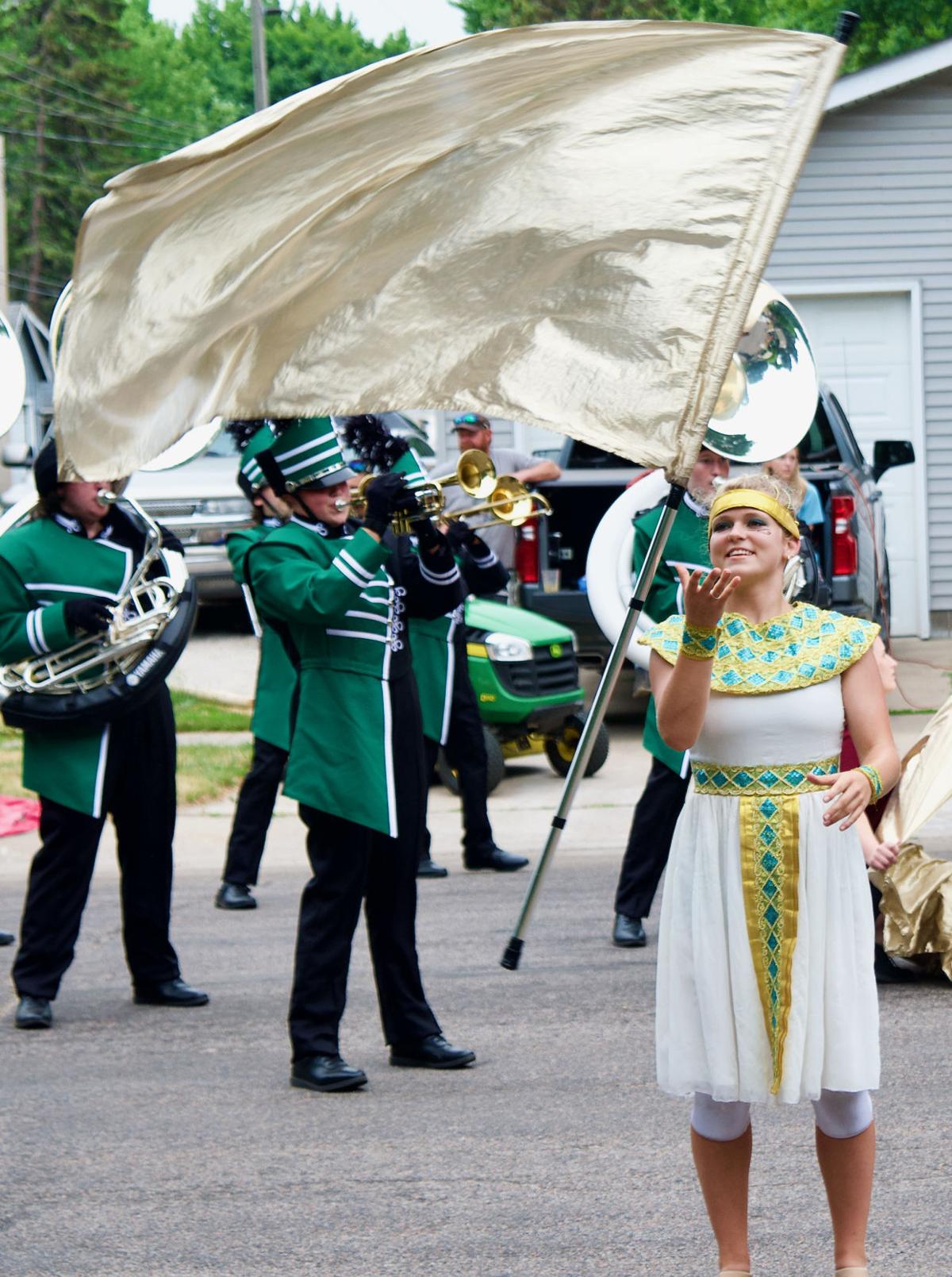 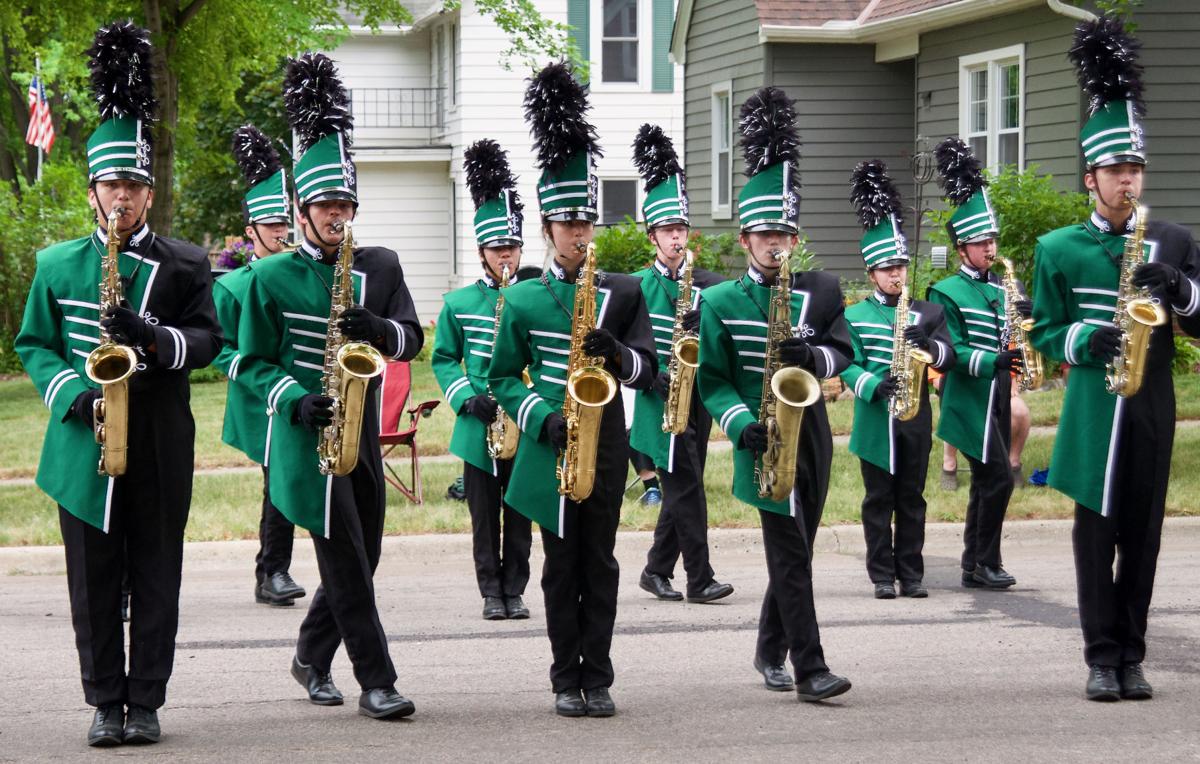 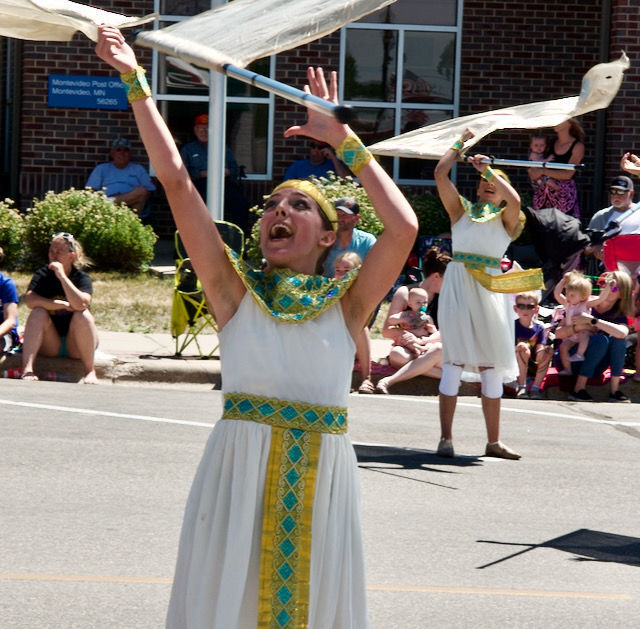 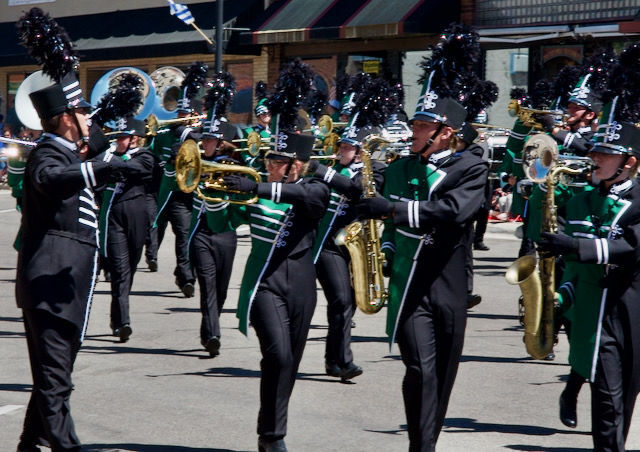 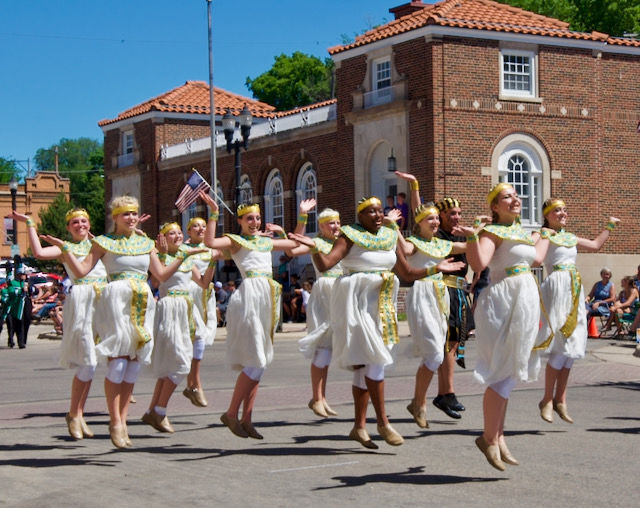 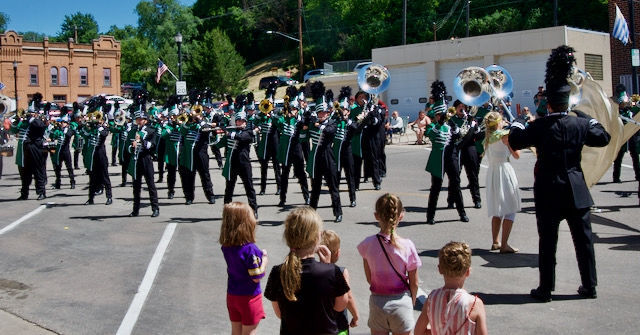 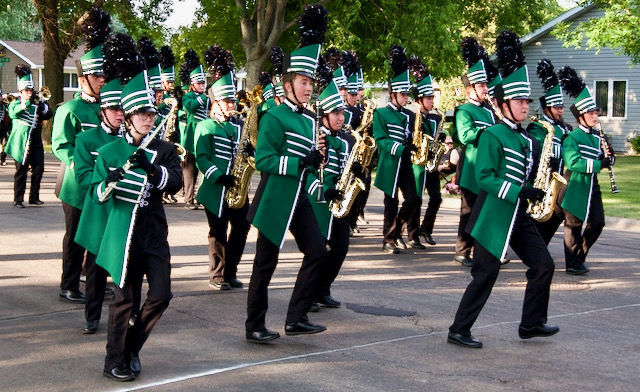 Lichfield High School marching band makes its way down the parade route during a parade in Montevideo. The Marching Dragons will perform for the last time this season during the Watercade Grande Day Parade Saturday.

Drum major Sam Dougherty directs the band during its show June 26 at the Glencoe Days parade.

Litchfield marching band director David Ceasar likes to win as much as the next guy. Maybe even more sometimes.

So a season-high score and a Best of Site trophy, along with Best Drum Major and Best Drumline hardware, in the Marching Dragons’ final competitive parade was a pretty nice culmination to a season that started with many uncertainties.

But it wasn’t the judges’ 85.5 rating — or the triumph over three other bands — June 27 in the Lake City Water Ski Days parade that held the greatest meaning for Ceasar. Or, he hopes, the 120 members of the LHS marching band.

Instead, it was the moments before Litchfield ever stepped off on the parade route.

“It was a great way to end it, obviously, to win it,” Ceasar said. “But what became really at the forefront of importance was the camaraderie that was displayed before the parade.”

Traditionally, competing bands warm up individually in preparation for a parade. For Litchfield band members, this can be a particularly intense time of practice as Ceasar and assistant director Kelly Taylor pick apart the show, often repeating one section of a show several times in an effort to perfect movement, music or both.

That changed a bit in Lake City when the four participating bands — Litchfield, Owatonna, Buffalo and Lake City — came together to play their shows for each other and “talk band.”

“That, to me, was the best part of the whole day,” Ceasar said, adding that he enjoyed the opportunity to commiserate with fellow directors in a “no holds barred” way about their shows and band programs. “We won Best of Site, which is nice. But the day would have been complete if we hadn’t, as well.”

It certainly sounds like a more laid back perspective than Ceasar’s usual sharp focus on marching band perfection. He attributes some of that to the lost “pandemic year” of 2020, when high school bands, along with most community festivals and parades, were shut down.

The time off gave Ceasar opportunity to readjust his outlook, even as he fretted over what the year off might do to both band participation and Litchfield’s tradition of marching band excellence.

But band numbers were strong to start this season, and even though there were two classes that had never marched before, the inexperienced members learned quickly, he said.

Band directors and the judging association opted to change the traditional announcement of scores after each parade. Directors received their band’s score and judges’ comments only, while public announcements of parade results only offered ranking of “good” to “superior” for participating bands.

Litchfield’s individual score improved with each parade, Ceasar said, with the exception of an oddity at the Paynesville parade, where the Marching Dragons also earned 85.5 points – equal to their final performance in Lake City. The Paynesville parade, however, had only two judges, while others had the usual four or more. The more judges, Ceasar explained, the more sets of eyes to see mistakes and reduce a band’s score.

Litchfield earned an “excellent” rating in three parades and “superior” in two, in addition to claiming grand champion in Hutchinson. The Marching Dragons also performed in three parades that were not judged — Montevideo, Glencoe and Eden Valley.

For Ceasar, the band’s best show of the year came during the Litchfield Parade of Bands.

“I think when you put everything together, not just certain elements like how well they marched or how well they played … that was our best show,” he said. “There was so much energy there from the other bands there, hometown spectators … the kids just shined. They were soaking up all of that attention and it showed. It was great.”

That being said, it wasn’t their “cleanest” show, Ceasar said, but definitely the kind of show he wants the band to give for the people who support it.

And as he watched his band warm up with three other bands in Lake City before its final competitive parade of the season, that’s what Ceasar says he thought about. Not a winning show, or beating all the other bands — a mindset he’s had in the past. Instead, he wanted a band that performed well, could appreciate and learn from other bands, and had fun.

“I still want to win. Competition drives me,” he said. “But I also want to respect the work and the environment and the programs that have been built by other schools.

“It’s all about being the best you can be and learning more each day,” Ceasar added. “In Litchfield, it’s been a part of our culture for this entire time to be competitive. When I came in behind Keith Johnson and Lauri Cervin, that culture was already there … it seems to fit my personality. But as time goes on, I’m less driven by the need to win than by the need to be good. Sometimes the need to be good equals winning, and sometimes it’s just good.”

That “need to be good” will be on display when the Marching Dragons step off for their final parade of the season Saturday evening in the Watercade Grande Day Parade.