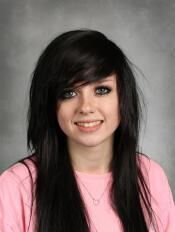 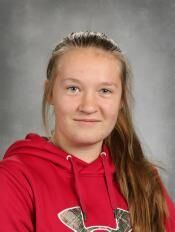 Litchfield High School teaching staff have chosen Gracie Kellen and Brynne Hallstrom as Students of the Week for Dec. 13-17.

Kellen, a senior, was nominated by Terri Orzolek of the Alternative Learning Program, who said, “Gracie demonstrates positive leadership and mentoring skills with younger students. (She) is helpful to her peers and staff.”

Kellen has the ability to persevere through difficult situations and she “is a very determined student and has very attainable goals and expectations for her future,” Orzolek said.

Kellen has been involved in a number of extracurricular activities at LHS, including three years in colorguard with the marching band. She also has participated in community theater, volunteered at Kids of the Kingdom, shadowed a veterinarian, and was a teacher’s assistant. She was also a Miss Litchfield contestant this past summer. She said she enjoys working, being outside and surrounding herself with people and pets she loves. Her interests include cosmetology, animals and hair styling, as well as leadership roles.

She is the daughter of Mark and Callie Kellen of Litchfield.

Hallstrom, a freshman, was nominated by Bryan Goraczkowski of the math/algebra department for her “super-focused effort” and “willingness to attempt the challenging problems.”

She has demonstrated accuracy in calculations, Goraczkowski said, and has been “leading by example with her eagerness and participation.”

Hallstrom said she enjoys painting and drawing, being outside, and spending time with friends and family. She is the daughter of Ryan and Jessica Hallstrom of Litchfield.