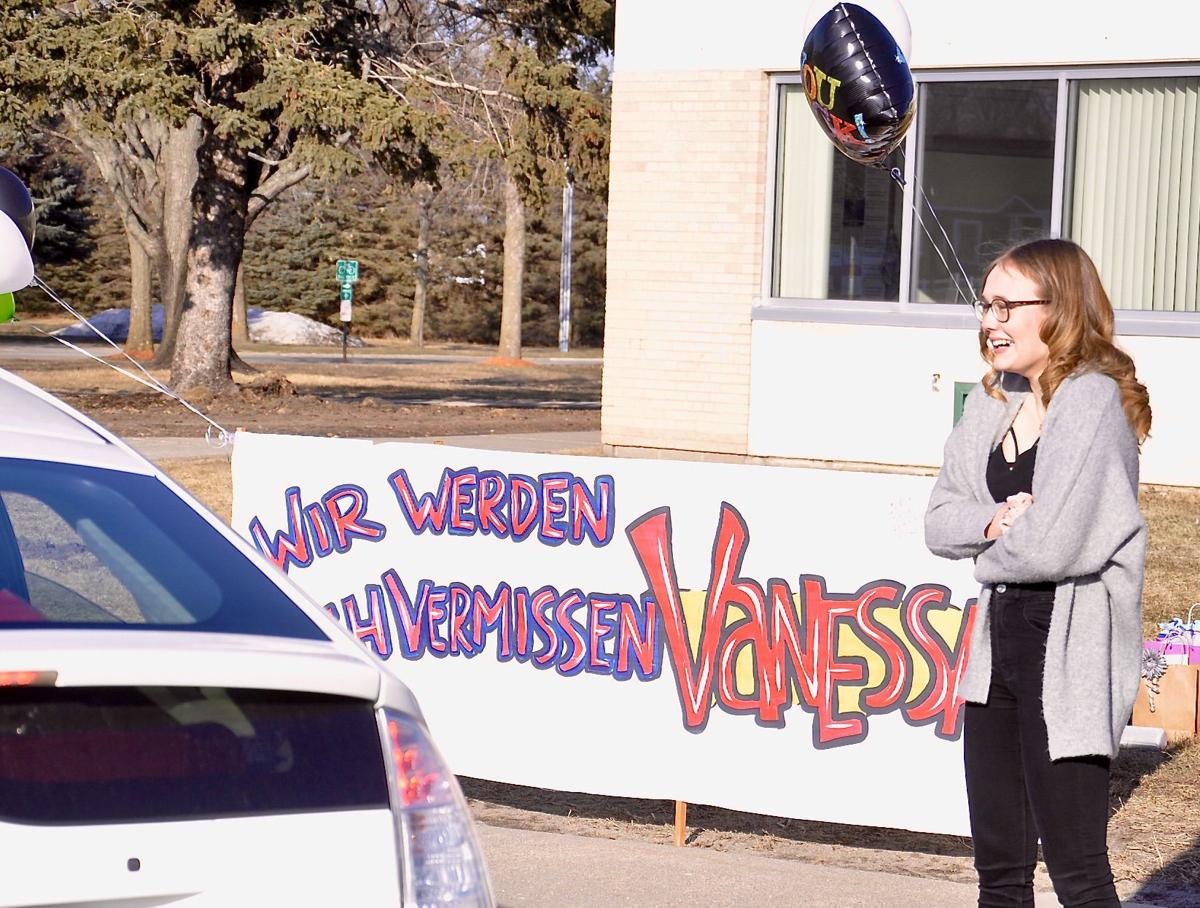 Vanessa Baumann says goodbye to a carload of friends during a farewell event in the Litchfield High School parking lot. When the coronavirus pandemic forced an early end to her year in the United States, Baumann’s host family found a way to have a party while still observing social distancing guidelines. 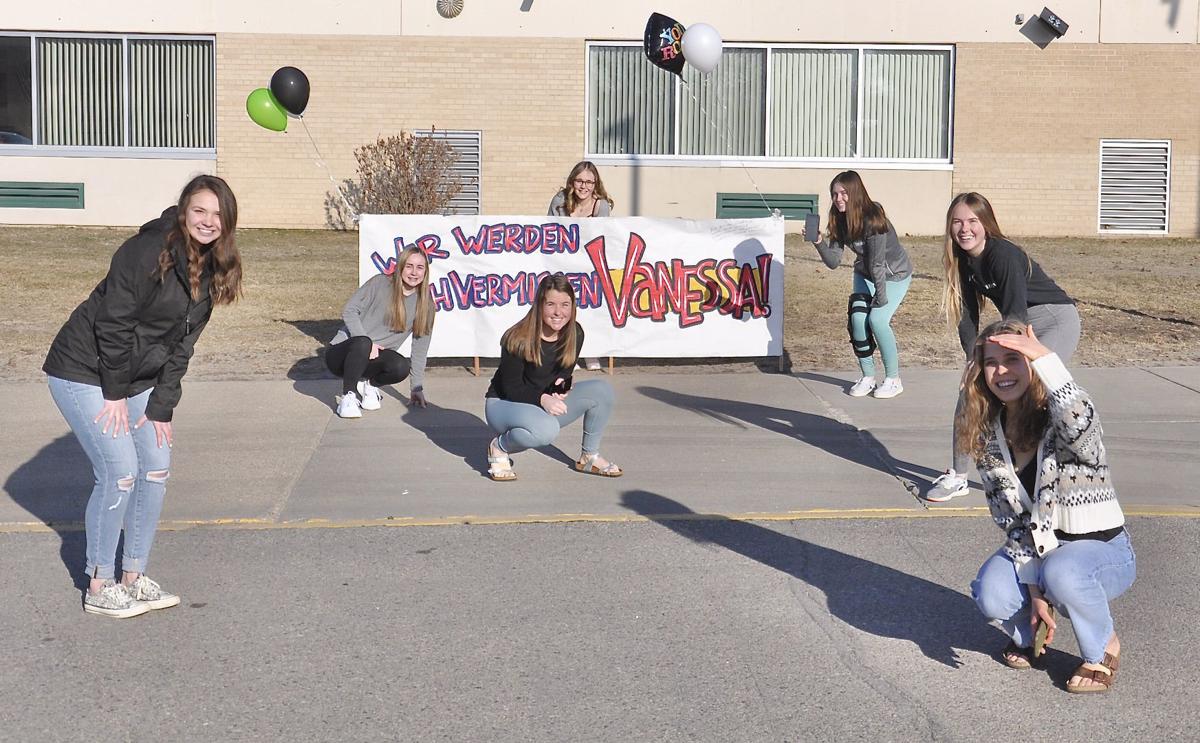 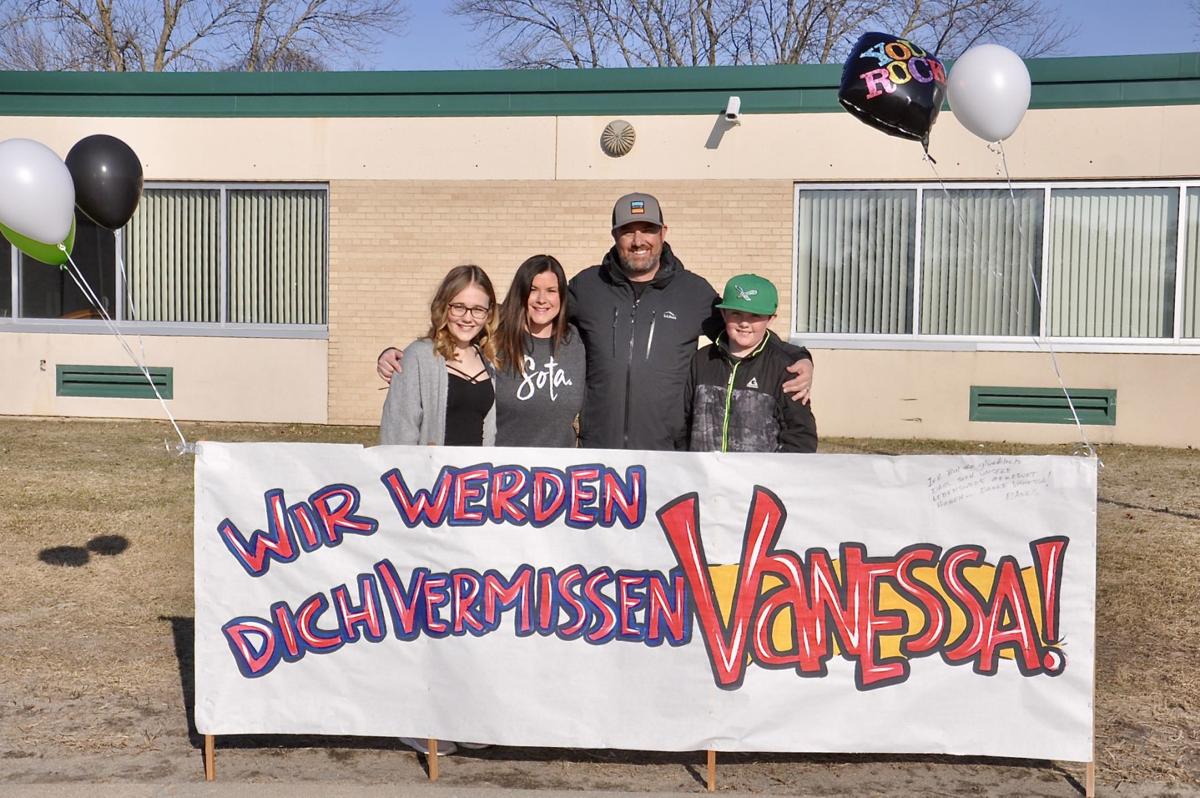 Vanessa Baumann's host family — parents Julie and Barry Gilmer and brother Reed — joined her for a photo during a farewell party last week.

Vanessa Baumann says goodbye to a carload of friends during a farewell event in the Litchfield High School parking lot. When the coronavirus pandemic forced an early end to her year in the United States, Baumann’s host family found a way to have a party while still observing social distancing guidelines.

Vanessa Baumann's host family — parents Julie and Barry Gilmer and brother Reed — joined her for a photo during a farewell party last week.

Vanessa Baumann came to the United States expecting to learn about the American way of life.

And she did. But there was so much more than that — including that life is full of surprises and challenges.

The latest of those unexpected challenges came two weeks ago when she and her host family learned Baumann’s stay in the United States was about to end, due to the COVID-19 pandemic.

AFS, the international organization that sponsors the student foreign exchange program, informed students and host families in mid-March that it would be sending all German students home within two weeks.

“It’s been a pretty abrupt ending to our adventure that we’ve been having here,” said Julie Gilmer, a teacher at Litchfield Middle School, who with her husband, Barry, and son, Reed, made up Baumann’s American family.

That sudden ending was difficult for both the Gilmers and their foreign daughter.

“Prom, graduation … I was going to extend my stay to go to the West Coast," Baumann said. “I was going to have summer here. I feel all the fun stuff was going to be in the next four months.”

Instead, she was trying to find a way to fit several months’ worth of memories and souvenirs into one suitcase and a carry-on bag, preparing for a Chicago-to-Denmark flight Monday. And her host family, with whom she’d grown so close since moving to Litchfield in November, was working on providing her the kind of happy send-off they believed she deserved.

Baumann, who lives near Stuttgart, Germany, came to the Gilmers on Nov. 1. They were her third stop after two temporary host family stays in the metro area.

Julie and Barry Gilmer had considered hosting a foreign student at some point, but they figured it would be a few years from now. And then Julie learned at school one day of a German student who still hadn’t settled with a permanent host. The Gilmers decided to give it a shot.

“Our family feels like this has been such a great experience, because it’s a reminder of being connected with people in the world,” Gilmer said. “We’ve all clicked. We’ve been very fortunate with connecting, establishing a relationship with her. It’s been very comfortable.”

Baumann agreed: “I think I’ve never been bored in this family, because we always do things … a lot crazy. I would say it’s an adventure to live with them.”

Though it took longer than she might have hoped to find her way to the Gilmers and Litchfield, Baumann said she could not have been happier here.

“The best thing that could happen to me is that I had a fresh start,” she said. “I could just be me. I could find really, really, really good friends.”

And she did make many good friends, a fact evidenced by the spur-of-the-moment farewell party planned by her host family.

Julie Gilmer said that when it looked like Baumann would be called home, she began to plan a farewell. But those plans changed as rapidly as the guidance from federal and state government officials about acceptable interaction amid the COVID-19 outbreak. A party with 10 of her closest friends that met early social-distancing guidelines quickly evolved into a drive-by farewell in the Litchfield High School parking lot.

As difficult as it might seem to make that sort of setting feel warm and personal, it succeeded. Twenty to 30 cars rolled through the parking lot in about 20 minutes, each loaded with classmates, each stopping near the high school entrance were Baumann and the Gilmers accepted well-wishes.

“She was surprised,” Gilmer said of Vanessa’s reaction to the turnout. “She was overwhelmed with how many people showed up.”

“The first few cars, I felt weird, because I didn’t know what to say, but then I felt famous,” Baumann said with a laugh. “It was super cool because I got to see so many people, people I didn’t even expect to see. It was kind of like being a celebrity.”

As much as it mean for Baumann to have a chance – although an at-a-distance chance – to say goodbye to close friends and classmates, Gilmer said, the farewell probably helped others, as well.

“I think it was really important not only for her to have that closure, but also for the kids here to have that,” Gilmer said. “She meant a lot to them. Her personality was really social and energetic. A lot of kids just responded well to that. They needed to say ‘goodbye,’ too.”