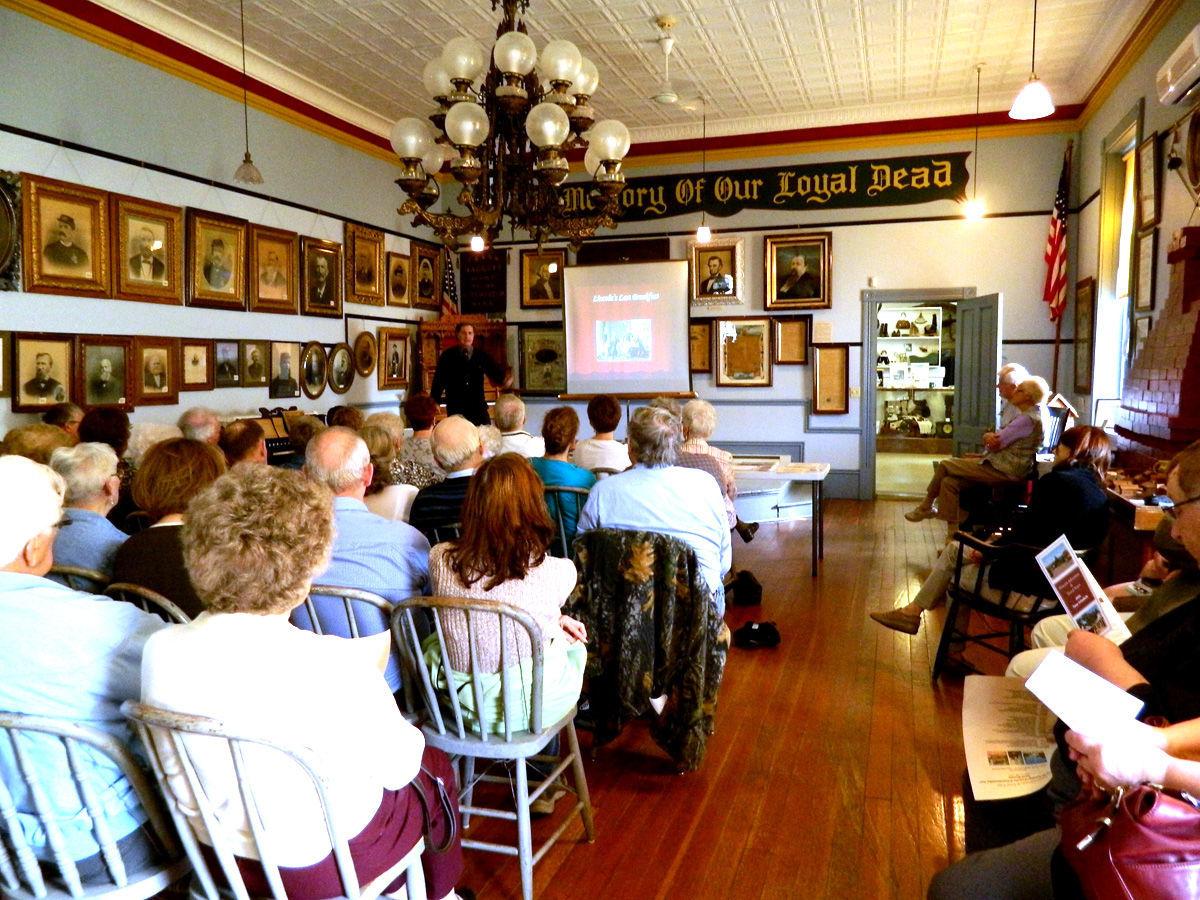 The G.A.R. Hall’s meeting room — with its original chairs — is used for programming. One of the building’s attractions is the iron chandelier., which was purchased in 1885 for $150. Rumor has it, the chanelier once hung in a New Orleans bordello, though no factual evidence has been found to support that allegation 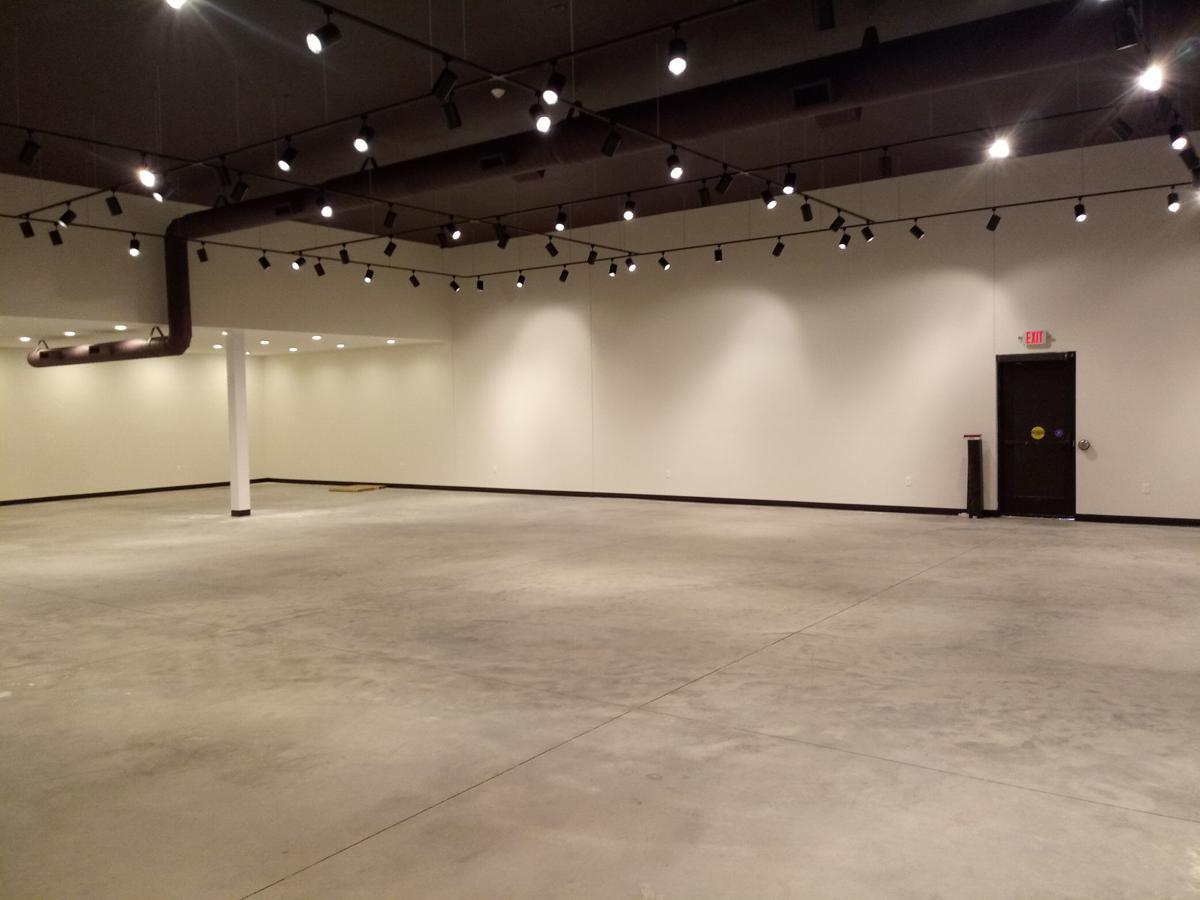 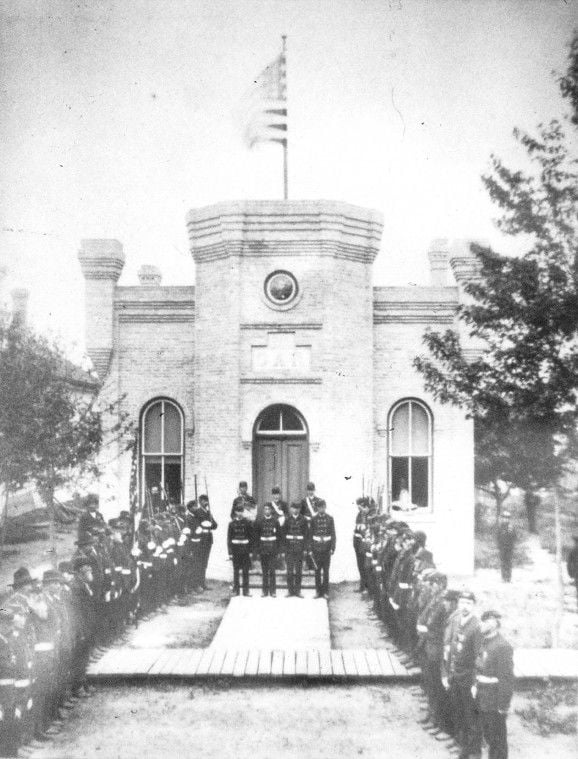 Members of the Frank Daggett Post and Drum Corps stand at attention in front of the G.A.R. Hall on Memorial Day, May 31, 1886, one year after it was built.

The G.A.R. Hall’s meeting room — with its original chairs — is used for programming. One of the building’s attractions is the iron chandelier., which was purchased in 1885 for $150. Rumor has it, the chanelier once hung in a New Orleans bordello, though no factual evidence has been found to support that allegation

Members of the Frank Daggett Post and Drum Corps stand at attention in front of the G.A.R. Hall on Memorial Day, May 31, 1886, one year after it was built.

To keep my fingers on the pulse of the area, I spend a good deal of my time reading newsletters, following social media feeds, and listening and talking with people.

It was with great interest I read the January issue of the Meeker County Historical Society Newsletter. According to Bayley Schluter, executive director, the museum in Litchfield saw a 31 percent increase in visitors from 2018. Many of those visitors came from at least 99 Minnesota towns, 17 states and two foreign countries — Thailand and Australia. This is what was recorded in the visitor book, so it's possible the increase in attendance could be even greater.

The museum has also worked to improve its school tours, create family-friendly programming and simplified its membership structure. All good things.

I was curious if this was an isolated occurrence or something other local museums are experiencing, so I reached out to Brian Haines, executive director of the McLeod County Historical Museum.

Like the Meeker County Historical Museum, Haines said the Hutchinson museum has seen an uptick in visitors, too.

What Haines found encouraging from this statistic is where the increase was coming from: families with moms, dads and kids. He credited it to the museum's publishing of a kids newsletter and a scavenger hunt with prizes.

"It's been great," he said. "The kids love the activities and the parents love that we are offering something fun and educational for the whole family. It's very inspiring to see the younger generation taking an interest in their history."

With the expansion of the new Vern and Alyce Steffel Wing to the museum, Haines is looking forward to adding new elements to the displays, which he hopes will draw even more people.

Like Schluter in Litchfield, Haines has added new programming this past year including the Breakfast Club, which is an opportunity for people to learn and talk about local history, and Young Historians, which is geared to school-age students. MCHS also changed its newsletter to a magazine format, which provides more in-depth storytelling.

It's hard to beat success when it translates into dollars. The local historical society ended its year on a  high note with the success of its first 1920s-themed gala, which earned $9,500 and drew a nice-sized crowd to the Crow River Golf Club.

From an operating standpoint, the museum/historical society receives $69,000 from McLeod County. From a taxpayer standpoint, it's good to know Haines, the museum staff, board and volunteers are good stewards working to increase the value of our investment.

The first time I ever visited the Meeker County Historical Museum at the G.A.R. Hall I was a young girl. My grandmother took me to see the exhibits. I remember it was a dark and sort of scary place back then.

The G.A.R. Hall, which was built in 1885, has been preserved as nearly as possible to its original condition. It was deeded to the city of Litchfield on the condition that it be kept as a memorial to Civil War veterans and be open to the public. It was added to the National Register of Historic Places in 1975.

The museum showcases local artifacts including Land O'Lakes, which has roots in Meeker County where the first dairy cooperative was started. Schluter writes that it was one of the first things people told her when she started her job as the new executive director of the Meeker County Museum.

Interested in baseball? Don't miss an upcoming exhibit featuring the history of baseball in Meeker County. It will include Quinten "Lefty" Hoien who was inducted into the West Central Minnesota Hall of Fame Class of 2020.

If you have an idea for an exhibit, consider being a part of the Exhibit Planning Committee. The first meeting is 5-7 p.m. Tuesday, Jan. 28, at the Meeker County Museum.

To find out what's happening at the McLeod County Historical Society, check out Brian Haines' "More to the Story" column on page B1 in this issue.