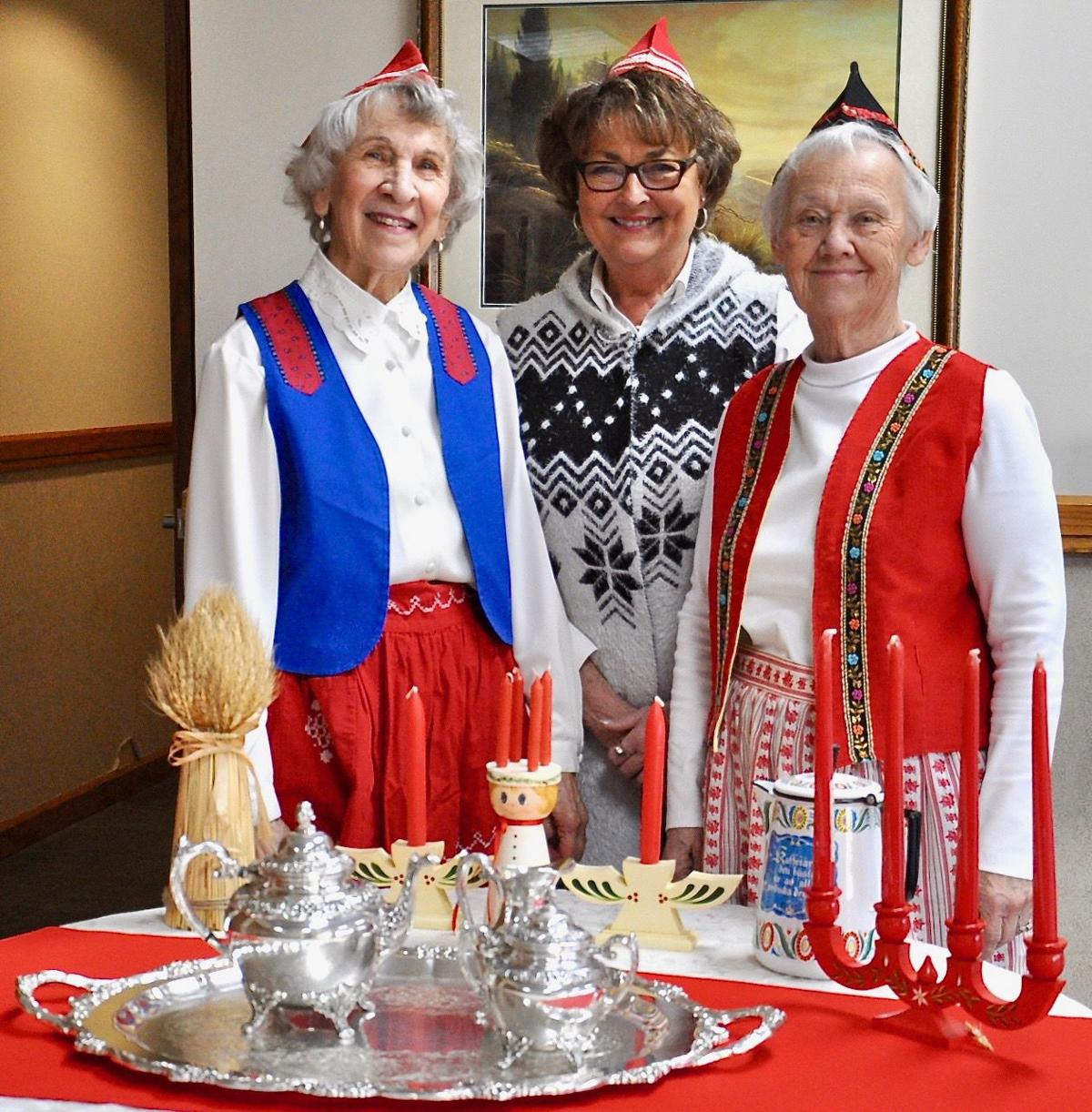 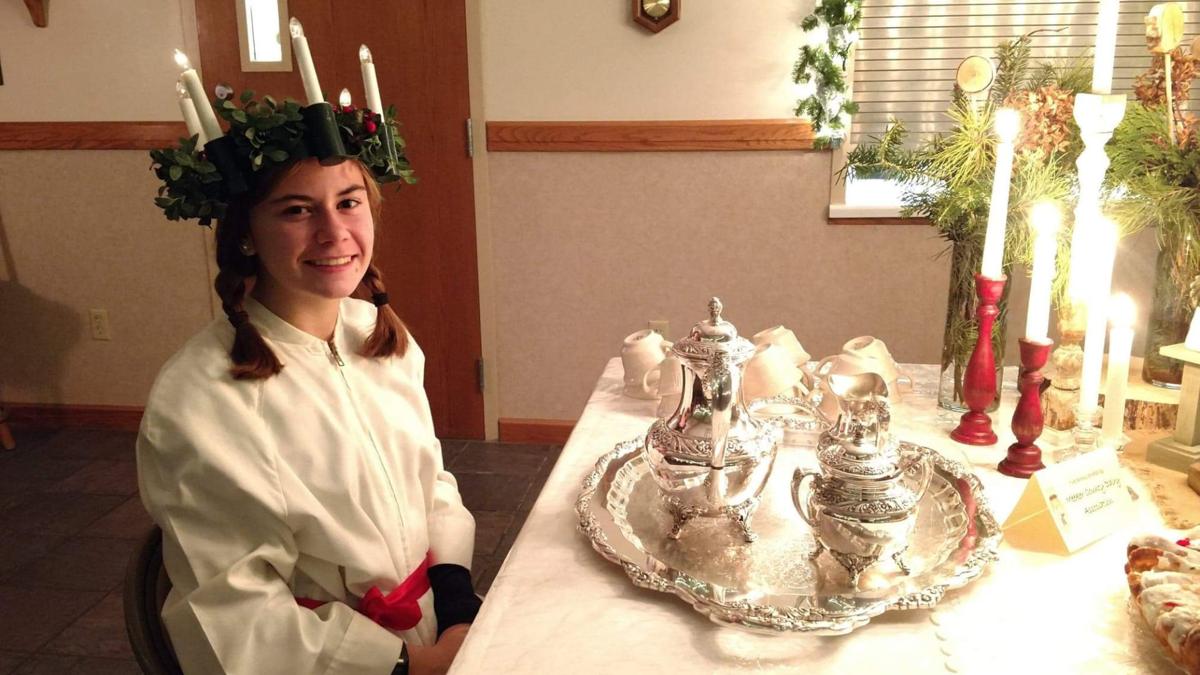 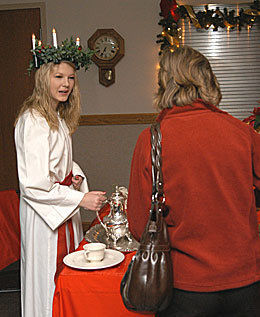 Amy Pierce, dressed as Saint Lucia, served coffee during the Saint Lucia breakfast in 2009. Pierce, 14, was one of several girls from the church who took on the St. Lucia role for the breakfast. The breakfast honors Lucia, the "Queen of Lights," "Lucia Bride" or "Saint Lucia."

Amy Pierce, dressed as Saint Lucia, served coffee during the Saint Lucia breakfast in 2009. Pierce, 14, was one of several girls from the church who took on the St. Lucia role for the breakfast. The breakfast honors Lucia, the "Queen of Lights," "Lucia Bride" or "Saint Lucia."

The simplest gestures can sometimes lead to the grandest traditions.

That certainly is the case with the St. Lucia celebration at First Lutheran Church in Litchfield.

Begun in 1951 when a pastor’s wife first served breakfast to a confirmation class, the St. Lucia breakfast now involves hundreds of parishioners preparing breakfast for hundreds of people from Litchfield and beyond.

It takes tremendous commitment to make anything last for the better part of seven decades, and a tradition that requires the involvement of so many can be especially challenging to pull off these days when people’s attention seems drawn in so many different ways.

While they admit that some things have changed through the years — labor-intensive egg coffee is no longer served, for example — some of the longest-serving volunteers say the St. Lucia festival marks the beginning of the holiday season for them. And they hope it continues for a long time.

“It takes many people to get it going, to keep it going,” said Dianne Thorp, a First Lutheran Church member since 1961. “But it’s a fun family event.”

Thorp said that when her children were little, she found a babysitter to care for them while she spent the morning at church helping at the festival. That soon evolved into a family work crew.

The statement could not be more true when it comes to St. Lucia tradition, which began in 1951, according to Janet Chilstrom Sickert, who grew up in Litchfield and now lives in West Linn, Oregon. She is the sister of Herb Chilstrom, who served as the first bishop of the Evangelical Lutheran Church in America.

In a letter to St. Lucia organizers, Sickert said it all started at First Lutheran with Olive Bergren, wife of the Rev. J. Henry Bergren, inviting choir members, Sunday School teachers and helpers and office staff to the parsonage at the corner of Ramsey Avenue and West McQuat Street to celebrate the Swedish St. Lucia Day.

“How I remember arriving at their glowing home in the dark, and seeing what seemed like hundreds of candles all over the house, the dining room table covered in amazing egg dishes, baked pastries and breads, Swedish cookies and fruit soup, and more … And one of the confirmation girls pouring coffee from a shiny silver coffee server with a stunning Santa Lucia crown from Sweden on her head!” Chilstrom wrote. “It was like entering into a ‘dream’ for me.”

The St. Lucia festival, or St. Lucy’s Day, is celebrated Dec. 13, commemorating the woman who was executed in 304 A.D. for helping Christians during the Diocletianic Persecution. It is said that St. Lucy wore a crown of candles to light her way as she assisted Christians. Sweden began celebrating St. Lucia Day in 1764.

That crown of candles, as well as a white robe and red sash, are symbols of St. Lucia and the “festival of lights” in her honor.

And they are a big part of the St. Lucia breakfast at First Lutheran Church, where every year since the early 1950s, one girl from the confirmation class is chosen the “Lucia queen” and dresses the part as she helps with the breakfast, often serving coffee from the silver coffee pot Sickert so well recalls.

The popularity of the St. Lucia breakfast soon outgrew the parsonage, and the festival moved to the church and continued to grow. In years past, the breakfast — served on the Saturday closest to Dec. 13 — drew as many as 700 people, with diners lined up in the church’s hallways, or waiting in the church sanctuary.

Serving begins at 6 a.m. and dining is done by candlelight, in observance of the festival of lights theme. On the menu are traditional Swedish foods, including eggs a la goldenrod, rice with cranberries, sausage and tea.

Oh, and “lots of Christmas cookies and lots of good coffee,” said Dee Bollin, a church member since 1961.

That coffee used to be of the egg variety, and longtime volunteers including Carlson, Thorp, Bollin and Valda Thomas recall what a treat to the senses that was — but also the work it took to make good egg coffee.

“My first year I got involved, I had to meet this little lady down here at 4 a.m. to make cauldrons of egg coffee,” Carlson said with a laugh.

“I think we all remember helping her pour that coffee through the strainer … pot after pot after pot,” Thomas said. “But it was just delicious.”

A lack of space and egg coffee expertise forced organizers to switch away from that process years ago, but the coffee, the volunteers assure, is still strong and delicious. And when the aroma of good coffee and Swedish treats mingles with the beauty of a candlelit church — and a sense of community — it helps create a tradition that can’t be beat, they said.

“I have friends that say it’s not Christmas until they come here,” Thomas said. “It’s a start of the Christmas spirit for them.”

“For us, we would go to Lucia breakfast and then come home and decorate our tree that day,” Thorp said. “That was kind of our tradition.”

Though attendance has declined from the early days, Carlson said she believes the breakfast remains important to members of the congregation.

“It’s the tradition,” Carlson said. “If 600 people came to it again, that would be great. I love when I see the young women come out and help. That’s really heartening to see that. They are the ones who will keep it going.”

Having a mother who was born in Sweden, and immigrated to America and Minnesota with her parents at 4 months of age…this special tradition being celebrated with our church ‘family’ was almost magical for me!

— Janet Chilstrom Sickert, explaining the importance of the Saint Lucia breakfast at First Lutheran Church, in a letter to even organizers

Who: The breakfast is open to the public, and put on by members of the First Lutheran congregation. Organizers estimate that the breakfast involves 250 to 300 church members between preparation, decorating, cooking and serving.

Why: Saint Lucia Breakfast is First Lutheran Church's longest-standing event, according to organizers, having started in 1951. It was started by a former pastor's wife and took place at the church parsonage, but soon outgrew that space and moved to the church.

Admission: $8 for adults and $5 for students.