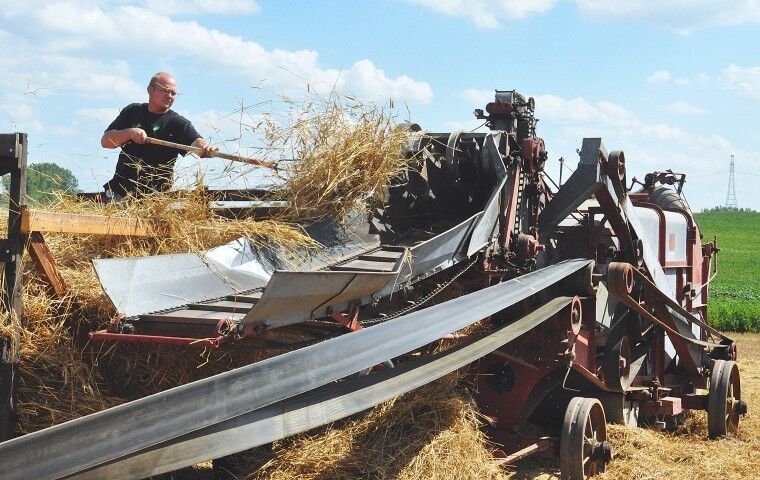 Ben Donnay of Paynesville, Minn., pitches straw into a thresher from the early 1900s. The machine was celebrated Saturday and Sunday at Forest City Thresher Days. 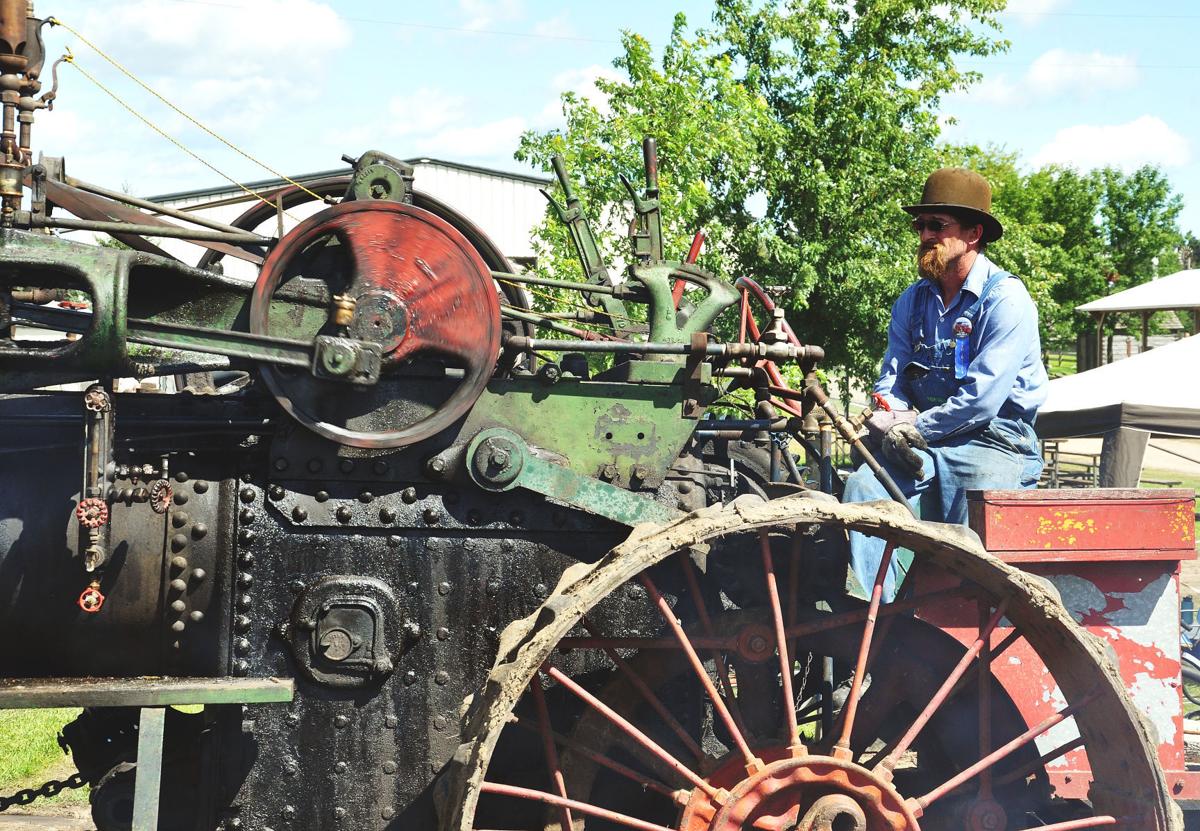 A visitor sits atop a 1912 Case steam engine owned by Jason and Ross Jakobitz during the Forest City Threshers show.

Ben Donnay of Paynesville, Minn., pitches straw into a thresher from the early 1900s. The machine was celebrated Saturday and Sunday at Forest City Thresher Days.

A visitor sits atop a 1912 Case steam engine owned by Jason and Ross Jakobitz during the Forest City Threshers show.

Exhibitors, volunteers and workers have planned, painted and prepared displays and exhibits, and now the show — the annual Forest City Threshing Show, that is — will go on Saturday and Sunday.

Preparation actually began when the Barka family of the Forest City area rounded up their work crew in mid-July and used their vintage binder to bundle small grain at the thresher show grounds. The grain will be used as part of demonstrations of threshing and separating during the show, the activity around which the entire show is based.

Ross and Jason Jakobbitz from the Buffalo/Hector area, recently had the state boiler inspector out to inspect their steam engines to ensure safe operation during the show. The family displays a large electric generator that was moved from Benson a number of years ago. They also have an old-time blacksmith shop which shows how iron and metal was used to make implement repairs and also made into.

Mike Arens of Eden Valley will have a range of gas engines in an expanded display building. The exhibit will include a number of rare and unusual gas engines, as well as a variety of collectibles displayed throughout his building.

A father and son team from Grove City, Dan and Troy Heuer, will bring their collection of Maytag gas engines and Maytag wash machines to the show. Their exhibit demonstrates what it took to clean clothes prior to the advent of electricity.

Merle and Betty Cropp will have their display building open which has a number of John Deere related items and equipment.

The schoolhouse from District 34, which was near North Kingston and moved to the showgrounds, will be open for those who would like to see how classes were conducted prior to computers. The new Women’s Activity Building will also be open, although no displays or activities are scheduled at this time.

Area tobacco growers will be represented with a display of what it took to grow tobacco in Minnesota. Dan Ruprecht of the Eden Valley area will have fresh grown tobacco on display as well as a number of tools and equipment that was used to grow tobacco. Tobacco was an important part of the agricultural economy for many years in northern Meeker and southern Stearns counties.

Dale Loch and Maynard and Marge Theis of the Forest City area will display a number of vintage items and collectibles from area creameries and various mercantile operations in their respective buildings.

The Bosch Family (another father and son team) from the Atwater area will bring a portion of their extensive gas engine display to the show. The Bosches are widely known and respected for their knowledge and expertise of gas engines as well as Ford products. They will also be showing at their home show in Atwater later this fall in September.

Theis and Arens and their work crew also run a saw mill during the show to display how logs are made into usable lumber.

The Harlan Johnson Family will open up the “Curiosity Corner” building which contains many rare and unusual collectibles and artifacts. The building and the collections in it are a virtual museum and is one of the must see attractions of the show.

The Depot which was moved to Forest City from Litchfield will be open for a tour on both days of the show. The process of restoring it to a freight depot is still underway and will take a while to complete. Interior demolition has progressed to the point where the original interior sheathing of the freight depot is visible as well as portions of the original post and beam construction. Also readily visible are the charred roof boards from the fire which took place in the 1890’s. Tour times will be posted during the show.

A wide collection of milking equipment and dairy related items is being presented by Milford Smith of Ellsworth Township.

For those interested in seeing old field equipment, Dave Jutz has lined up a number of vintage farm implements towards the east end of the showgrounds. There are many one-of-a-kind pieces.

The Ideal Buildings contain exhibits and displays, as well as storage space. Included in the displays is a new display area dedicated to the lumber yards of Meeker County. Nine different communities had lumber yards and the number of owners is well over 50.

Next to the lumber yard display is an exhibit containing corn shellers, grain cleaners, seed corn sacks and miscellaneous corn and grain related items. There will also be a corn sheller box set up for kids to take a turn at shelling corn.

A petting zoo and barrel train rides for the kids will also be made available by the Matt Lindberg family.

The feature tractor this year is Massey Ferguson and related equipment lines. Massey Harris and Ferguson tractor companies merged years ago to become Massey Ferguson. There will be a parade of tractors and equipment each day at noon and that will be emceed by Don Knutson.

An antique tractor pull will begin at 1 p.m. Saturday or immediately after the parade. Dale Groskreutz is the organizer and the track has just been regraded for this show. Concrete bumpers were recently installed to enhance both safety and performance.

Food will be in ready supply as there will be a threshers French toast and pancake breakfast each day until 9 a.m., and also a threshers dinner from 11 a.m. to 2 p.m. both days. A hamburger stand and a taco stand will also be serving food throughout the day. The Meeker County Dairy Association will also have malts available and there will also be a pop stand operated by local 4-H-ers for the thirsty.