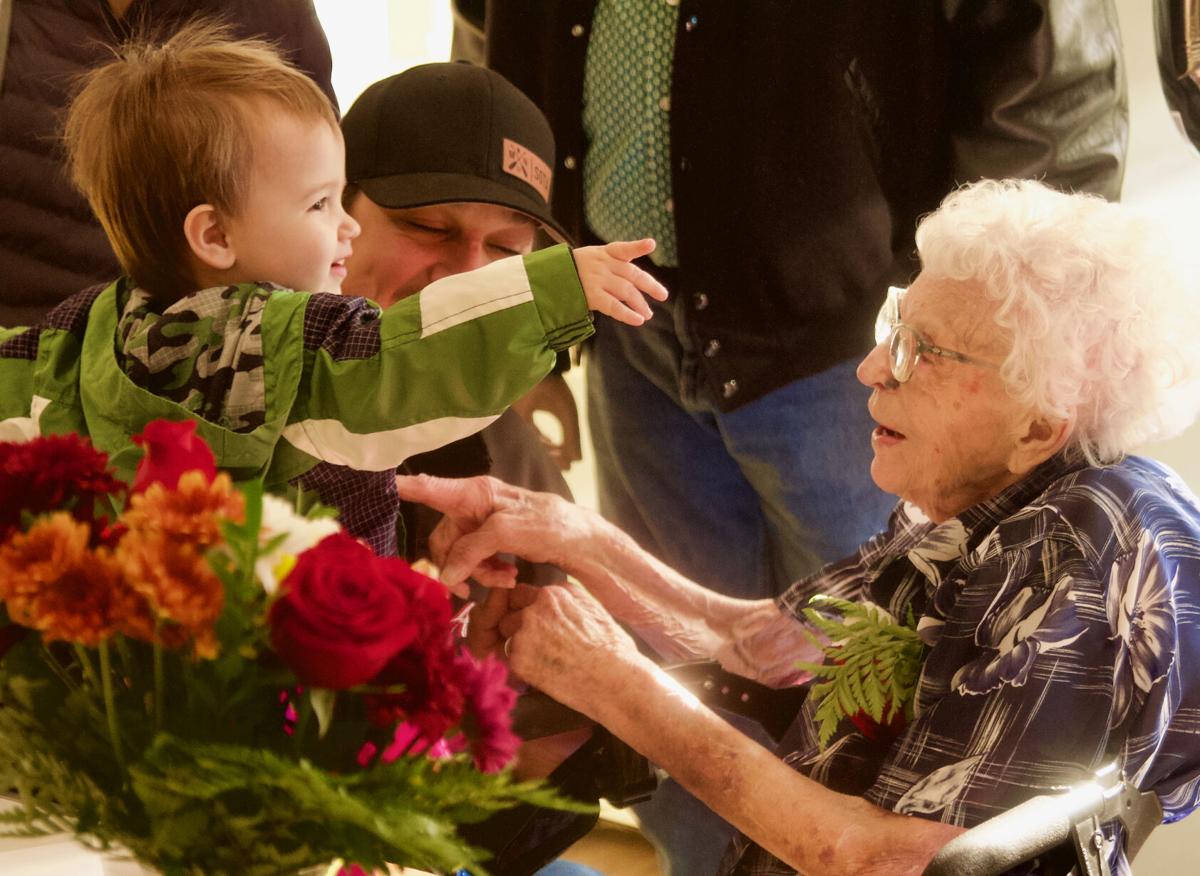 Orphea Mattsfield talks with 1-year-old Avry West and his dad, Abel, who joined her 110th birthday celebration Friday afternoon at Ecumen of Litchfield. 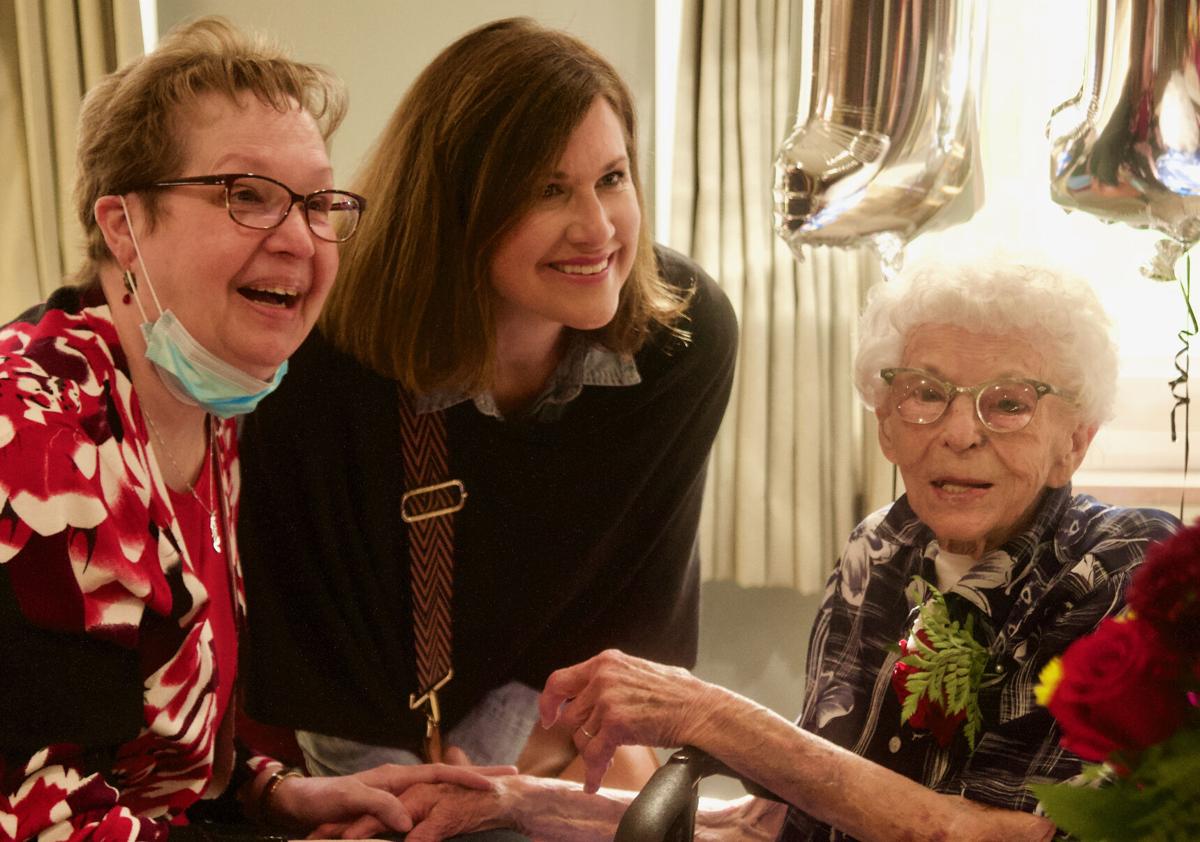 Gayle West and her daughter, Megan Yates, members of Orphea Mattsfield’s “adopted” family, greeted her during the birthday party. 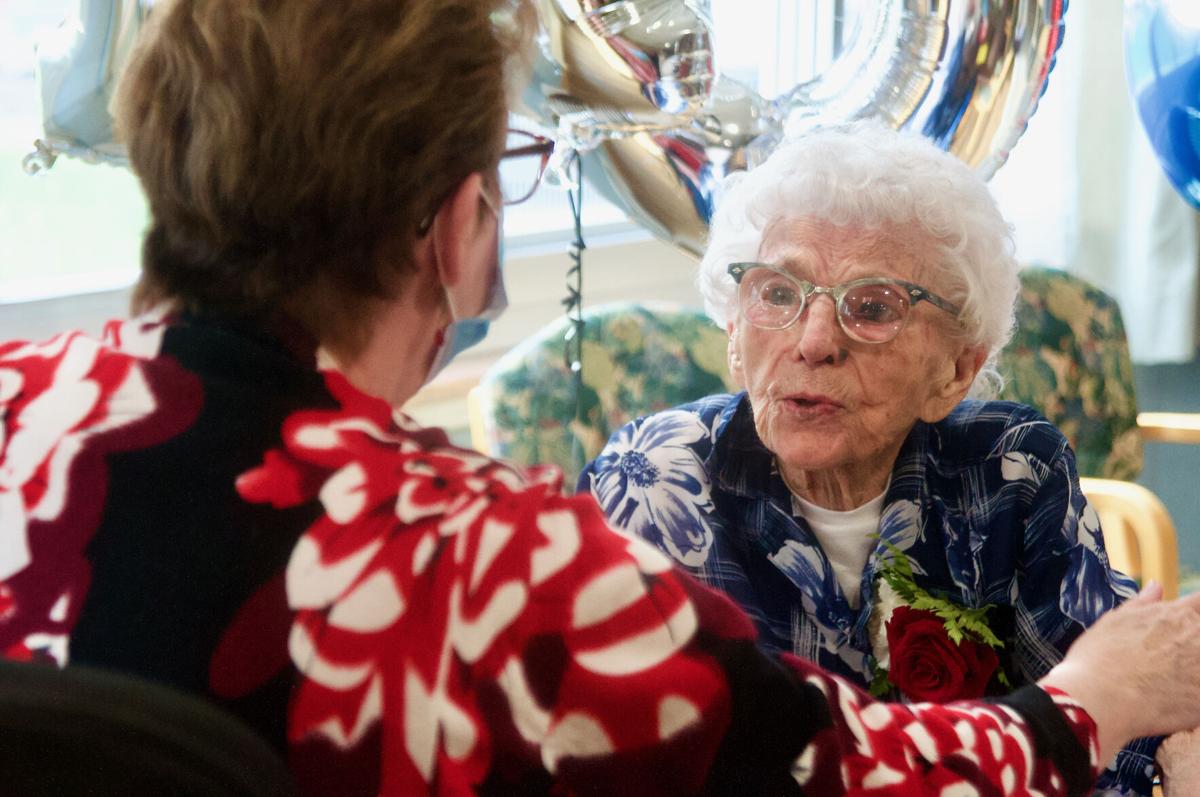 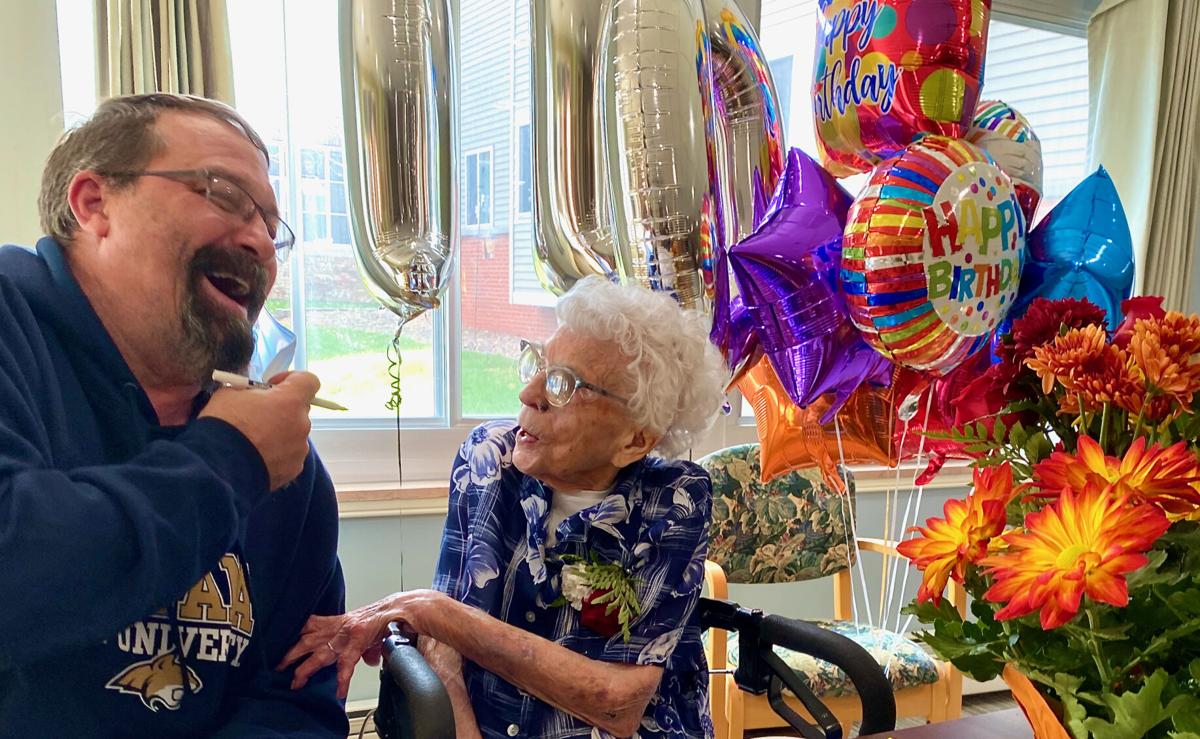 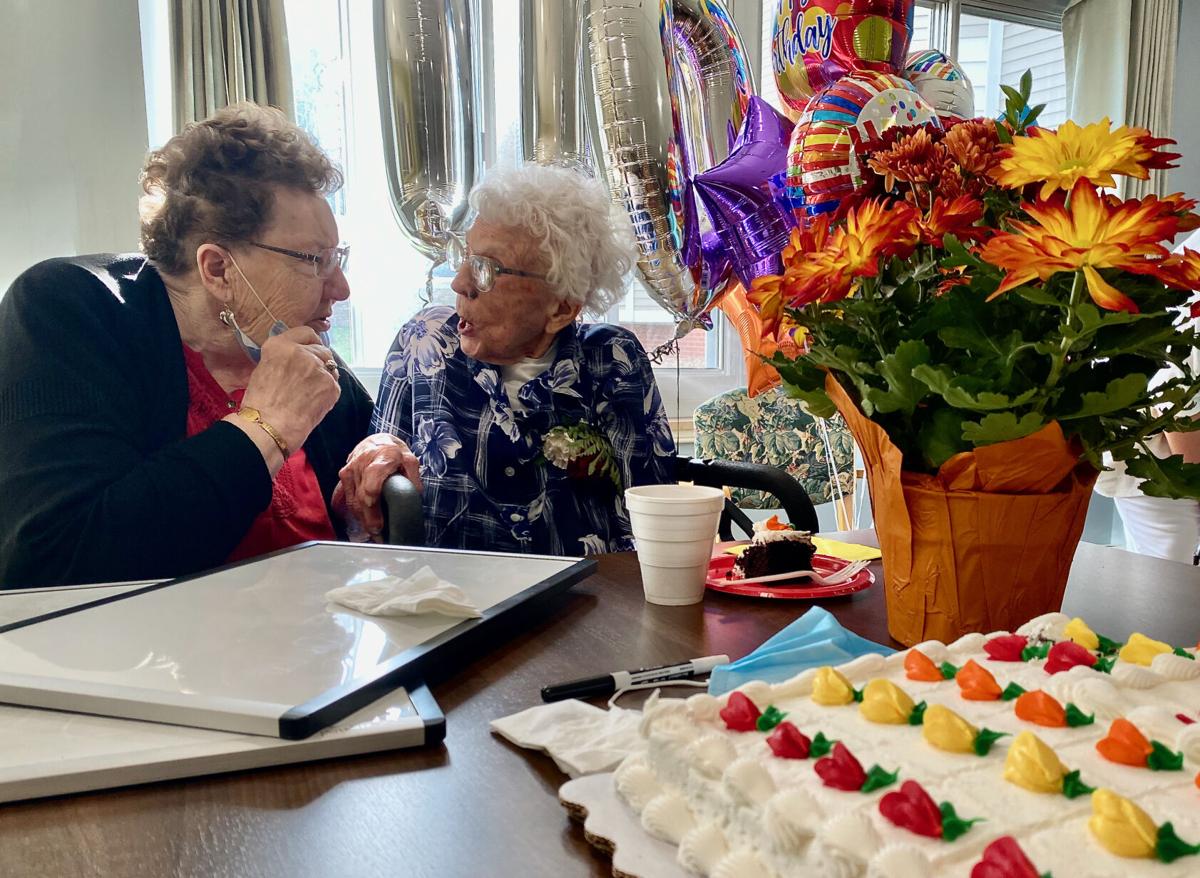 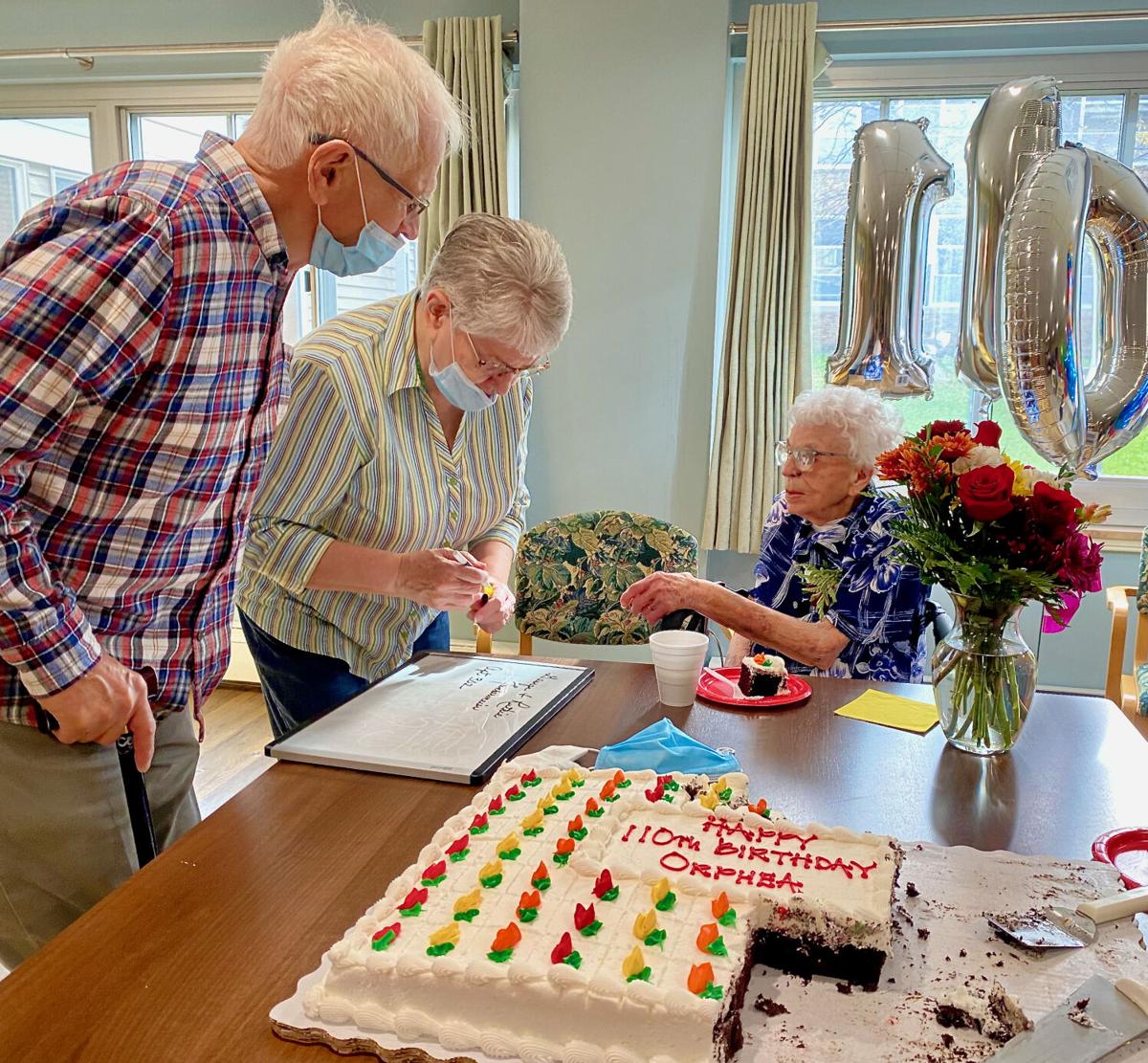 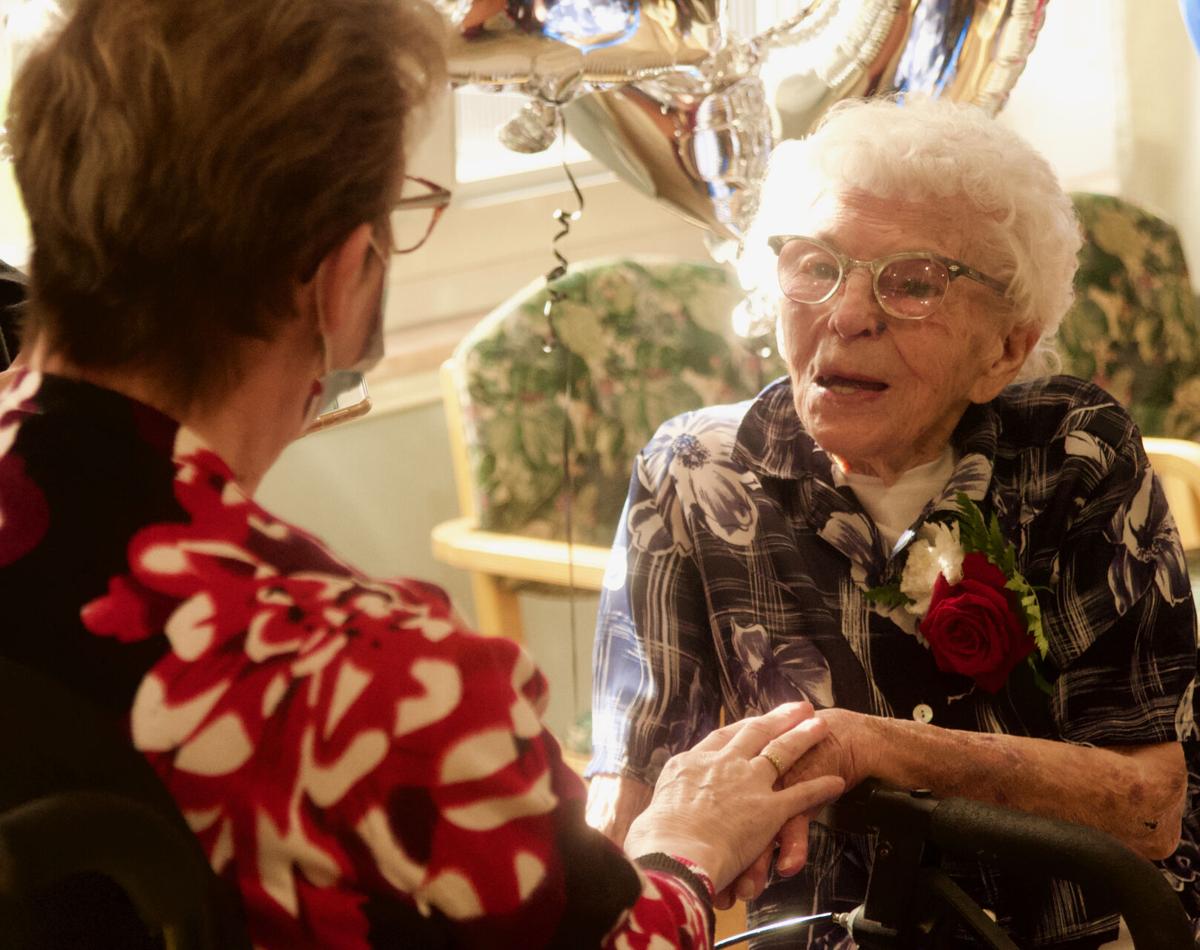 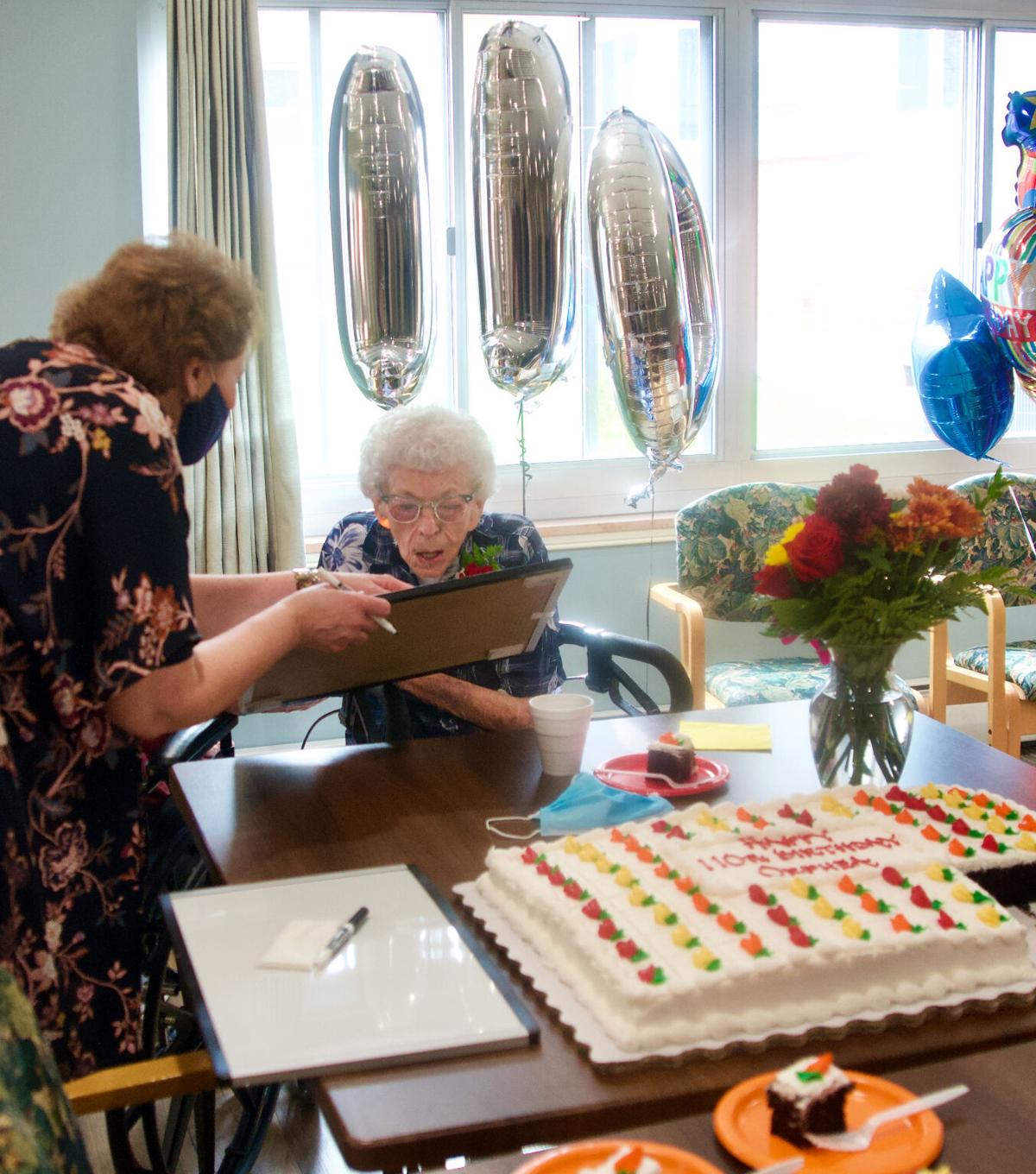 Orphea Mattsfield talks with 1-year-old Avry West and his dad, Abel, who joined her 110th birthday celebration Friday afternoon at Ecumen of Litchfield.

Gayle West and her daughter, Megan Yates, members of Orphea Mattsfield’s “adopted” family, greeted her during the birthday party.

That’s the word that kept coming up during Orphea Mattsfield’s birthday party Friday in the community room at Ecumen of Litchfield.

“Orphea’s a treasure,” Shelly Hank, a hospice nurse at Ecumen, said. “She really is amazing.”

It’s the kind of adulation fitting of someone observing her 110th birthday.

And it was uttered numerous times by the steady stream of visitors who visited the community room to greet Mattsfield, who for her part seemed humbled and a bit surprised over all the fuss.

When Ecumen staff first asked Mattsfield about a birthday party, she was uncertain it was necessary, even asking staff at one point if they thought anyone would show up, according to Nicole Larson, care consultant at Ecumen Homecare & Hospice.

“We asked if she would let us do this for her, and she said sure,” Hank said with a smile. “She said, ‘It’s OK this time, but it’s going to be my last one.’ She’s been saying that for the last three years or more though. She just keeps going, so we’ll see.”

Despite diminished hearing and eyesight, Mattsfield still lives in her own apartment at Ecumen. Hospice nurses like Hank check on her each morning and evening, but she maintains a fair degree of independence.

Though she’s the oldest resident at Ecumen of Litchfield, Mattsfield isn’t the only one who’s gone beyond the century mark. In fact, one of the guests at Mattsfield’s party was 103-year-old Esther Haag, also an Ecumen resident.

The number of centenarians – people who have reached 100 years old – are increasing worldwide, according to the United Nations, which expects the number to rise to about 573,000 this year. The United States has the highest number of centenarians in the world, with 97,000, according to the U.S. Census Bureau, up from the 53,364 counted in the 2010 census.

While the number of 100-year-olds in the country is growing, it’s still a significant milestone. And 110 years old? Well, out of the ordinary, to say the least.

It’s estimated that about one in 1,000 centenarians reach 110 years old, or supercentenarian age. The Gerontology Research Group, a global group of researchers founded in 1990, which maintains a list of the oldest verified living people, estimates there should be between 300 and 450 supercentenarians in the world.

Not that Orphea Mattsfield would be all that interested in the statistics. For her, life just keeps moving on.

She was born Orphea Potter and grew up on a farm in Ellsworth Township with her parents, four brothers and a sister. She has outlived all her siblings.

She married Henry “Henny” Mattsfield in 1932, and they lived on his 180-acre farm south of Lake Manuella where they raised dairy cows and mixed crops.

“We were a pair,” Mattsfield told the Independent Review in an interview before her 102nd birthday in 2013. “He ran the combine and I unloaded the corn. I enjoyed field work. We used to think, ‘Oh, the poor men in the field,’ but it was hot in the kitchen, too. But to just sit on the tractor and plow and watch the birds fly, that was nice. It was good. We enjoyed just farming together.”

Mattsfield didn’t complete high school, but later in life attended business training in Hutchinson, and went on to work for the local U.S. Department of Agriculture office for 12 years.

They moved to Ecumen in 1997, and Mattsfield said some of her happiest memories were of their retirement years. They wintered in Arizona after moving to Emmaus Place, in addition to traveling to places like New Zealand and Hawaii. They also enjoyed square dancing. Henry died in 2006, two months before their 74th wedding anniversary.

They never had children, but they gained a son in West, who grew up on a farm near the Mattsfields and became like family through the years. The Wests bought the Mattsfield farm in the early 1980s, a sale contingent on the Mattsfields being allowed to keep their mobile home on the farm as their summer home.

Abel West and his wife Kara, along with their 1-year-old son, Avry, live on the farm place these days. And they all came to celebrate with Mattsfield Friday.

“Grandma Orphea, she would babysit me all the time, you know, if dad was in the field,” Abel said. “I’d go down to Grandma’s and spend the afternoon there. That’s a good memory for me.”

The Wests visited the Mattsfields in Arizona in the winter, celebrating birthdays and Christmases there.

“They adopted us and we adtoped them,” Abel West said. “And it was just fun.”

And to see Mattsfield enjoying her day in the spotlight was special, they said. A special day for an “amazing” woman, they said.

“Whenever I’d have to take her to the hospital or to the doctor or whatever, they would ask for her birthday, and I would give it to them, and they would say, ‘What?’” Alan West said. “People are amazed by her.”

Asked the secret to a long life, Mattsfield didn’t really offer pointers to aging gracefully. Rather, it was more about living happily.

“Live life to the fullest,” she said. “Take every day as a blessing.”