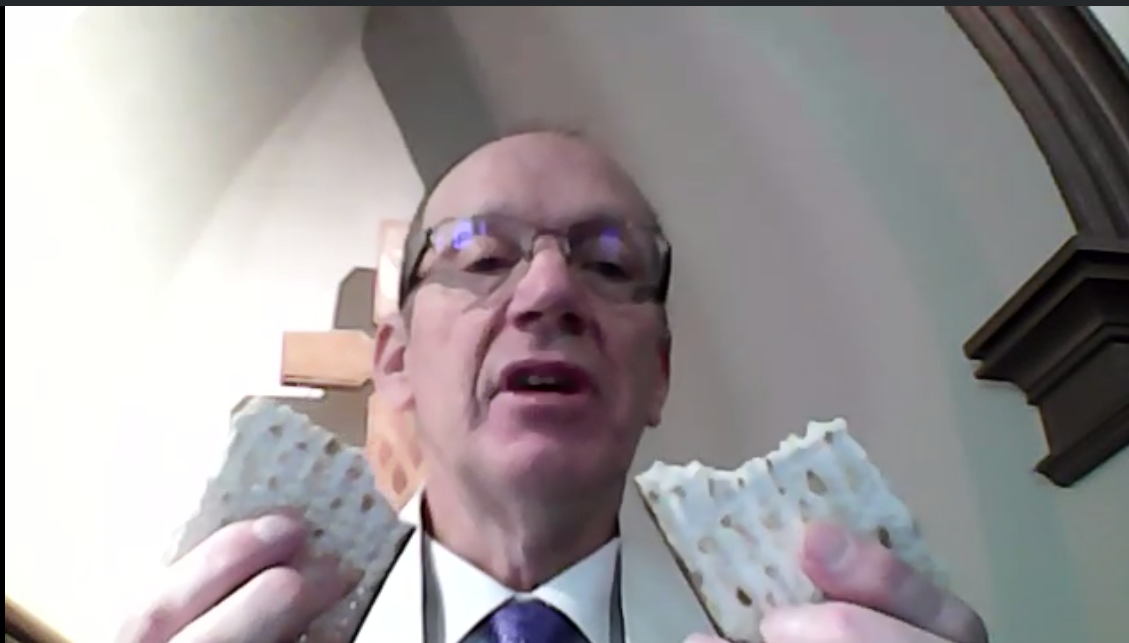 Gordy Pennertz, lay pastor at First Presbyterian Church in Litchfield, breaks bread for communion during Sunday’s service. During the “virtual communion” participants were encouraged to have bread or crackers and juice. While some ministers in the presbytery were concerned about the scacred nature of communion this way, Pennertz said, “I do not worry about that one bit .. about consecrating it through the airwaves. God’s just as much in the airwaves as he is in the pew.” 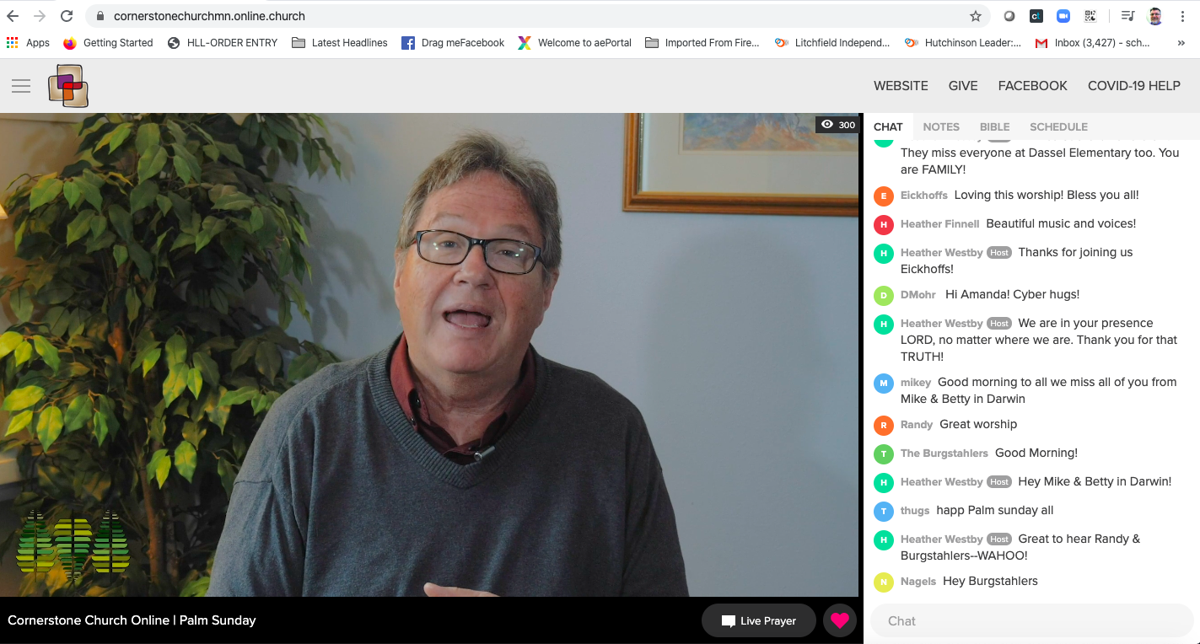 Cornerstone Church in Litchfield streams its services on its website, with the stream including a live chat session. 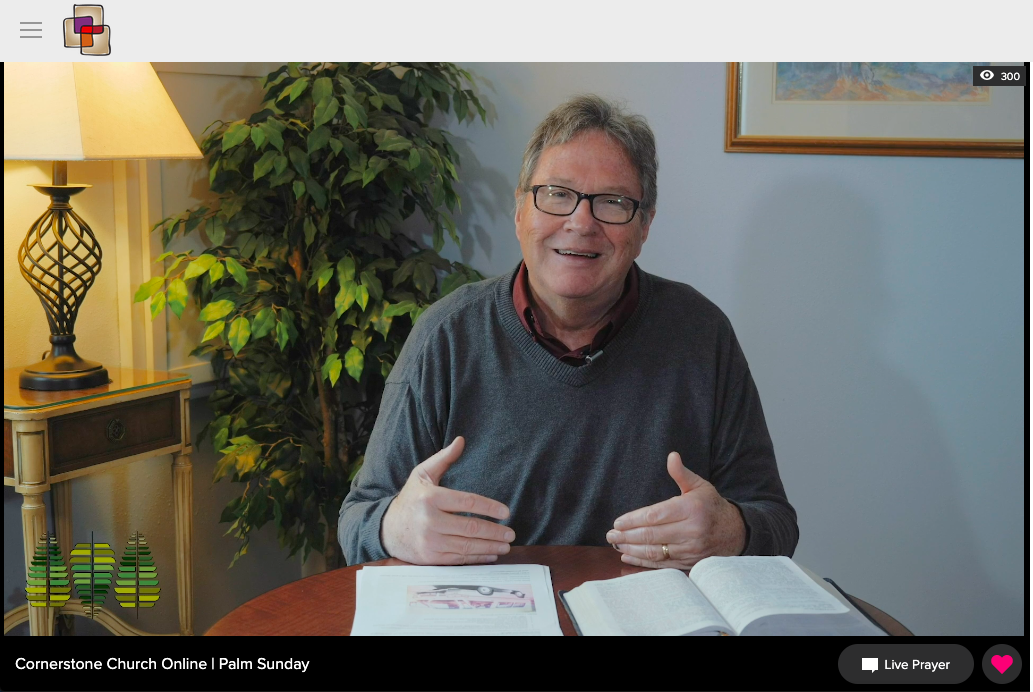 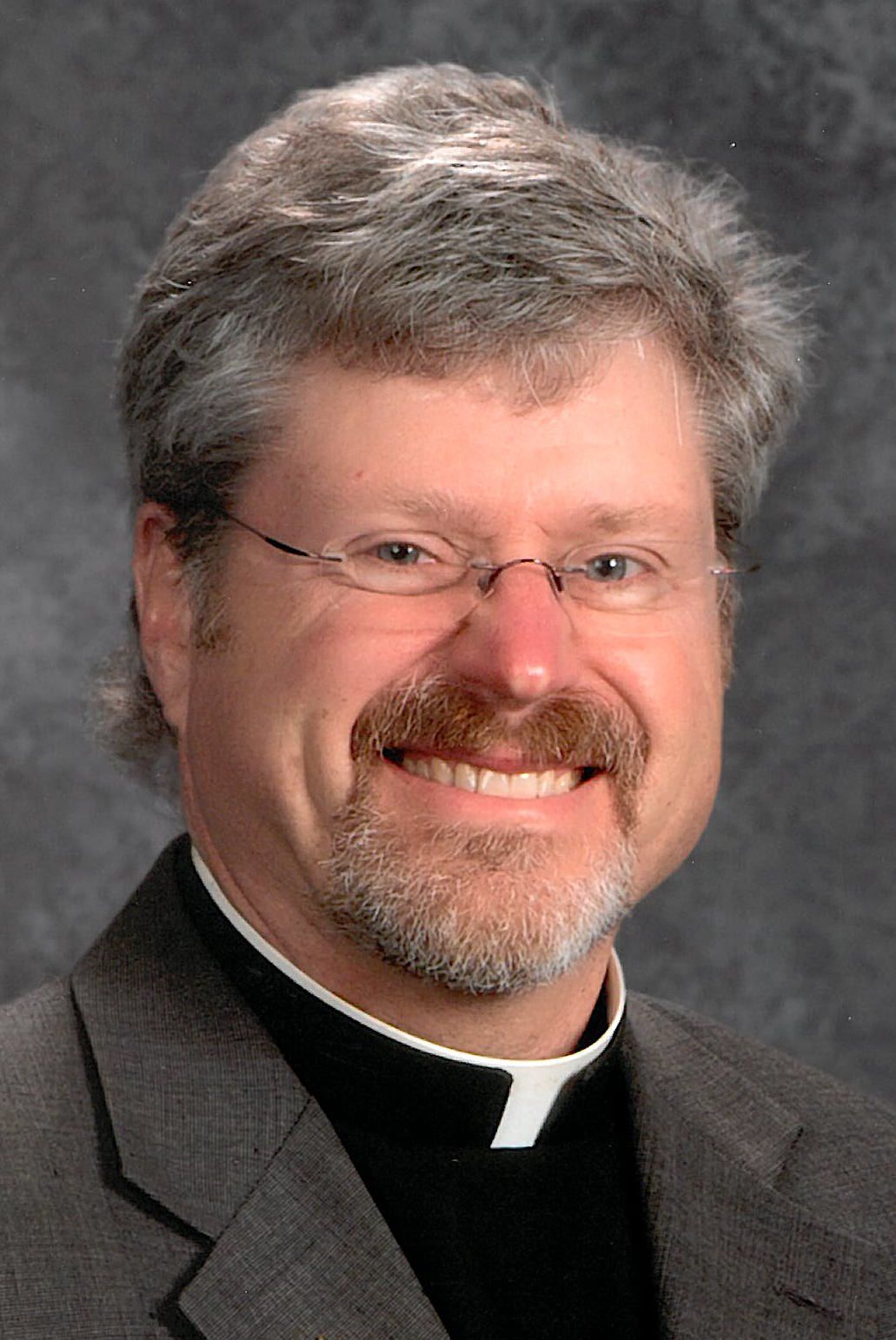 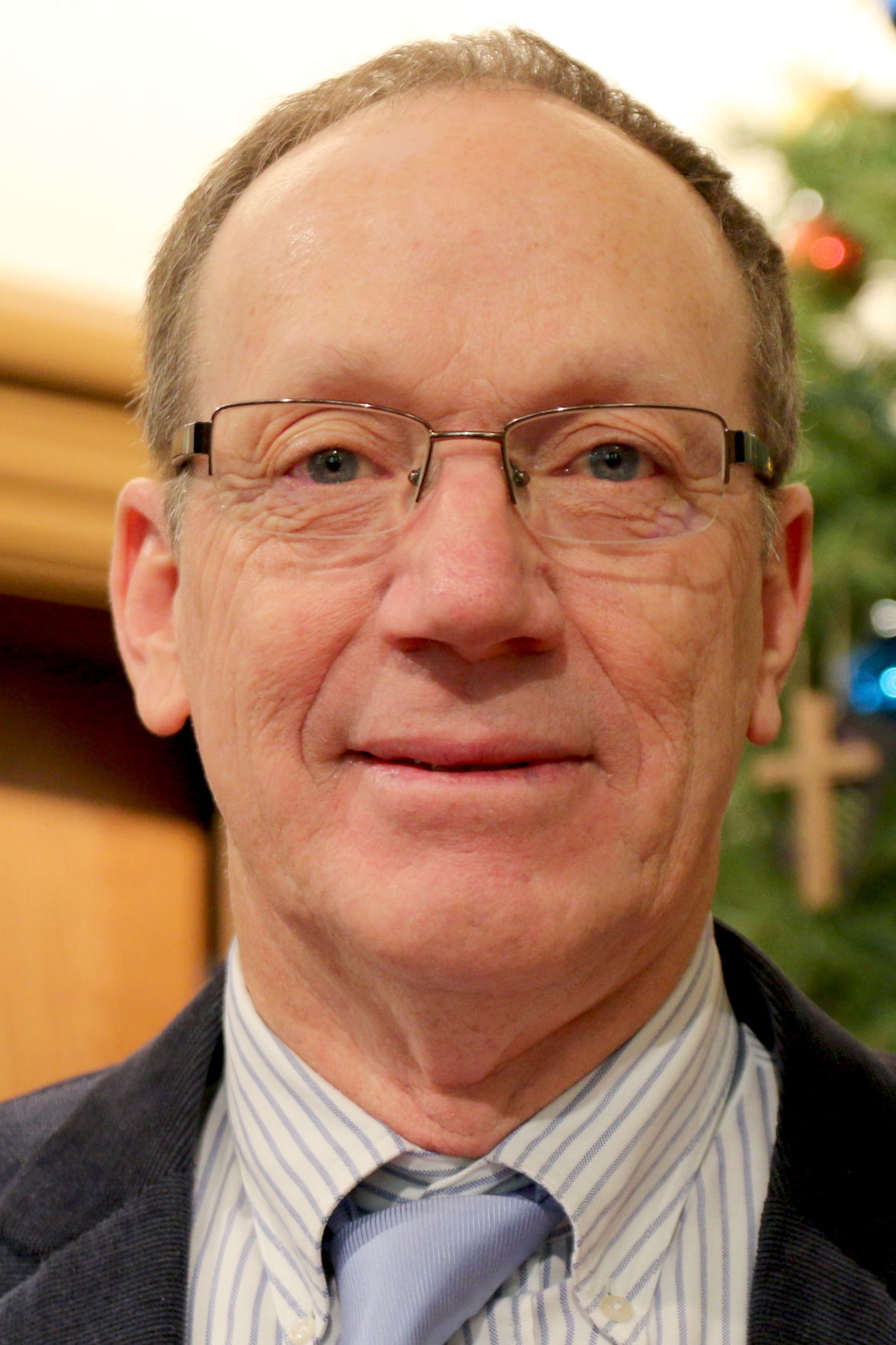 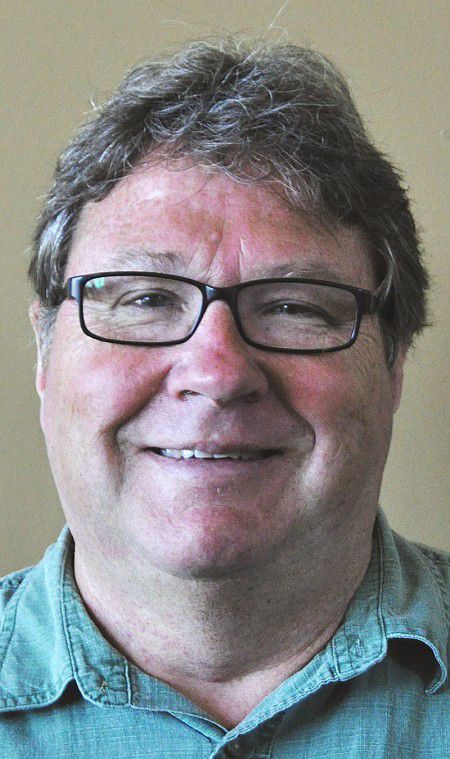 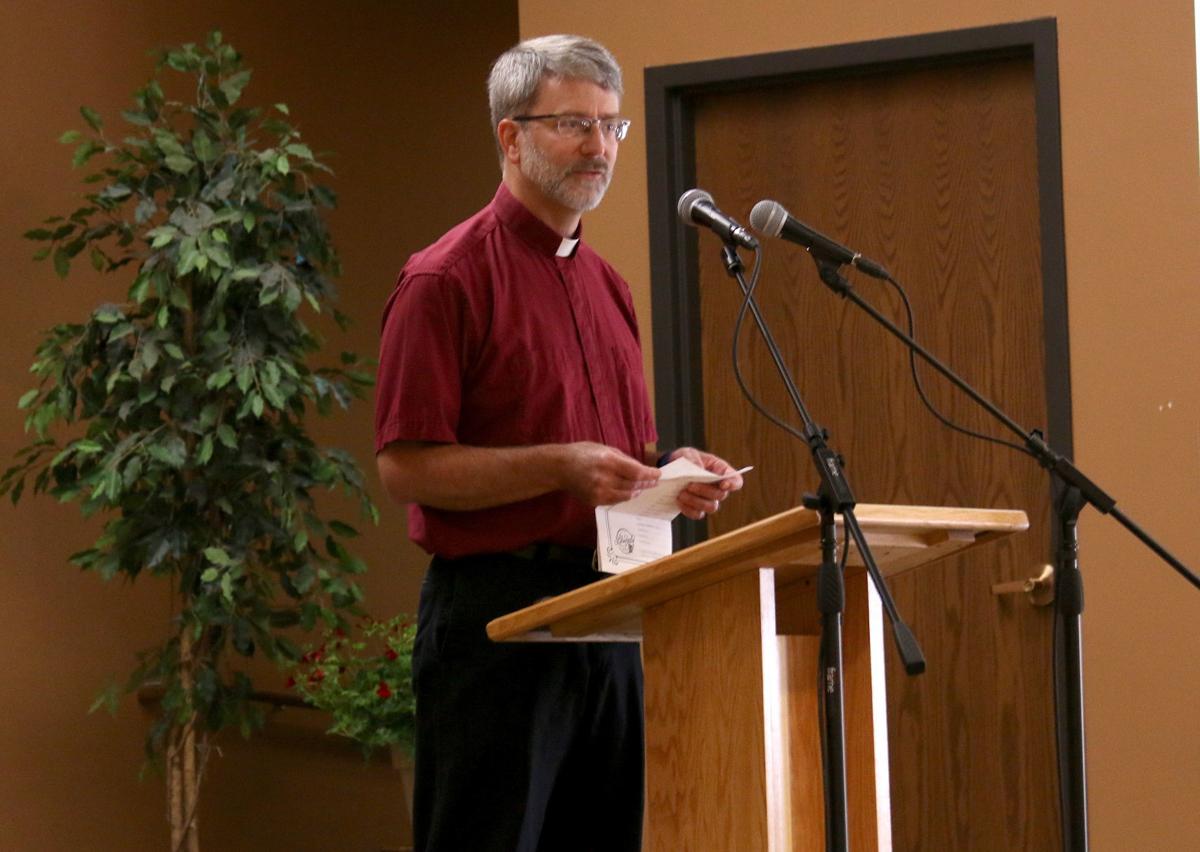 Gordy Pennertz, lay pastor at First Presbyterian Church in Litchfield, breaks bread for communion during Sunday’s service. During the “virtual communion” participants were encouraged to have bread or crackers and juice. While some ministers in the presbytery were concerned about the scacred nature of communion this way, Pennertz said, “I do not worry about that one bit .. about consecrating it through the airwaves. God’s just as much in the airwaves as he is in the pew.”

Cornerstone Church in Litchfield streams its services on its website, with the stream including a live chat session.

That Pennertz, the church’s lay pastor, said a cheery “Good morning,” or “Welcome to worship” to each individual was not at all unusual. But the setting in which the greetings were offered — on computer screens spread from Litchfield to Oregon — was far beyond the norm.

Although, after three weeks of worship via the Zoom computer app, many members of the congregation seem to be adapting well to the new normal of coronavirus pandemic-forced separation.

“We’re making do the best we can,” Pennertz said. “It’s not the same as having people there (in the church), but it works.”

That thought was echoed by other pastors in the area, all of whom have had to find new ways to tend their flocks during a time unlike any have seen — or could prepare for — in their lifetimes.

The important thing, repeated by each pastor in conversations last week, was trying through all means possible to maintain the bonds of faith and community that are built when congregations gather in person on Sunday mornings.

“We continue to gather, we just gather in other, virtual ways,” said the Rev. Christian Muellerleile, pastor at Zion Lutheran Church in Litchfield. “I’ve been using the language of gathering, just different than we have in the past. That seems to be a helpful framework for people.

“It’s a difficult time, but when we think of what do we still have — we can still gather,” he added. “Churches are still gathering, just in different ways.”

Minnesota Gov. Tim Walz issued an executive order March 15 closing schools throughout the state, then on March 16 issued an order that bars and dining establishments be closed. Schools have adapted by implemented distance learning plans. Many restaurants have implemented take-out and delivery options to maintain at least some of their business.

Churches have had to find ways to continue their mission, as well, as guidelines for group gatherings and social distancing became more stringent, and the governor’s stay-home order which went into effect March 27 solidified the restrictions.

The orders, “to the governor’s credit,” said the Rev. Troy Pflibsen, co-pastor at Zion Lutheran Church, have excluded ministers and church administrative staff from the stay-home restrictions. That made it possible for worship teams to organize not just Sunday services, but other outreach ministries.

As he spoke with a reporter by telephone Wednesday afternoon, Muellerleile said he was preparing a lesson for a youth class he would teach via Zoom video conferencing.

Some churches have used Facebook Live to broadcast their Sunday services, others have recorded their services and made them available on You Tube or streaming from the church website.

Zion Lutheran Church has, for many years, broadcast its Sunday service over the airwaves at KLFD-1410, and on the local cable access channel on taped delay basis. But the church has upped its commitment to new communication platforms in recent weeks, including Pflibsen sendsing email “words of encouragement” a couple of times a week to the congregation.

Cornerstone Church has offered live-streaming of its services the past three weekends. While it can be difficult to feel the personal connection during a video stream, Cornerstone employs a messaging application and designated discussion hosts, allowing congregation members to greet each other and offer comments or praise during the service.

“I would say this … God has imbued human beings with the ability to be creative and to be adaptable and use the resources available to continue to do His work,” the Rev. Paul Jorgensen said. “Our people that are involved in worship ministries (and) student ministry … they’ve been invaluable. On March 16 at 10 o’clock before the governor issued his order, we didn’t know how to stream, but by 2 (p.m.) we did. That’s a credit to that team and what they were able to put together.”

And everything is in play, Jorgensen said, when it comes to Cornerstone’s outreach programs —from video conferencing for Bible study, to instant messaging prayers, even the “old” technology of telephone calls for counseling.

“It’s really something,” Jorgensen said. “People are really, truly wanting to experience God, maybe even moreso now, and we have people finding ways to make that possible. We are using technology to fundamentally change how ministry is done.”

The Rev. Jeff Horejsi said that adapting to life without Mass inside the churches of the Shepherd of Souls Area Faith Community, which includes St. Philip’s in Litchfield, Our Lady in Manannah and St. John’s in Darwin, has been difficult for staff and members of the congregations.

“I know everyone is concerned and a bit upset in their life, I would say,” Horejsi said. “It has been exceptionally different, especially not having gatherings for the Masses on the weekend. We’re struggling to adjust and adapt to ways we can reach out to people.

Horejsi and senior associate pastor the Rev. Brian Mandel have celebrated Mass the past two weekends, with the service recorded and uploaded to You Tube and available on the church's website.

Though the latest guidance from Bishop John LeVoir of the Diocese of New Ulm called for all Masses to be suspended through Easter, Horejsi said, he expects that to be extended again. And that will mean continuing to refine the technology and various methods of outreach employed by the church.

“It’s going to be a very different Holy Week, that’s for sure,” Horejsi said of the coming week, which includes worship services for Holy Thursday, Good Friday and Easter. “We will be encouraging people to celebrate as they’re able, within their households and to take time for prayer.”

“I’m already hearing from folks who are grieving, I mean really grieving that loss,” Pflibsen said of no in-person worship during Holy Week. “It is a big family time. That won’t happen now, so there’s a lot of loss, a lot of grieving.”

And yet, while faith life has been turned upside down during the past few weeks, positives can be found without looking too far.

“In the midst of the struggle, I think we’re finding blessing,” Pflibsen said, repeating stories of families who have found more time to be together.

“The message of Easter weekend … is, it’s Friday, but Sunday’s coming,” Cornerstone’s Jorgensen said. “I think we carry that over to our lives. It’s Good Friday, it’s difficult. But Sunday’s coming … it will be good.”