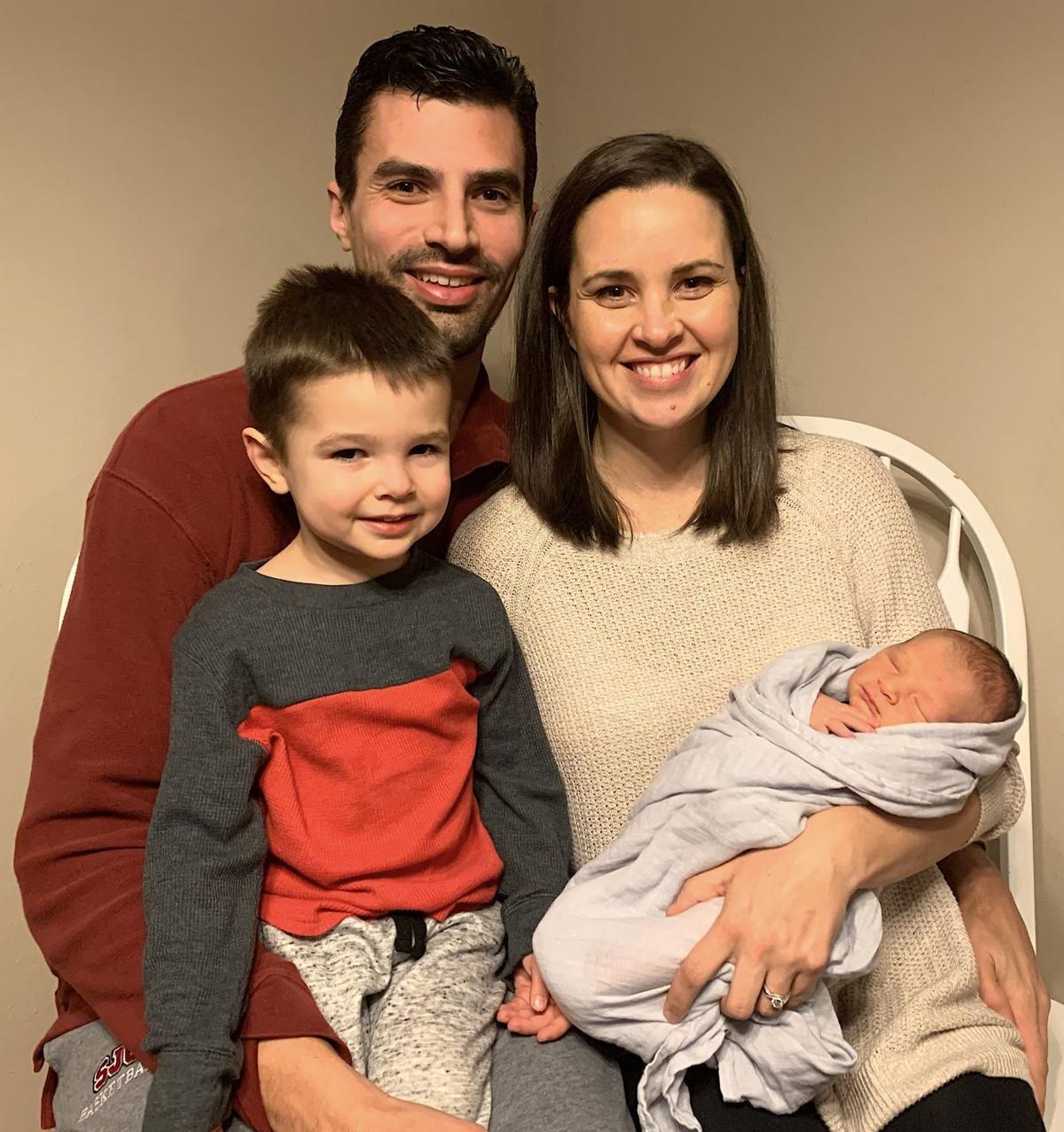 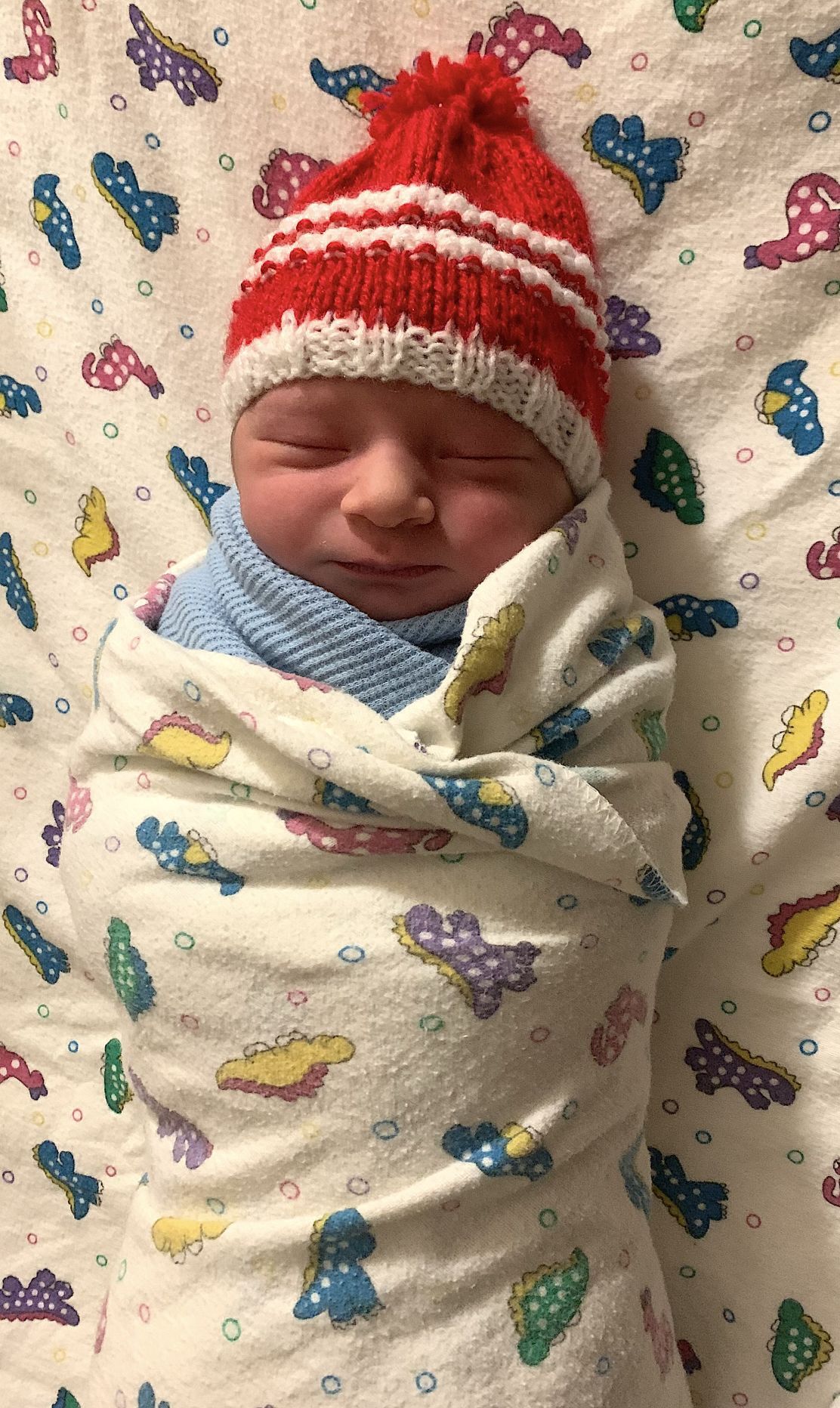 Nash Aaron Traut was born at 12:08 a.m. Jan. 2 at Meeker Memorial Hospital. He shares a birthday with his mother, Jill, and his middle name with his father, Aaron.

Nash Aaron Traut was born at 12:08 a.m. Jan. 2 at Meeker Memorial Hospital. He shares a birthday with his mother, Jill, and his middle name with his father, Aaron.

Since their first child arrived five weeks early, Jill and Aaron Traut did all they could to prepare for an early-arriving second child.

That was a good thing.

Gathered with family for an early celebration of Jill’s birthday the evening of Jan. 1, nature took its course.

“We were actually having a birthday cake at my in-laws, and that’s when my water broke,” said Jill, who was still three weeks from her due date. “It was like, ‘It’s time to go!’”

For some, this might have been a frightening or at least nerve-racking experience. But given their experience with the birth of their first child, Hayes, three years ago, they were ready. The Trauts already had a hospital bag packed and in the car, and they were soon on the road to deliver what would become the first baby of the new year at Meeker Memorial Hospital.

They fog-shrouded drive from Cold Spring to Litchfield took a little longer than it might have under clear conditions, but they arrived at Meeker Memorial at about 11 p.m.

Waiting just long enough to share his mother’s birthday, but arriving in plenty of time to be the hospital’s first baby of the new year.

She explained that 3-year-old Hayes was “still working at” his role of big brother, because “sharing the attentions with Mom and Dad with somebody new has been a learning curve, but he’s doing good.”

The Trauts also expressed appreciation for the Meeker Memorial Hospital staff and their experience at the hospital. COVID-19 restrictions meant only Aaron could be at the hospital with his wife during and after the birth.

“It was kind of unfortunate, but it ended up being just fine,” she said. “Aaron and I talked after we left (the hospital), and we both said it was awesome. There’s just something about the nurses, the staff. The whole experience went really well for us.”

Jill Traut grew up in Meeker County, and when she became pregnant the first time, the couple chose Meeker Memorial Hospital. That decision was due in part to their wish to have a “small hospital” experience. But it also was a geographic decision, because they lived in rural Cold Spring, while Jill worked in Hutchinson, and Aaron, a certified public accountant, worked in St. Cloud, so Litchfield represented a kind of midpoint.

That plan changed, however, when she went into labor five weeks early — too early to be delivered at MMH. So, Hayes was born at the St. Cloud Hospital, which Jill Traut said was a good experience, too.

But Meeker Memorial offered a different kind of comfort level for her, especially her physican, Dr. Cassandra Bulau.

“She was actually my bus buddy,” Traut said, recalling riding the bus to school in Litchfield, when young students were paired with older student “buddies” to ease apprehension. “That’s kind of a fun connection we have.

“I’ve been seeing her since she started her practice in Litchfield,” Traut added. “I’ve known Dr. Bulau my whole life, so it was nice that she could be the one to deliver for me. Thank goodness she lives relatively close (to the hospital) or she might not have made it.”