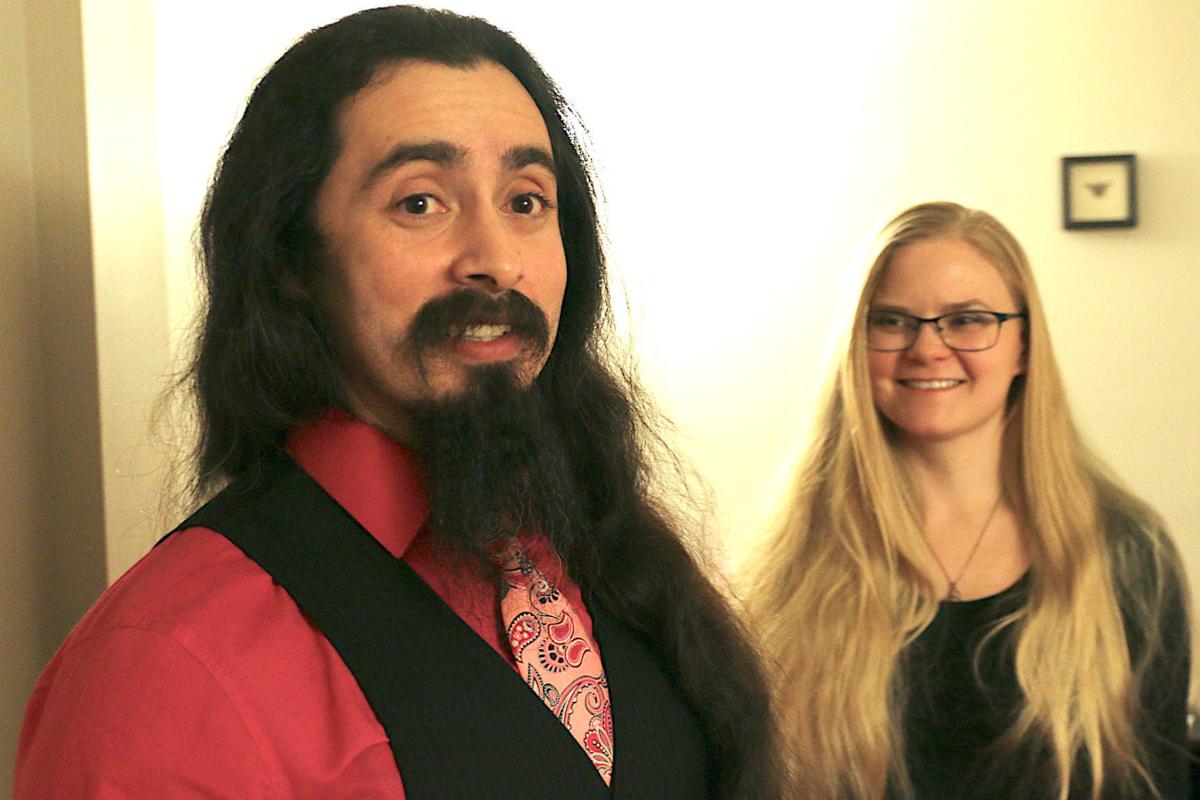 Hannibal Wolong and Azalea Wolong share their passion for providing alternative medicine to people in Meeker County and surrounding areas. 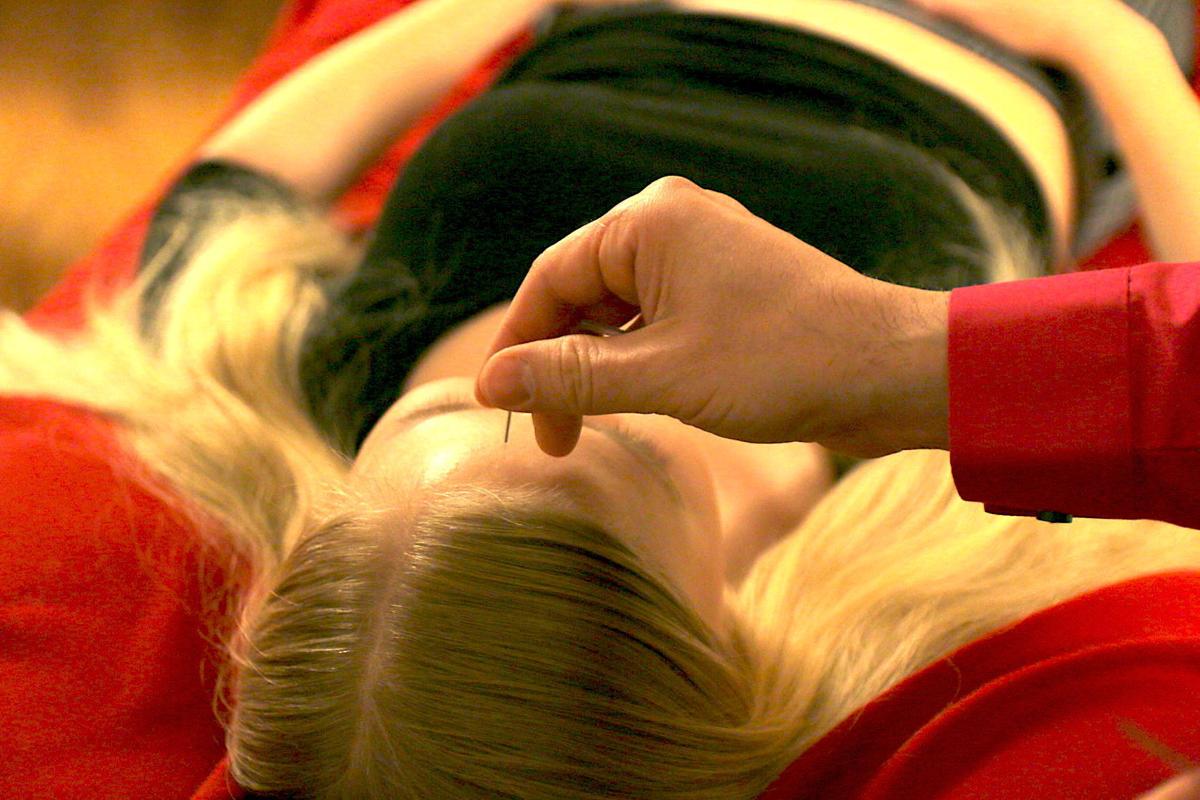 The first needle Wolong inserts into a patient’s forehead is called the governing vessel, which can help relieve stress. 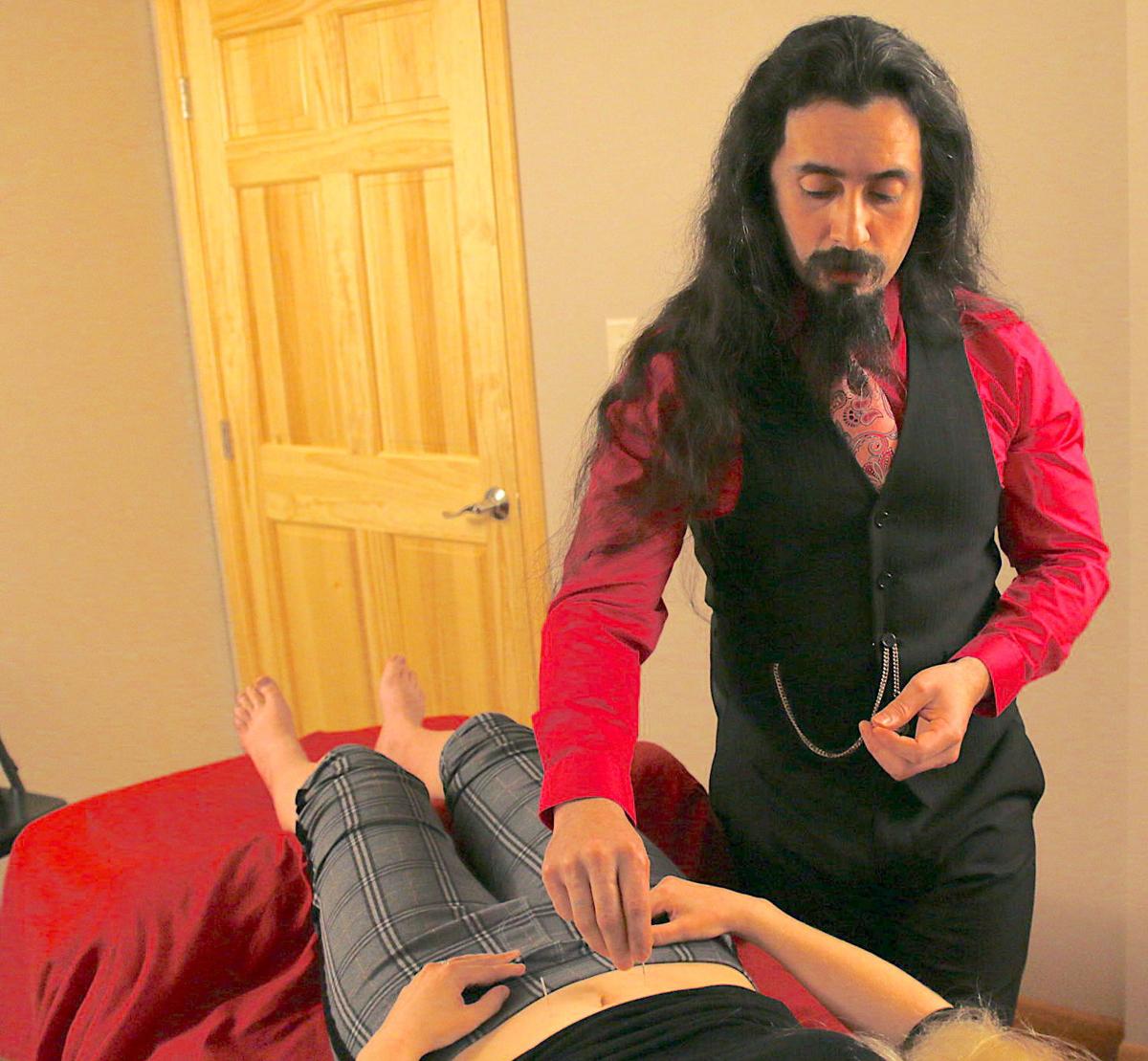 Wolong taps a needle into a patient’s stomach meridian. 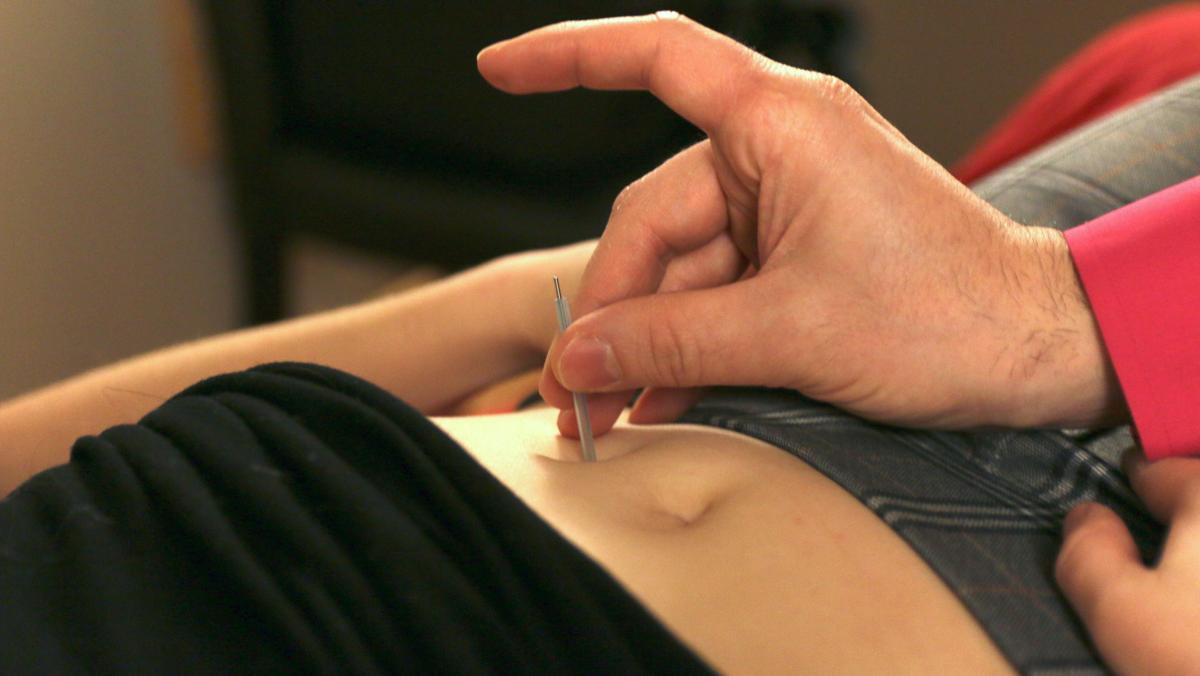 A needle placed in the stomach meridian can help promote functions of the intestines, clear heat, relieve retention of food and other symptoms, according to Hannibal Wolong 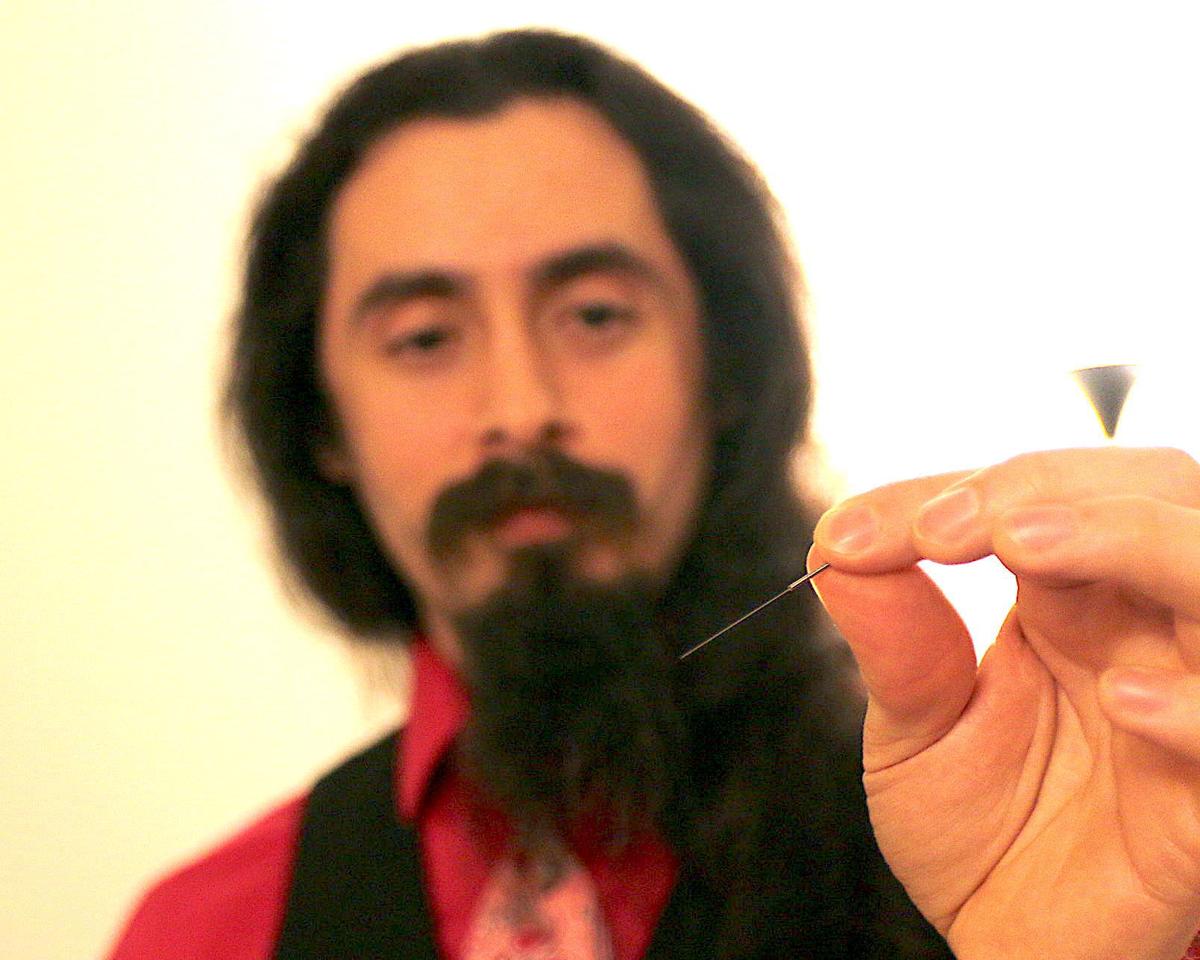 Hannibal Wolong holds a tool of his trade — the acupuncture needle. 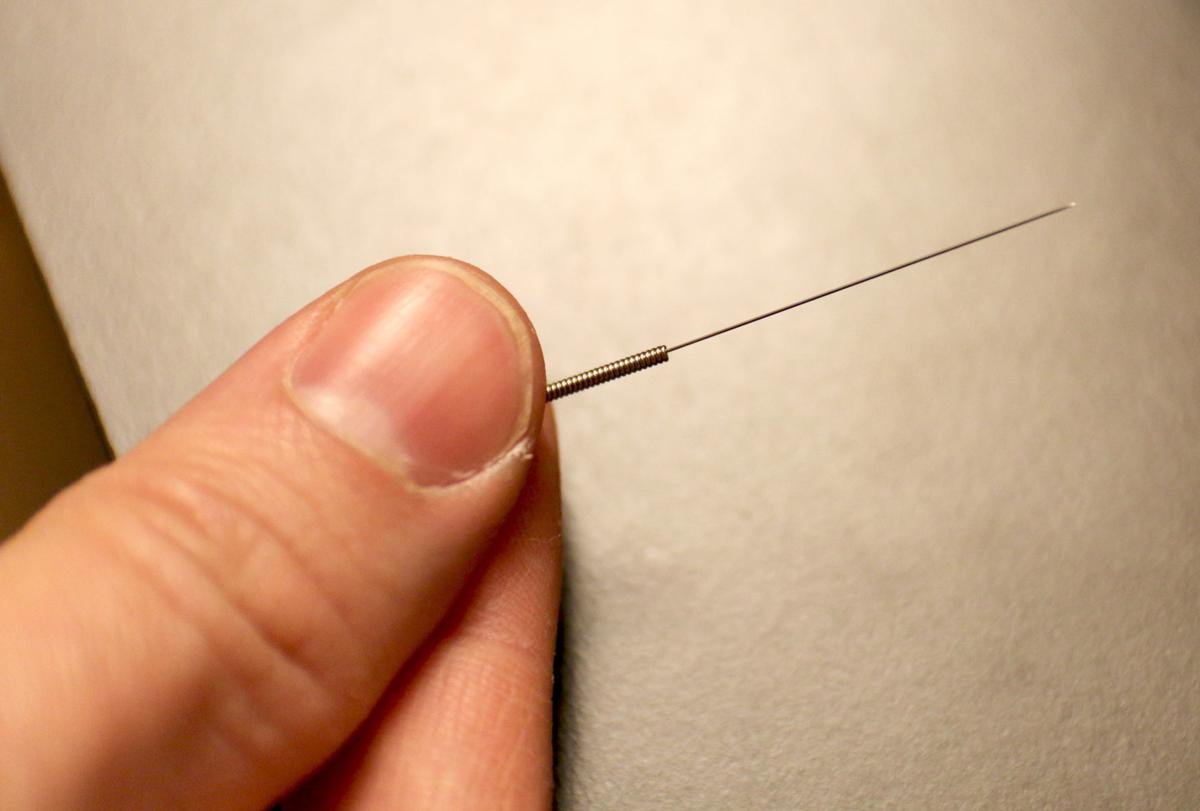 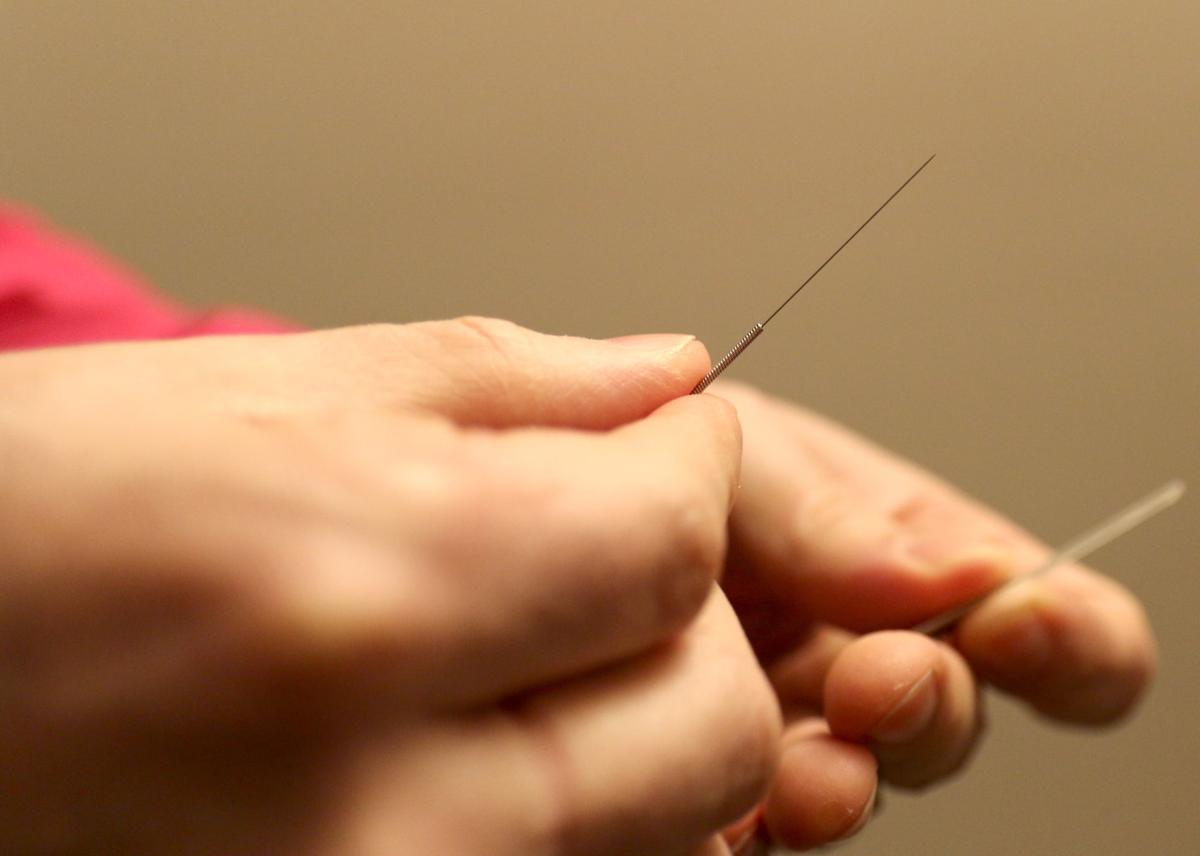 Hannibal Wolong and Azalea Wolong share their passion for providing alternative medicine to people in Meeker County and surrounding areas.

The first needle Wolong inserts into a patient’s forehead is called the governing vessel, which can help relieve stress.

Wolong taps a needle into a patient’s stomach meridian.

A needle placed in the stomach meridian can help promote functions of the intestines, clear heat, relieve retention of food and other symptoms, according to Hannibal Wolong

Hannibal Wolong holds a tool of his trade — the acupuncture needle.

Holistically viewing what is wrong with a person is essential to acupuncturist Hannibal Wolong.

While in modern medicine, diagnosis of symptoms is broken down to simple parts, Wolong looks to understand the whole of his patient’s condition — physical and psychological — for a thorough analysis, he said.

Failure to see the whole patient is a shortcoming of patient care in modern medicine in Wolong’s view.

“Say if you go to a gastroenterologist,” Wolong said, “that's specifically what they focus on, they will try and find out what is wrong specifically with the GI and not pay any attention to the heart, or the muscles. Or if you go to somebody for infertility, they're going to look at the uterus … they're going to focus on your hormones, but they're not necessarily going to look at your psychological perspective.”

Wolong practices acupuncture at Sleeping Dragon Acupuncture clinic in the artisan building, 207 N. Sibley Ave., in downtown Litchfield. An age-old healing tradition in Chinese medicine, acupuncture involves the insertion of thin needles at specific points on the body. It can be used to treat pain, stress and overall wellbeing, according to Mayo Clinic.

Although some medical professionals view acupuncture as witchcraft or pseudoscience, modern texts confirm the practice as having beneficial effects on the body, Wolong said, explaining that he has been able to help people with insomnia, diarrhea, constipation and other psychological and physical problems, the past seven years.

Wolong’s birthname was James Franco, but he never felt like a James Franco, he said. It was around age 12 when he first thought about changing his name.

“My last name, Wolong, is 'sleeping dragon,' but that was the nickname of the strategist from the Three Kingdoms period in China … then you look at Hannibal Barca (who) went up against Rome, back when Rome was a power, and he brought an army through the (Swiss) Alps, which they said … was absolutely impossible.”

No matter what strategies Rome tried against Hannibal, they could not defeat him, Wolong said. The intellectual capabilities shown by Hannibal Barca and former Chinese military strategist Wolong impressed him, Wolong said.

“It’s not that I feel I’m on par, but I feel like by taking that name, it gives me something to live up to,” he said. “Like I have to earn that name. I have to excel, be the best I could be at whatever it is I happen to be doing, because that’s what these people would be doing.”

Growing up, Wolong learned martial arts from his father. He said the points on the body one learns about in martial arts are the same in acupuncture, but they’re used differently.

For many years, Wolong worked in different factories, sold knives and insurance, and did construction work. But he eventually realized if he did not find his passion, he would continue to dread going to work.

“And that’s not a good life to live,” Wolong said. “I was originally torn between going to school for psychiatry or Chinese medicine.”

Wolong discovered acupuncture. He first received an associate degree in massage therapy and then earned a master’s degree in Traditional Chinese Medicine from the American Academy of Acupuncture and Oriental Medicine in Roseville.

At work, when approached by a patient with depression, Wolong will not assume it is simply a neurological problem. Wolong delves into his patient’s overall health, how their condition is fluctuating, how well they are eating and more, he said.

“In Chinese medicine, they say that the spleen and stomach are the central pivots of postnatal essence,” Wolong continued. “And that's a very esoteric way of saying, if your digestive tract isn't healthy, nothing's going to be healthy — and that's very true.”

People who have suffered physically or psychologically store the chronic pain in the body, Wolong said.

“Active (acupuncture) points are almost like psycho-emotional memory banks,” he said. “Like you just have stuff stored in them. And there are times where you'll needle one (and) when it releases, the person will just have an emotional reaction.”

Wolong’s wife, Azalea — formerly Amber Johnson — provides massage and cupping therapy, which helps with pain, inflammation, blood flow and others at the same location. Azalea commends Wolong’s depth of knowledge and learning about his work and the human body, which has inspired learning in herself, she said.

“So I do have admiration in how much work he puts into learning and then applying what he learns to benefit the lives of other individuals,” Azalea said. “Especially if someone comes in with a problem or an issue, he'll do his utmost best to come up with a good treatment plan that ends up fitting each individual's needs.”

At age 18, Azalea ruptured her right knee’s tendon, and after surgery doctors said she wouldn’t be able to work out or kneel on that knee anymore. But the Wolongs did not accept that diagnosis.

“We came up with a protocol for her knee,” Wolong said. “That component combines traditional Chinese medicine ideas along with modern medical acupuncture ideas, to treat points as well as reduce inflammation and bring more health to the knee, and because of that, Azalea can use the knee regularly. She goes to the gym. She does squats.”

Wolong loves helping people through acupuncture, and he said it’s “incredible and amazing” that he can spend his days living by making people’s lives better, or empowering people to do the same, he said.