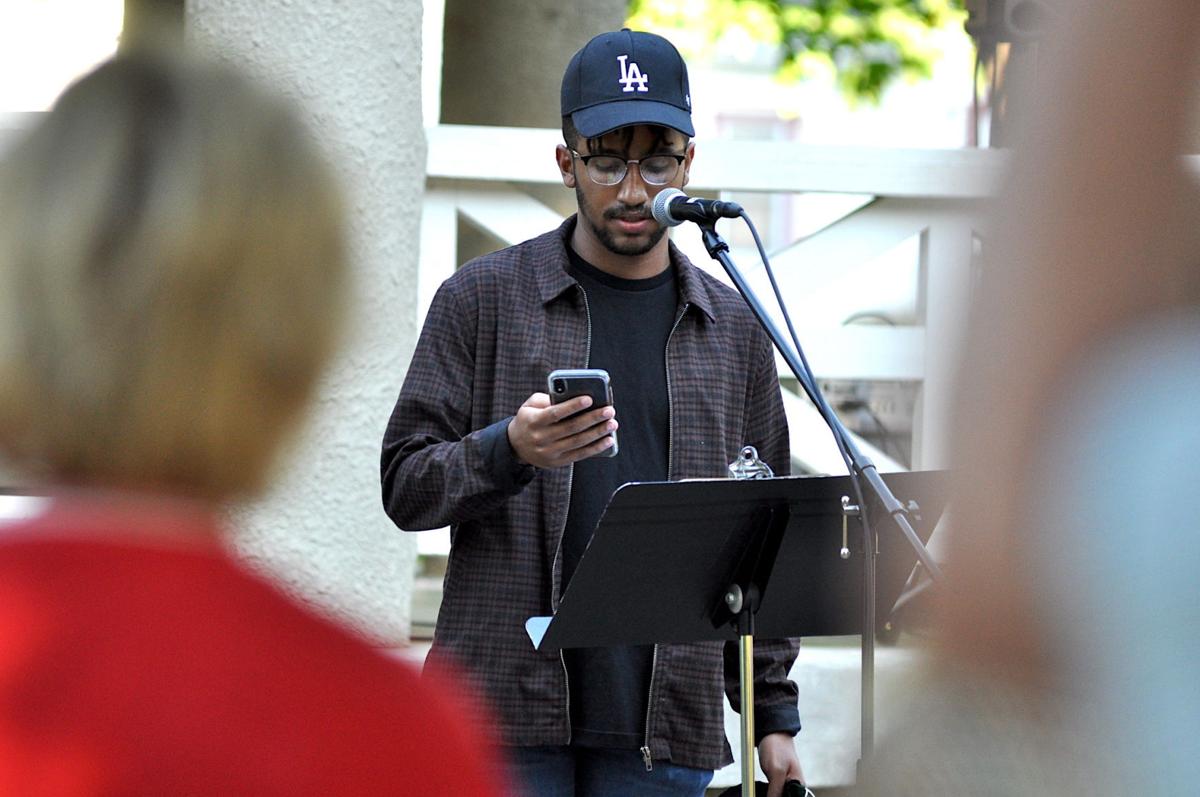 Noah Kreger speaks during a vigil last June in Central Park in Litchfield following the killing of George Floyd in Minneapolis. Kreger, a 2017 Litchfield High School graduate, will be host to two community conversations about race June 8 and 22. 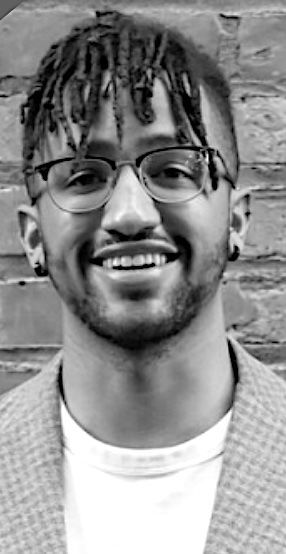 Near the end of an interview in which he talked at length about the challenges and disappointments of growing up as one of the few black children in town, Noah Kreger stopped, as if to set the right tone for everything that had come before.

“One thing that I kind of want to add is that, in growing up in Litchfield and enduring the challenges of being the only black person … that really did mold me into a certain type of person,” said Kreger, a 2017 Litchfield High School graduate who graduated from the University of Minnesota this spring. “It made me seek out certain challenges and face things head on.”

It is that history and that person he has become that prompted Kreger to contact Litchfield Community Education earlier this year to set up two meetings in June, in which he hopes to bring the topic of race out into the open in his hometown.

“Let’s Talk: A Community Conversation on Race & Racism” is set for 6-8 p.m. June 8 and 22 at Litchfield High School. As the name of the meetings implies, Kreger said, he’s inviting people to have a conversation about a topic that doesn’t often happen in a public forum in Litchfield. The two nights aim to “create an outlet for powerful conversations, expand knowledge, and create a support network for the Litchfield community,” according to a promotional poster Kreger put together.

Though some who live here might think that race and racism are big-city topics that are best left for big-city forums, Kreger believes it’s important to have this type of conversation everywhere and anywhere. Especially these days.

The killing of George Floyd in police custody in May 2020 in Minneapolis struck a chord with many, including Kreger. When a local group planned a vigil in Central Park last June, one of the organizers, who attended Litchfield High School with Kreger, asked him if he would speak.

It’s the kind of thing that happens when you’re a minority in a rural Midwestern town, and it could have been uncomfortable, but Kreger said he knew the group and the event had the right intentions.

“You know, there’s an aspect of tokenism, where you kind of are put on a pedestal, just to be a placeholder,” Kreger said. “And I wouldn’t have done that if I thought that’s what it was going to be like. But I truly thought that everybody that I worked with last summer really, you know, they wanted to spread a message, and they really wanted to impact the Litchfield community. And they gave me free rein for whatever I wanted to say, whatever I wanted to do. So, that helped a lot.”

And it got him thinking — remembering — some of those difficult times growing up as one of the few black people in Litchfield.

Kreger and his mother moved to a home on Lake Washington, and he began attending Litchfield Public Schools when he was in second grade. After spending his first seven years growing up in the Minneapolis suburb of St. Louis Park, the move to a small town was noticeably different, even for an 8-year-old.

He made friends and he had fun, but Kreger never forgot that he was different.

“I struggled with my racial identity so much until, honestly, until I was living in Minneapolis,” said Kreger, who moved to the Twin Cities to attend the University of Minnesota. “My friends are black now, and I’m so glad I get to share their perspective. But before that, it was just tough, because I really didn’t have much of an outreach for that. Even the summer basketball teams I played on, they were pretty much all white. Everything around my area was white.

“So, I really came into my racial identity and became more proud and outspoken about who I am in my race, definitely, when I moved to Minneapolis,” he added.

Until then, though, Kreger endured. He heard the racial slurs from those intending to hurt him emotionally. But perhaps even more painful were comments from supposedly well-meaning people who seemed surprised by the mental aptitude of a black kid.

“I began to deny my blackness and who I was, I began to become complicit with the racism around me, because I didn’t want to be the stereotypical angry ghetto black man that so many of my peers talked about,” Kreger said during his speech at last June’s vigil. “I started hiding my emotions when I would hear or be called the N-word, ‘boy,’ ‘Blackie.’

A National Honor Society inductee and academic success, Kreger said he also heard, “Oh, well, you’re so much different than I expected,” and “Oh, well, you speak so well for a black guy.”

Going away to college, Kreger said, allowed him to become unfettered by the small-town norms and attitudes. He continued his academic success, earning his way onto the dean’s list at the U of M multiple times, and he has grown more confident of who he is and what he wants to do.

And that’s what will bring him back home in a few weeks.

“One thing that I’ve learned, especially the last four years, is that what it took for me wasn’t a matter of courage per se, it was honestly just a matter of growing and having different perspectives and meeting new people and talking to people from different cultures,” Kreger said. “Once I could do that, once I could have black friends, once I could be open with them about things that I can relate with them on, then it just became so much easier.

“I think the reason that I probably withheld a lot was because I just didn’t feel like anybody would maybe understand my perspective, since it was so different, and since I didn’t see many people that looked like me,” he added. “I don’t think it was anybody’s fault. I think a lot of my friends that have gone to college have had that, too. Growing up in Litchfield, I was their only black friend, and probably the only black person that they really knew on a personal level. And once they were able to leave, go to college, them having those experiences definitely made them grow, too.”

That diversity of perspective is what Kreger hopes he can bring as part of “Let’s Talk: A Community Conversation on Race & Racism.” Having earned a bachelor’s degree in sociology from the University of Minnesota, and now looking at pursuing a degree in law at a historically black college or university, Kreger believes he can facilitate a meaningful conversation on race.

He was encouraged to pursue the events, in part, because of the reception his remarks at last summer’s vigil received.

Classmates and others who weren’t at the vigil itself contacted him after seeing news coverage or watching a video of the event on YouTube.

“I had some people apologize to me, but I, I was just happy that they were thinking about it,” Kreger said. “I understand, especially if you stay in a super white space your whole life and don't experience much diversity or hear much perspective from people of color or even try to, it's not ignorance, but it's just, I don't know, you're just blinded by a lot of things. You don't realize a lot of things. So, yeah, it was positive outreach, and some apologies, but it was all good.”

He says he was sitting in a chair in his Minneapolis apartment one day a few months ago when it hit him — “I want to lead a discussion on racism in my hometown, in Litchfield.”

“It's just really something that I think that that can be impactful,” Kreger said. “And I I want everyone to feel welcome to come. I want totally different perspectives. And I want people to speak from their heart and let out what they feel. You know, I've already received emails from people that are interested, talking about how, ‘Hey, thank you for doing this.’

“It’s just something that I want to do that I think can help,” he said. “It starts with acknowledging that you are in a segregated area. And you are neglecting to speak about this because it is really, I mean, it's such a big issue, right? And by doing that, you're not necessarily being a part of the problem, but you're not helping at all right? So, just because you're in a closed off, small community, that doesn't mean that you get to ignore the facts of the world, right? So, if I can get that point across, realize that you're in a white space. Realize that you may never talk about this in your life, you may think about it all the time, you may not. But it should be a cognitive thought you are able to discuss about, and if this is the outlet for it, then I think that that's a huge impact.”

What: Let's Talk: A Community Conversation on Race & Racism

Who: Noah Kreger, a 2017 Litchfield High School graduate, will guide the conversation.

Why: Let's Talk is a free discussion-based course where participants can speak on aspects of race and racism. "The goal of Let's Talk is to create an outlet for powerful conversations, expand knowledge, and create a support network for the Litchfield community," according to an even flier. Participants can attend one or both sessions.

To register: Email Kreger at krege018@umn.edu.