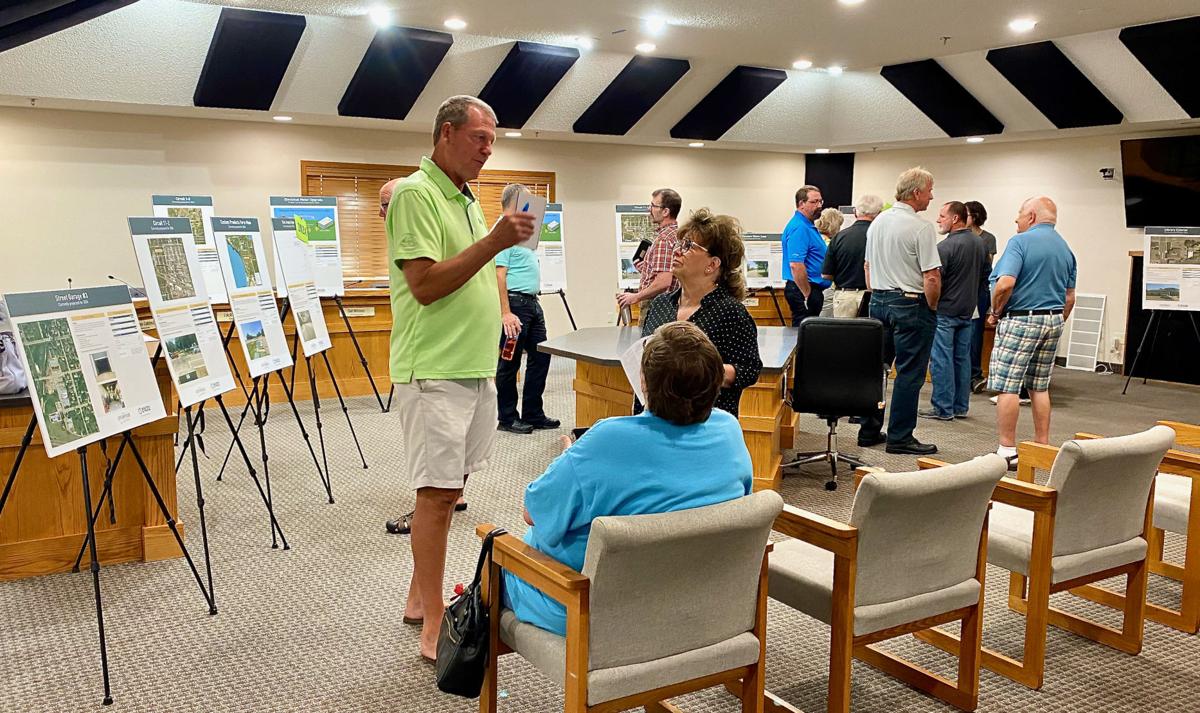 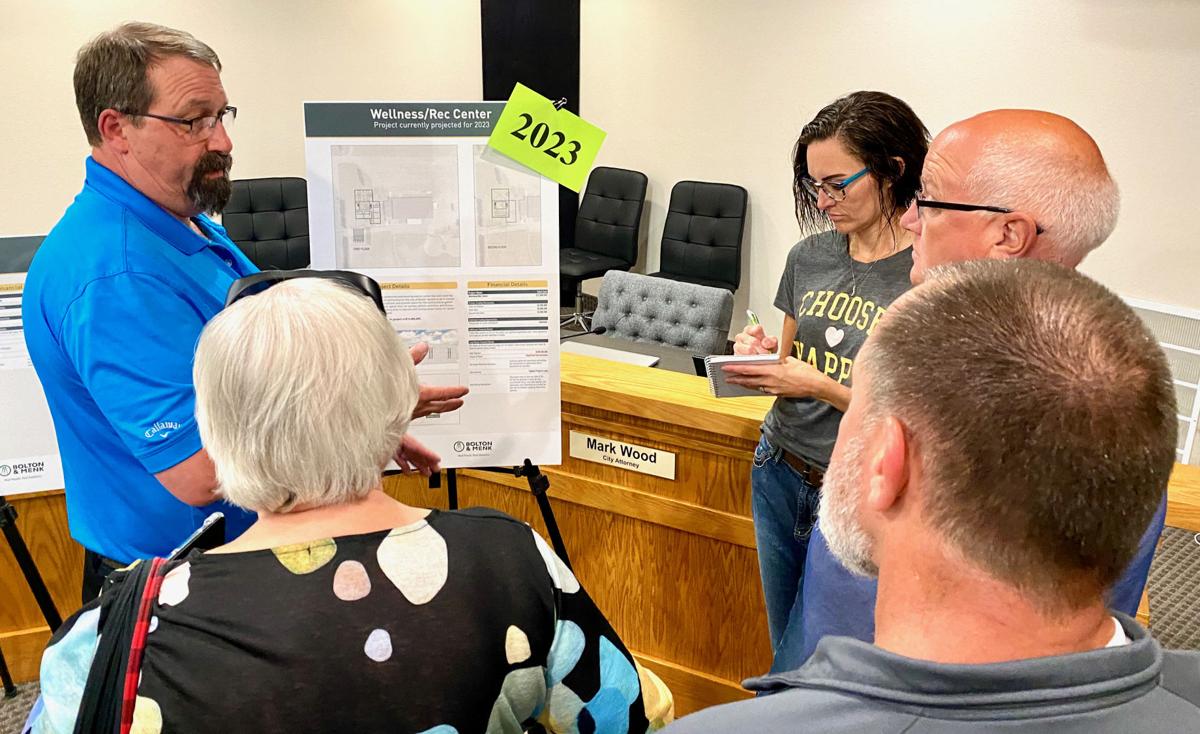 Council member Sarah Miller takes notes as she listens to resident Jim Ellingson talk with others about the proposed wellness/recreation center. 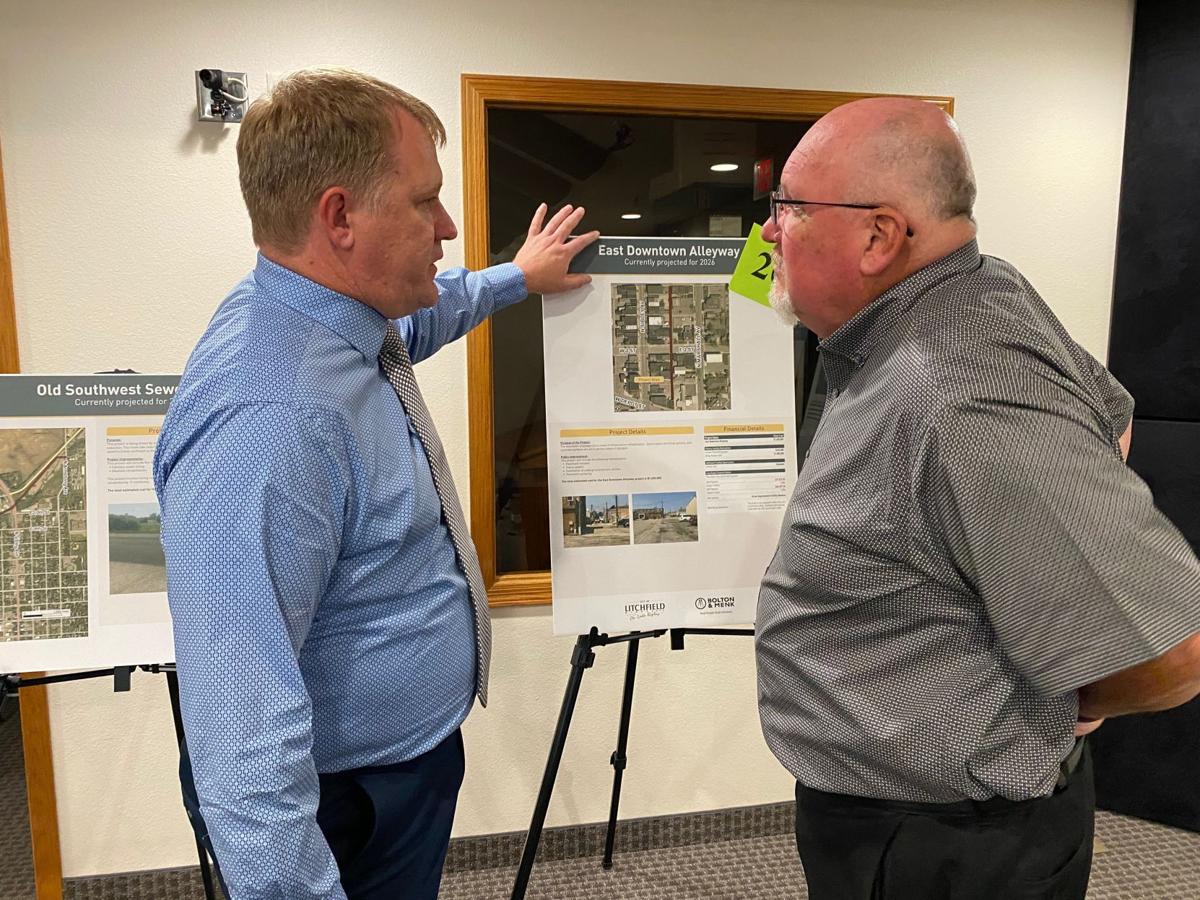 City Administrator Dave Cziok explains details on one of the 30 projects on the city's capital plan.

Council member Sarah Miller takes notes as she listens to resident Jim Ellingson talk with others about the proposed wellness/recreation center.

City Administrator Dave Cziok explains details on one of the 30 projects on the city's capital plan.

Litchfield residents had an opportunity to look into the future last week, at least as it pertains to the city’s plans for investing in infrastructure and amenities.

In what some called a first-of-its-kind open house, residents were invited to review 33 projects that have been placed on the city’s Capital Improvement Plan calendar. The July 26 event allowed anyone interested about 45 minutes to check out project poster boards placed throughout the City Council chambers and in the City Hall entrance.

City Council members mingled with those who attended, listening to comments and questions. That was followed by a brief presentation from City Administrator Dave Cziok and City Engineer Chuck DeWolf, and then an open forum for residents to speak about the plans.

“There are 30 projects that are out here in front of you,” Cziok said. “It’s a pretty big (list) compared to what we’ve looked at previously with our capital improvement plans.”

All told, the plan includes 33 projects carrying a price tag of about $43 million. The plan includes some projects slated to be undertaken this year, including a $3.5 million digester project at the city’s wastewater plant, as well as a canopy for Optimist Park, rehabilitation of tennis courts and creation of a dog park.

Financing the various projects would be done through a combination of tax increases and utility rate increases, Cziok explained. Each of the project boards included the method of funding for the individual project.

“Whether we show it as taxes on a sheet and it turns into rates later on is kind of inconsequential, because we need that revenue somehow, some way from our citizens in order to fund the debt associated with these projects,” Cziok said. “So if you haven’t had a chance to take a look, I would take at look at that.”

Other funding mechanisms could be considered, too, Cziok said, including other rates increases or additions.

“One of the things we could do … is take a look at a stormwater utility that a lot of other communities have that we don’t,” Cziok added. “Right now, again, to me, it’s a chicken-and-the-egg thing. It’s still, we need to collect that revenue from our residents in some shape or form.”

Cziok said after discussing the Capital Improvement Plan with the City Council, he reviewed the city’s utility rates, comparing to other communities with similar situations to Litchfield. That review, he said, showed Litchfield’s rates are “extremely competitive.”

“In our own vacuum it feels like these utilities are expensive,” Cziok said. “Right now, again, with the cities that we traditionally use to compare ourselves (to), we are third from the bottom of that list, and doing quite well, to be honest with you.”

Even forecasting electric, water and sewer rates out three years, he said, the city’s rates will be in about the same spot in the ranking among its municipal peers, raising the average resident’s bill by about $11 over that period.

“So I think you can see it’s still affordable, anyway, to live in our community,” Cziok added.

All that said, Cziok reminded those at the open house that the purpose of the gathering was to gain feedback from residents.

“What tonight is about for us — the Council, staff — we want to find out what the community’s appetite for accomplishing these projects is,” he said. “And we want to hear your feedback, particularly on the grand scale of things, how aggressive we are or aren’t.”

As the meeting opened to public comments, several residents and other public officials strode to the microphone to express their opinions.

Jeanie Shoultz Doran, a long-time Litchfield resident, handed out a one-page letter to city staff and City Council members, then encouraged them to pay attention to needs of seniors.

“I think this town meeting is a really good resource, and I hope we have another one where we can explore some more ideas about seniors and what they need,” Doran said.

She was among many residents who also supported a wellness/recreation center, but with a focus on space for senior activities.

Litchfield School Board chairman Darrin Anderson and Superintendent Beckie Simenson also spoke in favor of a cooperative effort between the city and school district to make a wellness/recreation center a reality.

“I just want to compliment Mr. Cziok and Mr. DeWolf, as well as the whole Council, for having this kind of meeting,” Simenson said. “You know, I’ve been pulling up records from 2003 about the wellness/rec center, and the timing is right, we’re all working together.”

Another resident spoke about the water and sewer plant projects being critical needs for city residents. Additionally, she questioned electric and water meter upgrades that would cost the city a total of $2 million, while potentially eliminating a staff position. Finally, she also asked about a parking lot project at Litchfield Golf Club and whether some of the costs might be covered by Golf Club Inc., rather than the city.

Norann Dillon, who described herself as a resident of the city for less than a year, thanked the City Council for its work in putting together the Capital Improvement Plan. She also encouraged the city to look at state legacy amendment funds as potential sources of funding for the larger water projects in the plan.

“We always are looking for grant opportunities,” DeWolf responded. “Several (past projects) have gone through what’s called the Public Facilities Authority when it relates to water and wastewater.”

Resident Bill Hicks asked about upgrades at Jaycee Park on Lake Ripley, as well as the former tent camping area near the park.

“With the amount of use our lake gets, I would think that we (could) get another couple of families a weekend to spend money in this town if they could tent camp, with (other) campgrounds being full all the time and whatnot.”

As comments came to an end, Mayor Keith Johnson thanked people for attending and encouraged them to share the word on the CIP.

“As you walk in the community, talk to other people … and encourage them to know that the city is looking forward to keeping our city strong. And if we’ve got somebody out there that’s got strong feelings about anything, one way or the other, to get to us. It means a lot.”