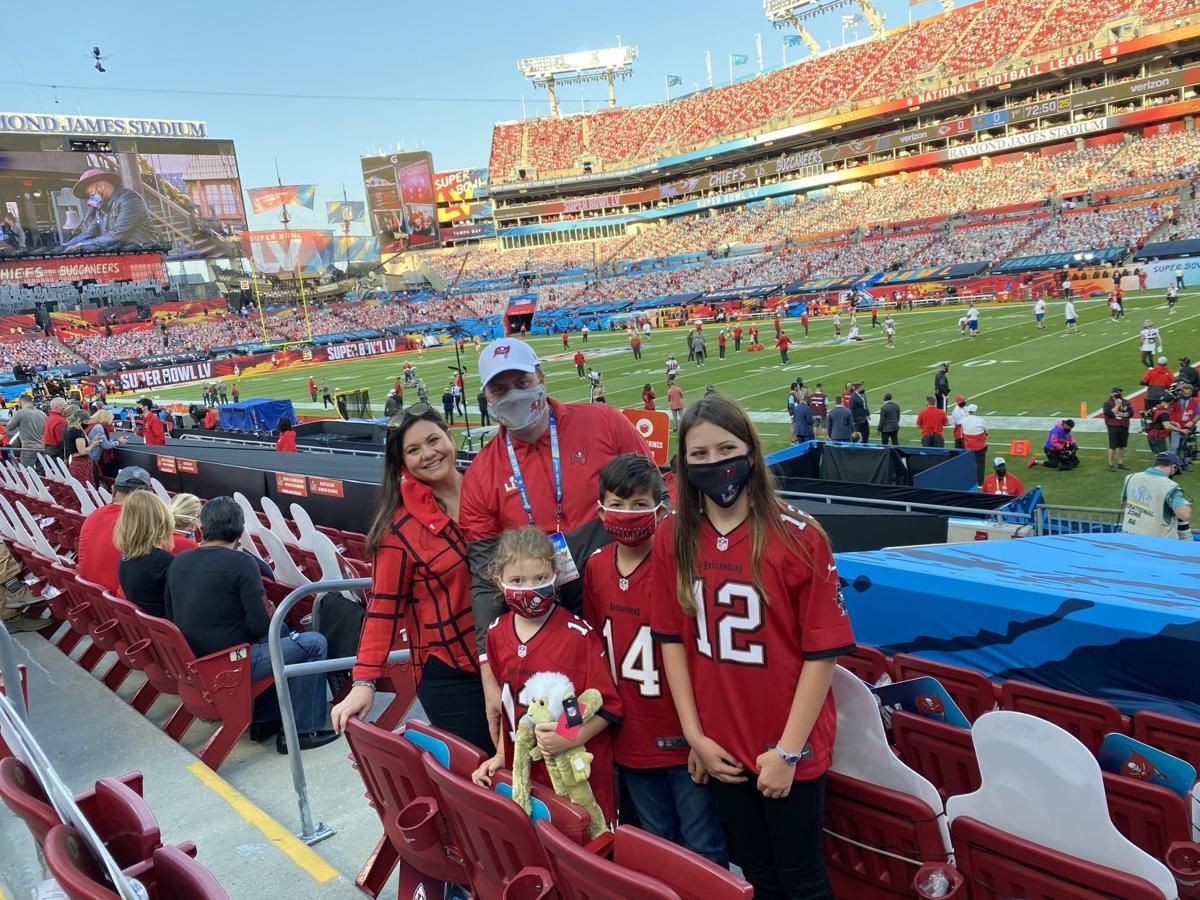 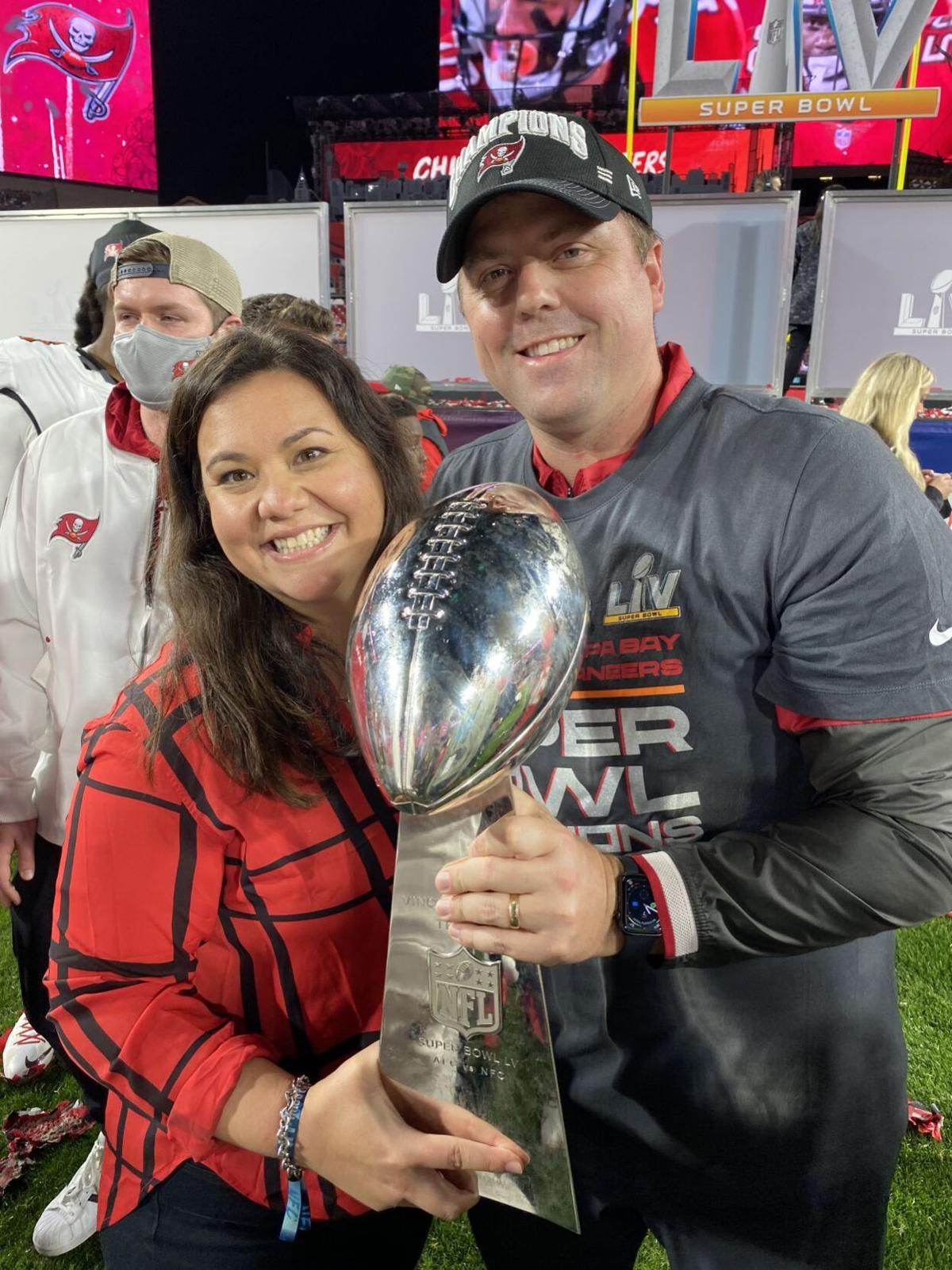 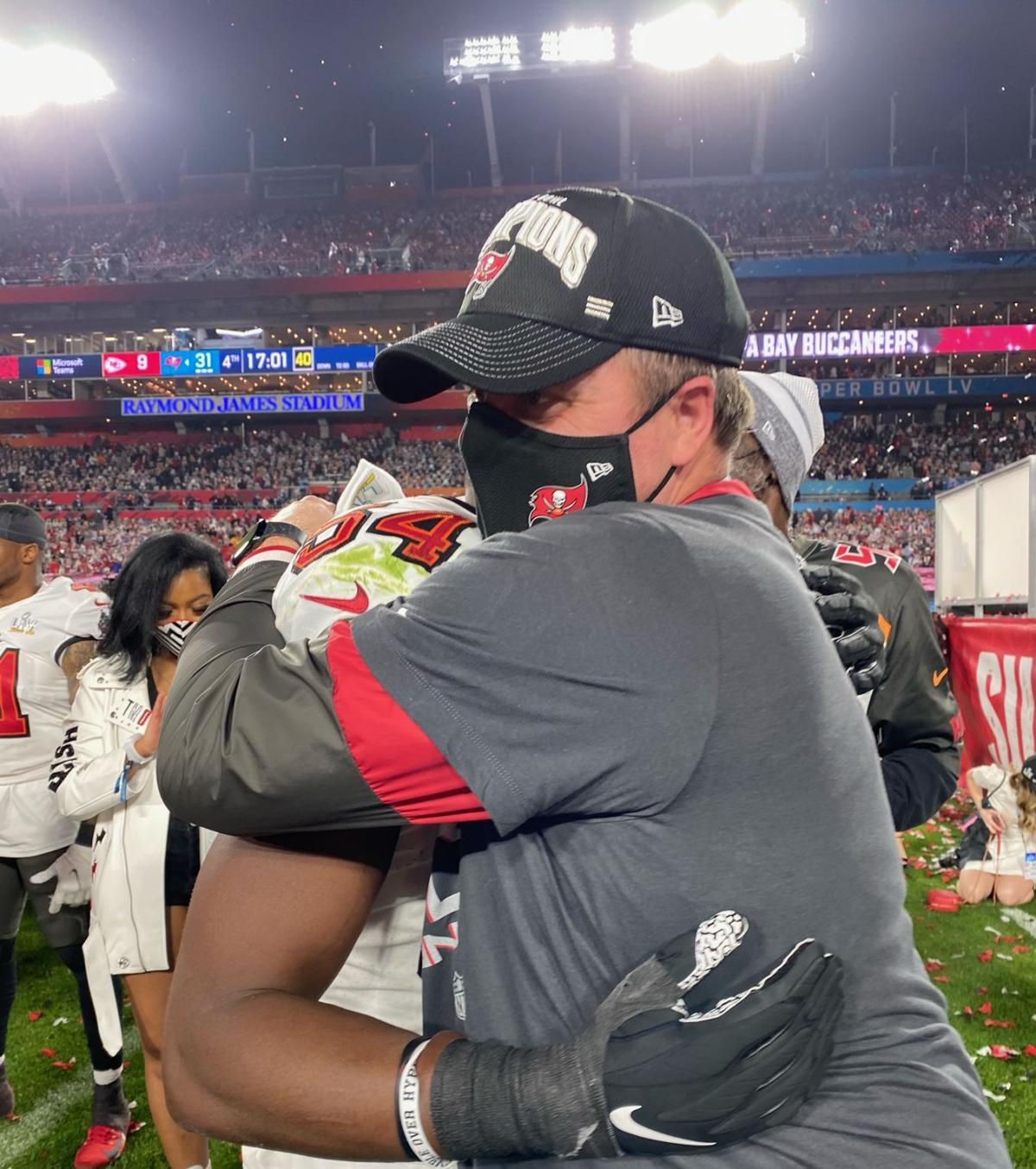 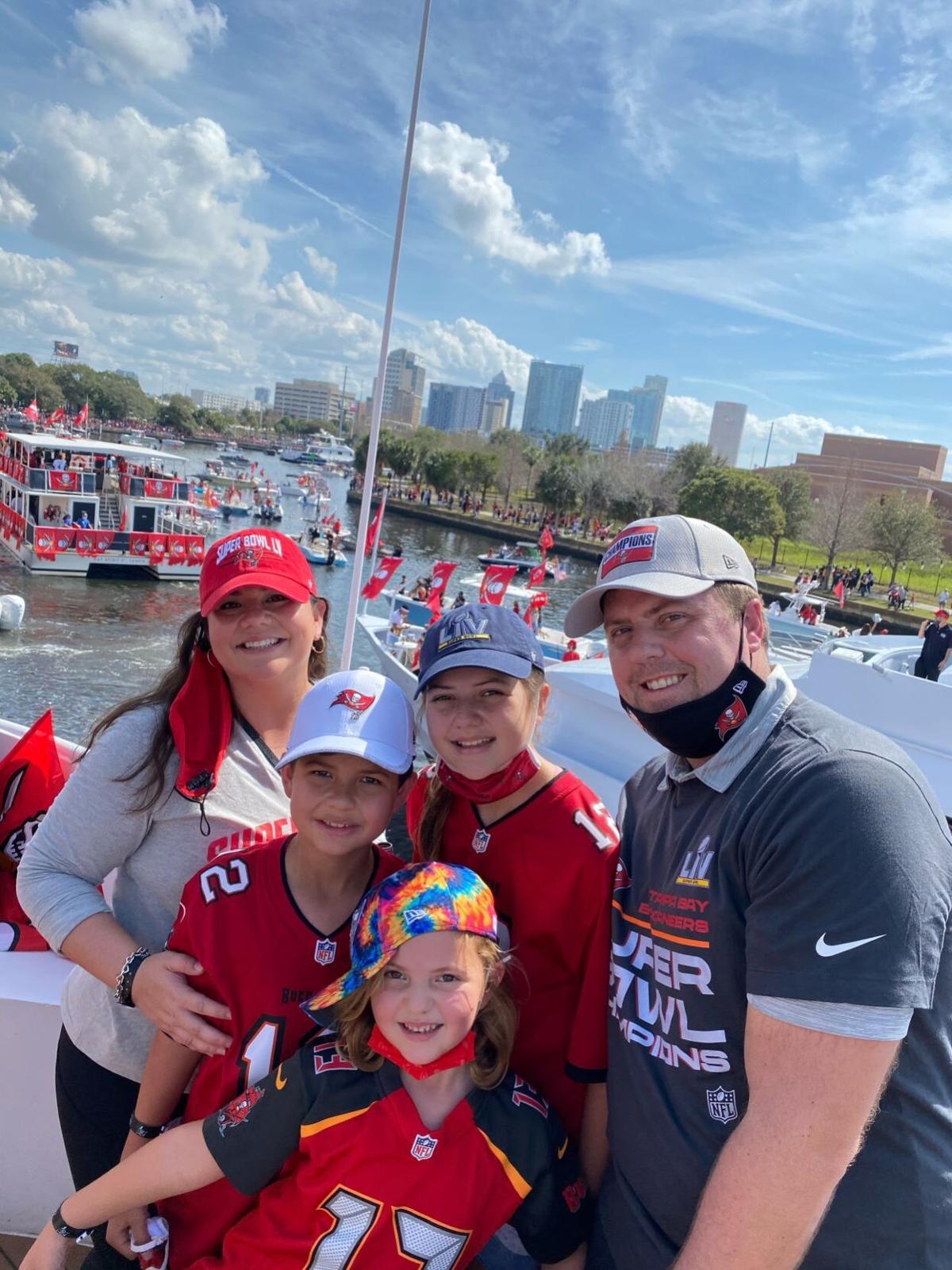 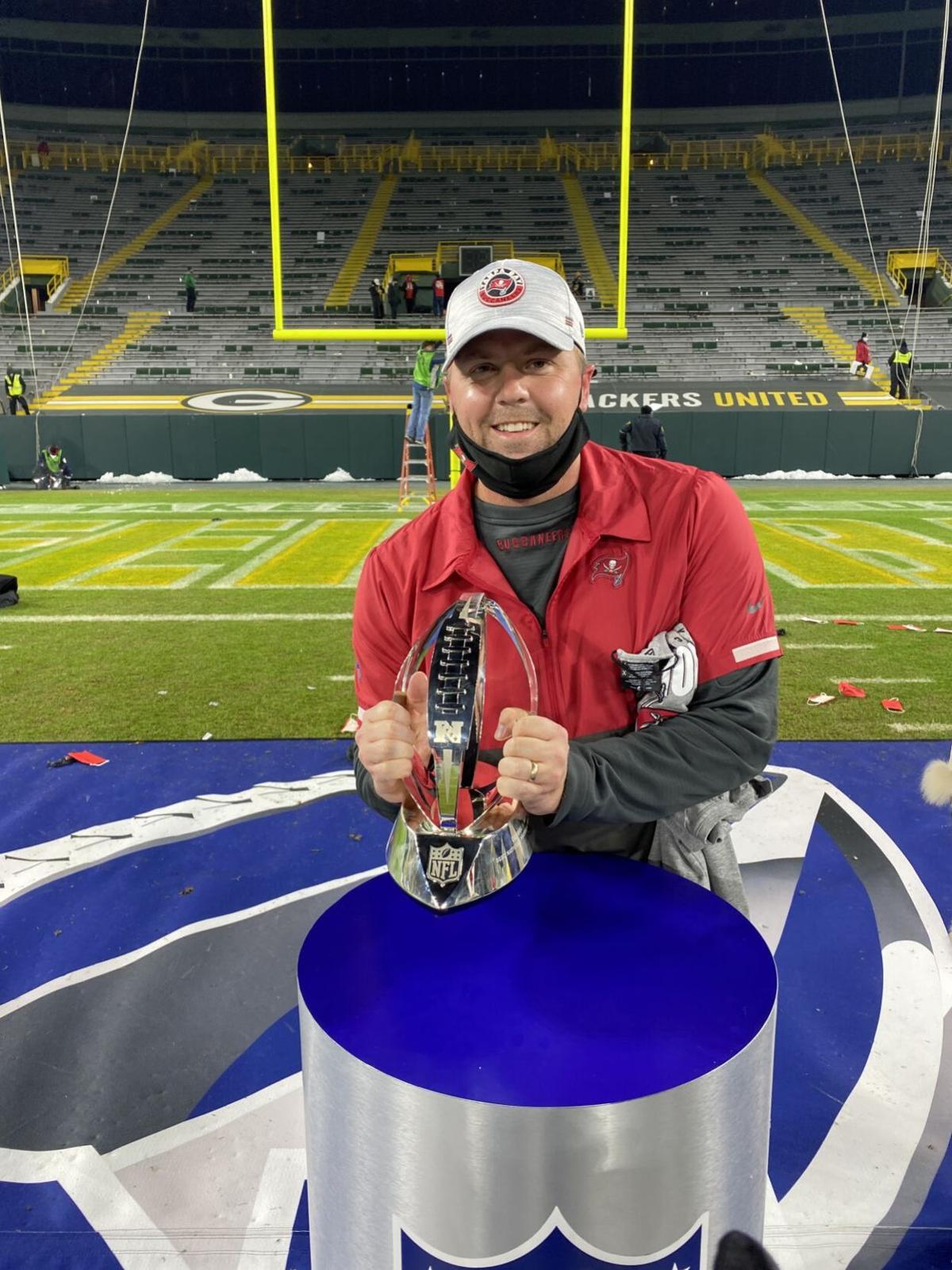 Spencer Dille holds the NFC Championship trophy after the Buccaneers’ win over the Green Bay Packers at Lambeau Field. After growing up a Vikings fan, Dille said beating the old rival — even as a member different team — felt pretty good. 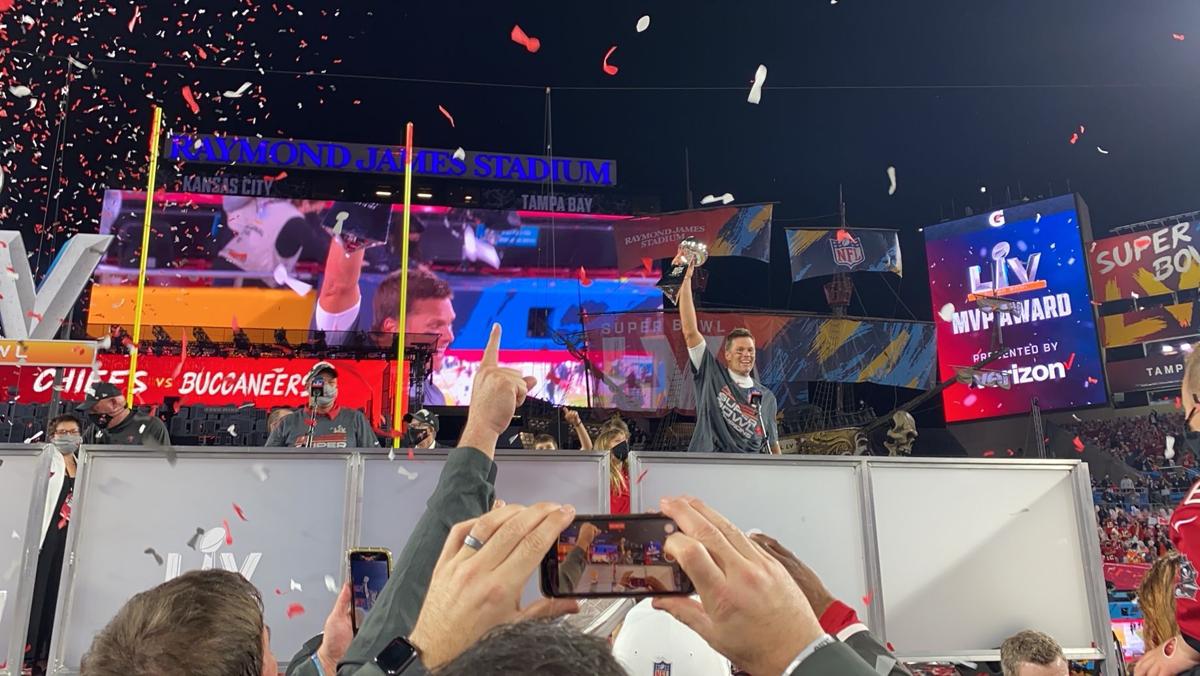 Spencer Dille holds the NFC Championship trophy after the Buccaneers’ win over the Green Bay Packers at Lambeau Field. After growing up a Vikings fan, Dille said beating the old rival — even as a member different team — felt pretty good.

Like almost every kid who grows up playing football, Spencer Dille dreamed of one day winning the Super Bowl.

A two-way starter on the offensive and defensive line for the Litchfield High School football team back in the late ‘90s, Dille’s dream of holding the Lombardi Trophy came true Feb. 7 as he stood on the field at Raymond James Stadium, celebrating with the rest of the champion Tampa Bay Buccaneers organization following their 31-9 win over the Kansas City Chiefs in Super Bowl LV.

“The moment was very surreal,” Dille said in a telephone conversation late last week. “I don’t know how else to say it. The whole week has been … well, it still hasn’t set in. You wake up thinking, did we really just do that?”

Indeed, the Buccaneers did, claiming the franchise’s second Super Bowl title and becoming the first NFL team to win the championship on their home field.

And Dille had a big part in it.

Instead of slamming into 300-pound linemen to try to keep them from getting to the quarterback, or trying to tackle 250-pound running backs, however, the 40-year-old Dille’s role was much more behind-the-scenes.

But in many ways, no less important to the team’s success.

As director of football technology for the Buccaneers, Dille was in the coaches’ booth during the big game, capturing and transmitting overhead photographs from every play back down to coaching staff and players on the field, allowing them to analyze and make real-time adjustments to game plans.

That game-day duty, though, is a very small part of Dille’s duties, which have grown in significance in his nine years with the Tampa Bay organization.

Dille’s journey to an NFL championship was a little different than his boyhood dreams.

The son of Pam and the late Steve Dille, he grew up on the family farm in eastern Meeker County and attended Litchfield Public Schools. He was a three-sport athlete, playing football, basketball and track, while also participating in FFA in high school. In addition to being a starter on the offensive and defensive line in football during his junior and senior seasons, Dille was a member of the Dragons’ basketball team that just missed a state tournament appearance when they lost to Monticello in the section championship game in 1999. Though, he humbly admits, his actual playing time was limited.

Upon high school graduation, he headed to the University of Minnesota where he pursued a degree in computer engineering, receiving his bachelor’s degree in 2003. His grandfather, Robert Johnson, then encouraged him to put his skills to work at COMANCO Environmental Corp., a Florida-based construction firm co-founded by his grandfather, and he did, managing and developing their software platform over the next eight years. He left that position to join Kobie Marketing, where he helped develop a loyalty management software platform for credit card companies.

In 2012, he heard the Buccaneers’ director of football technology position might be opening up, and he applied.

“I was happy where I was at, but I couldn’t pass up the chance,” Dille said, adding that he wasn’t sure he had much of a chance of landing the job, as he expected hundreds would apply.

Turns out, he was one of three people interviewed for the position, and he was offered the job. He happily accepted because of the professional opportunity, but also because it was close to his home in Lithia, Florida, about 20 miles from Tampa, where he and his wife, Deborah, who will celebrate their 14th anniversary in March, were starting their family, which now includes Amelia, 12, Erik, 10, and Josephine, 6.

Dille, who also went back to school to earn his master’s degree in computer science, would do the same kind of work he had been doing in his first two positions. But in a very different setting.

He is in charge of developing all of the in-house software for the football side of the operations — all of the scouting applications, draft applications, i-Pad apps used on draft day and so on. This past season, those duties expanded to include the contact-tracing software necessary as part of the NFL’s COVID-19 protocols.

Dille doesn’t rate player talent, but the work he does allows those who do rate the talent — a coaching staff of 25, and a college scouting team of another 20 or so — to collect all of the information in one place. And in case you’re wondering, it’s a lot of information.

The “player acquisition” analysis includes the basics like height, weight and speed in the 40-yard dash, but it expands to include everything from who a player’s friends are, to what his family is like, and how well they learn.

“Everything about them,” Dille said. “It is a lot of information. A lot of them have no idea how much information we have on them when they’re drafted.”

It’s all part of a business to make sure a multimillion contract is offered to the right kind of talent.

“My job is to make sure what (scouts and coaches) put in to the system is gonna be accurately displayed to themselves and the higher-ups,” Dille said.

That work has been done under four different head coaches and two general managers in Dille’s nine seasons with the Buccaneers.

His relationship with the current general manager Jason Licht grew even closer last spring when the pandemic descended and threw the NFL’s annual draft into disarray. Normally a large event, with representatives of teams in one location for a made-for-TV talent festival, and the coaching staff and front office folks for every team gathered in their talent “war rooms,” last year’s draft was different.

The Bucs’ Licht monitored the draft from his home, where — due to COVID-19 protocols — he was allowed one other member of the team’s front office. That person was Dille, because the technology of talent acquisition needed to work.

“I was just trying to make sure everything went smoothly for him,” Dille said, admitting that it was pressure-packed. “I was trying to go through every scenario, it was nerve-racking. I was sitting there thinking, ‘This is probably the biggest night of my professional career.’ Of course, I didn’t know it would be trumped this year by the Super Bowl.”

In addition to his technology duties, Dille found himself wearing many hats. He took publicity photos, he shot video of Licht talking with coaches and other staff, he informed the social media team what was happening.

“A lot of people needed me to fill in for them, because each team was allowed to have one tech person (with the general manager),” Dille said. “It was a very busy night.”

“I had some friends joking with me that I was pulling the strings l.. of course I wasn’t,” Dille said with laugh. “It was pretty cool though.”

Two of the first four draft picks — Wirfs and Winfield — became starters for the Bucs, while Johnson, drafted in the fifth round, contributed more as the season went on.

For Dille, it was fun to see the Buccaneers develop. He said that after Week 12, “everything just started exploding. It’s hard to describe, but it felt like we were the team this year.”

Traveling with the team to the NFC Championship Game at Lambeau Field in Green Bay was a special treat, he said.

“I grew up a Vikings fan, obviously … being able to go into Lambeau Field and beat the Packers was obviously the best win of my life,” he said. “Well, until two weeks later.”

Manning his station in the coaches’ booth at the Super Bowl, Dille said, he tried to be all business. He knew he needed to do his job. But as the game went on, the fan in him came out.

“I was trying to do my best to do my job, but it definitely creeps into your mind,” Dille said. “We were kind of expecting a Chiefs comeback … and it just never came.

“And then the thought creeps into your mind, like ‘Oh my gosh, we’re going to win the Super Bowl,’” he said. “It was pretty crazy.”

With the game decided early, Dille and the rest of the coaches made their way to the field in time to be part of the raucous celebration as the final seconds ticked off the clock.

As he walked with his wife on the field, celebratory confetti filling the air, Dille’s phone blew up with “close to 100” congratulatory texts.

“It was just so fun,” he said. “it’s very surreal. You can’t believe it’s happening. Everyone congratulating each other … seeing the commissioner up there. The whole thing. It was pretty cool.”