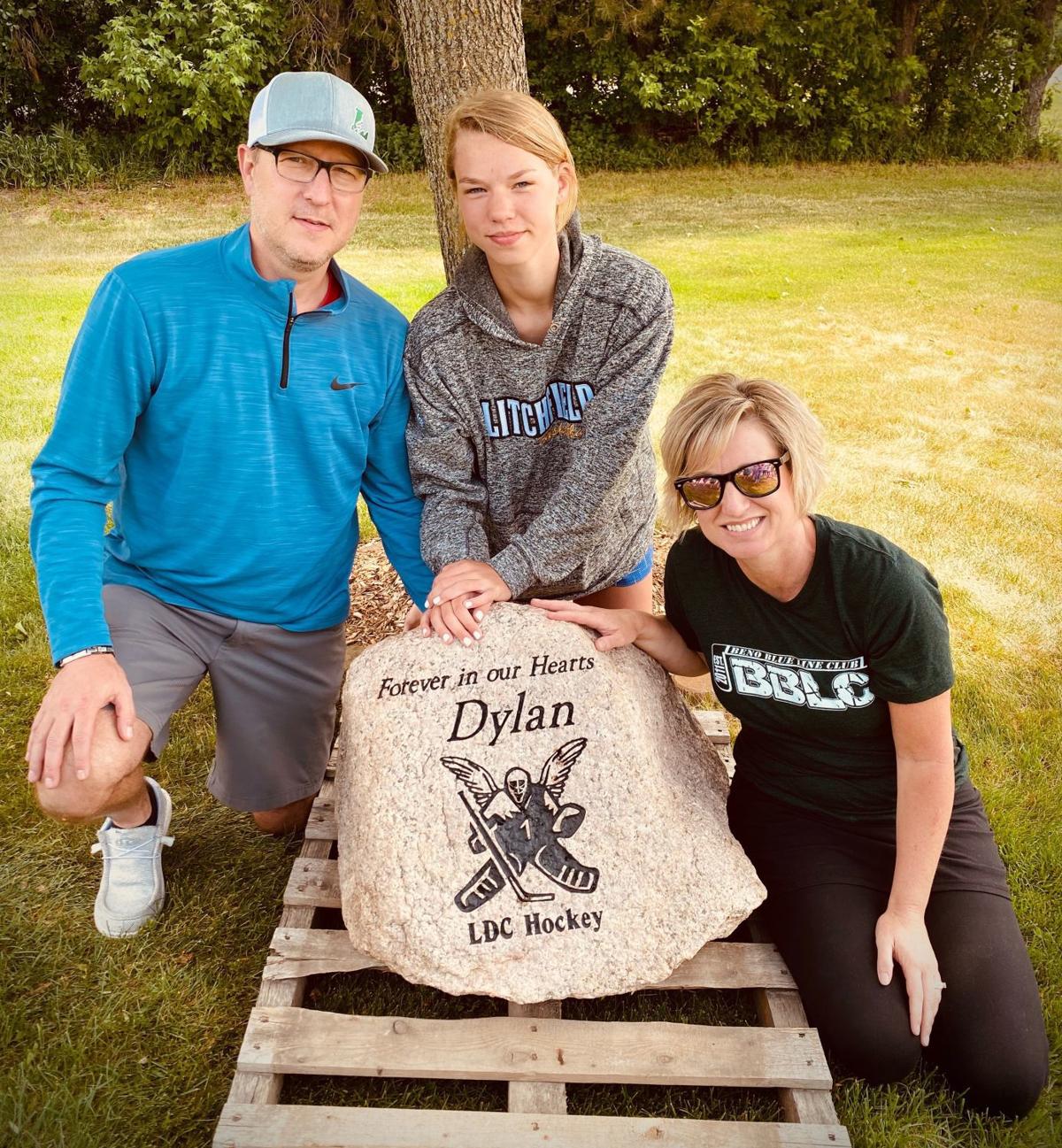 The Falling family — Dustin, Morgan and Michelle — received a memorial stone from Litchfield/Dassel-Cokato hockey families following the death of Dylan Falling in a June car crash. 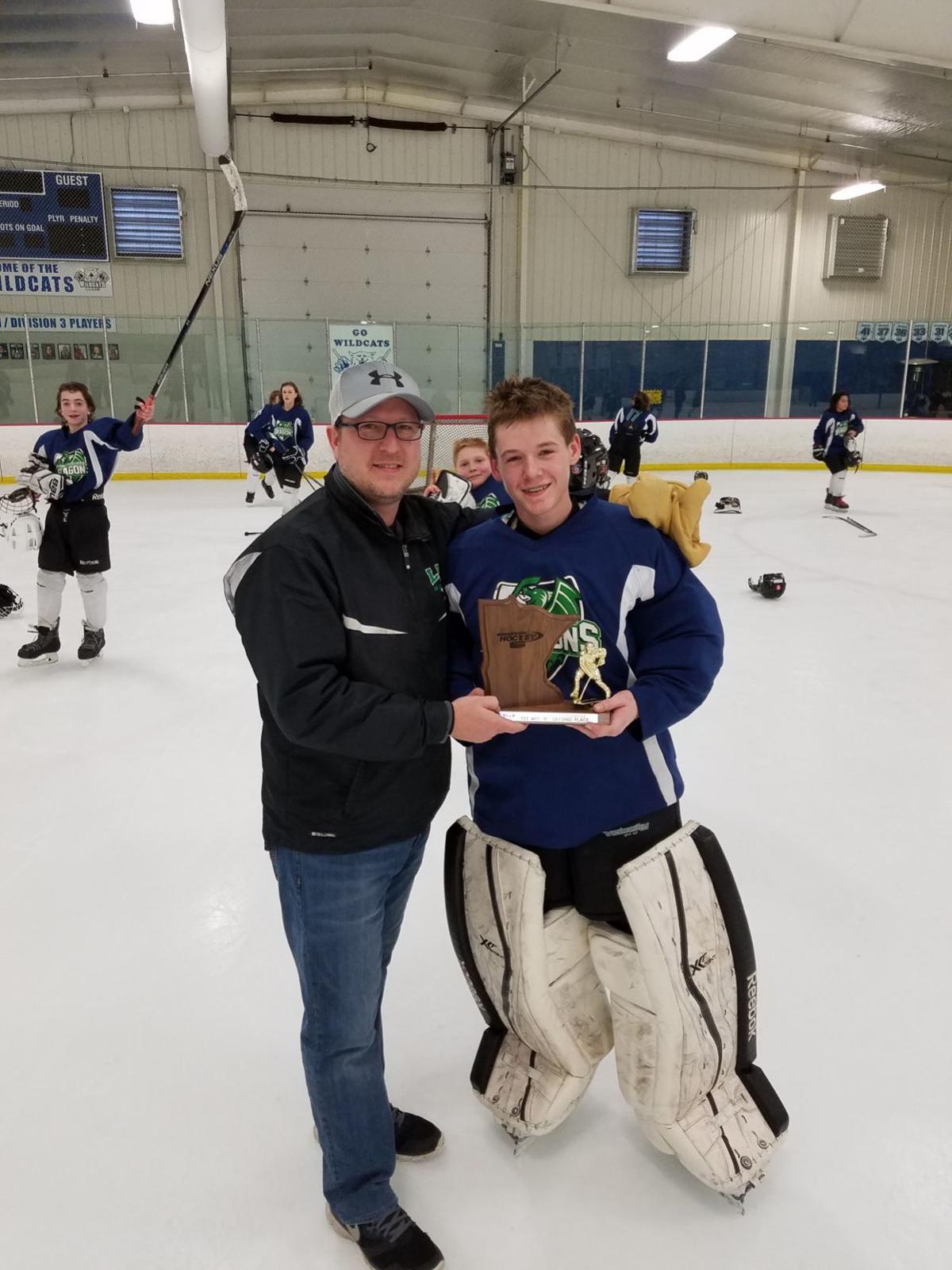 Dustin and Dylan Falling shared a common love for hockey, both playing goalie in the Litchfield/Dassel-Cokato system. In one of Dustin’s proudest moments, they celebrated together on the ice when the LDC PeeWee A hockey team qualified for the state tournament, a season in which Dylan started every game in goal. 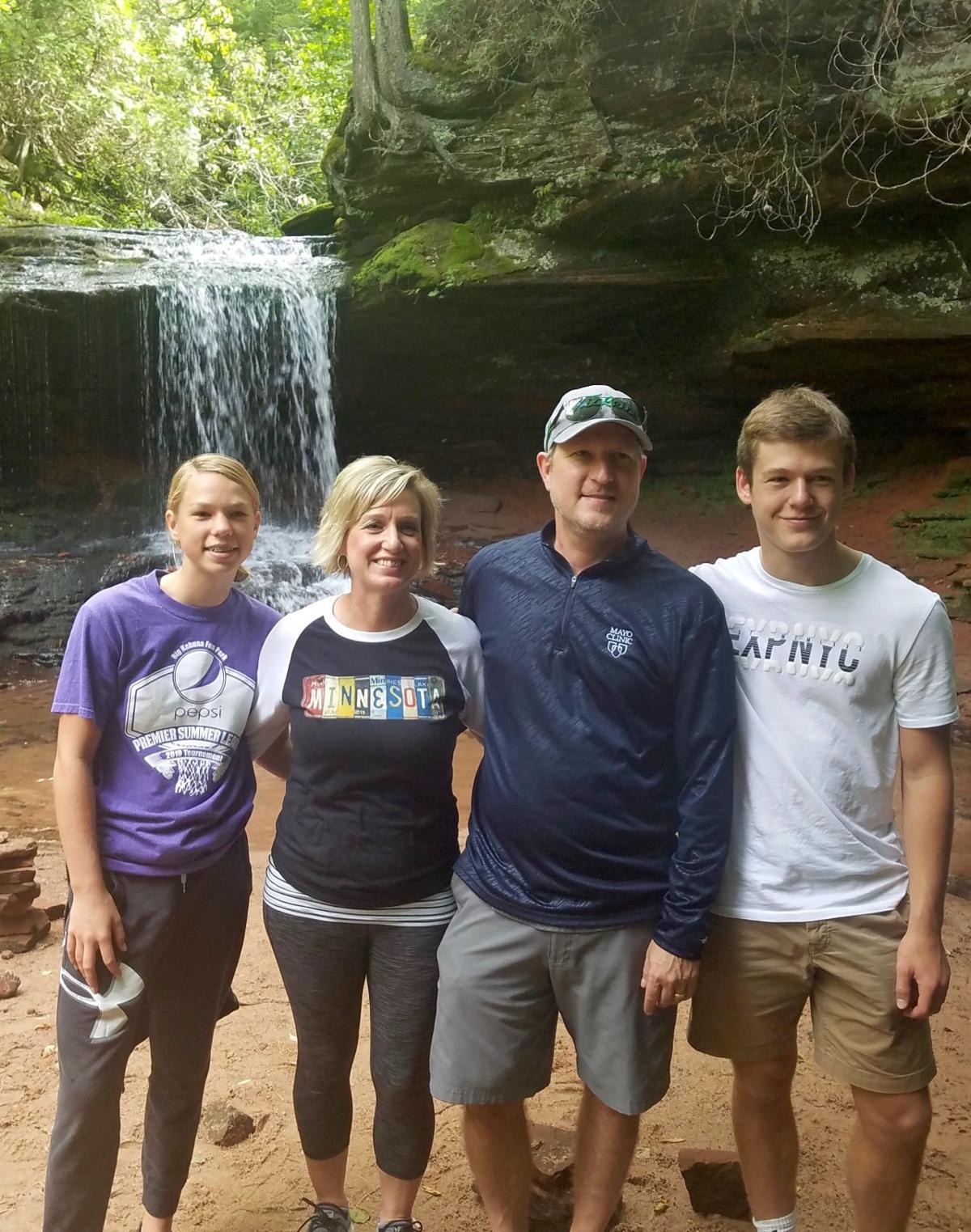 The Falling family — daughter Morgan, Michelle and Dustin, and son Dylan — posed for a photo last year while on a hike near Bayfield, Wisconsin. 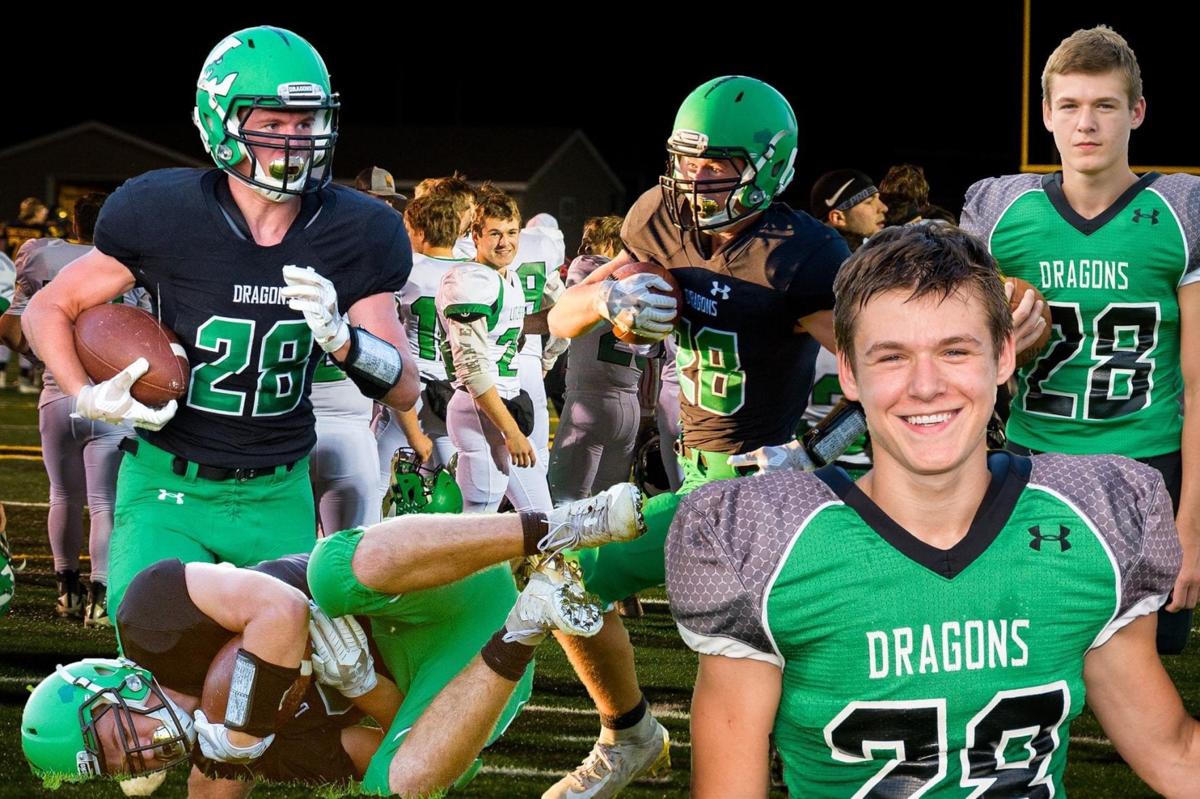 Dylan Falling played running back for the Litchfield High School football team. Some of his on-field exploits were memorialized in a photo montage by local photographer Dan Gelle. 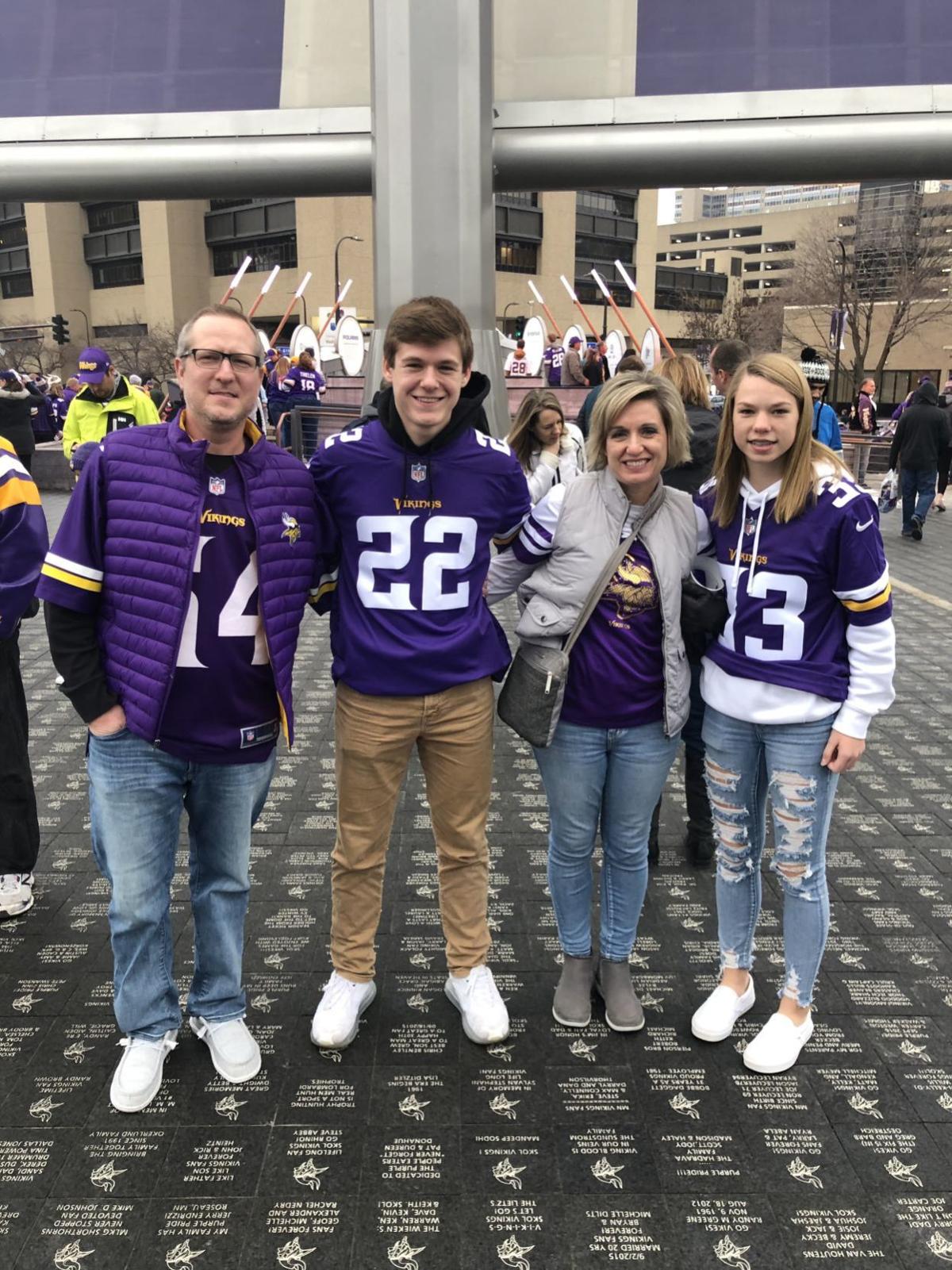 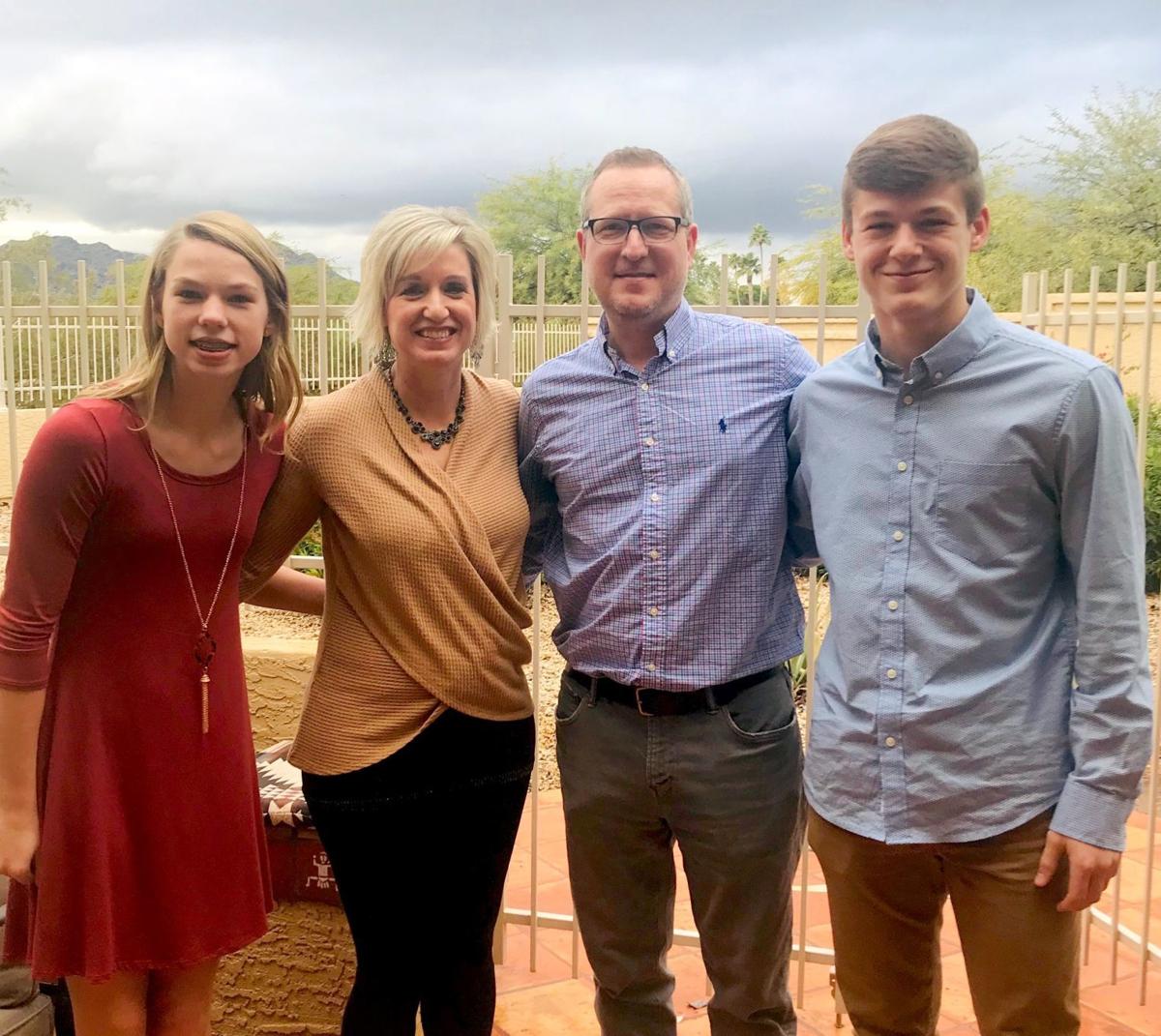 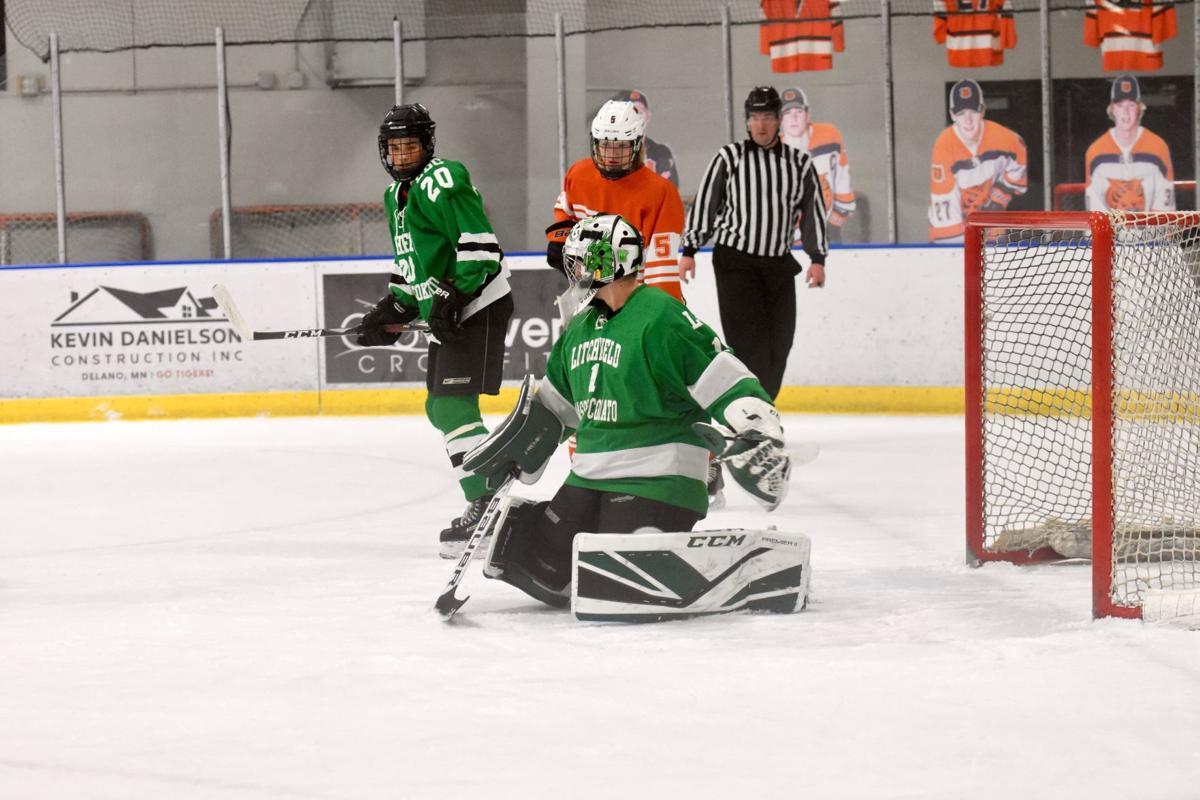 Dylan Falling played running back for the Litchfield High School football team. Some of his on-field exploits were memorialized in a photo montage by local photographer Dan Gelle.

Dustin Falling has taken pride in passing along life lessons to his children. Among the most important was the significance of being an organ donor.

“I always said, ‘the Fallings are a donor family,” Dustin explained recently during a nearly two-hour conversation that was filled with a mixture of both tears and laughter at a Litchfield restaurant. “I asked (my son) Dylan when he was getting his permit if he was going to be a donor, because I feel strongly about it, but I told him it’s ultimately up to him.

“I’ll never forget when he filled out the application at the licensing department. They said, ‘Are you going to be a donor?’ In a loud voice, he said ‘yes,’ then looked at me and smiled. He was proud of it, and that was really cool.”

Little did Falling realize that the importance of organ donation would soon strike his family under the dark cloud of unthinkable tragedy.

The night of Friday, June 5, was nothing out of the ordinary for Dustin and Michelle Falling. Their children, Dylan and Morgan, were out with friends. That led to a quiet dinner on their patio for the couple, who started dating at Litchfield High School before eventually getting married in 1998.

After dinner, Dustin checked the Facebook app on his cellphone, a routine occurrence for the owner of LifeStyle Homes in Litchfield. He saw a post from a friend mentioning a major car crash near Turck’s Trees on State Highway 24 that involved a heavy ambulance presence along with a helicopter.

Dustin knew 16-year-old Dylan, was on his way to pick up his best friend, Danny “Winky” Estrada, who lives in the Forest City area, for a trip to St. Cloud.

Dustin uses a “Live 360” app on his phone to track the location of his children, for safety purposes. Dylan’s location wasn’t moving.

“I told Michelle, ‘let’s not jump to conclusions yet because maybe they’re waiting for the accident to clear,’” Dustin said.

“Becky said he always answers her calls, so then we started freaking out,” Dustin said. “We hopped in the truck and hauling (butt) toward to scene.”

A few miles from the scene, Dustin received a call from one of Dylan’s friends. He was crying and said he heard from someone who had driven past the accident that there was a silver Chevy Cruze in the ditch – a match for Dylan’s car.

“When we got on site, the helicopter was in the middle of the road and Dylan was already in it,” Dustin said. “Winky was on a stretcher. I was able to talk to him and made sure he was OK. Dave Lecher, my service guy, was on scene with the Rescue Squad. He said, ‘I’m not a doctor, but he looked really good.’

“He had a little blood from his ear and he was moaning, but he wasn’t responsive. On the outside, we didn’t see a scratch on him. But, I didn’t have a good feeling. That’s the way I am. If he pulled through, I would’ve said I honesty didn’t think he would’ve made it. When they go in a helicopter, I just knew it wasn’t good.”

On Sunday, with the help of a compassionate nursing staff, they finagled a way to get Morgan, 14, into the room to see her brother. The family talked to Dylan, held his hand and told stories. He didn’t respond, but everyone believes Dylan heard them.

“In those couple days, I spent I don’t know how many hours Facetiming friends and family to see and talk to him because they couldn’t get to see him,” Dustin said. “So everybody who I could remember reached out to me got to tell stories to him.”

The doctor told Dustin and Michelle that it takes 48 to 72 hours to determine the severity of brain damage, but Dustin couldn’t get rid of the feeling that his son was likely not going to recover.

“You’d get some encouraging words from family members saying ‘they’re young and strong and they can pull through this,’ but in the back of my mind I just didn’t know,’” Dustin said.

There was a moment of optimism when a nurse administered a test to determine consciousness, and Dylan’s hand moved slightly and one of his arms twitched.

“I had this ounce of hope. I didn’t want to think too far ahead and get hopes up,” Dustin said. “We went to lunch and when we came back they said that wasn’t a response to anything and his brain was posturing, which means it’s basically shutting down and his body was just reacting to that.

“We kind of knew at that point. On Sunday, they said they needed to talk to us and told us he’s brain dead. Morgan came in and we told her. I asked over and over again if there was any percent chance he could come through, and they said zero. Morgan couldn’t accept that. She kept saying, ‘go ask again.’”

Michelle had recently mentioned how well things were going with the family and that Dylan and Morgan were getting along wonderfully. Dylan would drive her around town and they would hang out in each other’s rooms.

“He had turned a corner from being a kid into a young man who was really good,” Dustin said.

When the reality hit that Dylan wasn’t coming back, it was Morgan who pulled the family together.

“Amazingly enough, Morgan, for a 14-year-old, was amazing,” Dustin said. “She said ‘we need to do better as a family.’ She told us we are great parents and they don’t give us enough credit. She really spearheaded how we were moving forward. It was truly amazing.”

Dylan’s drive-in visitation on Tuesday, June 16, was attended by hundreds of friends and family at St. Philip’s Catholic Church in Litchfield. His remains were put to rest a day later after a private funeral that was streamed online for thousands to view.

Lifesource is a company that specializes in finding recipients for suitable organs. On June 25, the Fallings received a letter from the company stating the following:

“Please accept our heartfelt sympathy on the death of your son, Dylan. Our hope is that you can find peace in remembrances of special times together and the warmth of lasting memories. Also, we would like to express our deepest gratitude for your support of Dylan’s decision to help others through donation. His compassion has given others a second chance on the quality of life.”

In addition, his connective tissue, bone, vessels veins and skin will be donated to dozens of recipients.

The organ harvesting also had a personal touch as Tim Langemo, a longtime family friend and Dustin’s hockey teammate for Litchfield/Dassel-Cokato, oversaw the procedure. Langemo is a certified registered nurse anesthetist at Hennepin County Medical Center.

Ironically, Dustin knows firsthand the importance of organ donation. He received a kidney from his brother Kyle in a procedure in February 2019. Dustin says he feels better than ever and has resumed a healthy lifestyle that includes frequent post-dinner bike rides past the St. Philip’s Cemetery to chat with and say goodnight to Dylan.

Foundation in the works

Soon after word spread of the accident, a GoFundMe page “In Honor & Memory of Dylan Falling” was launched and has since raised more than $20,000. Donations are still being accepted on that site, and plans are in motion to form a foundation to honor Dylan’s legacy called “The1Foundation.”

Dylan, like his father, was a goalie for LDC. His jersey number “1” will be retired by the hockey program until he was set to graduate in 2022.

Dustin coached Dylan throughout the youth ranks. Dylan helped lead LDC’s PeeWee team to the state tournament where they lost three one-goal games – a rare feat for the program at the youth level.

The foundation will be set up to raise money for several causes — not just hockey. Some proceeds will go to help young goalies afford summer camps, something Dustin said Glenn and Ethel Young made possible for him as a kid. Additional proceeds are planned for other youth sports, like buying football cleats for families who can’t afford them.

Dustin and Michelle also plan to help food shelves in the Litchfield, Dassel and Cokato communities, along with a scholarship to School of St. Philip, which Dylan attended until moving on to middle school.

In addition, Michelle is helping take the lead on directing funds to help teens who need financial assistance for mental health issues.

“Dylan went through some mental health bumps throughout his life and benefitted from working with the local area mental health services from both Woodland Centers and Pathways Therapeutic in Litchfield, and I know there are so many great kids like Dylan who just need someone else to talk to about how to cope and realize challenges are part of the human experience,” Michelle said.

“There is still a stigma out there related to youth and mental health and maybe we can help more parents who aren't equipped to help their children process what is going on in their minds,” she said. “We know teens don't always listen to or take their parents’ advice and need someone outside to talk to and trust. There are so many opportunities we will have to financially support our community. It's exciting to start dreaming and planning how we will be able to give back to the community to help others and live out our son’s life legacy.'

Daily life is vastly different at home for the Fallings. The cards and well-wishes have been read, and both Dustin and Michelle occupy their time with work, which Dustin said is a welcome distraction. They’ve also had gatherings with Dylan’s friends at family property on Lake Stella.

Dustin said he and Michelle don’t for a second regret allowing Dylan to go to St. Cloud that night, stressing that would be hypocritical since they used to hound him to stop playing Fortnite in his room and encourage him to go out and drive around with friends.

The coping and grieving process is constant. Dylan wrote a speech about a person he admired for one of his classes at Litchfield High School. The speech was about his father. Michelle asked if Dustin wanted to see the speech on Father’s Day, which was four days after the funeral.

Dustin wasn’t ready for that, simply saying this:

“Every milestone will be hard. The thing I’ll miss more than anything is we were starting to hang out more as father-son, and as a friend and not just a father.”