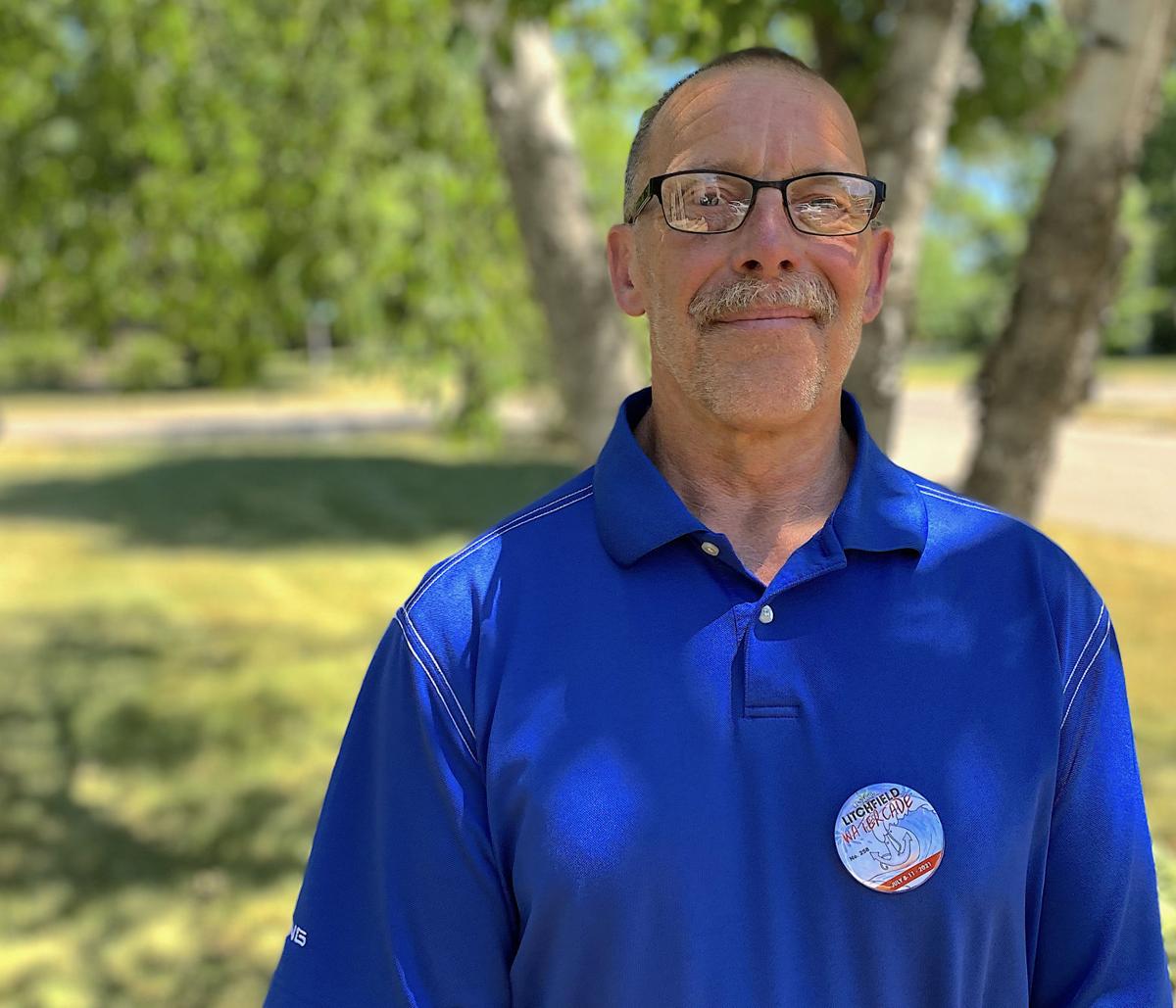 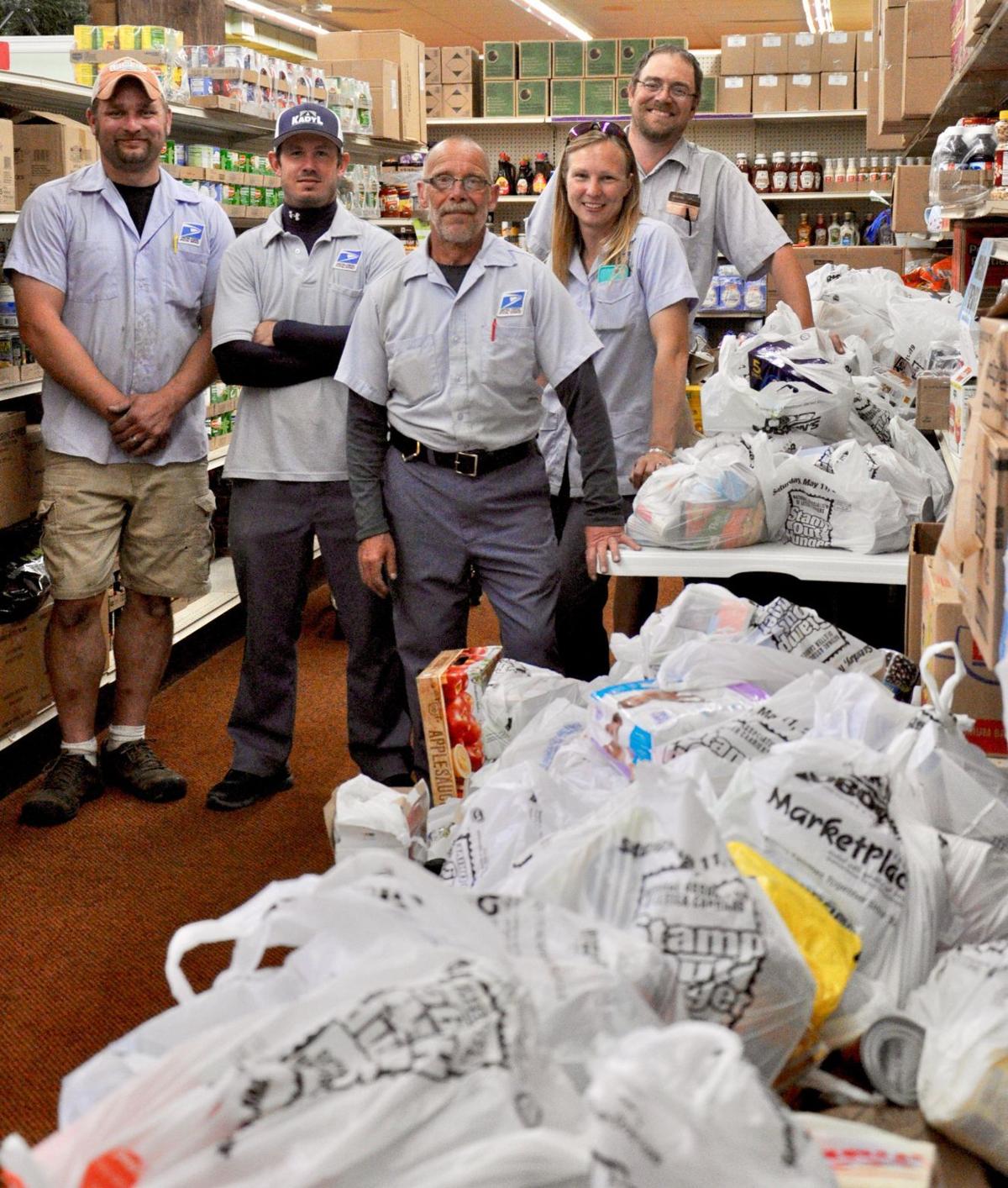 Dean Krug, center, was joined by fellow Litchfield letter carriers Kyle Joramo, Josh Johnson, Becky Magoon and Richard Pennertz as they pose with some of the food they collected during the local group’s stamp Out Hunger food drive in 2019.

Dean Krug, center, was joined by fellow Litchfield letter carriers Kyle Joramo, Josh Johnson, Becky Magoon and Richard Pennertz as they pose with some of the food they collected during the local group’s stamp Out Hunger food drive in 2019.

On an unseasonably warm Sunday afternoon in early June, Dean Krug thrust out his forearms, as if to provide evidence of his physical and mental state.

“I got goosebumps!” Krug said with a smile.

Such is the excitement the lifelong Litchfield resident has experienced since being notified earlier this year that he had been chosen to serve as grand marshal for this year’s Watercade Grande Day Parade.

He admitted he wasn’t quite sure what the duties of a grand marshal were, or what made him qualified to even be considered. But Krug knew it was an honor to be chosen.

Yes, even enough to give him goosebumps.

In fact, Krug said, when he first got the call notifying him that the Watercade Board of Directors wanted him to serve, he thought someone was trying to put one over on him.

Krug even suggested names of a few other people the board could consider instead of him. But the board stuck with him.

“I asked if I could have a day or two to think about it, because it’s a big deal. And for two days, I tried to come up with somebody better than me,” Krug said. “You know, in my mind, I was also thinking that it would be kind of cool. I just hope I can live up to the role of grand marshal in representing the town, I guess. It’s just really an honor.”

Such public recognition is unusual and a bit uncomfortable for Krug, who has spent the past 39 years as a letter carrier for the U.S. Postal Service, whose route takes him to downtown businesses and much of Litchfield’s south side.

It’s the kind of job where everyone knows him — “here comes the mailman” — but few people actually know the real Dean Krug.

For instance, he and his wife, Cindy, a Manannah native, have two adult daughters, Ashley and BrieYanna. He likes sports and he likes to cook — he’s especially fond of apple crisp — and he’s a self-described “oddball collector of things.” He collected baseball cards in his boyhood — not that unusual — but he also collected dice, wheat pennies and keys.

As he got older, Krug became a stamp collector, not that unusual for someone in his line of work. But he held on to his earlier collections too.

“I’ve kind of let the other (collections) go,” he said. “But my daughters say, ‘Dad, why do you have 200 keys in a jar?’ And I tell them I don’t really know, maybe because I didn’t want to throw them away? They tell me, ‘You’re just weird.’ Fair enough.”

Because most people don’t know him beyond his role as a letter carrier, however, Krug says he works hard to maintain a cheerful public persona. Because, well, that’s the way he wants people to remember him, both for himself and his profession.

“Just like everyone else, you have extremely good days and extremely bad days,” he said. “I deal with the public eye, and you can be in the foulest mood in the world, but you better not let them know that, because that’s a perception they have when they see you 10 seconds a day.

“In the end, people along the way make it very, very fun,” he added. “Because even if they come out and talk to you for 10, 15 seconds, a minute, that makes their day, and they’re happy to see the mailman.”

Krug takes his job seriously, but it goes beyond simply dropping letters and packages in mailboxes for him. He also makes a point of observing, especially older residents on his route. Those brief encounters along the route help him know they’re OK. And he notices when one of them hasn’t picked up their mail in a couple of days.

“I worry about them,” he said. “And I have to say, well, I need to find somebody, because this lady needs to be checked out or this gentleman here. You feel kind of responsible for the accuracy of the mail as well as the well-being of your patrons on your route.”

Krug’s job at the post office also helped him see an opportunity to help the larger Litchfield community several years ago, when he led fellow carriers in organizing a local food drive as part of the nationwide Stamp Out Hunger drive by the National Association of Letter Carriers. The annual drive, which takes place the second Saturday in May, asks postal patrons to leave nonperishable items at their mailbox for pickup by letter carriers as they deliver the mail.

The first drive took place about 25 years ago, and it wasn’t exactly a raging success – gathering 30 to 50 pounds of donated items, as Krug recalled. But he and fellow letter carriers kept at it, and the donations steadily increased every year, to near 4,000 pounds in 2019.

Due to pandemic concerns, the food drive didn’t happen the past two years, “which is kind of sad, but it’s kind of the sign of the times. I hope they have it next year.”

He said he was motivated to keep the food drive going by conversations he had with former Meeker Count Food Shelf director Brenda Voigt and current director Jamie Revermann.

“I asked (Voigt) once if this was a good thing, and she almost cried,” Krug said. “She said this is a very, very good thing.

“When Jamie and Brenda would see these (postal) trucks back up with food, they were just amazed,” he added. “It truly was community driven, and all we did was serve a need and the people of this city and the rural people are the ones (who) stepped up. We can have a food drive, but if nobody gives anything, you know, it doesn’t really matter.”

Another project Krug helped instigate at the Litchfield Post Office was perhaps less impactful in terms of community service, but might have had a larger role in increasing the profile of local letter carriers.

Litchfield carriers had their own entry in the Watercade parade for years in which they walked and threw candy to people along the route. Krug jokingly says that he was motivated by competition.

The story goes that Krug and his family attended a parade many years ago when his daughters were toddlers. One of the parade units was a UPS truck, throwing candy, which his daughters eagerly chased down.

“I says to the girls, ‘Throw the candy back. Throw it back. We don’t want that,’” Krug said with a smile. “Then I started thinking, ‘You know what, if we would do that, it would be a pretty good deal for the Watercade parade.’”

The idea quickly became reality as letter carriers agreed to use the profit from an employee pop machine to buy candy for carriers to throw. It was a tradition that lasted for about 15 years, Krug said, but stopped several years ago.

But this year, Krug will return to the parade route, not walking and throwing candy, but riding in style in a convertible as the grand marshal.

“I don’t know if I can handle all the hoopla,” Krug said. “I kind of like to stay below the radar.

"I know I'm kind of flamboyant when I come by (delivering mail). But that's all in the blue (of his USPS uniform). This grand marshal thing … I will never have so many friends again in my life as I will on that Saturday. I’ve got goosebumps.”