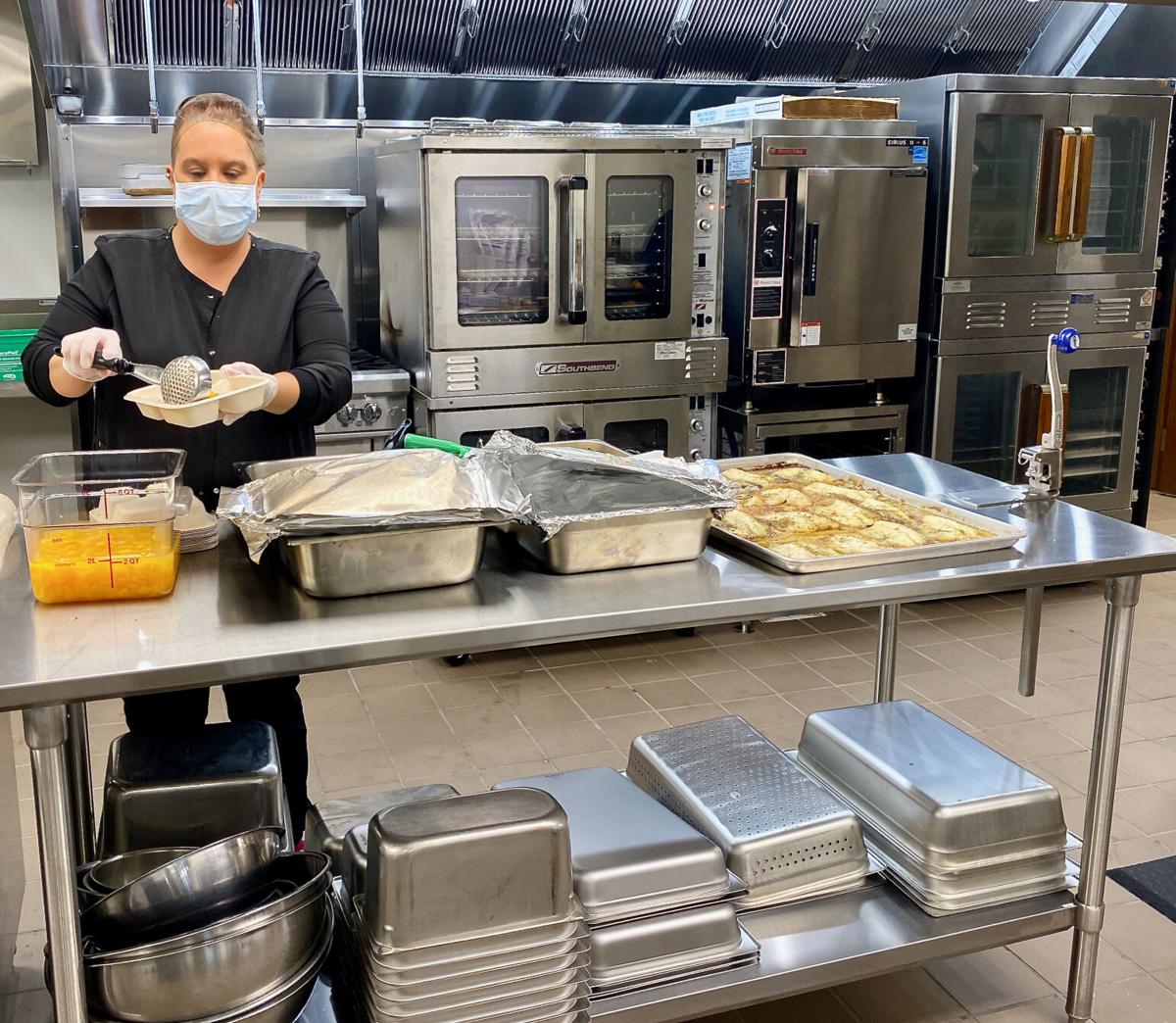 Sara Johnson, a senior cook for the LSS Meals program, prepares a meal for home delivery in the new commercial kitchen at Zion Lutheran Church. The church partnered with Lutheran Social Service on the project, and the kitchen opened for business Aug. 13. 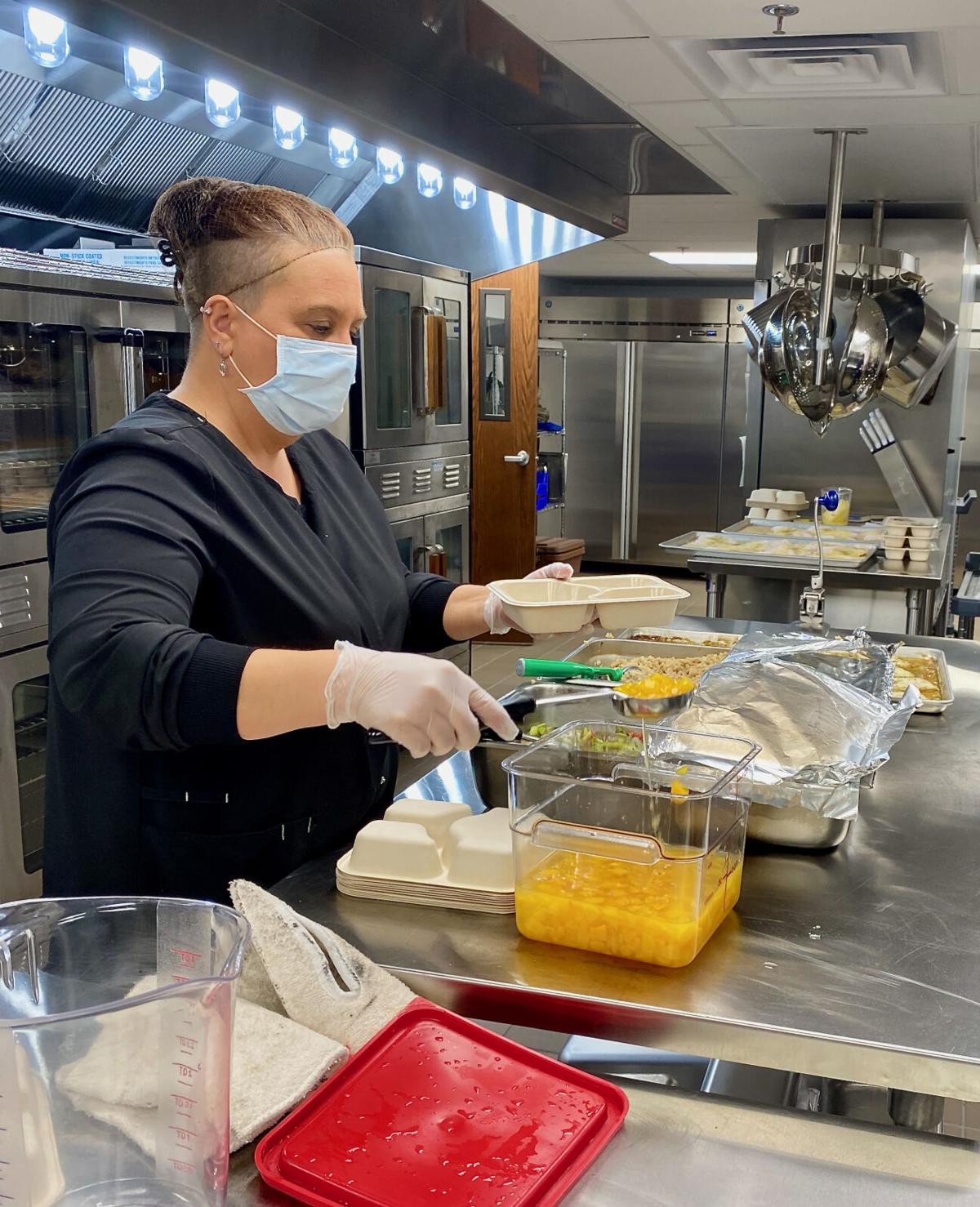 Sara Johnson, a senior cook for LSS Meals, dishes up a meal for the senior nutrition program. 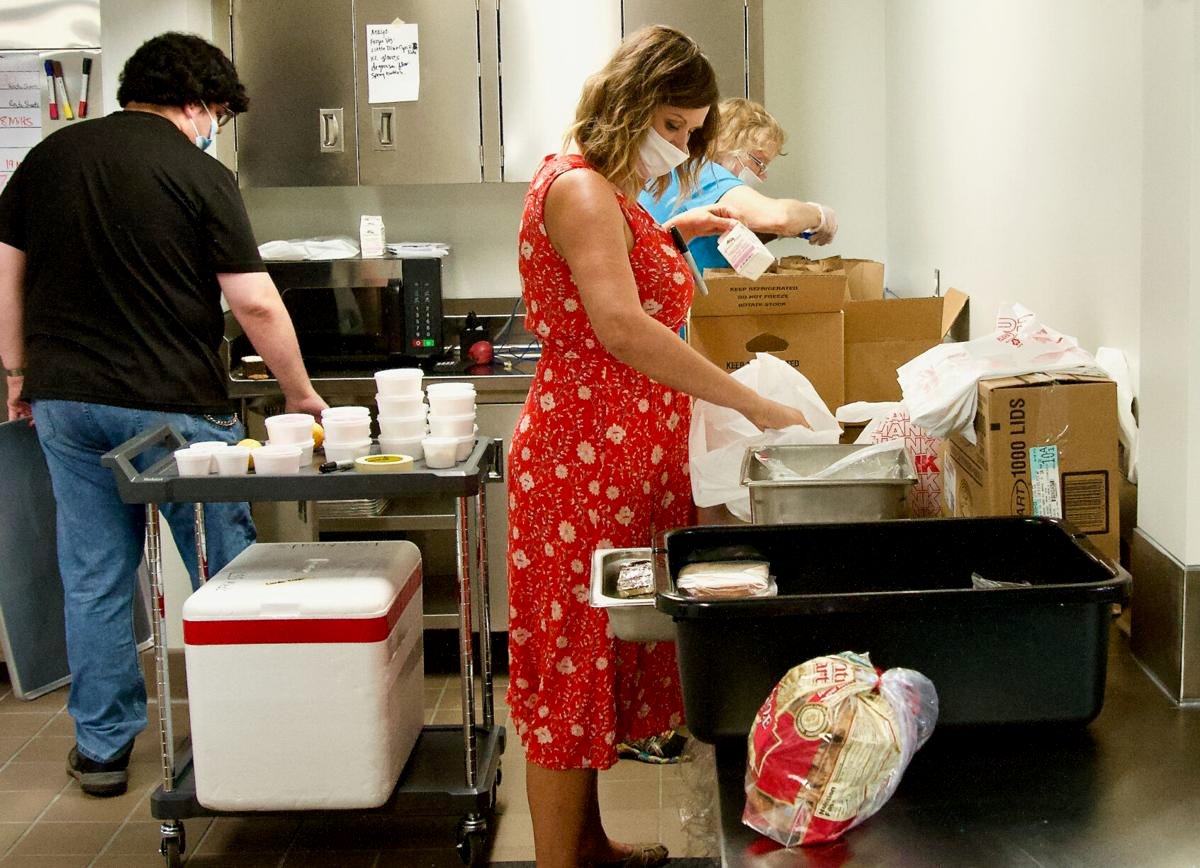 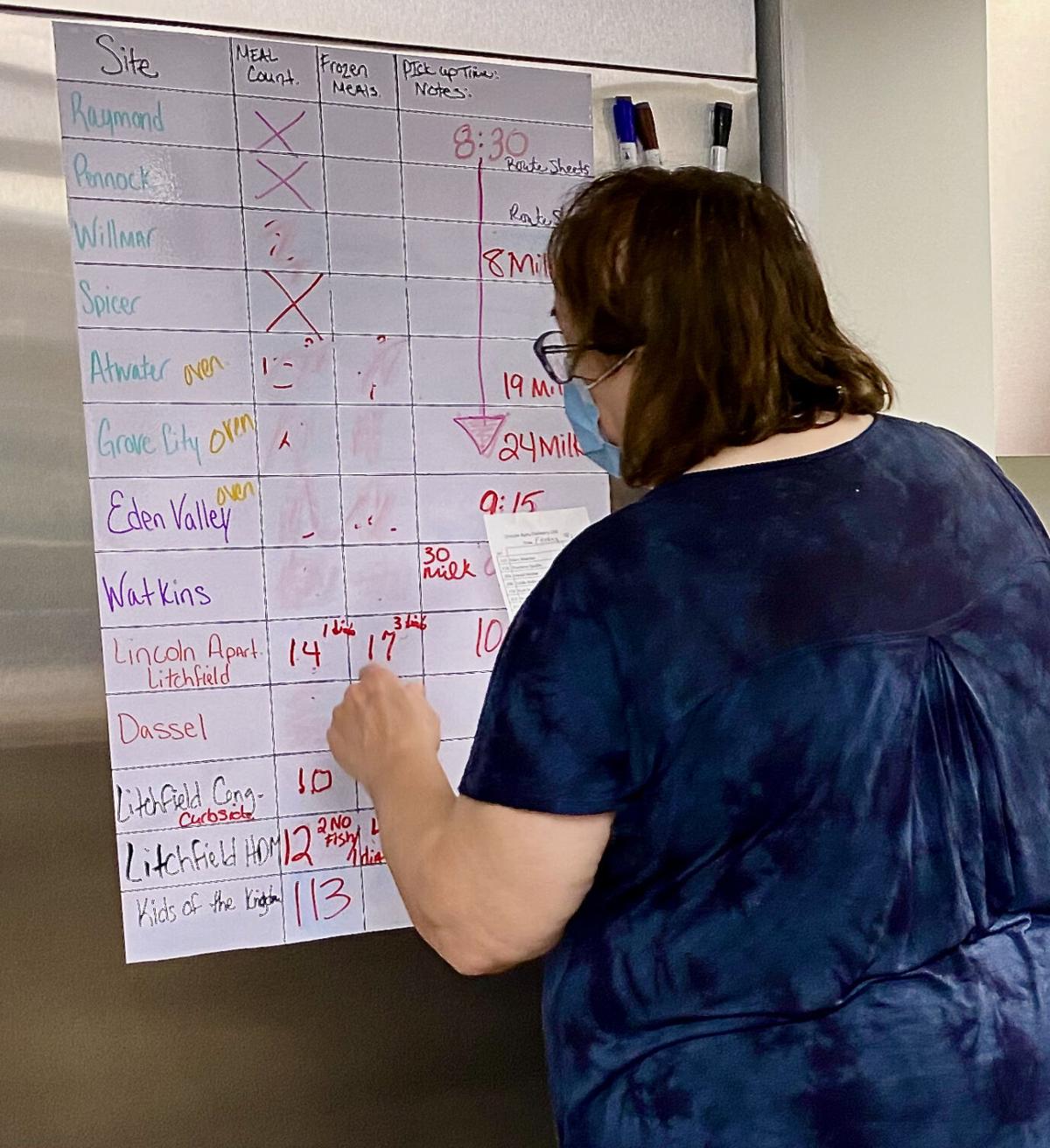 Zion Lutheran Church members serve a variety of volunteer roles for LSS Meals, including keeping track of meal counts at various senior dining locations throughout Meeker County to which meals are delivered from the Litchfield site. Organizers hope to have other community members volunteer for the program, as well. 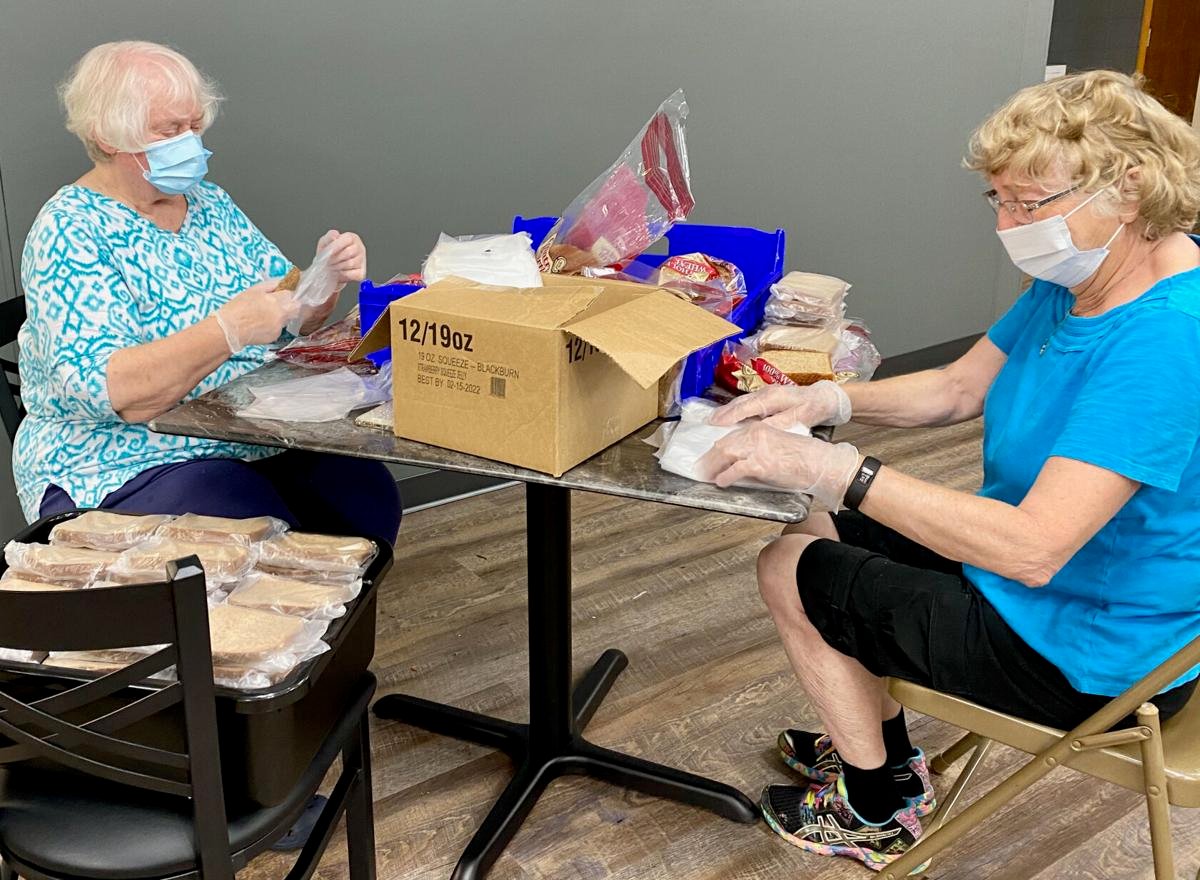 Sara Johnson, a senior cook for the LSS Meals program, prepares a meal for home delivery in the new commercial kitchen at Zion Lutheran Church. The church partnered with Lutheran Social Service on the project, and the kitchen opened for business Aug. 13.

Sara Johnson, a senior cook for LSS Meals, dishes up a meal for the senior nutrition program.

Zion Lutheran Church members serve a variety of volunteer roles for LSS Meals, including keeping track of meal counts at various senior dining locations throughout Meeker County to which meals are delivered from the Litchfield site. Organizers hope to have other community members volunteer for the program, as well.

It started as a question.

When committee members who have overseen construction of a commercial kitchen at Zion Lutheran Church talk about the project, they say it all started with a question about food service needs at Kids of the Kingdom, the child care center based at the church.

The answer quickly became larger and more complicated than the initial question. And, in a sense, the answer continues to evolve.

“That question just kind of begat more questions,” said Bridget Lux, a committee member. “Like, ‘Wow, how would we accomplish that…. (Y)ou know, it’s just, that’s such a big question.

“But we decided to turn it into more of an aspirational conversation, like, well, what if we had a commercial kitchen? What might we do to serve our community?” Lux said. “There were 10,000 good ideas.”

And further down the road — once COVID-19 protocols allow — committee members hope the kitchen and its accompanying dining area becomes a kind of multigenerational café, where senior dining clients and children from the child care center dine and bond together. The facility fits for what LSS Meals calls its Community Bistro Dining Site.

“You know, food is an end to itself, but it’s also a means to an end,” Lux said. “So the other piece of it here is relationship building, community building. We’re so excited to finally get to that time. I don’t know what it might be, but someday, we’ll be able to dine together again.”

LSS Meals has provided about 200 meals per week to Litchfield residents, and expectations are that number will grow to 1,325 with the new kitchen. The meals are designed by a licensed, registered dietitian to provide healthy and nutritious meals for older adults and are available through community dining sites and home-delivered options, as well as drive-thru meal pickup options. LSS Meals serves 163 communities in 39 Minnesota counties.

Litchfield’s senior nutrition site had been at Litchfield Civic Arena, but the kitchen there was showing its age.

Marilyn Meline, a member of the Zion congregation, worked at the LSS site at the Civic Arena when the conversation started about the church’s kitchen in December 2017, and was well aware of the site’s limitations.

“We say the God moment was Marilyn … was at the Civic Center in the name of Zion partially,” Lux said. “And that created this connection with Lutheran Social Service.”

Soon the church and LSS began discussing a potential partnership, and “the conversation took on a whole new flavor.”

The Civic Arena kitchen was outdated and needed repair, while Zion’s kitchen “was on hospice,” Meline said. “We had so many issues that we needed to do something. And when LSS was willing to partner with us and contribute to bring in equipment, it just seemed like a good partnership.”

LSS had not used the kitchen at the Civic Arena for quite some time, and had instead been contracting with area caterers to prepare meals. Contracting with an outside provider added cost to the program.

“So that was another thing that spurred it on, to having a kitchen in Meeker County, because there were sites around us, (in addition to) Litchfield, we all needed a way to cook the meals more efficiently,” Meline said. “That was another reason that it was just perfect timing. It all seemed to make sense.”

In addition to what the new kitchen might mean to operational efficiency for the LSS Meals program, committee members saw the project as meeting a kind of spiritual mission.

“From Zion’s perspective, as this thing started to coalesce, and we started to have an actual project that we were faced with needing to do some fundraising, I think we just saw that this met our mission,” Lux said. “It was a way for us to walk in our neighborhood … walk with our neighborhood maybe is the better way to say it.”

But before moving ahead with the project, committee members needed to take the plan to the congregation for approval. After sharing the concept of the kitchen with the congregation, a vote was scheduled for Dec. 28 last year.

The vote on the project, which committee members said was somewhat controversial due to the significant change it would bring to the physical church but also its mission, was not as close as some expected it to be. Due to COVID-19 social distancing, the congregation met in the parking lot, listening to the question on car radios and casting ballots on a cold day at the end of December.

“We decided we needed to do a congregational vote with a quorum, because this is kind of changing the trajectory of our ministry here at Zion,” committee member Missy Brock said. “I remember sitting out there thinking, ‘Oh, I hope we get, what is a quorum?’”

They counted only about 20 cars in the parking lot as the meeting time approached.

“And then, all of a sudden, we look out on Fifth Street, and the cars are backed up bumper to bumper,” Brock said. The stream of cars turning into the parking lot, stretching at least three blocks west from the church, validated the committee’s perspective about the significance of the project.

“We couldn’t start (the vote) on time, because so many people had to get parked,” Brock recalled. “But the cool thing, even cooler thing, was that that many people came, because the life and ministry of this congregation is important to them. It was pretty exciting. Overwhelming.”

The affirmative vote launched a months-long project to transform the kitchen and dining area that was complicated by COVID-19, miscommunication and other logistical challenges. They had custom-made appliances arrive that were the wrong size, furniture damaged in shipping and numerous other mishaps — obstacles that committee members can now share a chuckle about — that forced a projected June opening to be postponed to mid-August. But on Friday, Aug. 13, the kitchen was ready for its first run.

By all accounts, it performed to expectations, with LSS Meals staff, along with volunteers from Zion, preparing and packaging 372 meals for delivery. The number was larger than what originally was expected as the Zion kitchen provided meals for parts of Kandiyohi and McLeod counties as kitchens in those areas are under repair.

“We are thrilled to be partnering with Zion Lutheran Church,” said Chrissy Elton, regional manager for LSS Meals. “We’ve been working with volunteers from the Zion Lutheran Church community for several years already through our LSS Meals service in Litchfield, and they are amazing. We love working with them and are so excited to see how the Community Bistro Dining Site grows to become a great resource to the community.”

“This is kind of out in the vision,” said Cathy Haugo, another committee member. “We’ve talked about doing special events, and we’ll even open it up to the community of stay-at-home moms with preschoolers can come in and have a meal, and the grandparents.”

There’s something about how food nourishes the body and the spirit, they say.

“We’re just building on tradition,” Brock said. “I mean, we’re standing on the shoulders of people who valued food and kitchen and church. I think it’s a fresh new way … but we’re only here because of them.

“There’s nothing like sitting around a table over food, that builds community,” Brock added. “I think it’s gone hand-in-hand from the beginning of time, right? And food has always been part of what our church is all about.”

Why: Zion Lutheran Church partnered with Lutheran Social Services to build a commercial kitchen at the church, which will serve as a meal preparation site for all LSS Meals locations in Meeker County.

Bridget Lux of Zion Lutheran Church said that volunteers from the community are welcome to get involved. The Community Bistro Dining Site offers a wide variety of opportunities to help people feel welcome, prepare or package meals and deliver them to older adults in the community. To volunteer, contact the church at 320-693-3207.