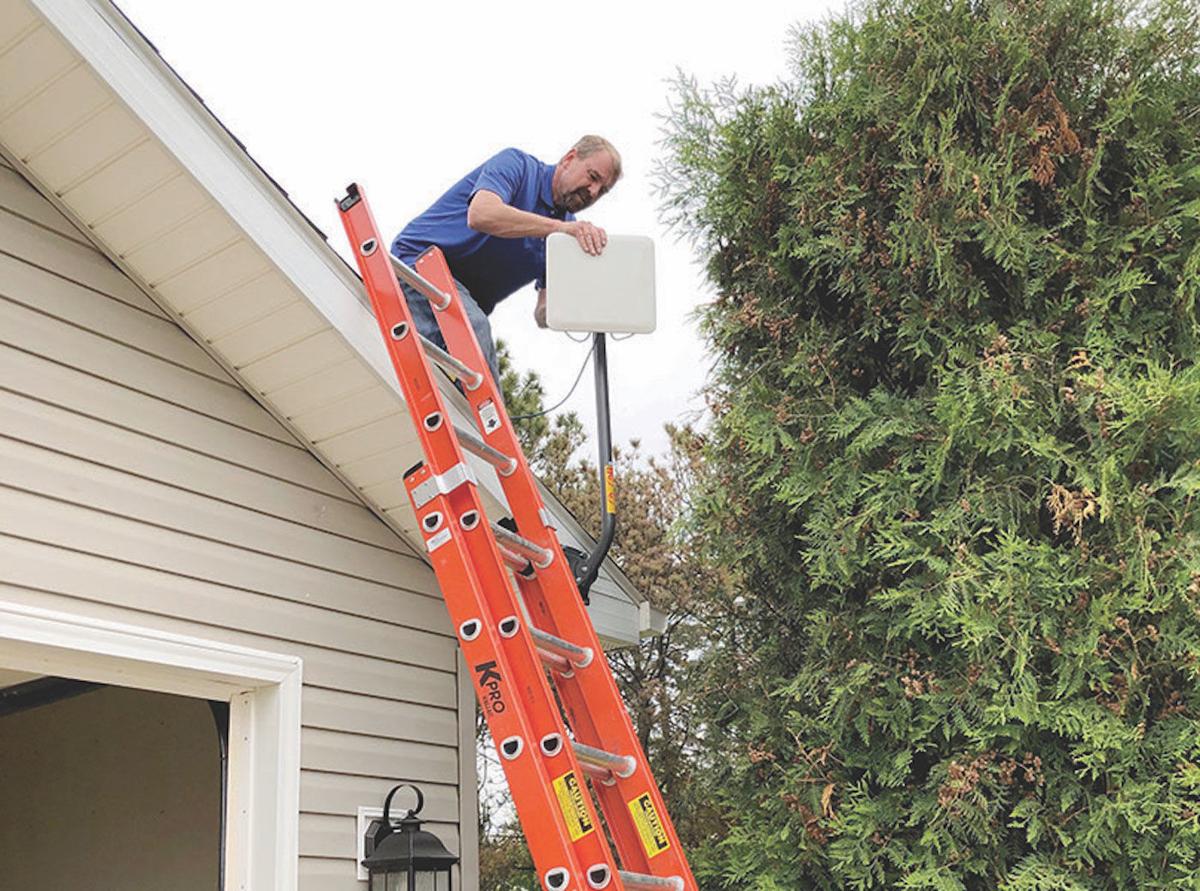 Installer Scott Ernst makes a standard fixed wireless installation with a J-arm on a Meeker Cooperative member’s home, setting up for the start of Vibrant Broadband service. 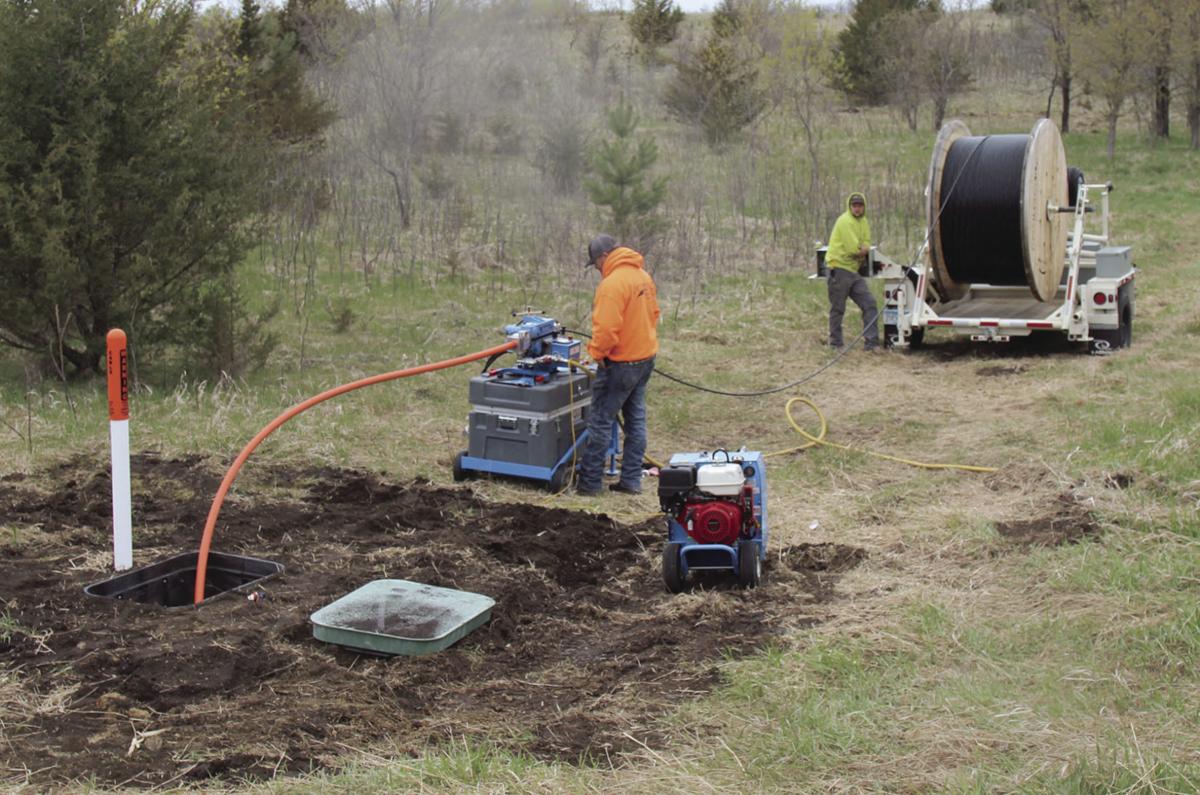 Orange interduct runs underground and fiber optic cable is blown into the protective interduct and connected to each of Meeker Cooperative’s substations and monopoles throughout the cooperative’s service territory. 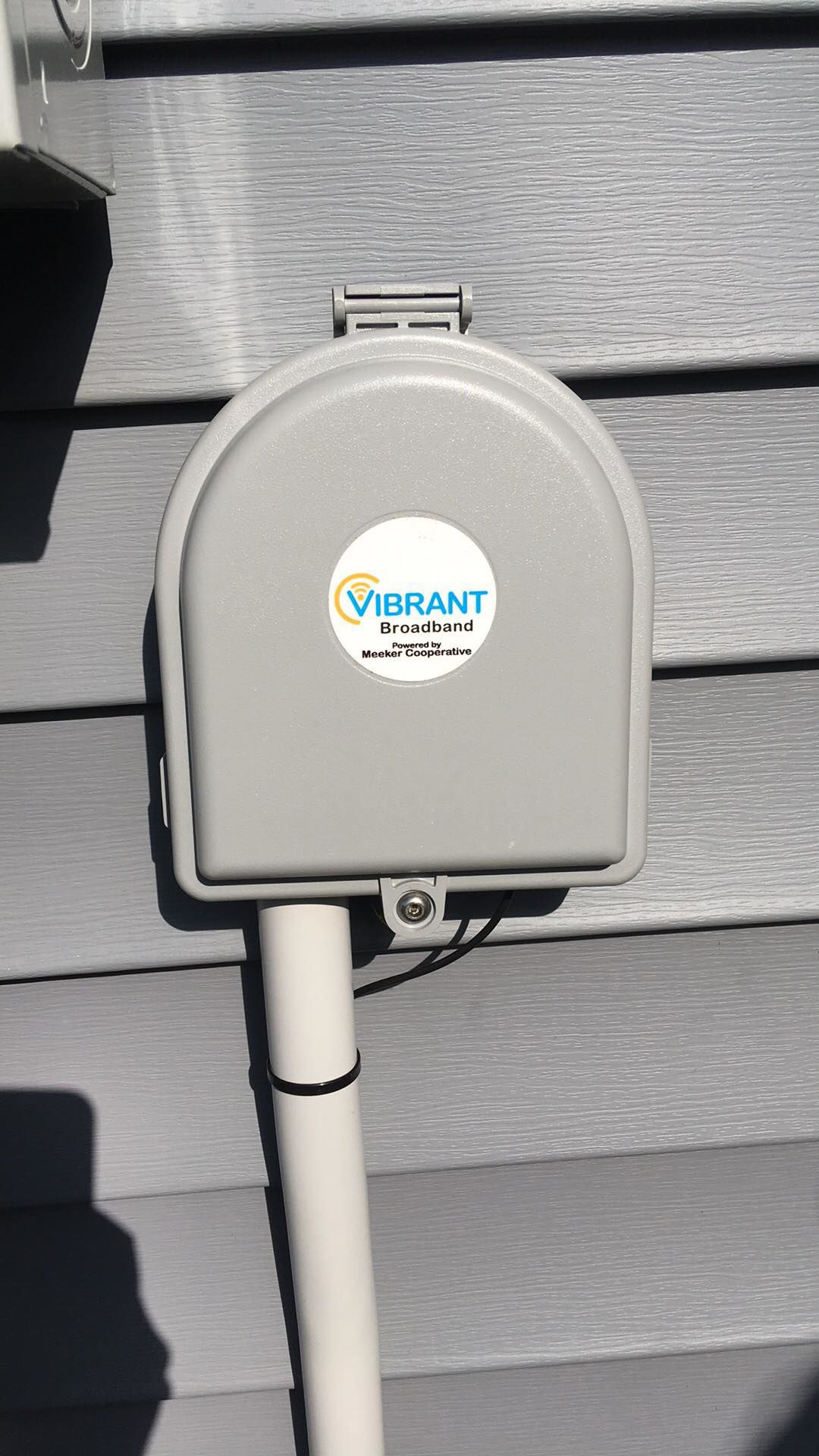 Installer Scott Ernst makes a standard fixed wireless installation with a J-arm on a Meeker Cooperative member’s home, setting up for the start of Vibrant Broadband service.

Orange interduct runs underground and fiber optic cable is blown into the protective interduct and connected to each of Meeker Cooperative’s substations and monopoles throughout the cooperative’s service territory.

Chuck Mitchell of Darwin depends on a speedy internet connection so he can download large aerial photos from home, as part of his job as a land surveyor for Northstar Surveying.

His previous provider cost $83 a month and it was slow, he said. But around Aug. 1 Mitchell connected to Vibrant Broadband — a service provided through Meeker Cooperative Light & Power — and detected a progressive change.

“Now with the fiber direct to my house is a game-changer,” Mitchell said. “The speed is really fast. My wife (Nikki Mitchell) noticed the speed right away. We are paying $4 less a month for not quite two times the speed.”

High-speed internet — or the lack thereof — is an issue in many areas of rural Minnesota. In fact, some surveys say that one in five rural homes lack access to high speed internet.

Meeker Cooperative looked to change that in its service area, which includes Meeker, and parts of McLeod, Kandiyohi, Stearns, Wright and Renville counties, when it announced in November that it had begun installing a fiber optic backbone, connecting its 14 substations throughout the county to provide Vibrant Broadband. As of late June, 46 of 47 monopole bases for the fixed wireless system had been installed, 26 of which have been completed. The remaining sections have been added and at their designed height of 120 feet. The technology delivers voltage optimization, conservation voltage reduction, loading management capabilities, distributed automation and outage management improvements, according to Tim Mergen, Meeker Cooperative CEO/general manager.

Meeker Cooperative has provided advanced technology – like the electricity back in the 1930s – to areas in Meeker County for decades. Vibrant Broadband is the latest example as it gives rural Meeker County residents access to the kinds of super-fast service to which city dwellers are accustomed.

“When it comes to the internet, it’s all about the speed,” Mergen said. “No one wants to sit there watching the little circle go around and around while something is being downloaded. Maybe that little circle needs to become the emoji for frustration.”

Darwin and Dassel were the first towns in the cooperative service area to receive the new technology, on July 1. Monopole bases are being grounded for the wireless system, Mergen said.

“Once this is done, electricity and fiber optic lines need to be brought to each pole and additional equipment installed. This is an on-going process,” he said.

A reliable internet connection is essential for Kim and Ken Renner, who live northeast of Litchfield. Kim operates a childcare business from home, and Ken is a software developer.

“I … have to submit some daily record-keeping items to the Federal Food Program,” Kim Renner said. “It never failed that my internet before would kick out just as I was trying to submit, or it would time-out. So much frustration that I don’t have any longer. My husband is able to actually work from home sometimes, too, with this faster and reliable service.”

Meeker Cooperative selected the Renners as part of a beta testing group in June, she said. The Renners also had a 60-foot tower they purchased previously, so transitioning to Vibrant Broadband cost them a one-time installation fee.

The build-out process has not pleased everyone. Cutting down trees to make room for electric utilities is disconcerting to Debbie Koehler of Dassel.

“I am sour on the idea of looking at an ugly pole out my front door,” she said. “And they (Meeker Cooperative) can’t place it on the adjacent lawn behind the butt ugly electric utilities. We are not sure we want to uglify our property with three views being sullied with utilities and tree loss.”

Providing high-speed internet service to the whole county is estimated to take two years, Mergen wrote in a column in the cooperative’s newsletter.

“For the entire project we anticipate the need for about 1,200 different easements,” he said. “Writing them for each parcel of land, contacting the landowners, meeting with them, getting the landowner signatures, getting them notarized and then filing them in the appropriate county courthouse takes a good deal of time.”

About 95 percent of cooperative members contacted have granted the co-op an easement to either hand the fiber optic line from the existing pole or to install it underground.

The Koehlers currently receive internet through CenturyLink. The service was decent at the outset, but the past three years they have experienced problems, Debbie Koehler said.

“Lots of buffering or no service,” she said. “Many interruptions from (the) construction of the broadband service. Costs have increased and customer service has diminished.”

“Obviously, there is much construction left to complete this year,” Mergen said in a news release.

But the work has caught the attention of state officials. Gov. Tim Walz is scheduled to visit Meeker County for a ribbon cutting ceremony for Vibrant Broadband in late September.

“Meeker Cooperative’s Vibrant Broadband has created interest at the governor’s office,” Mergen said, “and within several of the state agencies, and the governor is coming out for a first-hand look.”