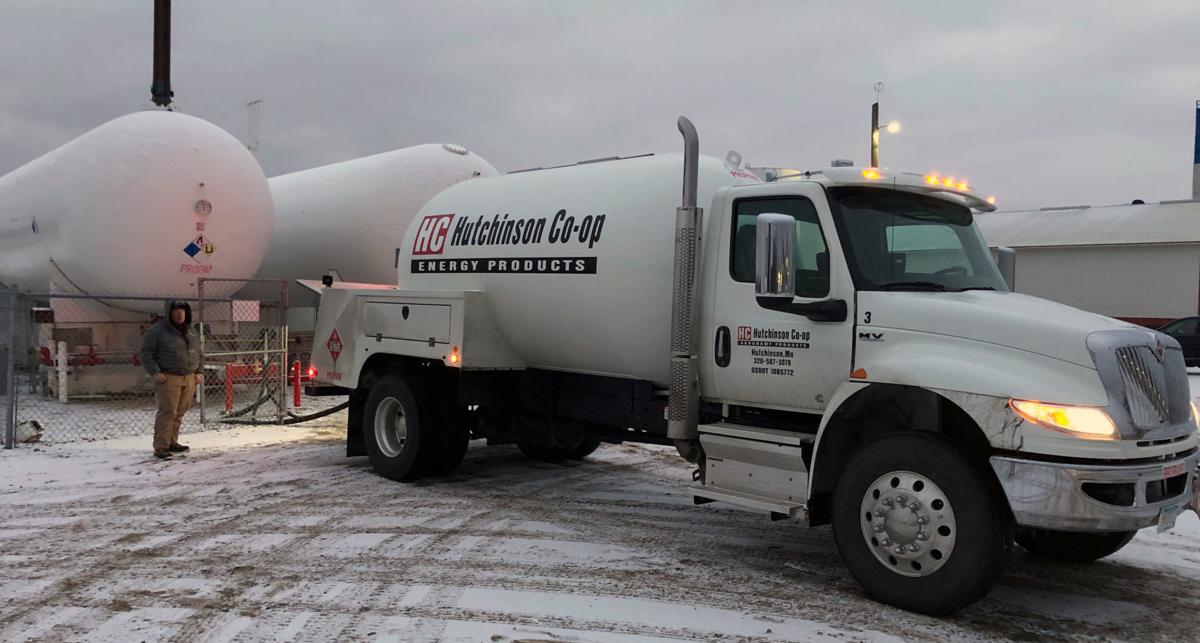 Local dealers such as Hutchinson Co-op haven’t been able to fetch enough propane to meet a high demand, resulting in rationing.

As one problem snowballs into another, Minnesota farmers, propane dealers and many residents are caught in a balancing act.

A wet spring pushed planting back further than usual and harvest to late October and November. With moisture levels breaking records in Minnesota this year, farmers need more propane to dry crops, and unseasonably cold weather more than 10 degrees lower than usual makes the demand all the higher. Meanwhile, propane is needed to heat homes and barns more than usual as low temperatures matched or beat records around the state following a recent cold snap.

Temperatures were consistently below freezing in in the region through midweek last week, according to the National Weather Service.

Brian Thalmann, a Plato farmer and past president of the Minnesota Corn Growers Association Board, said propane is usually used to bring moisture levels down in corn from the high teens to the lower teens. He’s heard reports this harvest of moisture levels in the mid 20s.

While some fear the possibility of propane outages in the state, Mike Conner of the Hutchinson Co-op says the propane dealer is making it work by putting in more hours, making more trips and making sure everyone has just enough to get by.

“I don’t think we’re going to let people get cold,” he said. “We’re rationing it.”

Thalmann said farmers expect they may have to continue waiting a few more weeks to finish harvest.

“There has been a slowdown in harvest for a lot of people,” he said.

To ensure he has enough propane for drying his crops, Tom Haag’s supplier has had to travel to states as far away as North Carolina. But for the most part Haag, who operates a 1,600 acres of soybean and corn farmland in the Eden Valley area, has been lucky.

“As of right now, we have been able to get enough propane to continue to stay dry,” Haag, board member for the Minnesota Corn Growers Association, said Monday. “But I know it has affected some other areas in the state and in other states. They were there this morning to fill us up again. So things are getting a little better, but it’s still tight.”

Minnesota isn’t the only Midwest state facing a propane shortage, leading governors to issue orders lifting shipping regulations. Minnesota Gov. Tim Walz made such a declaration Oct. 30, hoping to allow drivers and carriers to haul more propane where it is needed.

“This has been a stressful year for Minnesota farmers,” Walz said. “The recent wet weather has only exacerbated these challenges to create the unprecedented crisis we now face, with crops sitting unharvested in soaked fields and truckloads of product that can’t be brought to market.”

The Minnesota Propane Association reported shipping record amounts of propane so far this November. Usually 190 loads of propane are shipped per day. This year, that amount is up to nearly 300.

“We are warming up 2-degree corn and 2-degree air to 200 degrees,” Conner of Hutchinson Co-op said. “Normally when this is done the second week of October, we have ambient air of about 60 degrees, and have corn at about 60 degrees. It takes up to 25 percent more (propane) to do the same job.”

But the problem, he said, has many more facets.

In 2014, pipeline operator Kinder Morgan halted propane shipments from Canada to Minnesota to ship a new product after 35 years of delivery to terminals in Benson. The pipeline hauled 40 percent of the state’s propane, and the change put a greater emphasis on other delivery methods, namely by train.

“They bring propane by rail cars and unload,” Conner said. “That becomes the major distribution points for companies like (Hutchinson Co-op).”

The closest is Rockville, which is west of St. Cloud.

“Even when those rail terminals work at peak efficiency, it’s like a hundredth of what you can push through a pipeline,” Conner said. “There is a limit to how many rail cars you can load in a day. So on years like this, the system is always going to have a breakdown. We can’t replace those lost gallons.”

Trucks driving further to St. Paul, Mankato or Benson to load propane from pipelines have other problems to deal with as well. Nebraska and Iowa are ahead of Minnesota on pipelines, and those states have had record fall yields.

“They are taking all the gas,” Conner said. “The pipe for the past week has been operating slowly on line pressure. There is very little gas making it up.”

He said that under the best conditions, each location might be able to fill six trucks in an hour. Now, two terminals might collectively fill four or five in an hour. Meanwhile, trucks from businesses that sell primarily for home use and agriculture use compete for a place in line.

Timing has added to the tension of competing needs.

“Moneys for fuel assistance are not released until Nov. 1 each year, so it creates another ‘harvest,’” Conner said. “It’s filling homes of low-income people that have been waiting probably with near empty tanks or empty tanks for assistance to kick in. Normally you don’t have that overlap. Normally corn harvest is wrapped up by Halloween.”

Hutchinson Co-op is anticipating another few weeks of continued high demand between agricultural needs, and the need to stay on top of dangerous overnight temperatures. In the meantime, it is keeping careful track of propane in each tank it services, and instead of filling the tanks it makes sure to resupply enough to maintain each need. But that approach takes more trips and more work.

“Each trip costs us money,” Conner said. “It costs us man hours, it costs us fuel, wear and tear. So there is going to be an efficiency drain on a small dealer like Hutchinson Co-op. … We are effectively filling their daily consumption, we are keeping them running.”

For many farmers, the shortage is just one more problem added onto a year of uncooperative weather, low commodity prices and rising costs.

“Every time we turn around there is another problem or trade or markets,” Thalmann said. “It’s one hit after another.”

— Sarv Mithaqiyan contributed to this story.

Sarv Mithaqiyan contributed to this story.

“Every time we turn around there is another problem or trade or markets. It's one hit after another.”