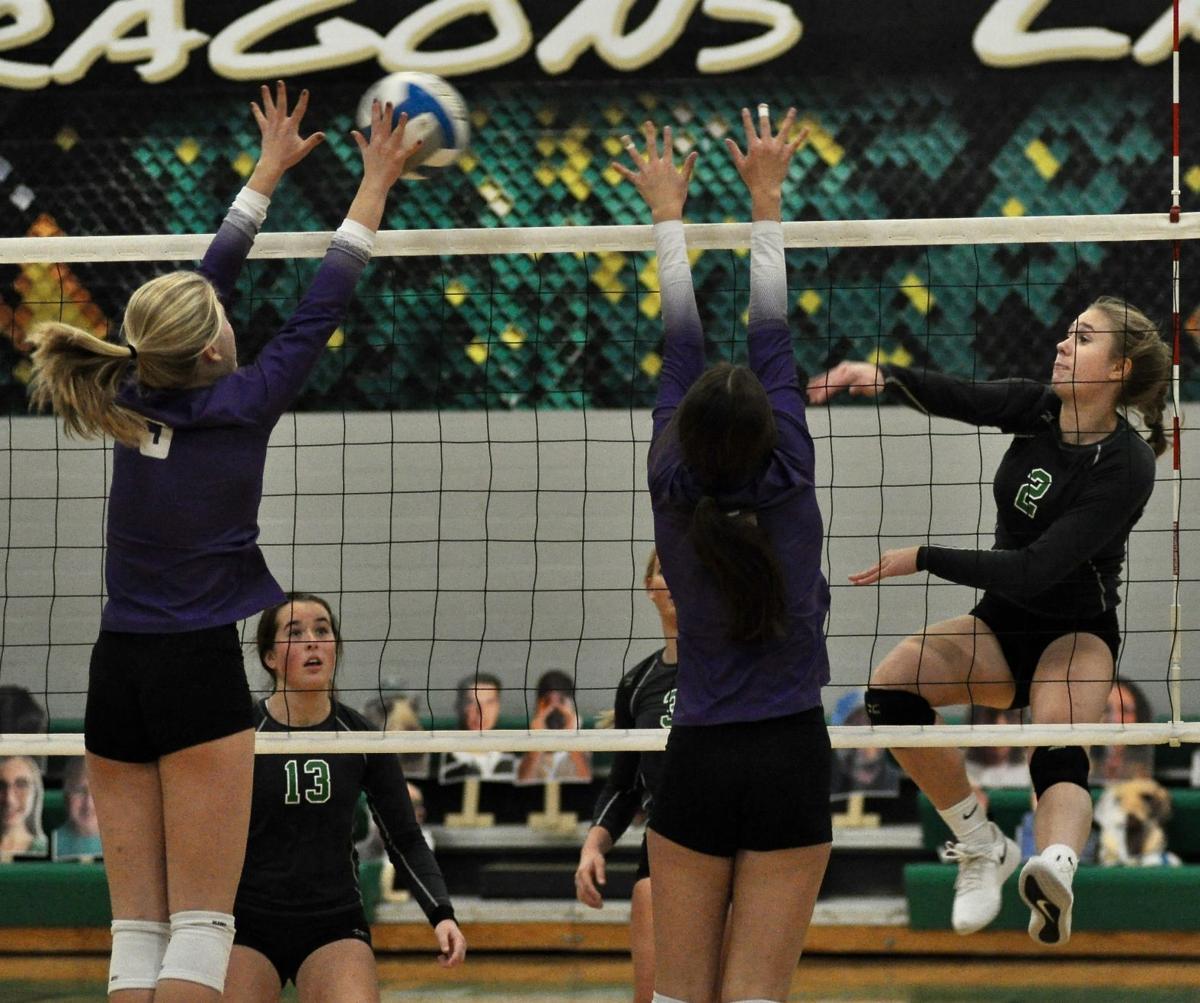 Litchfield outside hitter Lilly Osterberg tries to knock a shot past two Glencoe-Silver Lake blockers. Osterberg finished with 16 kills to help the Dragons to a four-set win Friday. 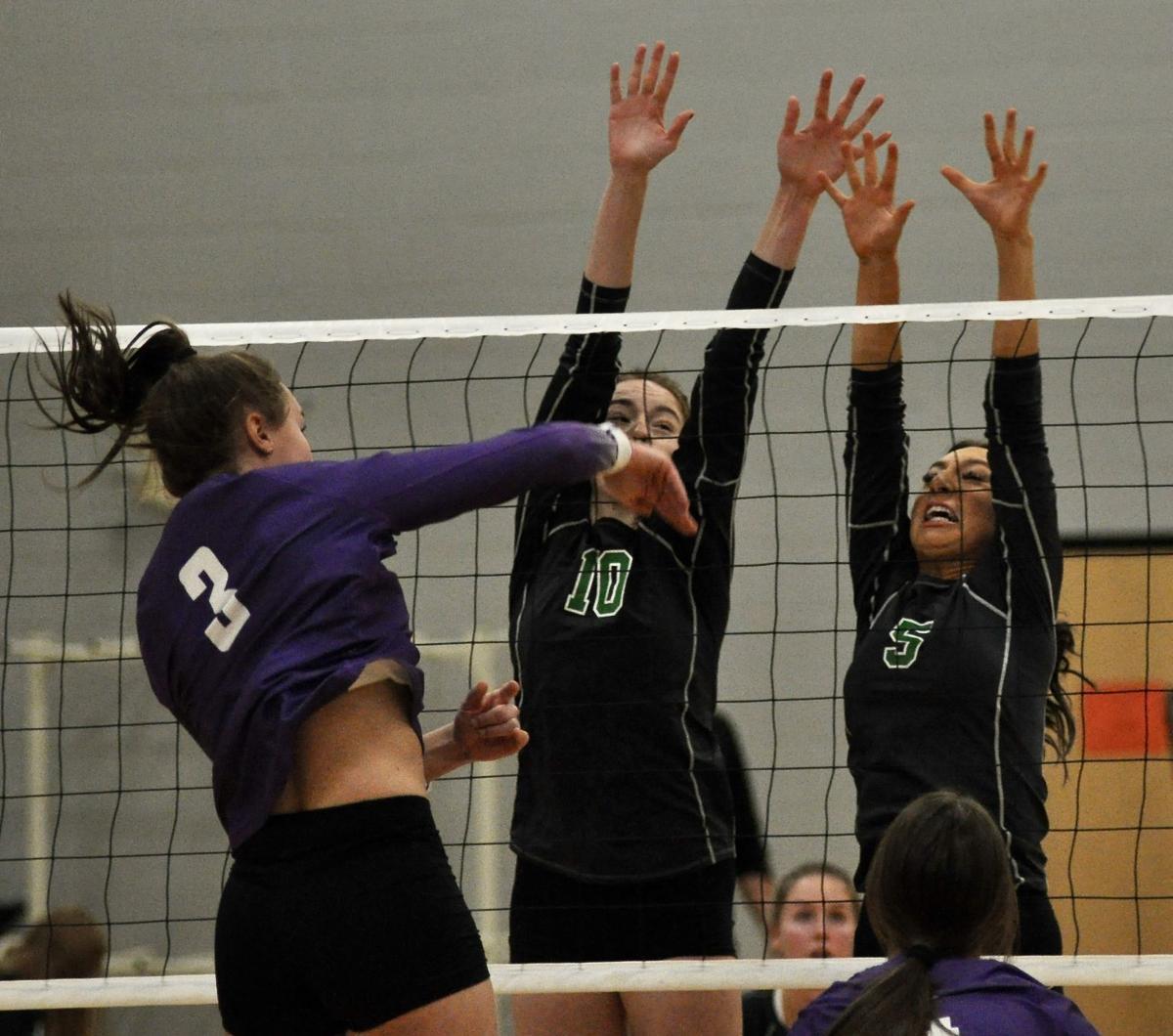 Litchfield outside hitter Lilly Osterberg tries to knock a shot past two Glencoe-Silver Lake blockers. Osterberg finished with 16 kills to help the Dragons to a four-set win Friday.

Litchfield has built a strong record this volleyball season by distributing its offensive attack among several players.

Last week, the Dragons ran into a team with a different approach, and it led to a slow start in a pair of matches. But in both cases, Litchfield responded well, downing Glencoe-Silver Lake twice as it improved to 9-2 overall.

“GSL is a good team with one very dynamic player,” Litchfield coach Darin Swenson said as he explained the Dragons’ slow start in a 3-1 win Friday. “I think (Miah) Monahan had close to 30 kills tonight. And when you have a player like that, sometimes you get a little shell-shocked and you play a little tight.”

It certainly seemed an apt description of the Dragons’ 25- 17 loss in the first game of the match. And Monahan continued to be a force throughout the match, but Litchfield figured out a way to compensate as it won the next three games and the match, 25-17, 30-28, 25-13.

“We were on our heels,” Swenson added. “We were reacting rather than being proactive. But after that first one, we settled into it and we got some good plays early in that second game that gave us some confidence.”

Osterberg’s big numbers were a bit uncharacteristic for the Dragons, who have relied on a balanced attack that keeps opponents wondering where the hit will come from.

“She’s been swinging well,” Swenson said of Osterberg. “We’re not always going to see those numbers, because we try to distribute the ball pretty consistently or pretty evenly. But your outside hitters, by nature, are going to get more sets, so they’re going to get more opportunities.”

Middle hitter Rachel Foley, also a senior, collected nine kills for the Dragons Friday, followed by outside hitters Sydney McCann, a senior, and sophomore Greta Hansen, who both had seven kills. Senior Kristin Foley finished with five, and junior Kaity Kusler had four.

Hansen’s blocking ability also played a major role in helping the Dragons combat the Panthers’ Monhan, as she finished with five blocks in the match.

“A couple of things we’ll do if (the opponent) has one kid that’s really solid … we’ll commit to the block,” Swenson said. “We practiced for it this week. We did some scouting, and she gets 50 percent of their sets. And when she’s in the front row, she’s getting like 90 percent of those sets. So we know the ball is going to her most of the time. So we’ll go and double block her and just make sure we have two people ready. She was good enough that she still powered it through that a lot, but in the fourth set I thought we did better. We pushed her back a couple times. So that was encouraging.”

Also encouraging, Swenson said, was the Dragons’ never-give-up approach as they scrambled to keep points alive.

“Sometimes all it takes is one play to get everybody charged up,” he said. “Tonight there were a couple at the end, I remember they sent a ball over and Greta kind of just dove at it and popped it up with one hand and that one goes on … and there’s a couple other plays, Kristin dove at one and kept it up. Lily hit one into the block but then dropped real quick and just popped it up and kept that one going.

That balance will be important for the Dragons as they head into the final two weeks of the season. They were scheduled to play a home match against Watertown-Mayer Monday after this edition of the Independent Review went to press, then travel to Watertown-Mayer Thursday.

They wrap up the regular season by traveling to New London-Spicer Nov. 24.