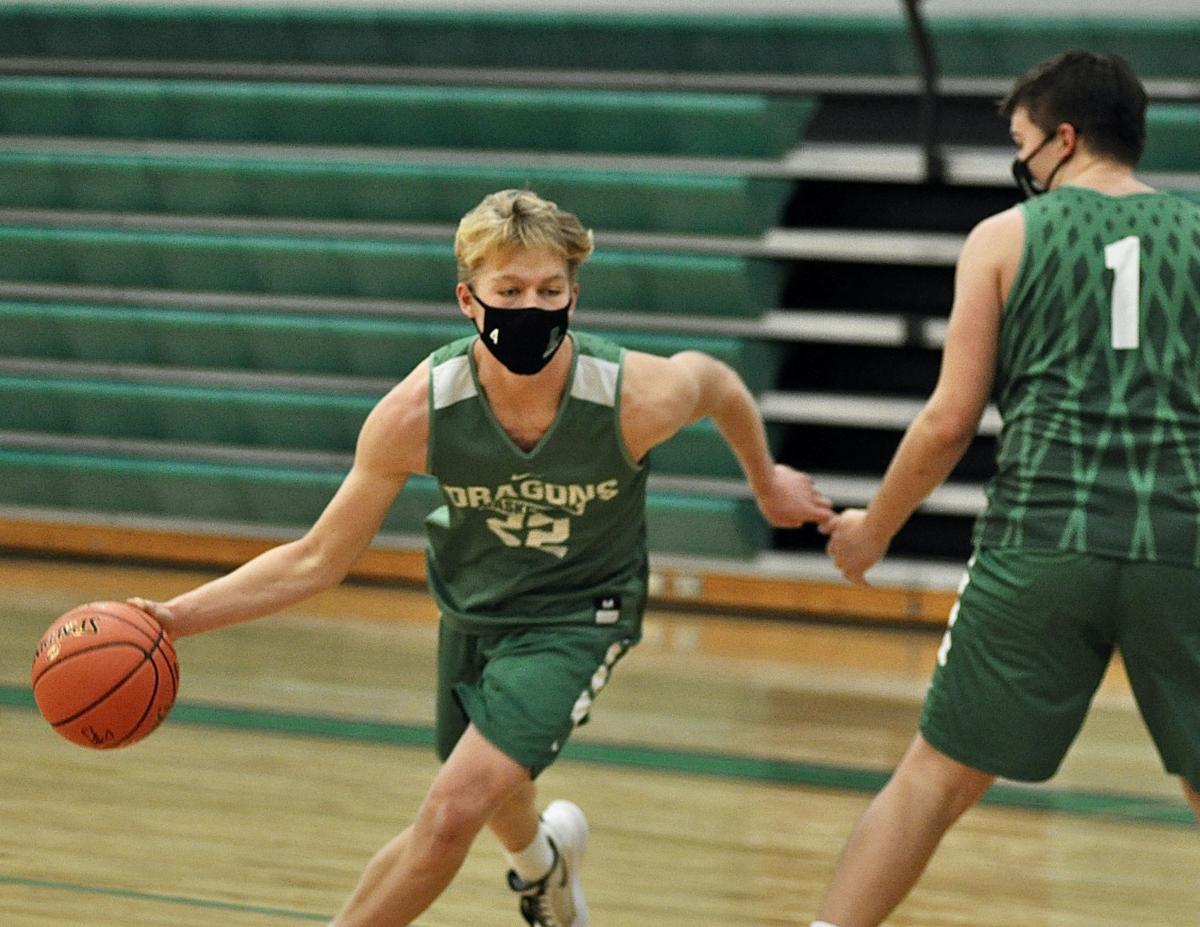 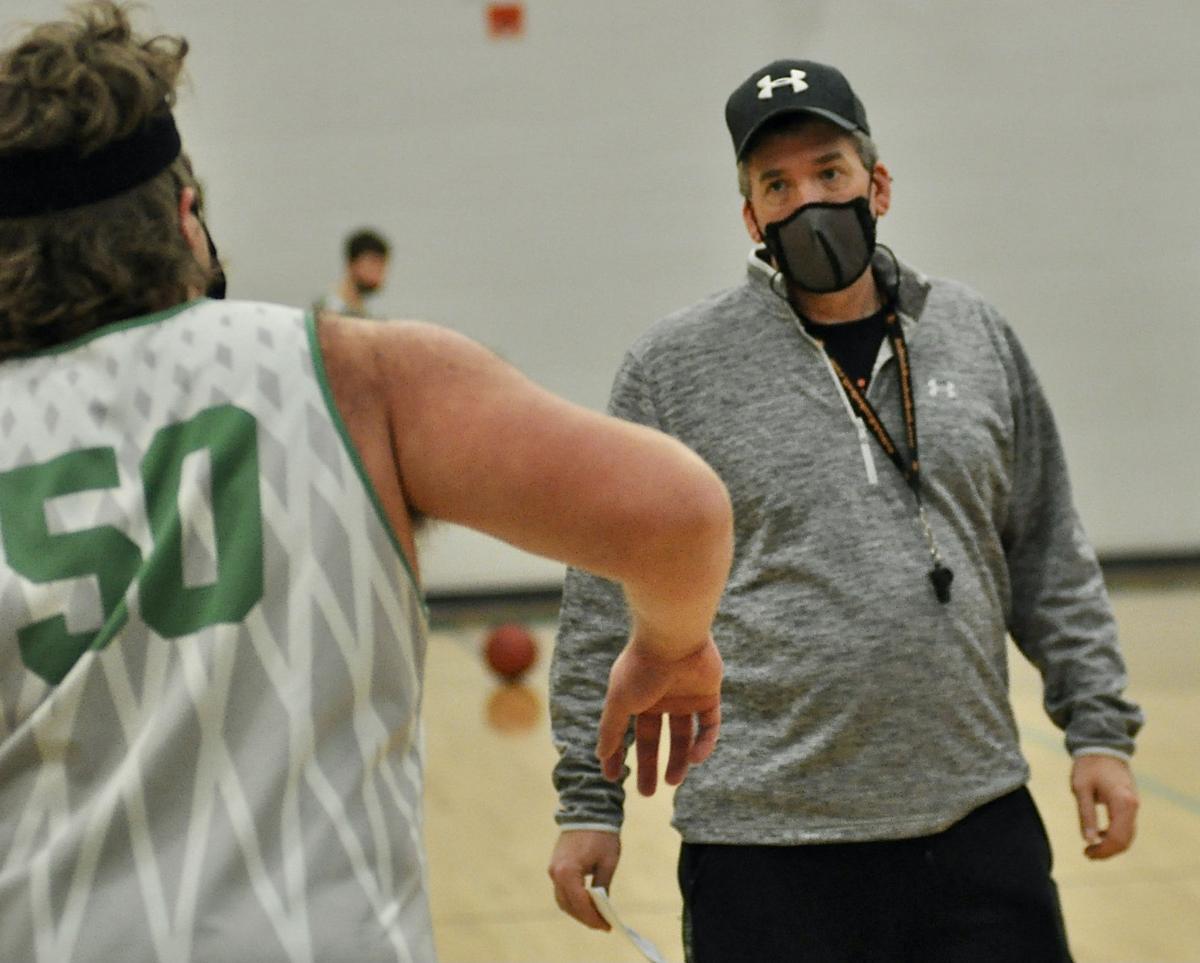 Matt Draeger is in his fourth season as head coach of the Litchfield boys basketball team after spending many years as an assistant in the program. 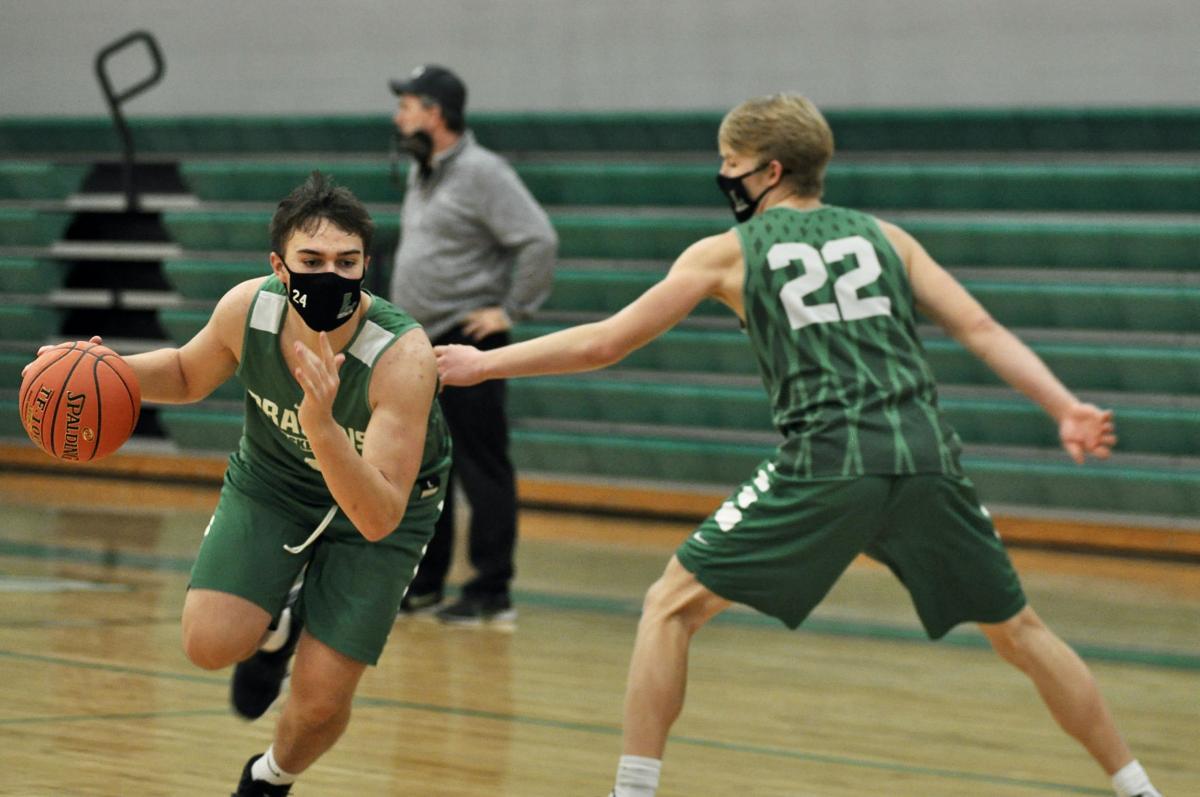 Junior forward Beau Weseloh drives to the basket during practice.

Matt Draeger is in his fourth season as head coach of the Litchfield boys basketball team after spending many years as an assistant in the program.

Junior forward Beau Weseloh drives to the basket during practice.

Excited doesn’t do justice to the emotions the Litchfield boys basketball coaching staff and players felt when they took the floor for practice the first time this season.

“I think everyone’s champing at the bit,” Dragons coach Matt Draeger said. “I think our kids were antsy.”

Practice doesn’t usually get that kind of reception, but after seeing the season’s start pushed back several weeks due to COVID-19 safety precautions, just getting back on the floor was a welcome change for the team.

“Obviously, the higher-ups did what they thought was right,” Draeger said. “But everyone got out of the routine. As I told my tennis team in the fall, when this all started, the bottom line is, what’s the alternative? The alternative is to not play at all. So you just have to roll with it. And we’re happy for the next day.

“One thing this whole thing has taught us is that, I think, is that you’re just happy with the next day that comes and you get the opportunity to do what you like to do.”

Certainly a valid approach. But the next practice, or even the next game, is just part of the story for the Dragons’ 2020-2021 season, which would have been highly anticipated even without the long wait to get it started.

Litchfield finished last season 18-10 overall, advancing to the Section 5AA semifinal before losing on a buzzer-beater to Maranatha Christian Academy.

Though they lost some valuable seniors to graduation, including one starter, the Dragons see six of their top seven players from last season return. Key among them are the starting point guard and the leading scorer.

“Anytime, you know, you return your points, I think that’s a good thing,” Draeger said. “I mean, it’s because that’s the hardest thing to learn how to do in this game, as a young player, is to learn how to score. And if you have people that know how to score, I think you always have a leg up, especially in a shortened season.”

Tyson Michels, a 6-foot-1 senior, returns as Litchfield’s “quarterback” on the floor, having been on varsity since he was a freshman and a starter since his sophomore season. Last year, Michels was second on the team in scoring at 11 points per game and led the team with 3.4 assists per game.

Adding even more comfort are two other returning starters — Drew Kotzer, a 6-foot senior guard, and Ben Alsleben a 6-1 senior forward. Kotzer averaged 7.2 points and 2.6 rebounds per game last season. He will miss some games early due to knee surgery, but Draeger hopes to have him back within a few weeks. Alsleben, a 6-1 senior forward, may be better known as the record-setting quarterback on Litchfield’s section championship football team this past fall, but he was a significant contributor both as a starter and one of the first players off the bench last season, when he averaged 5.7 points and 2 rebounds per game.

Other top returning regulars are junior center Dom Dietel and junior forward Beau Weseloh. At 6-4 and built like an offensive lineman — which he was this past fall on the Litchfield football team — Dietel gives the Dragons an inside force both offensively and defensively. The 6-1 Weseloh is a slashing forward who also has three-point range.

While he feels pretty good about the pieces that return to this season’s roster, Draeger knows he’ll need those players and more while playing a daunting schedule that includes teams like Wright County Conference East favorite Hutchinson — who Litchfield started the season against Tuesday night — and Wright County Conference West foes Annandale and Glencoe-Silver Lake. Late season non-conference games against Melrose and Minnewaska, which both return most of their lineup, should provide a good look at where the Dragons are as tournament time approaches, Draeger said.

“The month of March is actually loaded,” Draeger said. “There are some tough games.”

But after a long wait to get started, games of any difficulty are welcome, he admitted.